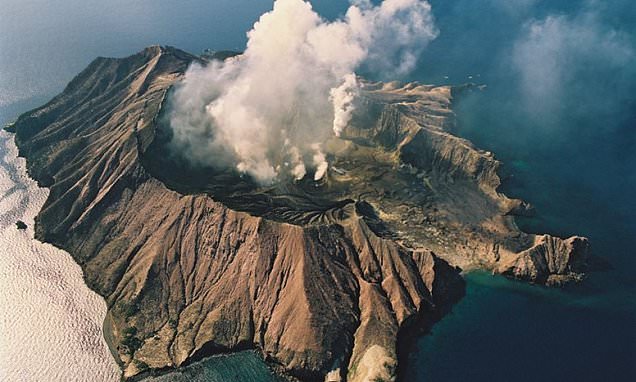 A tourist who was injured in the White Island volcano disaster has died hospital – bringing the official death toll to 17.

The victim, who has not been identified, passed away on Sunday night at Auckland’s Middlemore Hospital.

‘Police were advised of the death shortly before 11pm,’ Deputy Commissioner John Tims said on Monday.

‘The death of this person brings the official number of deceased to 17, 16 of whom died in New Zealand and one in Australia.’

Two people remain missing, while 26 are being treated in New Zealand and Australian hospitals.

New Zealand authorities said last Wednesday they believe the two bodies that remain missing after a deadly volcanic eruption last week have been washed out to sea and may never be found.

Police Deputy Commissioner Mike Clement said he believes a storm soon after the eruption washed the bodies down a stream and into the Pacific Ocean.

Dive crews on a police boat spotted a male body in the water near the island two days after the eruption.

He said the boat was able to maneuver within metres of the body but large waves prevented crews from recovering the body before it sank.

‘We are deeply sorry that we haven’t, until this time, been able to return those bodies,’ Clement told reporters in the town of Whakatane, near the volcanic island.

‘That has been our mission throughout, firstly to save people and then to recover people. It hurts us, and it hurts our people and it hurts everybody in this community when we don´t achieve that purpose.’