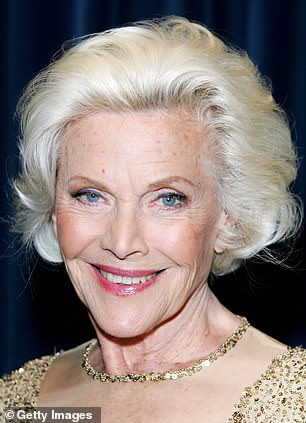 Thousands of Equitable Life policyholders will start 2020 with a celebration as the value of their pension pots will rise by around 70 per cent on New Year’s Day.

The one-off boost will give savers who have ‘with-profits’ plans an average extra payout of more than £9,000.

It is part of a scheme aimed at finally resolving the Equitable Life debacle – which ruined the retirement plans of a million middle-class savers – after almost two decades.

The near collapse of the world’s oldest mutual insurer in 2000 remains one of Britain’s worst financial scandals.

Thousands were hit, including former Bond girl Honor Blackman, who has said that nearly half of her pension went ‘down the drain’.

Simon Small, Equitable’s chief executive, has now devised a plan under which the company name will disappear after more than 250 years.

The business will be taken over by a new owner, Utmost Life & Pensions, formerly known as Reliance Life. It is part of an investment group that manages £33billion of funds for more than 240,000 customers.

A vote on the proposals was passed at an extraordinary meeting in November.

In return for the payouts, they must agree to give up guarantees. Their savings will be switched to ‘unit-linked’ plans which go up and down in line with the value of the investments.

Savers will be informed by letter of the exact new value of their policies by the end of January. The with-profit policies that detonated the problems at Equitable were supposed to smooth out the ups and downs of the stock market by adding guaranteed bonuses to savers’ nest eggs each year.

However, Equitable miscalculated and found itself unable to honour the promises it had made. It was forced to close its doors to new business in 2000 with a £1billion-plus black hole in its finances. 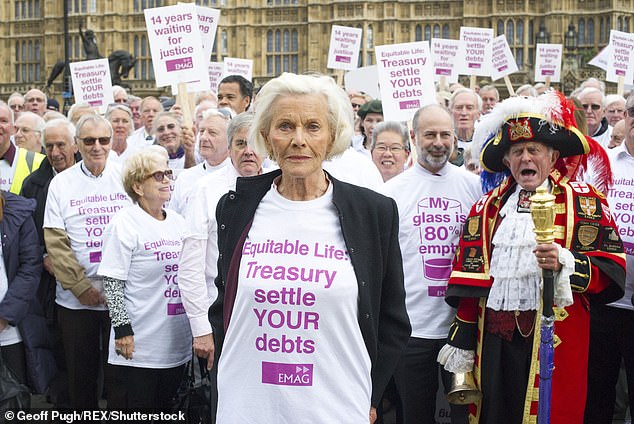 The one-off boost will give savers who have ‘with-profits’ plans an average extra payout of more than £9,000. Pictured: Honor Blackman with victims of the Equitable Life scandal demonstrating outside Parliament in 2014

The then Labour government refused to pay compensation to policyholders for many years, despite evidence that City regulators had failed to supervise the firm adequately.

A report from the Parliamentary Ombudsman in 2008, called ‘A Decade of Regulatory Failure’, set out the shortcomings in unsparing detail over around three thousand pages.

Under former chancellor George Osborne more than £1.5billion was paid out. But savers still suffered years of anxiety and many died before receiving a penny.

The January 1 payouts will finally draw under a line under the disaster.

Mr Small said: ‘There is a sense of quiet pride. Most of the staff were here when Equitable closed and so they are conscious that policyholders really suffered and went through a lot of anxiety.

‘This is a great outcome for policyholders.’

Washington lauds McCain as one of America's 'bravest...
I'm A Celebrity: Anne Hegerty flaunts jungle weight loss in first official shoot since leaving show
Experts lift the lid on the numbers of each sweet in Christmas tubs
ROBIN HARRIS: Puffed-up Tory popinjays put petty vendettas ahead of our national interest
A new dawn: The UK finally leaves the EU at 11pm TONIGHT
SARAH VINE: 10 ways to stay sane at home if you're stuck at home in coronavirus lockdown
Coronavirus UK: 92 care homes had outbreaks in past 24 hours
Firm using magic mushroom ingredient to treat clinical depression raises £64million from investors