A devastating ‘megafire’ tearing through the Blue Mountains has been filmed climbing up 200metre cliffs in the Grose Valley.

The clip, taken just before a southerly wind hit at 5pm on Saturday, creates the illusion of a ‘lava waterfall’ as vegetation on the cliff catches alight. 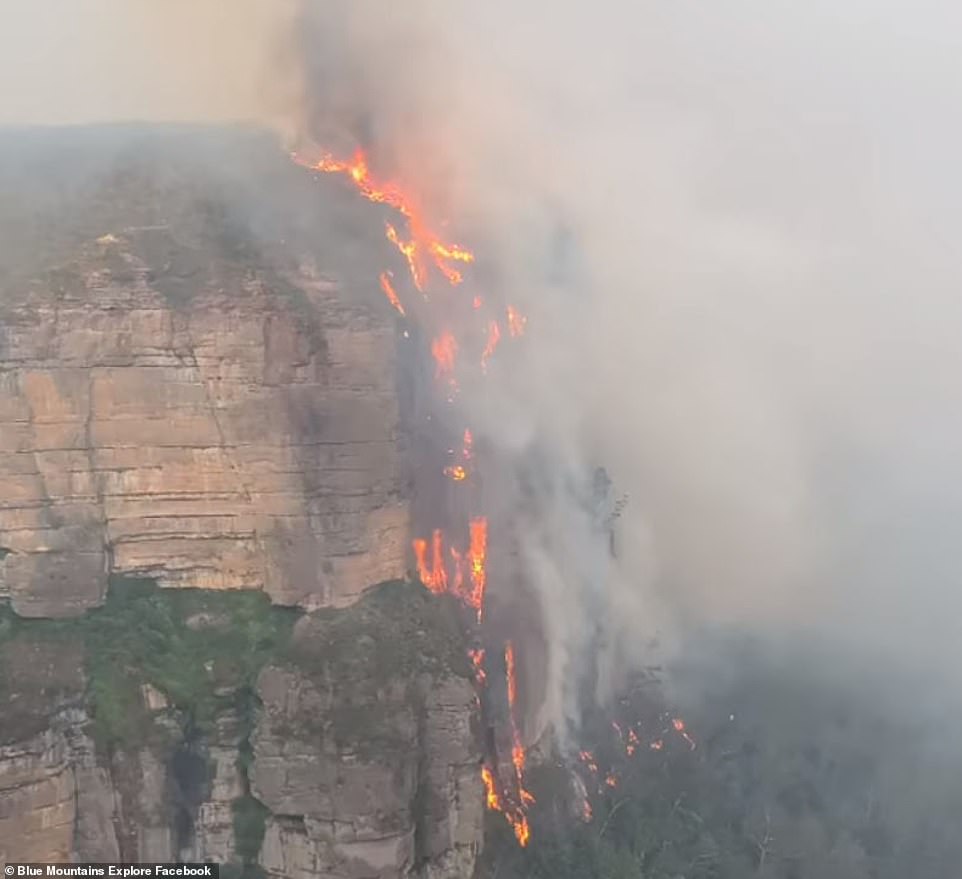 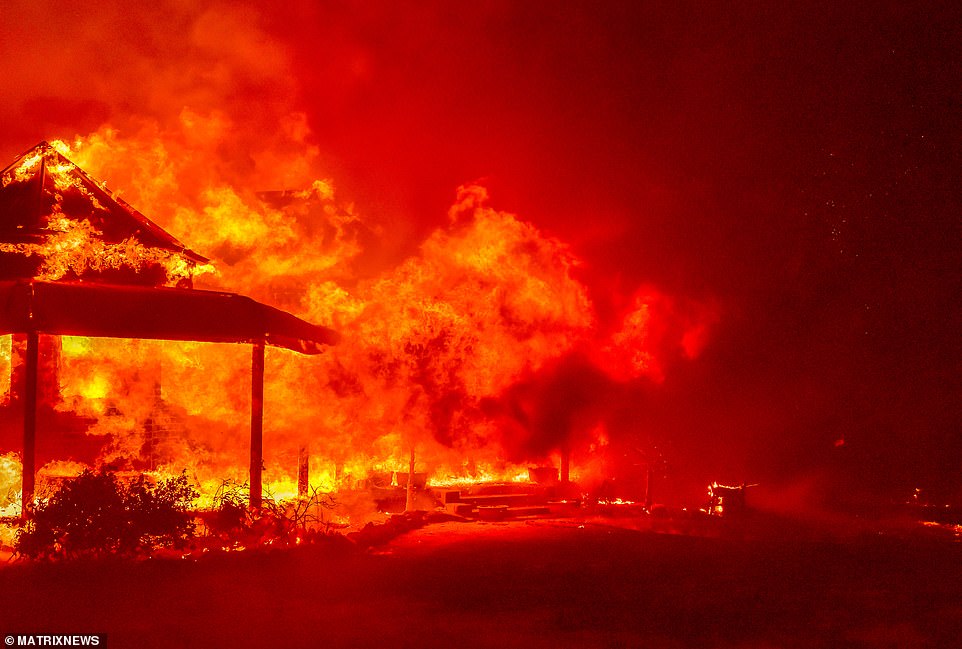 The 450,000-hectare Gospers Mountain ‘megafire’ (pictured), north of the Grose River fire, is thought to have destroyed at least 20 homes

The blaze is part of a 10,000 hectare fire burning out of control at the Grose River.

Mr Bryant told the valley had been totally destroyed by the blaze.

‘The Grose Valley has just been decimated, Hat Hill was evacuated at 3:00am this morning, and Kanimbla Valley is now burning on two sides,’ he said.

‘It’s not looking like it’s going to abate…We’re just hoping the bush can regenerate, and businesses can recover.’

Mr Bryant said he saw ‘desperation, fear and anxiety’ on people’s faces in his community.

‘We’re used to sirens going off, but when it’s on your doorstep and it’s been going on for weeks you get tired. The mountains are like a ghost town at the moment.’

The dramatic footage shocked hundreds of people on social media.

‘Have you ever seen anything like this? This is horrific,’ one wrote.  ‘It’s like a waterfall of fire,’ another added. 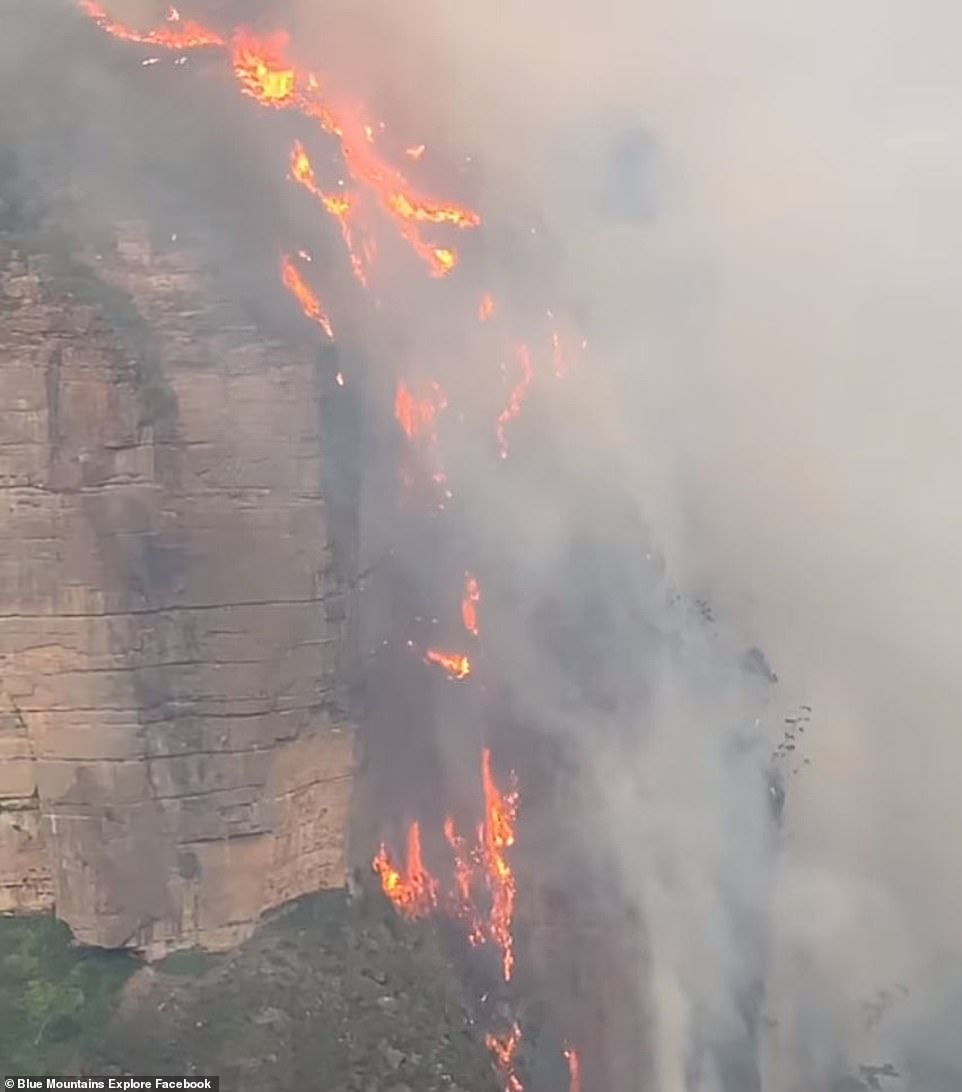 Blackheath local Kobe Byrant, 24, filmed the ‘lava waterfall’ at the Blue Mountains. He said the fires had turned his community into a ‘ghost town’ 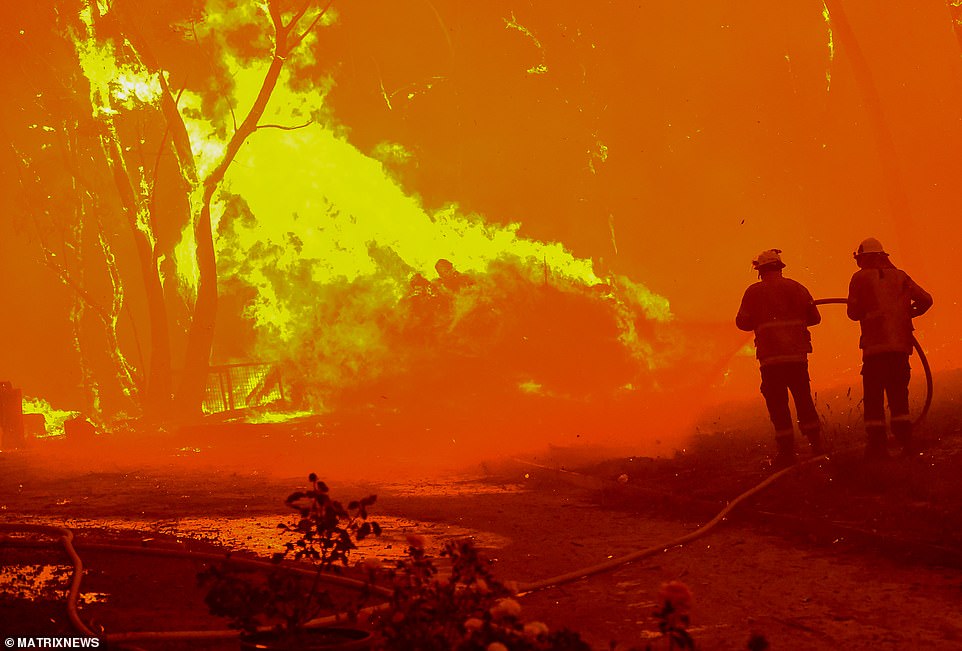 Intense weather conditions propelled a mega-blaze covering 460,000 hectares from Gospers Mountain through to the Blue Mountains on Saturday night.

The blaze is thought to have destroyed at least 20 homes and is still listed at emergency level.

RFS Commissioner Shane Fitzsimmons said much of the fire ground, including Bilpin, still needed to be on high alert into Sunday as a southerly change blew through the region north-west of Sydney.

‘Temperatures will drop but the humidity will rise. The vegetation, the landscape is so dry we are still seeing pretty significant fire behaviour and that is going to continue,’ he said.

In a stark warning that the crisis could last months, he added: ‘We will not get on top of these fires until we get some decent rain’.

With forecasts predicting close to a week of cooler conditions across NSW, Mr Fitzsimmons said his crews would do their best to get on top of the fires before tougher conditions return later in the week or next weekend.

‘Our big focus is on trying to consolidate and establish containment lines across as many fire grounds as we can. We have significant fire spread south of the Bells Line of Road and through the valley system such as the Grose Valley in the Blue Mountains,’ Mr Fitzsimmons told reporters.

‘So we will be looking at what are the options, what are the fall-back lines and at what point do we start implementing very significant strategies to secure protection for an impending threat to the Blue Mountains, particularly the communities along the Great Western Highway.’ 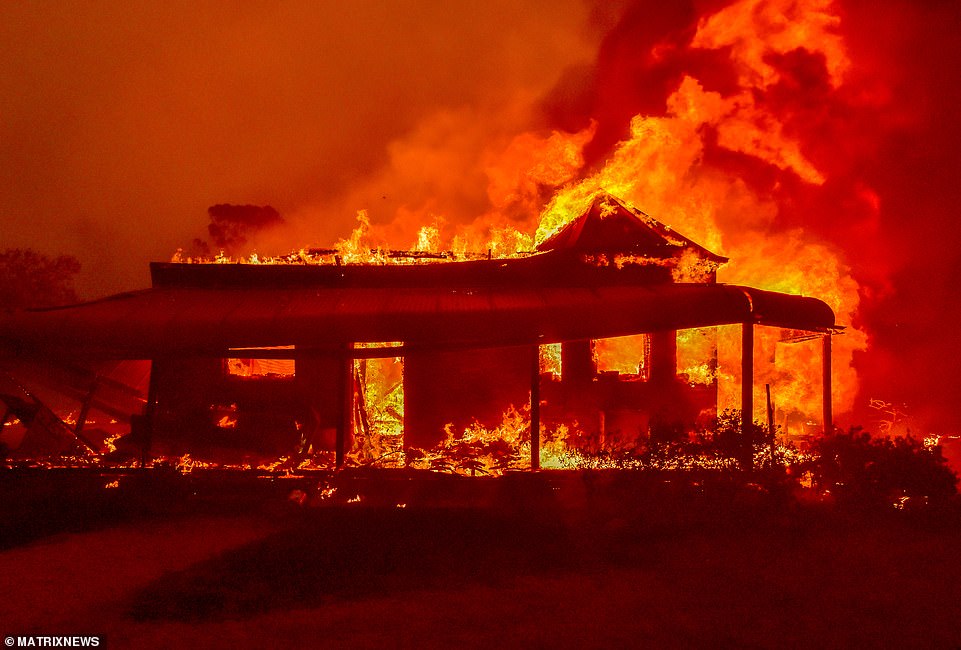 More than 20 homes are feared lost in the Blue Mountains after the blaze tore through on Saturday night, fuelled by intense weather conditions. Pictured: Tutti Fruitti Fruit Shop 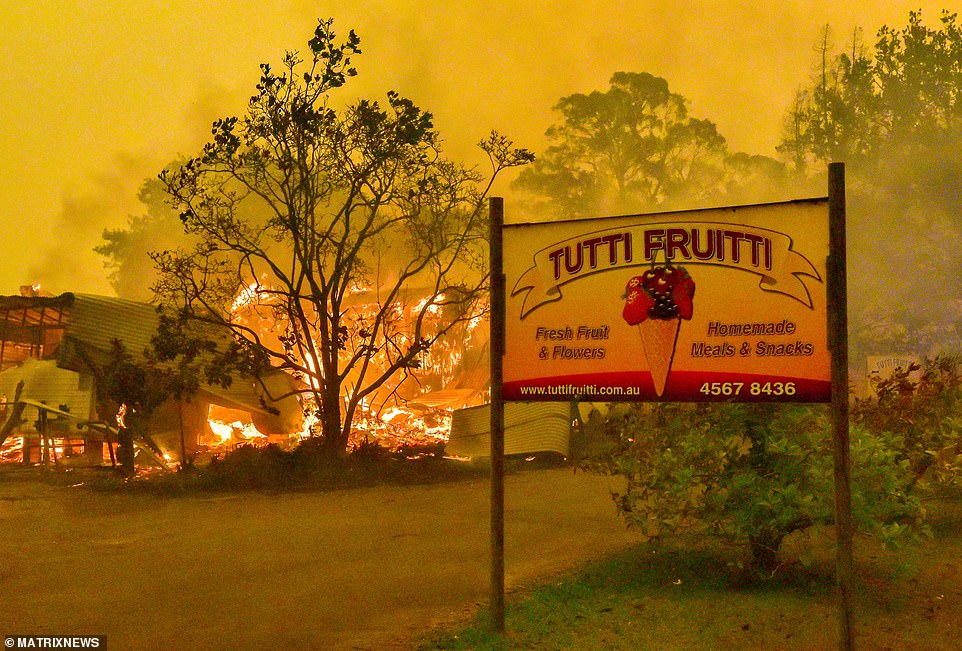 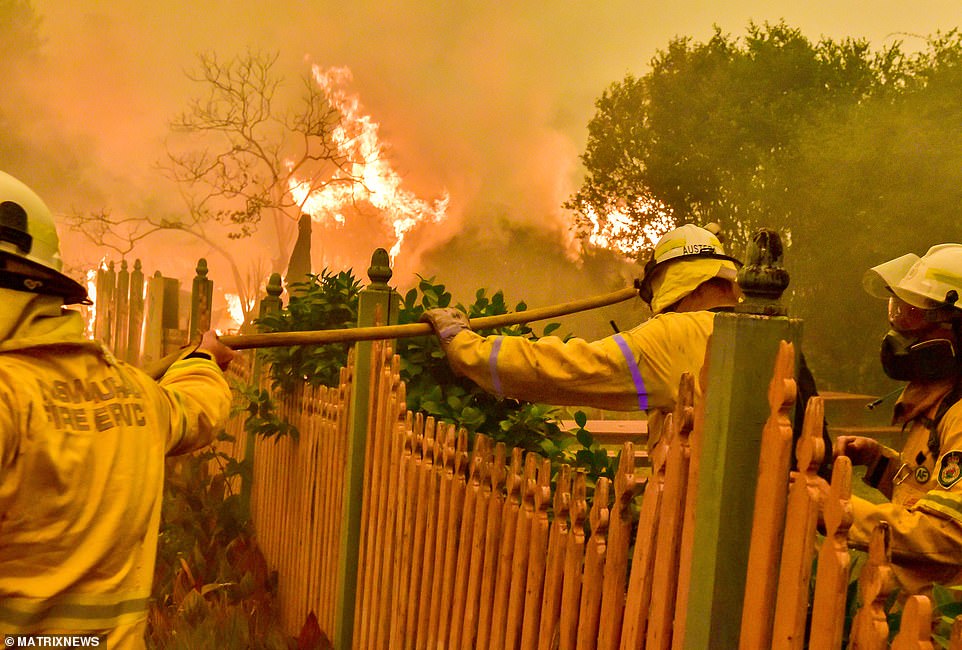 NSW Ambulance chief executive Dominic Morgan said a number of firefighters suffered heat exhaustion on Saturday while battling the 112 fires, which were having a ‘big impact’ on demand for emergency services.

As conditions worsened, Prime Minister Scott Morrison covertly arrived in back Sydney after holidaying in Hawaii with his family.

The Australian public largely criticised the PM for quietly leaving the country during the worst bushfires the country has seen.

During a press conference at the NSW Rural Fire Service headquarters in Sydney on Sunday, Mr Morrison said he made the decision to leave based on fatherly instinct and believed he’d left Australia in capable hands during his week-long absence.

‘I get it that people would have been upset to know that I was holidaying with my family while their families were under great stress,’ he said.

He then addressed critics who demanded he take climate change more seriously.

The prime minister said he’d always acknowledged the connection between climate change and bushfires but there were also ‘many other issues’ at play, including drought, fuel-load management, lightning strikes and arson.

‘There is no argument … about the links between broader issues of global climate change and weather events around the world.

‘But I’m sure people equally would acknowledge that the direct connection to any single fire event – it’s not a credible suggestion to make that link.’ 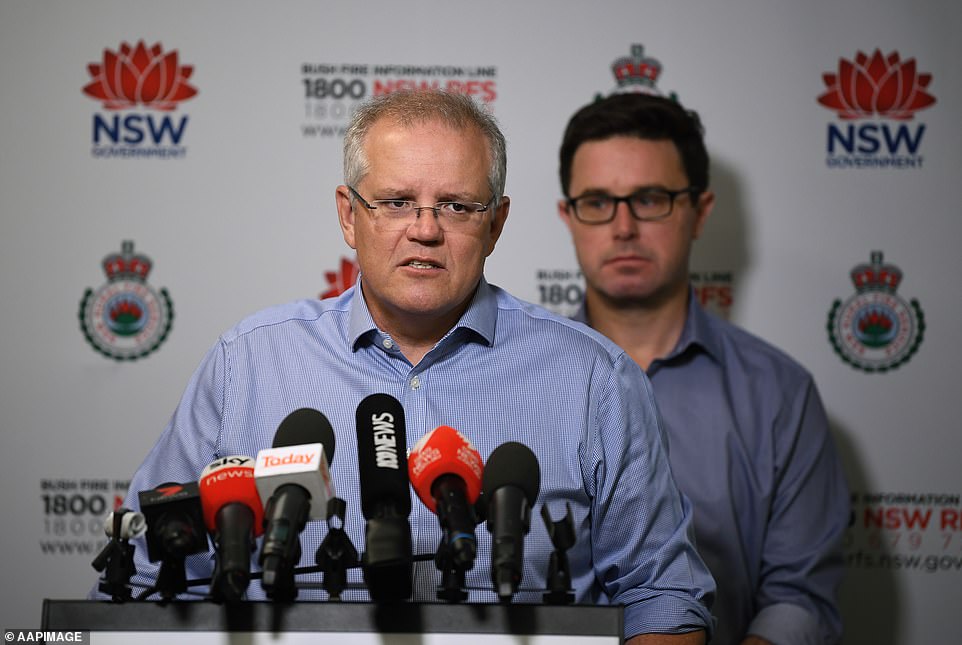 Two total fire bans are in place on Sunday in the Northern Slopes and North Western regions, under ‘very high’ fire danger.

‘Our big focus is on trying to consolidate and establish containment lines across as many fire grounds as we can. Mr Fitzsimmons told reporters.

‘We have significant fire spread south of the Bells Line of Road and through the valley system such as the Grose Valley in the Blue Mountains.’

Meanwhile, at least 54 people were injured on Saturday at the Cudlee Creek fire in South Australia, 23 of those including firefighters and two police officers.

Two people were found dead and hundreds of homes are on the brink of destruction.

One resident died in the Adelaide Hills as a fire ripped through the area, and another in a car crash in Lameroo.

At least 23 firefighters have been taken to hospital with injuries after battling more than 100 fires across South Australia, some just 40 minutes from the centre of Adelaide.

As of Saturday 15 houses were destroyed, along with 28 other buildings and 16 cars.

Richard Marx re-lists mega-mansion at $9 million... slashing the original asking price by HALF
8 things you can do in an hour that will protect your home from predicted rising costs
No, Granny won’t ruin your little darlings with one sherbet dip too many says SARAH VINE
Trump honors economist who advised him on lowering taxes
Woman caught in a lion's enclosure at Bronx zoo posts crazed rap video
EU gears up for 'flextension' to January 31
Lib Dem and SNP plot to offer Boris Johnson an EARLY election on December 9 is branded a 'stunt'
Head teacher and secretary jailed for defrauding school of £500k