Flooding blocked roads and railways, while part of a historic promenade collapsed.

The heavens opened across southern England and Wales on Wednesday afternoon, and half a month’s rain fell between then and yesterday morning. 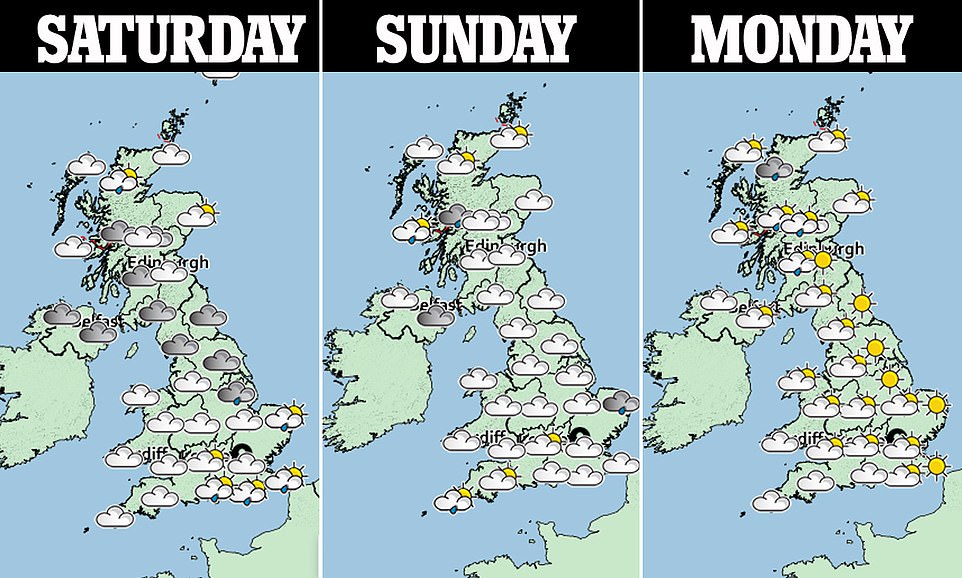 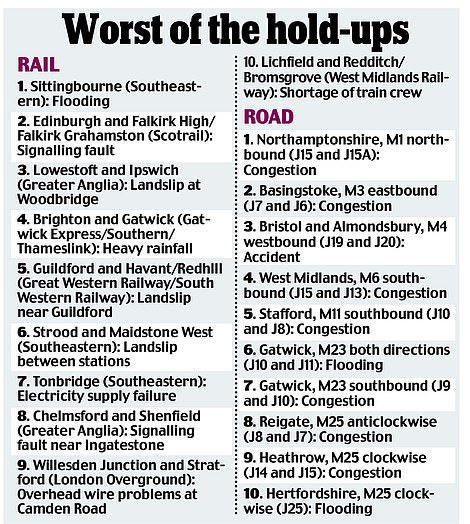 Some 57 flood warnings, where a flood is expected, were issued yesterday across central and southern England. And 195 flood alerts – where one is possible – were issued in the region.

But there was some festive cheer from forecasters – the weather is due to turn more settled next week and Christmas Day is set to be largely dry with sunny spells.

Yesterday’s rain caused a section of the promenade in Southsea, Hampshire, to collapse. The stretch had already been identified by the council as ‘dangerous’ and repairs will now take place.

The M23 was shut yesterday in both directions because of flooding near Crawley, West Sussex.

The River Rother, meanwhile, burst its banks in another part of the county, blocking roads. 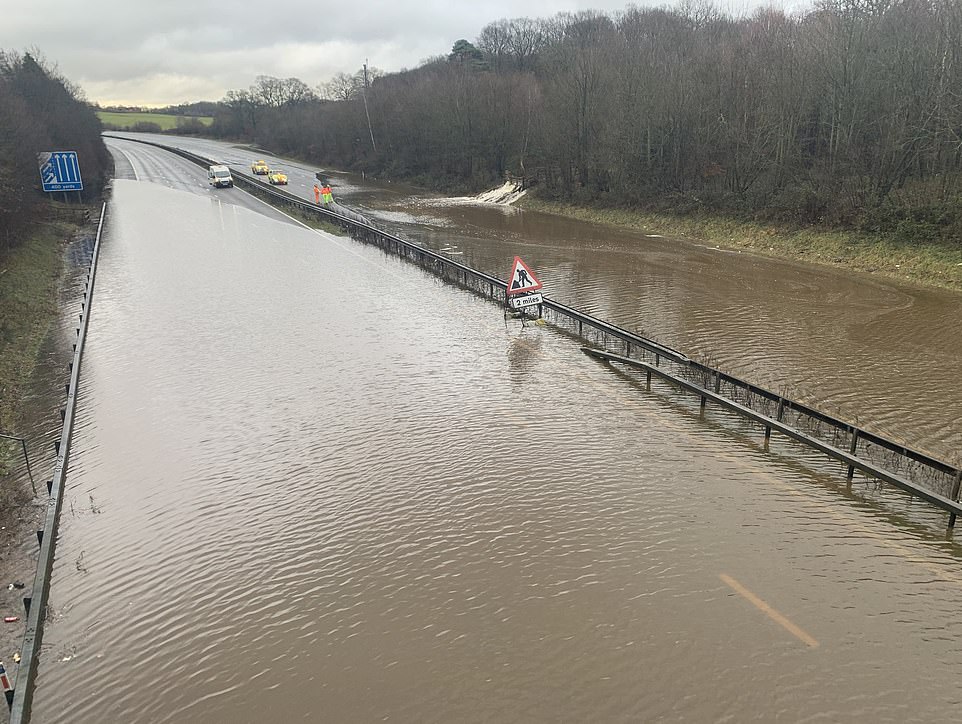 The M23 was shut yesterday in both directions because of flooding near Crawley, West Sussex, as workers battled to stem the tide

In Sussex the River Rother overflows. Some 57 flood warnings, where a flood is expected, were issued yesterday across central and southern England 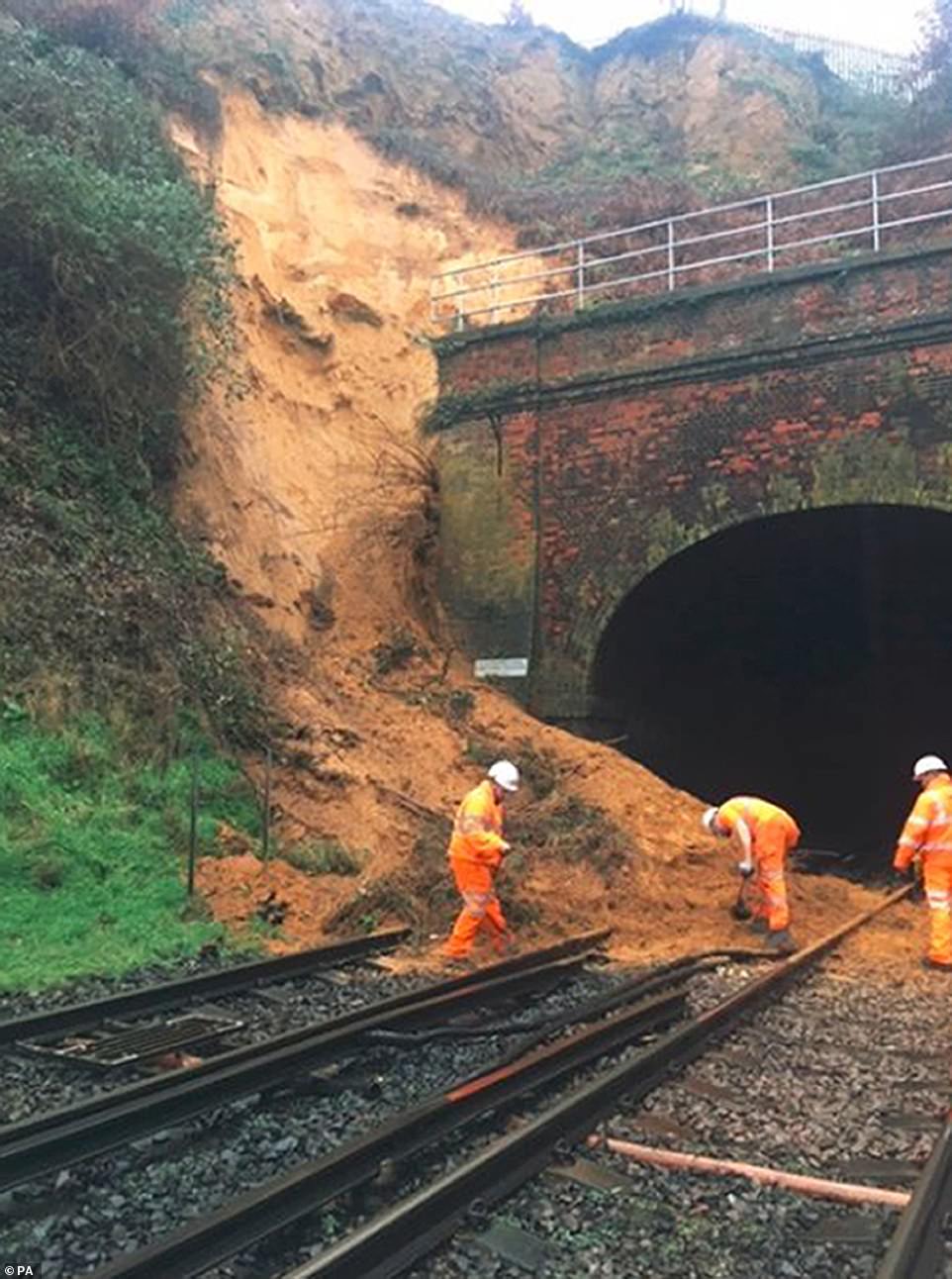 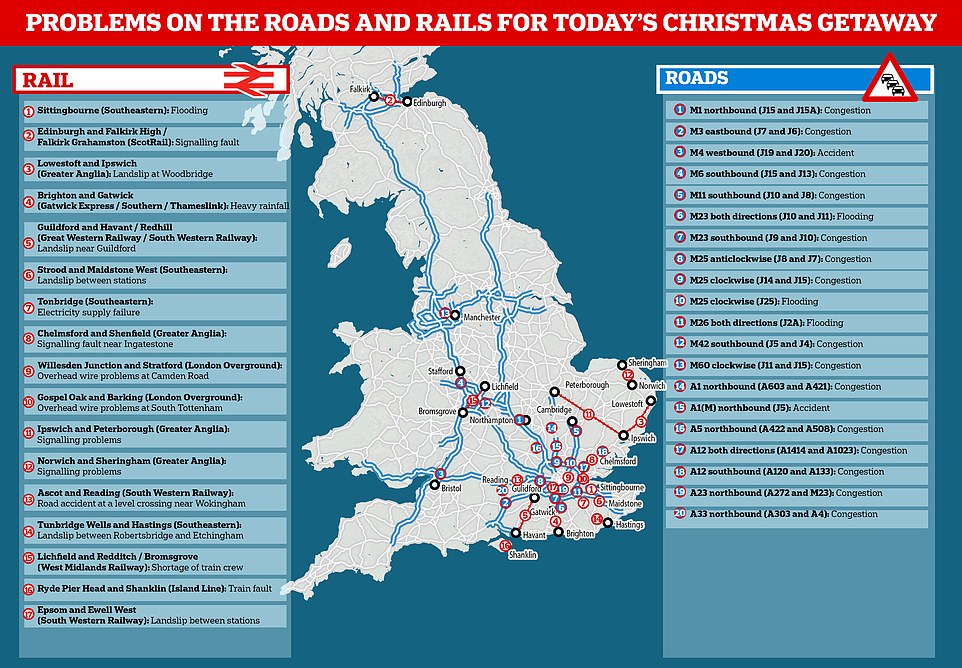 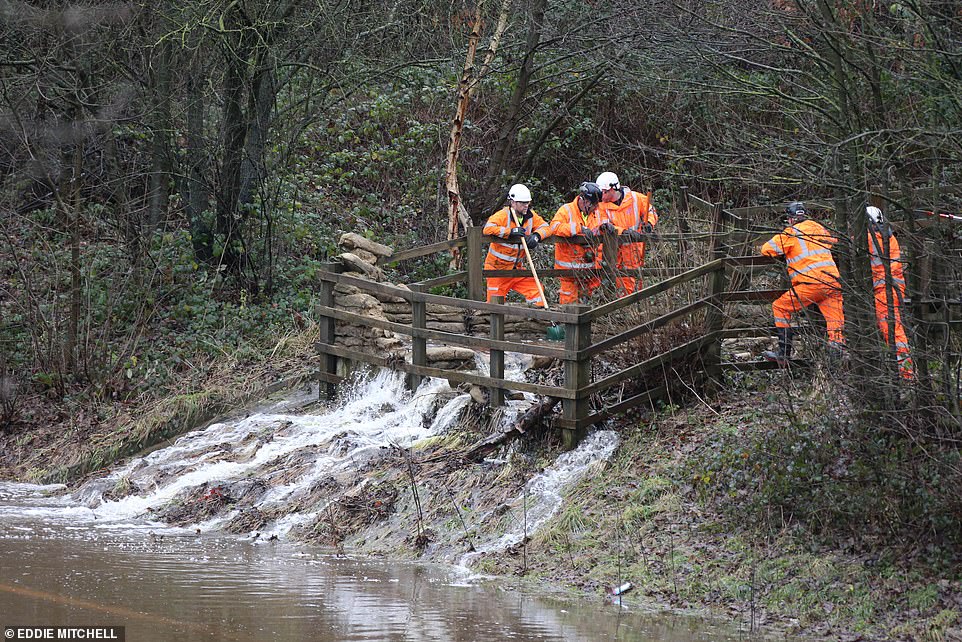 Road to ruin: Workers battle to stem the tide as the motorway is blocked in both directions after a river burst its bank near Crawley yesterday 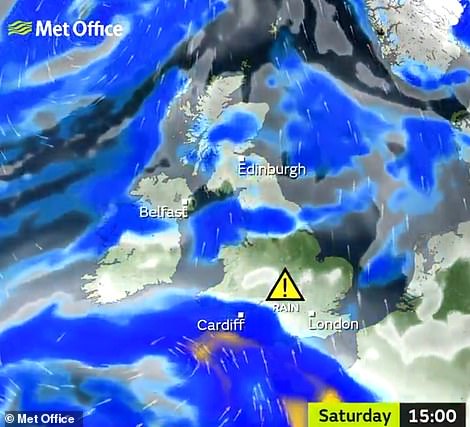 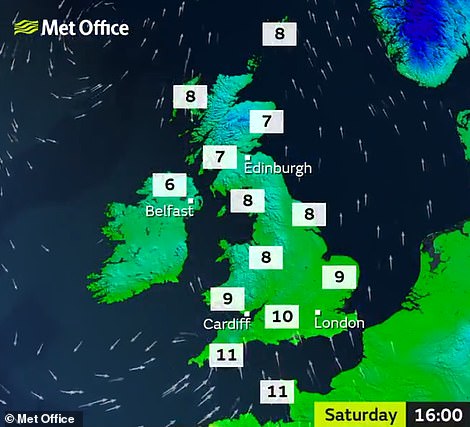 Further rain is expected today with southern England expected to be hit again, while temperatures will top 11C (52F) 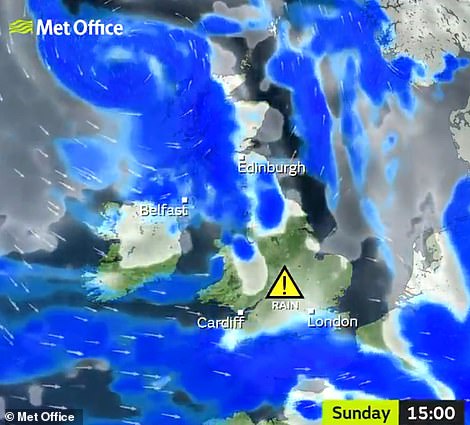 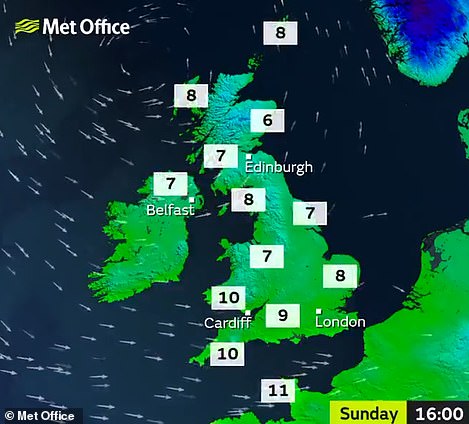 Tomorrow will also see rain fall in the South and many parts of the North and Scotland, with similar temperatures expected

There were also delays due to flooding on the A12 in Essex and the A20 in West Kingsdown, Kent.

Motorists had to be rescued from their cars by firemen after becoming marooned at Leigh, near Tonbridge, and Maidstone, both in Kent. Cars were also seen submerged near Billericay, Essex.

A landslip between Guildford and Godalming caused problems on services into Waterloo.

The wettest place between 3pm on Wednesday and 7am yesterday was Libanus, Powys, where 2.5in of rain fell. Bodmin, Cornwall, had 2in over the same period. The average monthly rainfall for the whole of December is 3.4in. Up to 2in of rain fell widely across the South.

A weather warning has been issued for the whole of today until noon tomorrow, covering southern England from Cornwall to Kent. Up to an inch more rain could fall, risking further flooding. Bonnie Diamond, of the Met Office, said that away from the South, the rest of England and Wales was set to experience a mixture of sunshine and showers.

She added: ‘During Sunday, a ridge of high pressure is due to build, meaning more settled conditions, although it could turn colder by day, with the possibility of frosts at night.’

The RAC has warned motorists to expect ‘bumper-to-bumper’ traffic over the next few days, with 31.2 million journeys set to be taken in the week before Christmas.

Yesterday was set to be one of the busiest days of the festive season for traffic, with 4.7 million trips planned.

Data from transport specialists INRIX shows the M1 in Bedfordshire and Northamptonshire, the northern and western sections of the clockwise M25, and M6 in the West Midlands are expected to see the worst delays over the next week.

Ben Aldous, of the RAC, said ‘bumper-to-bumper traffic on some motorways and major A-roads’ was ‘near-guaranteed’.

He said: ‘It looks as though millions of drivers are planning to complete their Christmas getaway trips this week.

‘Unfortunately, when you add in the prospect of unsettled weather, with heavy rain and strong winds in some parts, these are likely to be pretty unpleasant drives.’

Drivers with the AA who break down in unknown locations will now be able to find out where they are within a 3m x 3m (10ft x 10ft) square.

A company called what3words has divided the world into 3m x 3m squares, and assigned each one a three word identifier.

This means that AA customers can now provide the call operator with their exact what3words address during a breakdown to help find them faster.

The AA estimates there could be up to 143 million car journeys over this Christmas period, with around 10,000 breakdowns per day.

what3words does not require an internet connection, so even if a customer breaks down in a very rural location with no visible landmarks, they will be able to find and describe the exact position of their stranded vehicle. 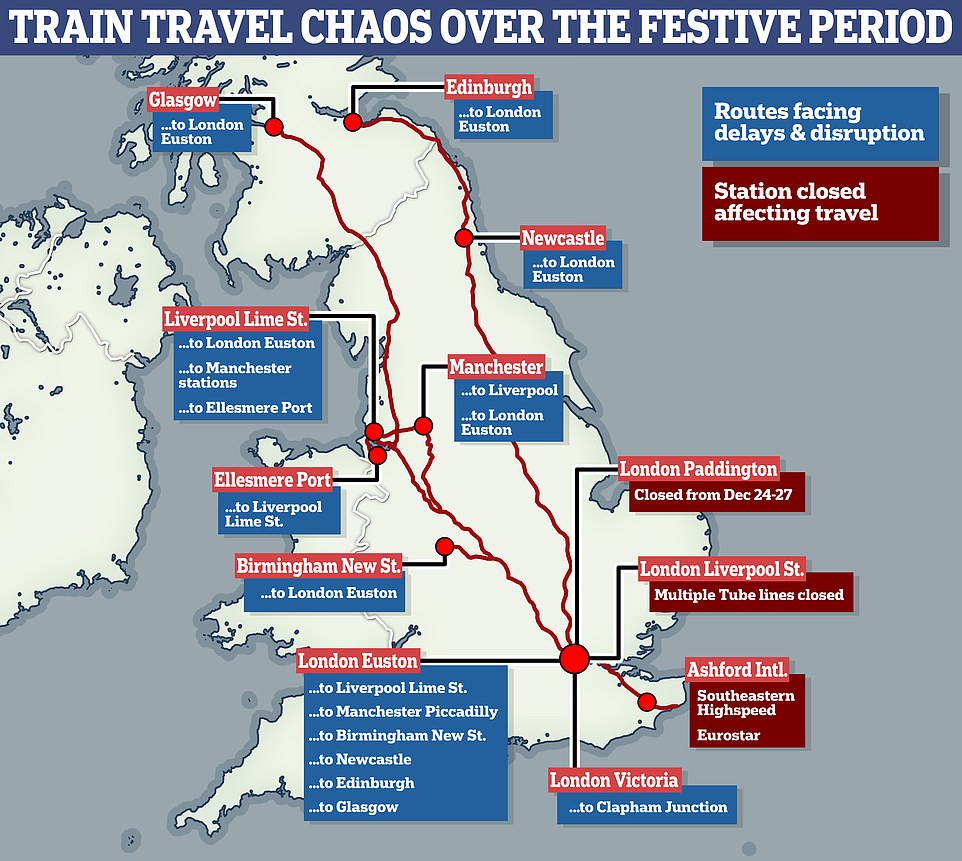 A couple who faced losing their home after it was damaged by flooding are in fear no more after putting it on stilts.

Dawn and Sam Ray have lived close to the banks of the River Severn for nearly 50 years, and they took occasional flooding for granted until the house was flooded by 4ft 6in of water in 2007.

Determined not to be beaten, the pair spent more than £100,000 having builders lift part of the house onto 12ft-high stilts – meaning they are high and dry in all weathers. 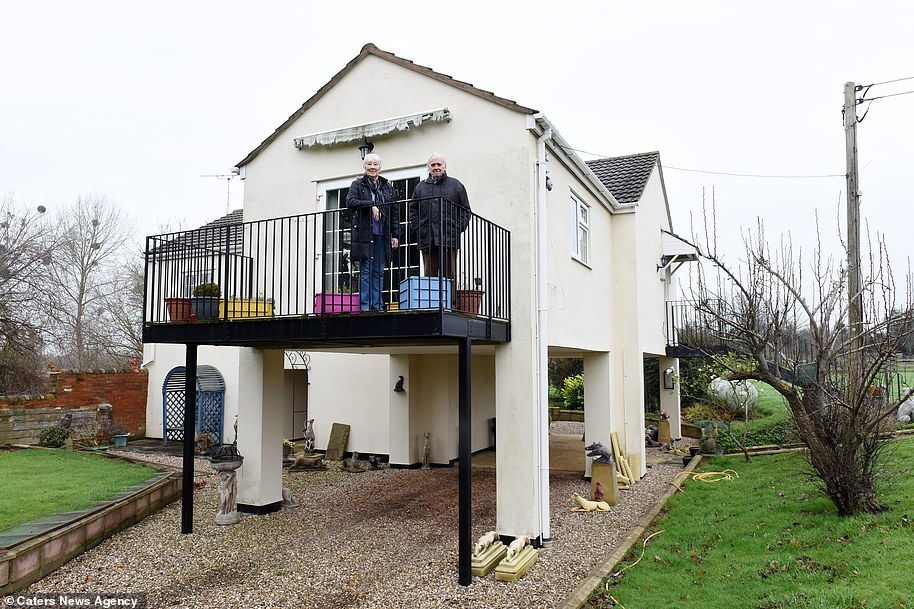 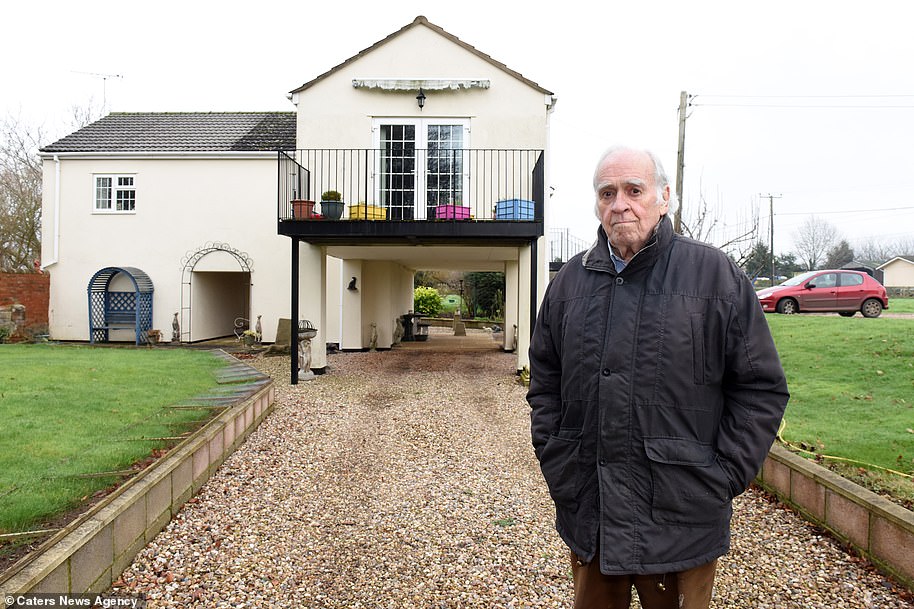 The pair spent more than £100,000 having builders lift part of the house onto stilts – meaning they are high and dry in all weathers

‘We could have had it put right by insurance but it would have happened again two or three times since so we decided to go down this route. We definitely made the right decision. We’ve got no worries at all and it’s an excellent place to live.’

Mr Ray said: ‘We lived in the shed for six months while the house was being built. The house is basically a bungalow on stilts.’ 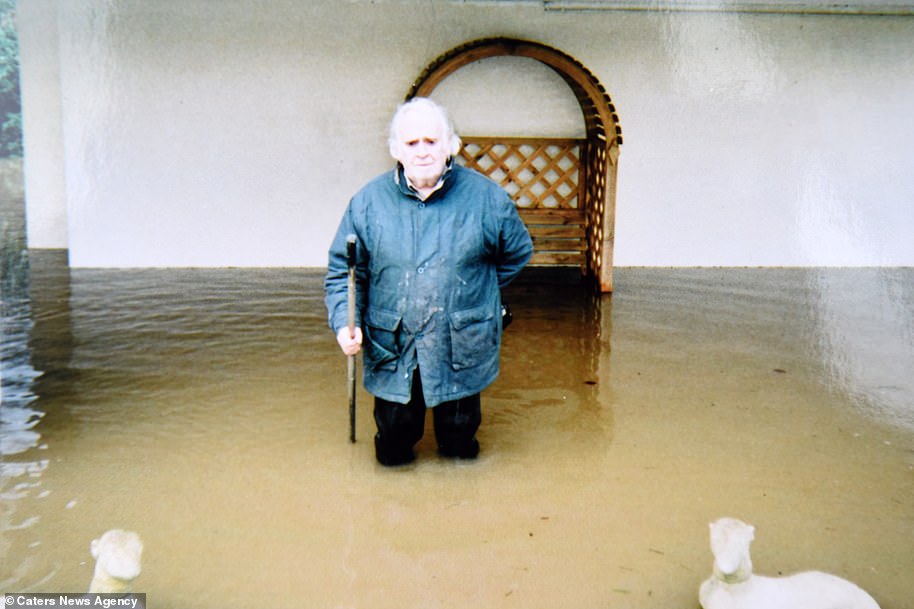 Mr Ray is pictured in floodwater. The couple took occasional flooding for granted until the house was flooded by 4ft 6in of water in 2007 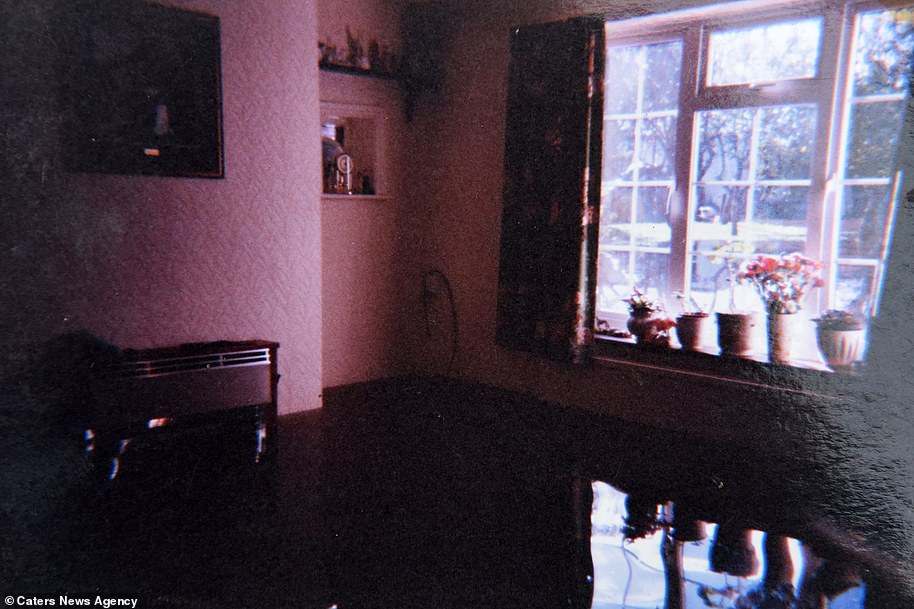 During the recent flooding in Gloucestershire and Worcestershire, Mr Ray said the house has been unscathed. The couple have even been marooned at the house for up to a week.

Mr Ray, 82, said: ‘We’ve had a bit of seepage underneath but we would have had a foot in the old house. Now we can just sit and watch the water appear.

‘We do get marooned but the way we look at it is that if we can’t get out than no one else can get in. We stock up with supplies. The longest we’ve been marooned is a week.

‘When we were younger we just used to wade through the water to where the car was uphill. It was an adventure, now we just take it in our stride. Sometime’s it’a bit like living in a castle.’

Mr and Mrs Ray finally moved into their new home early in 2009 – and have been dry ever since.

Mr Ray said: ‘It wasn’t sellable and we like living here. The water can’t reach us now. A lot of people say we’ve done the right thing. As we get older we intend to stay at the house. There’s just the one flight of steps so it’s quite easy.’

What is the forecast for Christmas Day?

Britain is facing a Christmas Day freeze as mild and stormy conditions give way to Arctic temperatures and possible snow.

A cold northerly blast will roar in during the middle of next week with frost and foggy conditions expected on the big day.

It will follow an unsettled weekend with bouts of strong winds and torrential forecast through until Christmas Eve.

Thermometers will plunge overnight into Christmas morning putting some northern parts of the country in the running for a festive flurry.