She was known as Sporty Spice during the height of her girl band’s fame.

And Spice Girl Mel C, real name Melanie Chisholm, payed tribute to her roots on Saturday as she stepped out in a funky hoodie adorned with the words ‘Team Sporty’ after performing her solo single High Heels for Dermot O’Leary.

The Spice Girls star, 45, was in high spirits as she left Wogan House in while sporting the cosy ensemble with maximum glam in her hair and make-up. 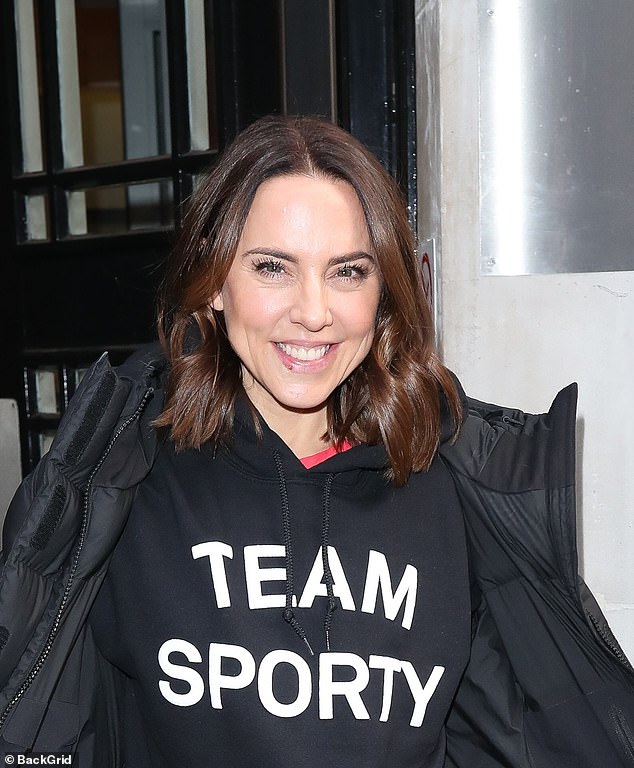 Mel cut a casual figure in a padded black coat and faded jeans with a sensible pair of black trainers for optimum comfort on the day out.

Her brunette tresses were left down to frame her pretty features and she added a slick of natural makeup to enhance her features.

The star laughed and smiled as she headed out of the building’s front door.

The performance comes after Mel C revealed the Spice Girls rejected an opportunity to sing with Adele while she was at the last show of their reunion tour at Wembley Stadium in June. 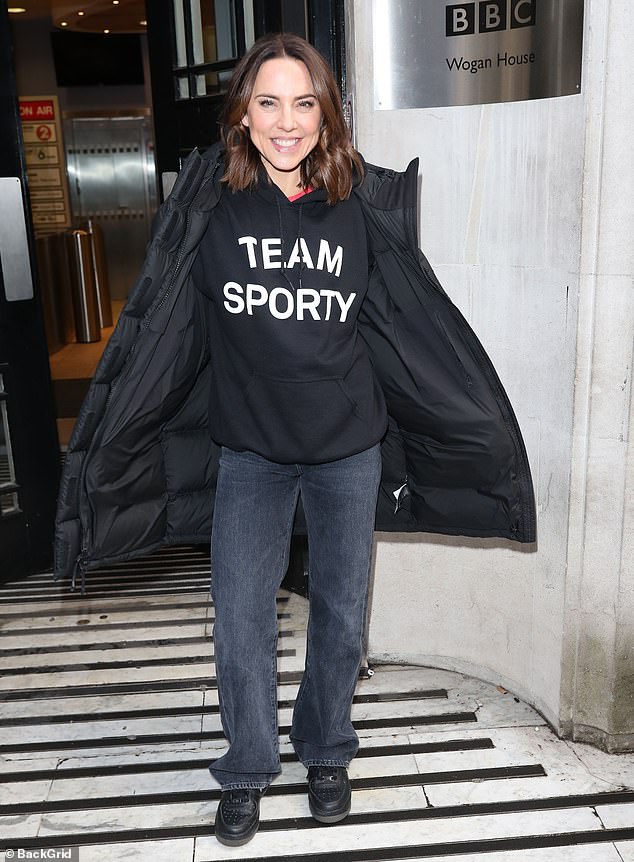 Chirpy: The Spice Girls star, 45, was in high spirits as she left the BBC Wogan House in London on Friday 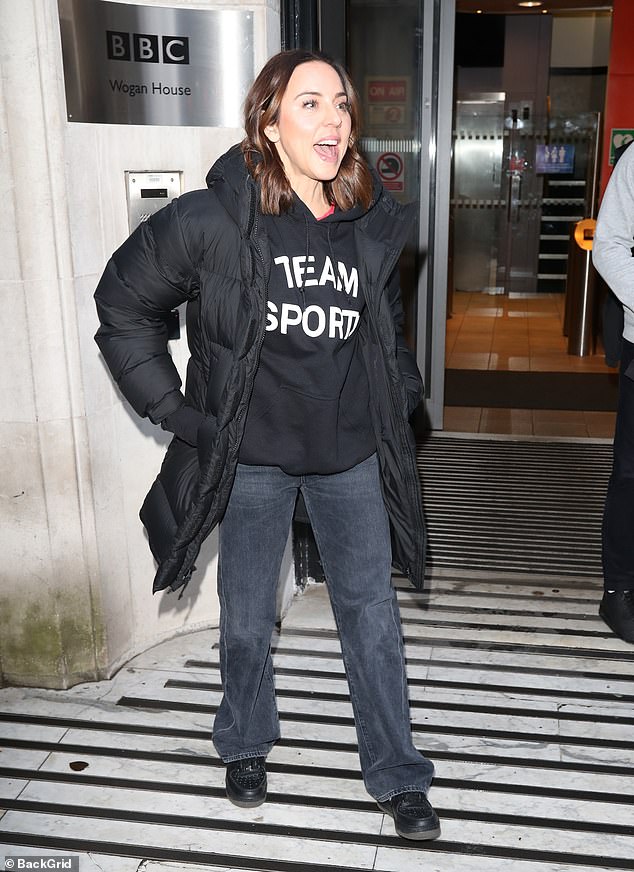 Casual: She cut a casual figure in a padded black coat and A-line faded jeans with a sensible pair of black trainers

She admitted the girl band opted against sharing the stage with the award-winning musician, 31, because they were worried she would upstage their vocals.

She said: ‘I heard a rumour that she did want to come up and do 2 Become 1. But we said no because, who wants to sing with Adele?’

The Spice Girls went out in a blaze of glory for their final reunion show at the famous London venue, marking Mel, Emma Bunton, Mel B and Geri Horner’s first performance together since 2012 Summer Olympics closing ceremony.

Sporty: Mel C has previously credited her incredible, athletic figure to competing in triathlons (pictured left at the 2019 reunion tour and right in 1996)

Songstress Mel told she’d like to perform with her bandmembers for another tour in the future as they want to reach individuals from ‘all over the world’.

Fans were left disappointed as Posh Spice Victoria Beckham decided to sit out of the reunion tour due to work commitments.

Insisting she understands why her close pal didn’t take part in the iconic tour, she shared: ‘Victoria s**t herself when we did it, not literally, but she was very nervous and petrified when we were at the Olympic Stadium…

‘It’s completely understandable. Her life has changed so much and she has worked so hard.’ 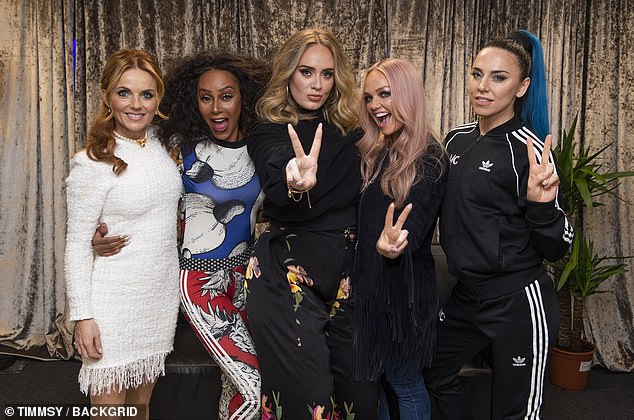 ‘Who wants to sing with her?’ It comes after Mel C revealed the Spice Girls rejected an opportunity to sing with Adele during the final show of their reunion tour back in June (pictured L-R Geri Horner, Mel B, Adele, Emma Bunton and Mel C)

Claiming the fashion designer, 45, would be on board to reunite in Glastonbury, Mel added: ‘She f***ing would. She would. She’d love to do Glastonbury. The truth behind the rumour is we’ve never even been approached.’

During their last performance, superfan Adele danced her heart out to Spice Up Your Life with friends in a VIP area, and revealed she ‘got drunk’ with the group after the show.

The Someone Like You belter has long spoken of her love of the Spice Girls and uploaded an Instagram post following the show where she paid tribute to them as ‘British legends’ after sharing a video of herself dancing around to one of their smash hit songs.

Reunited: Fans were left disappointed as Posh Spice Victoria Beckham decided to sit out of the reunion tour due to work commitments (pictured during 2012 Olympics closing ceremony)

She wrote at the time: ‘Oiii last time I saw the Spice Girls at Wembley was 21 years ago! Tonight with my nearest and dearest I cried, laughed, screamed, danced, reminisced and fell back in love with my 10 year old self.

‘It’s no secret how much I love them, how much they inspired me to run for my life and never look back.

‘I finally got to meet Ginger, I got drunk with the girls and quite frankly I can’t believe how far I’ve come.

‘Thank you for the madness I get to live, I couldn’t have got here without you 5 BRITISH legends! I love you!’ 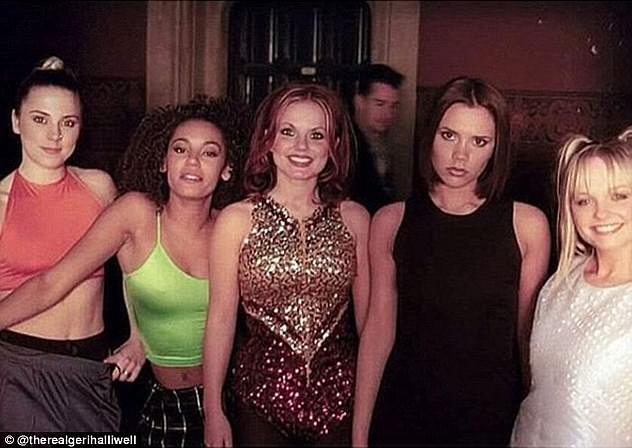 Back in the day: (L-R)Mel C, Mel B, Geri and Emma took to the stage for the first stop on their 13-show reunion tour, debuting as a foursome for the first time (above with Victoria Beckham in 1997)