An ancient crocodile species that weighed up to three tonnes and was as long as a bus had an extra hip bone and upright shoulders, say researchers.

The differences in its body compared to modern crocodylians allowed it to move its ‘vast bulk’ in river and swamp habitats as well as across land, experts fond.

An international team, led by palaeontologists in Zurich, have been examining the fossil records of early giant crocodylian species to discover how they moved.

Purussaurus mirandai was a match for the Asian elephant on the scales, and came in at 26ft long, according to John Hutchinson from the Royal Veterinary College.

An ancient crocodile species that weighed up to three tonnes had an extra hip bone and more upright shoulders than their modern cousins, say researchers. This graphic drawing shows the species in comparison to an adult human 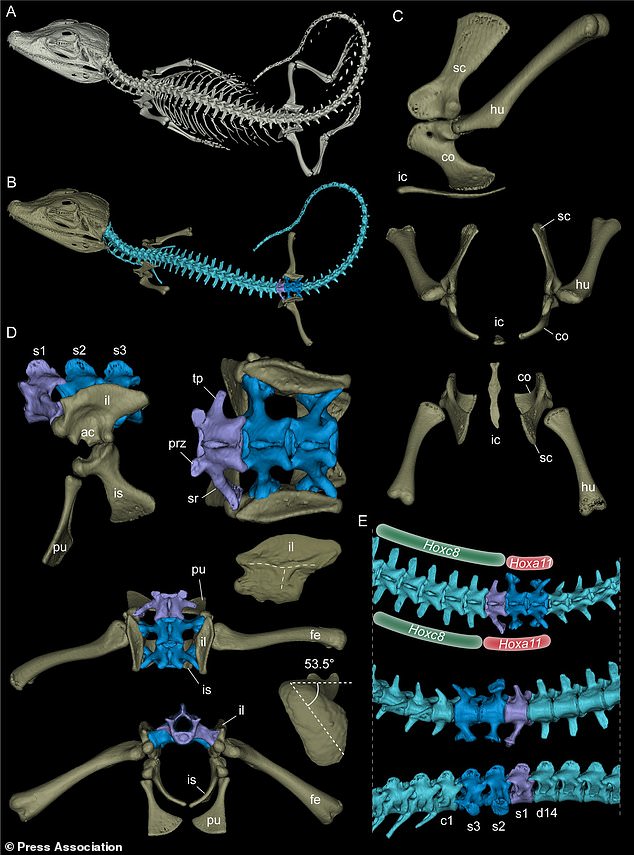 The species being studied lived six million years ago in what is now Venezuela, and was one of the largest members of the crocodylian group.

The team, led by Torsten Scheyer of the Palaeontological Institute of Zurich found that it had an extra vertebra in its sacrum, a bone at the base of the spine.

They also found it had reoriented its shoulder to align it with the action of gravity.

The pre-historic caiman is the only crocodylian found to date that has an extra vertebra in its sacrum. 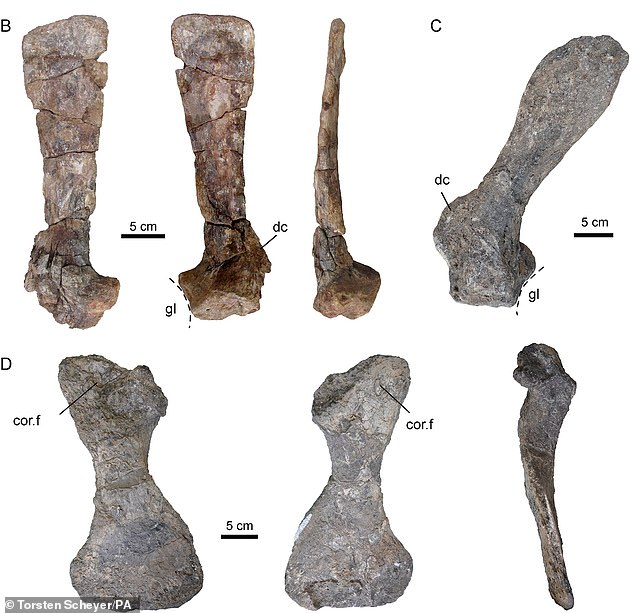 The species being studied lived six million years ago in what is now Venezuela, and was one of the largest members of the crocodylian group

The discovery of the extra vertebrae requires changes to the ‘Hox genes’ within the species that control where certain body parts are formed.

Scientists noticed that some living crocodylians suffer malformations that cause an extra vertebra – which they say suggests the gene is still there in modern crocodiles.

‘Our findings are important because they help show how development can be altered in order to enable biomechanical changes as animals evolve into larger body sizes’, said Professor Hutchinson.

The discovery of the extra vertebrae requires changes to the ‘Hox genes’ within the species that control where certain body parts are formed. This image shows researcher Torsten  Scheyer lying next to the laid out bones of Purussaurus mirandai

Dr Scheyer said they were lucky to find so many fossils in Venezuela as it shows the significant variations in evolution between ancient and modern species.

‘These old bones show us once again that the morphological variation seen in animals that are long extinct extends well beyond that of what is known in living animals, and thereby broadens our knowledge of what animals can do in evolution.’

The study is published in the online journal .

WHAT DO WE KNOW ABOUT THE EVOLUTION OF CROCODILES?

Of all the reptiles alive today, crocodiles may be the least changed from their prehistoric forebears of the late Cretaceous period, over 65 million years ago

However, the even earlier crocodiles of the Triassic and Jurassic periods sported some distinctly un-crocodile-like features, such as bipedal postures and vegetarian diets.

Along with pterosaurs – the family of flying reptiles – and their land-based relatives the dinosaurs, crocodiles were an offshoot of the archosaurs, the ‘ruling lizards’ of the early to middle Triassic period.

The earliest dinosaurs and the earliest crocodiles resembled one another a lot more than either resembled the first pterosaurs, which also evolved from archosaurs.

What distinguished the first crocodiles from the first dinosaurs was the shape and musculature of their jaws, which tended to be much more deadly, as well as their relatively splayed limbs—as opposed to the straight, “locked in” legs of theropod dinosaurs.

It was only well into the Mesozoic Era that crocodiles evolved the three main traits with which they’re associated today: stubby legs; sleek, armoured bodies, and marine lifestyles.