A bride’s reaction to her new husband dancing with his mother at their wedding has sparked a debate on whether her ‘ranting and raving’ response was justified.

The moment was shared by a US-based  user named , who said that, while the incident happened a year ago, he is still stunned by the bride’s reaction to the situation.

In the post the user explained how the bride specifically told her groom he was not allowed to have a mother-son dance because she was unable to have her own special moment with her father since he died, but the groom did anyway. 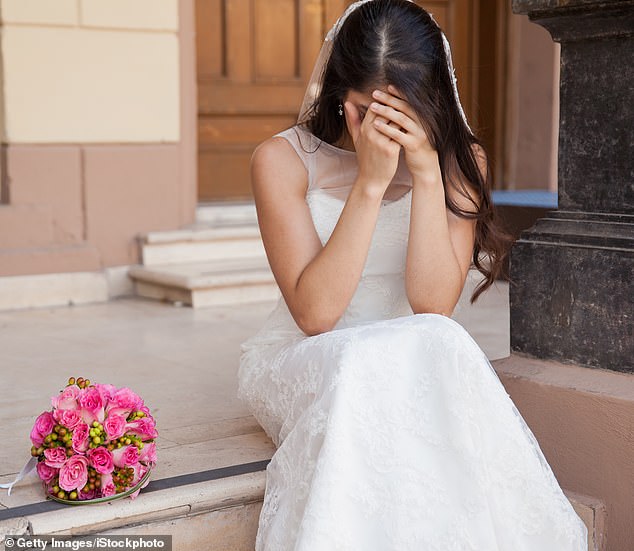 Controversial: A bride’s reaction to her new husband dancing with his mother at their wedding has sparked a debate on whether her ‘ranting and raving’ response was justified (stock image)

‘The bride, who is a friend of my girlfriend, lost her father in a car accident when she was very young. Her fiancé never had the opportunity to meet her father, and this had a huge impact on her when they were planning their wedding,’ the user wrote.

‘She didn’t want anyone else to walk her down the aisle and walked alone, which in my personal opinion, is understandable considering the circumstance, albeit unusual. However, there was a stipulation that her future mother-in-law and her fiancé were NOT ALLOWED, under ANY circumstances, to have the formal “mother-son dance” because she couldn’t have a “daddy-daughter dance”.’

The mother-in-law was upset by the request, but the bride refused to budge.

On the day of the wedding there was no formal moment for the groom and his mother to have a dance together. Then an opportunity presented itself.

‘The night had been going on for some time and eventually a slow dance rolled around. The MIL and son took that opportunity to dance together and share a moment,’ the Redditor wrote.

‘The family of the groom, totally unaware of the bride’s unofficial rule, begin cheering as they watched them dance together, people started taking pictures, a crowd formed.’

Supportive: Some commenters stood by the bride because they understood her grief over not being able to dance with her father

True: Another commenter pointed out it was unfair for the bride to forbid her husband to ever have a moment with his parents because she can’t

Difficult: Many people were in agreement it was a difficult situation between the couple

Seeing the groom and mother dancing together upset the woman, who ended up leaving the reception in tears.

‘She ran outside the banquet hall to the bathroom and had a huge hissy fit complete with mascara tears, swearing, ranting and raving,’ the wedding guest wrote.

The user was not big on the bride imposing a rule on the groom to not have a special dance with his mother, but he stated the couple was still together and expecting a child.

Other commenters remained divided, though, on the brides response to the situation.

‘Eh. I’m not seeing bridezilla,’ one commenter wrote. ‘Imagine feeling so entitled to a mother-son dance that you will force your new daughter in law to think about her grief and tragic loss while flaunting her loss, on what should have been one of the happiest days of her life.’

Another commenter pointed out it wasn’t fair of the bride to forbid her husband to have any moments with his parents just because she lost her father.

‘Imagine going through the remainder of your marriage being told “you cannot share special moments with your parents bc I can’t” yikes.’

‘That’s tough, losing a parent is hard,’ another Redditor wrote. ‘But I don’t agree with her actions. You want so bad for your parent to be there to dance I get it. To take it away from someone whose parents are there, just isn’t the right way to go about it. You don’t take something away because you don’t have it.’

Although the couple experienced a difficult moment during their reception, they still remain together.

School straps autistic boy, five, to chair as other children play freely
Tom Brady, 41, leads the Patriots against the Los Angeles Rams
Trump still facing 'a dozen' legal threats from federal and state prosecutors
Ex-Labour and Change UK MP Chuka Umunna joins the Liberal Democrats
British Museum Collecting Histories: Solomon Islands exhibition on how it acquires artefacts
The two nuclear workers killed in Russian explosion have vanished after being thrown into the sea
Students say goodbye to their family at Waterloo Station as they head back to school
Pope Francis doesn't believe in 'bodily resurrection of Christ'