The Jewish Democratic Council of America has denounced President Trump’s ‘vile and bigoted remarks’, calling him the ‘biggest threat to American Jews’ after he ‘used anti-Semitic stereotypes to characterize Jews as driven by money and insufficiently loyal to Israel’.

was the subject of a backlash after on Saturday he told the crowd at the American Council’s National Summit in that they would end up voting for him in the election because Democratic candidate would tax them more.

Trump went on to say: ‘Even if you don’t like me; some of you don’t. Some of you I don’t like at all, actually. And you’re going to be my biggest supporters because you’ll be out of business in about 15 minutes if they [Democrats] get [the presidency].’ 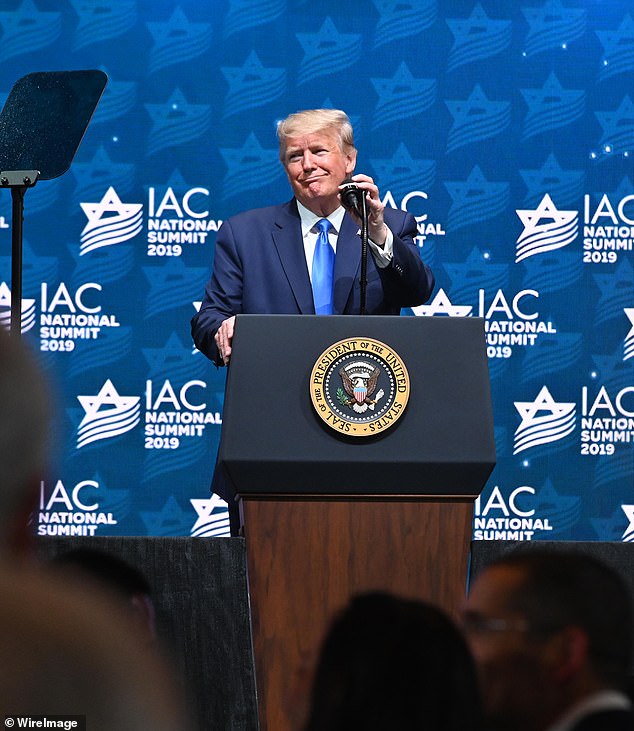 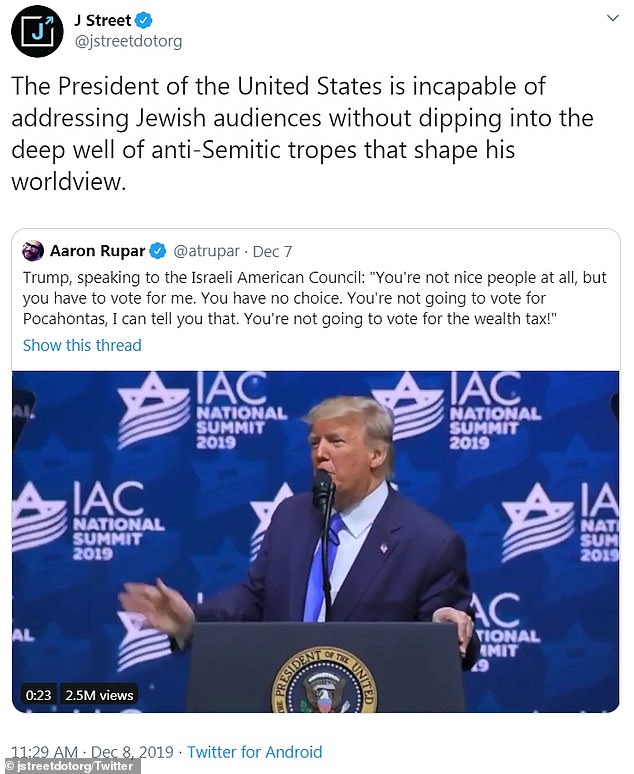 It prompted outraged tweets with some calling POTUS out as exercising ‘white supremacy’ and labeling him ‘anti-Semitic’.

Rabbi Danya Ruttenberg tweeted: ‘It’s not even coded antisemitism. It’s not a dog whistle. He’s saying this. Out loud. To a room full of Jews. (Who laugh, wtaf white supremacy is a hell of a drug).’

‘The President of the United States is incapable of addressing Jewish audiences without dipping into the deep well of anti-Semitic tropes that shape his worldview,’ J Street tweeted.

Jewish Democratic Council of America (JDCA) Executive Director Halie Soifer said in a statement: ‘The president’s deeply offensive remarks before the Israeli American Council, including his unconscionable repeating of negative stereotypes that have been used historically to target Jews, only reinforce our belief – and warning in our latest ad – that Donald Trump is the biggest threat to American Jews.

‘We strongly denounce these vile and bigoted remarks in which the president – once again – used anti-Semitic stereotypes to characterize Jews as driven by money and insufficiently loyal to Israel. He even had the audacity to suggest that Jews “have no choice” but to support him.’

Soifer said in the statement that support for the Republican Party had decreased among Jews since Trump entered the White House.

She claimed that his words had directly impacted hateful acts towards Jewish people.

‘American Jews do have a choice, and they’re not choosing President Trump or the Republican Party, which has been complicit in enacting his hateful agenda,’ Soifer continued. ‘In fact, Jewish support for the GOP has been halved since Trump has been in office, from 33 percent in 2014 to 17 percent in 2018, because Trump’s policies and rhetoric are completely antithetical to Jewish values.

‘An overwhelming majority of Jews are both pro-Israel and anti-Trump because of his incendiary rhetoric targeting our community and others, and because his symbolic gestures on Israel have not made America or Israel more secure. American Jews also reject President Trump because he’s emboldened the rise of white nationalism in America, which has directly led to increased hatred and violence targeting Jews.’

Trump was criticized for the speech by some who claimed he was insulting to American Jews.

‘Trump’s insistence on using anti-Semitic tropes when addressing Jewish audiences is dangerous and should concern every member of the Jewish community – even Jewish Republicans,’ Keyak said.

Trump also highlighted his decision to reverse more than a half-century of U.S. policy in the Middle East by recognizing Israel’s sovereignty over the Golan Heights, the strategic highlands on the border with Syria.

Israel captured the Golan Heights from Syria in the 1967 Mideast war but its sovereignty over the territory had not been recognized by the international community.

Trump has been accused of trafficking in anti-Semitic stereotypes before, including in August, when he said American Jews who vote for Democrats show ‘either a total lack of knowledge or great disloyalty.’ A number of Jewish groups noted at the time that accusations of disloyalty have long been made against Jews.

The Israeli American Council is financially backed by one of Trump’s top supporters, Miriam and her husband Sheldon Adelson, a Las Vegas casino magnate.

The couple appeared on stage at the summit to introduce Trump, with Miriam asserting that Trump ‘has already gone down in the annals of Jewish history’, and that is before he’s even completed his first term in office.

The Adelsons donated $30 million to Trump’s campaign in the final months of the 2016 race. They followed up by donating $100 million to the Republican Party for the 2018 congressional elections.

CBS CEO Moonves accused of sexual misconduct by more...
Meghan will return to Hollywood, says her pal and agent
How Australia’s most famous beach has gone from a private estate to a tourist hotspot
Democrats mock Trump for North Korea summit's 'amateur hour' as Pelosi calls Kim the 'big winner'
Pet owners are inspired to share their animal's silliest moments
Beluga whale spotted playing rugby with Gemini Craft Crew near Arctic Pole
Crowds of sun seekers escape to the outdoors to go tubing in Texas and Colorado
Italian 'orange vest' protesters take to the streets of Rome and Milan