Former South Carolina Gov. Nikki Haley said in a new interview that Charleston church shooter Dylann Roof ‘hijacked’ the Confederate flag, which is how she was able to get widespread support to stop flying it in her home state.

‘This was one of the oldest African-American churches – these 12 people were amazing people, they loved their church, they loved their family, they loved their community,’ Haley told conservative radio host Glenn Beck. ‘And here is this guy that comes out with this manifesto, holding the Confederate flag and had just hijacked everything that people thought.’

The next statement of Haley’s is raising eyebrows on the left.

‘But, you know, people saw it as service, as sacrifice and heritage,’ Haley explained. 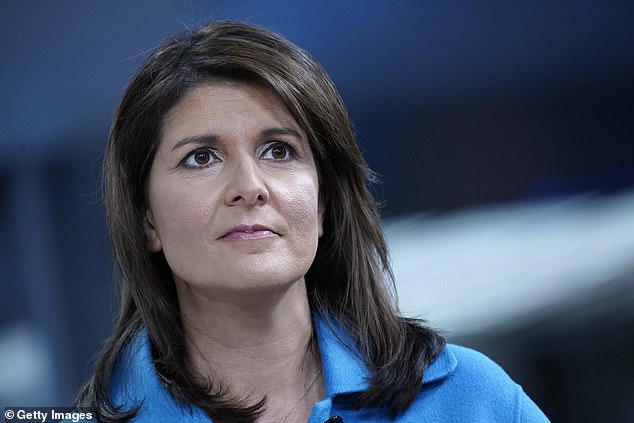 Former South Carolina Gov. Nikki Haley is getting hit from the left over comments she made in a new interview with Glenn Beck about the Confederate flag 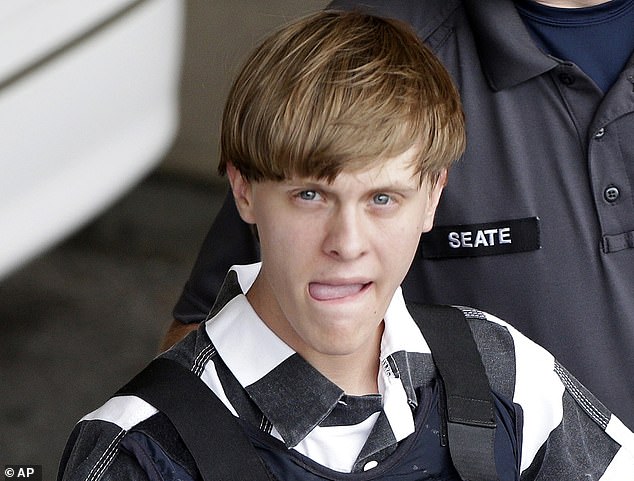 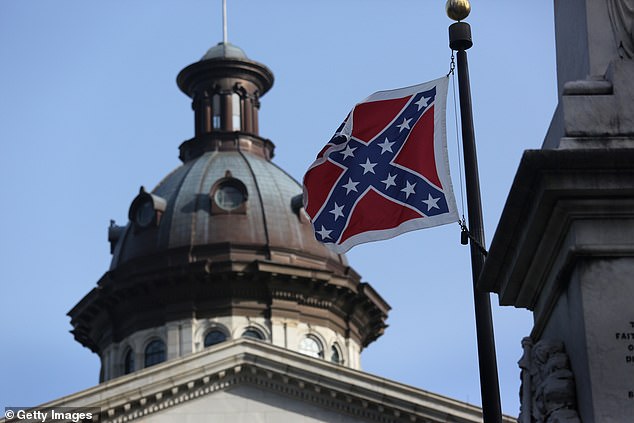 Nikki Haley was behind the flag’s removal from the South Carolina statehouse, less than a month after the church attack. Here’s it’s photographed in 2015 on its last day

‘But once he did that, there was no way to overcome it,’ she added.

Haley, who served as President Trump’s first U.S. ambassador to the United Nations, was referring to the June 2015 massacre at Charleston’s historically black Mother Emanual church, which left nine African-American worshippers dead at the hands of an avowed white supremacist.

‘Remember that brief period of time when Nikki Haley was considered the adult in the Trump Administration? Welp, she just failed 8th grade social studies with this take,’ tweeted comedian and CNN host W. Kamau Bell. ‘Unless there is another [Dylann] Roof who was a confederate general or a KKK grand wizard in 1915,’ he added.

Jonathan Capehart, an op-ed writer for the Washington Post, tweeted, ‘Hey, Nikki Haley … Confederate flag is no better than a Swastika.’

Conservatives, however, defended her, pointing to the fact that actions speak louder than words. They said her comments were mangled, as she tried to explain why some South Carolinians were still in support of flying the flag.

It was Haley who pushed for the removal of the Confederate flag – used by the pro-slavery south in the Civil War – less than a month after the mass shooting.

Friday on Twitter, she defended that decision – and stuck by her words.

‘2015 was a painful time for our state. The pain was and is still real. Below was my call for the removal of the Confederate flag & I stand by it,’ she said linking to her 2015 remarks. ‘I continue to be proud of the people of [South Carolina] and how we turned the hate of a killer into the love for each other.’

Since leaving her position at the United Nations, Haley’s next political step has been a guessing game, as rumors keep popping up that she could replace Vice President Mike Pence on the 2020 ticket – something President Trump has said wouldn’t occur.

Moment a white woman steps in and calls out a racist shopper for hurling abuse at two Hispanic women
Unruly JetBlue passenger, 32, is thrown off flight and arrested
Prince Andrew 'seen in Epstein's apartment getting a foot massage from two young Russian women'
Donald Trump puckers up to greet the ladies of the G7 dinner
Grieving father urges parents to put family life before their jobs after death of son
Elon Musk tweets first look at SpaceX's Starship Rocket with fins on ahead of upcoming announcement
'There was a lot of push back about shutting down.' Fauci said Trump could have saved more US lives
City of Seattle held segregated training session for white staff aimed at 'undoing their whiteness'