Four people were killed in South Florida after two armed jewelry thieves hijacked a UPS truck along with its driver and led cops on a high-speed pursuit that ended when the vehicle got stuck in traffic Thursday afternoon.

The chase began in Coral Gables and ended 25 miles away on a busy street in Miramar, where a shoot out erupted once the truck couldn’t go any further because of traffic.

Killed at the scene were the two suspects, the abducted UPS driver and a bystander who was inside an idle car near the mayhem, sources told the .

Jewelry store thieves in a hijacked UPS truck are pictured in a shootout with police after a high-speed chase from Coral Gables, Florida, ended when the vehicle got stuck in traffic on a highway near Miramar

Cops responded to Regent Jewelers on Mariana Avenue in less than two minutes to find that the suspects had exchanged gunfire with the store’s proprietor, Hudak said. 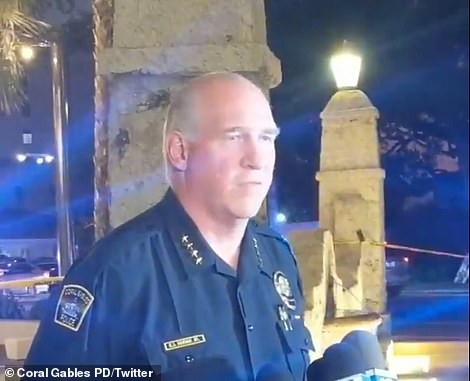 A female employee in the store was found to have been shot in the head after a gunman’s bullet ricocheted off the floor. She was later reportedly in stable condition.

One bullet was even found to have struck the Coral Gables City Hall.

City Clerk Billy Urquia told the Miami Herald he was in his office when he heard a gun shot.

He then heard a second gun shot and then the sound of a bullet piercing his window.

‘The bullet ricocheted off the wall and landed on the floor’, Urquia said Thursday night. ‘The last one I heard was the one that came in’.

The suspects then made their escape in the hijacked UPS truck, taking its driver hostage and leading authorities on a high-speed pursuit. The chase was captured by news outlets and broadcast live as the drama unfolded.

Rush-hour had started when the truck made its getaway and as many as 40 emergency vehicles pursued.

The UPS truck made its way up the Florida Turnpike, then on to Okeechobee Road and finally Interstate 75 into Broward County.

The suspects fired upon cops during the pursuit, the Miami Herald reports.

After several running several red lights and harrowing maneuvers made in an attempt to escape, the truck came to a stop on Miramar Parkway near Flamingo Road because of traffic around 5.30pm. 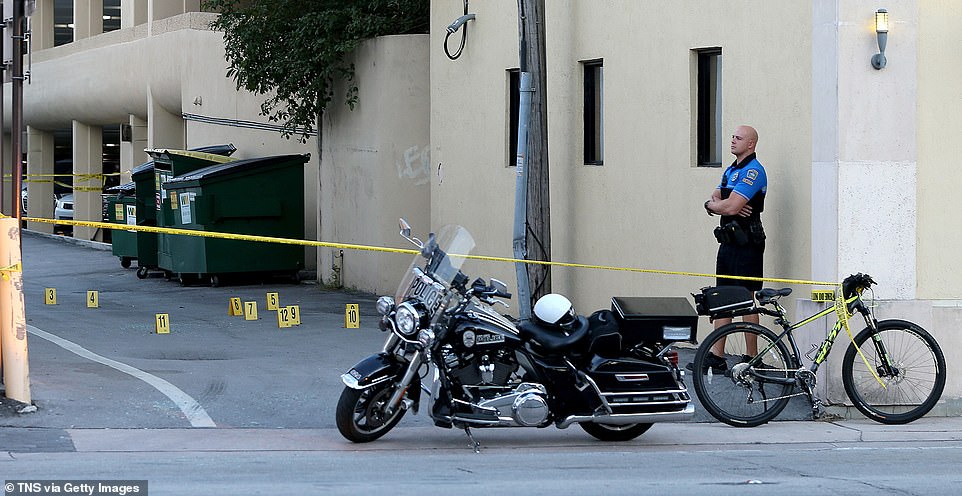 Motorists and bystanders watched as police officers frantically scrambled to stop the suspects.

Police in footage taken of the chase are then seen approaching the truck and opening fire into the vehicle, reports .

Gun shots are fired, and a man’s leg became visible in the truck’s passenger side door, followed by another man climbing over him who covered his head for protection from the spray of bullets. 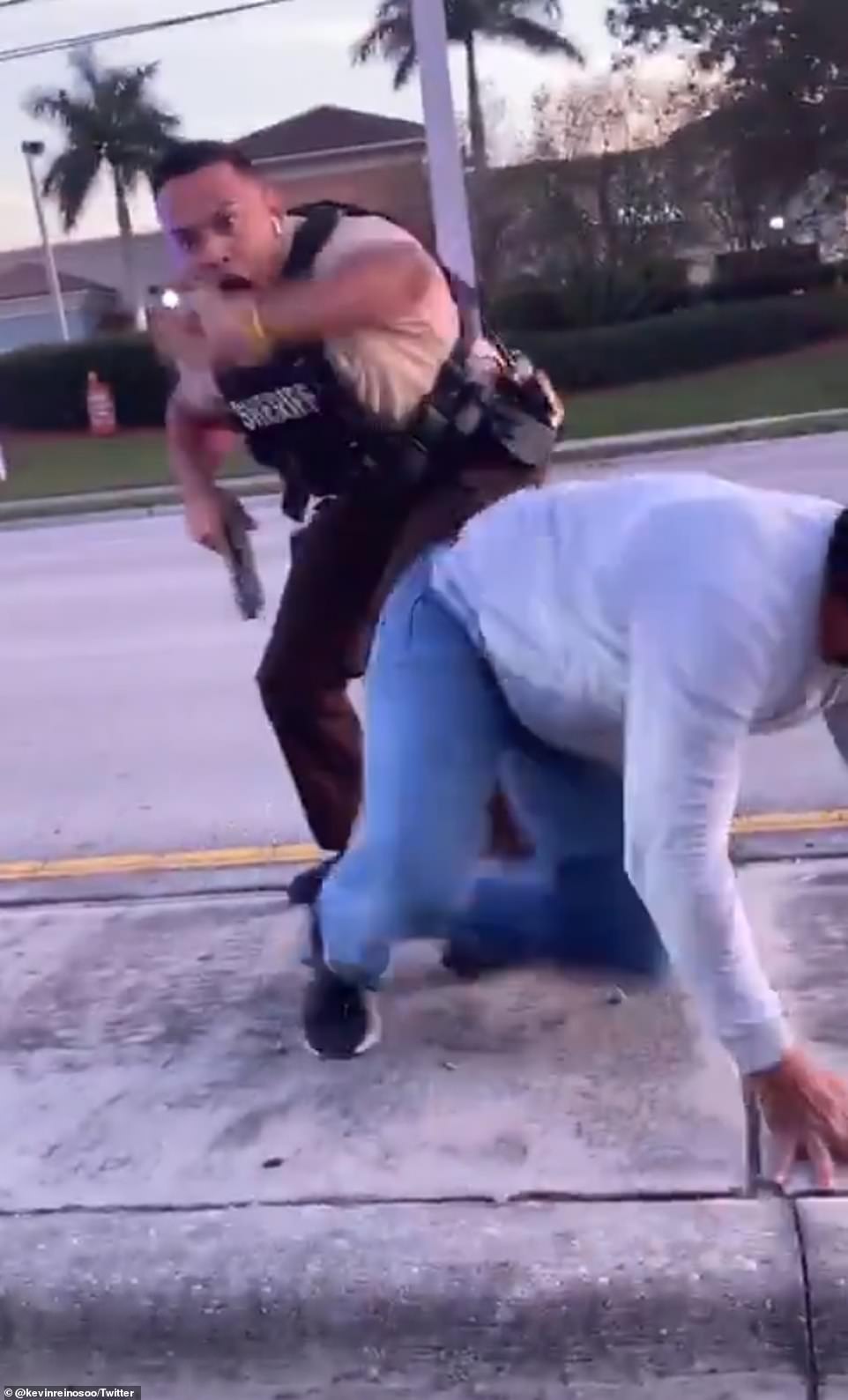 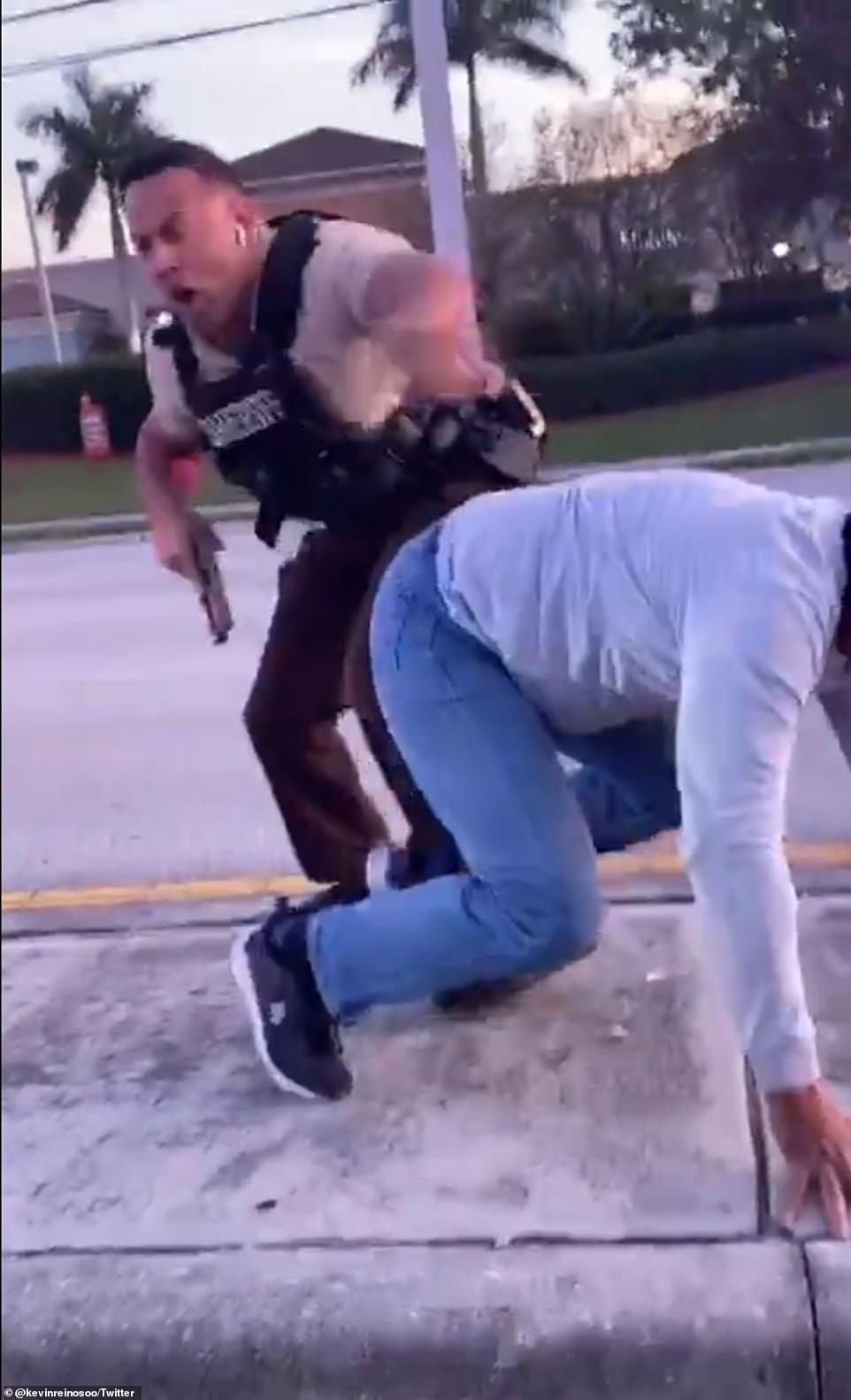 Dozens of cops arrived as blood could be seen covering the roadway.

At least one person was airlifted to an area hospital after the violence ended.

The follow up investigation includes support from the FBI.

‘This is what dangerous people do to get away’, Hudak said. ‘And this is what people will do to avoid capture’.

Hours after the chase ended, medical gauze, wrappers and other debris remained strewn across the Miramar roadway’s middle lane, next to the truck which still had its right rear door open. 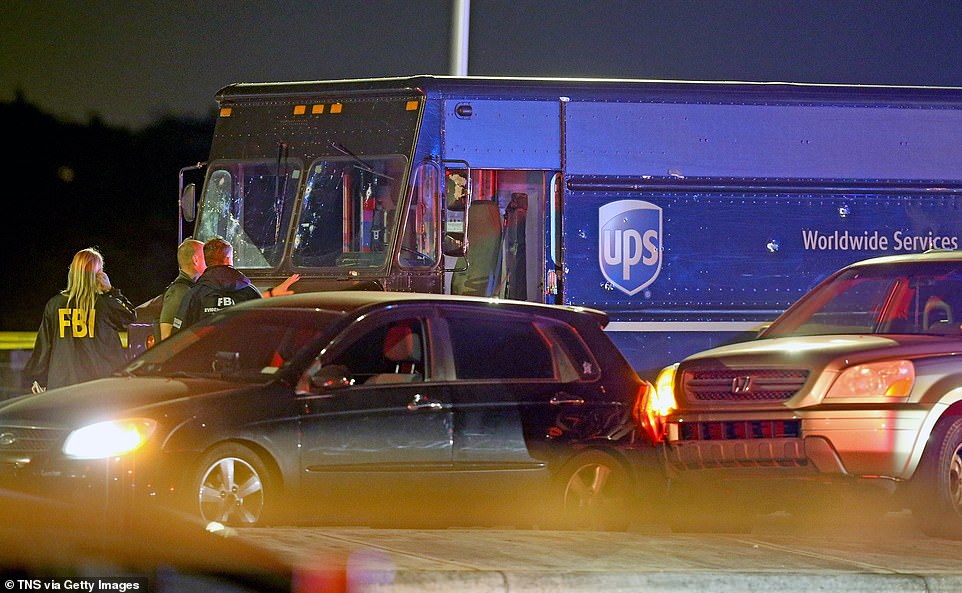 Traffic remained snarled, and it was not clear how long it would take investigators to clear the scene.

UPS spokesman David Graves said they are staying in touch with authorities. He didn’t share any information about the driver.

Jennifer Garner 'does not agree with Ben Affleck's choices'
Sky Sports presenter Simon Thomas shares sweet teddy made from late wife’s dressing gown
Father-of-four who had both ears cut off ‘with a machete’ is not expected to survive
Love Island's Megan Barton Hanson and Wes Nelson 'left inconsolable after they are robbed'
Three teenagers are hospitalised after being stabbed in nearby streets in northeast London
U.S. women's soccer team faces Chile with a chance to advance in the World Cup
Eat your pets! Emma Thompson delivers 'climate crisis' weather forecast to Extinction Rebellion demo
Eerie photos show abandoned care home which was shut down last year