Prince Andrew’ former girlfriend who was pictured with the Duke and Jeffrey Epstein at Royal Ascot says she was never friends with the billionaire paedophile and her ‘thoughts lie with his victims.’

Newly unearthed photographs this week showed Andrew, Epstein, his alleged pimp Ghislaine Maxwell, and the Honorable Caroline Neville, who briefly dated the Duke in 1993, at Ascot racecourse in June 2000.

Andrew’s former flame, Lady Derby, was also pictured with her husband, Edward Stanley, and tonight denied she was ever friends with shamed sex offender Epstein.

The Duke of York, and Lady Derby, affectionately known as Cazza, only dated for a short period of time, and later that year she announced her engagement to the 19th Earl of Derby.

Her spokesman said: ‘She [Lady Derby] has asked me to pass on that she has never had a friendship with Mr Epstein and her thoughts lie, first and foremost, with the victims of Mr Epstein’s abuse.’

Pictured in June 2000, Prince Andrew had been introduced to Epstein just months before by Miss Maxwell, then known for being the daughter of newspaper tycoon Robert Maxwell.

Epstein, dressed in a top hat and morning suit, has a grin across his face as he walks with Miss Maxwell and the Duke of York through the heart of the British establishment.

Miss Maxwell, who walks in between the prince and Epstein, is obscured by the hat of the Honorable Caroline Neville, a former society girl and former flame of Andrew, who is walking in front of her. 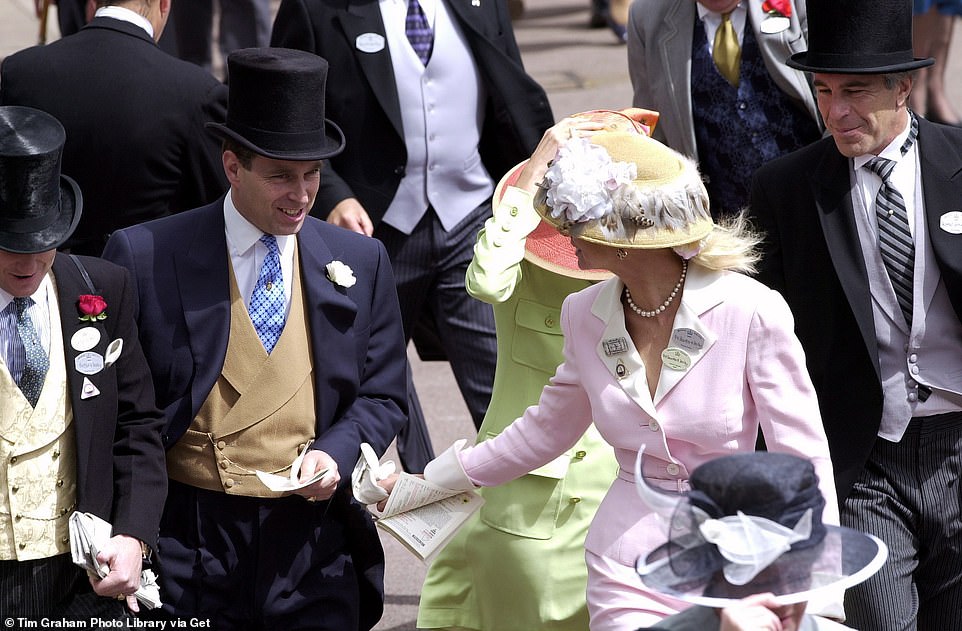 Prince Andrew, left, was pictured with Ghislaine Maxwell, centre,  in a green jacket, Jeffrey Epstein, right, and the Duke’s former girlfriend Caroline Neville, with whom he had a brief fling in 1993, wearing a pink suit at Royal Ascot in 2000 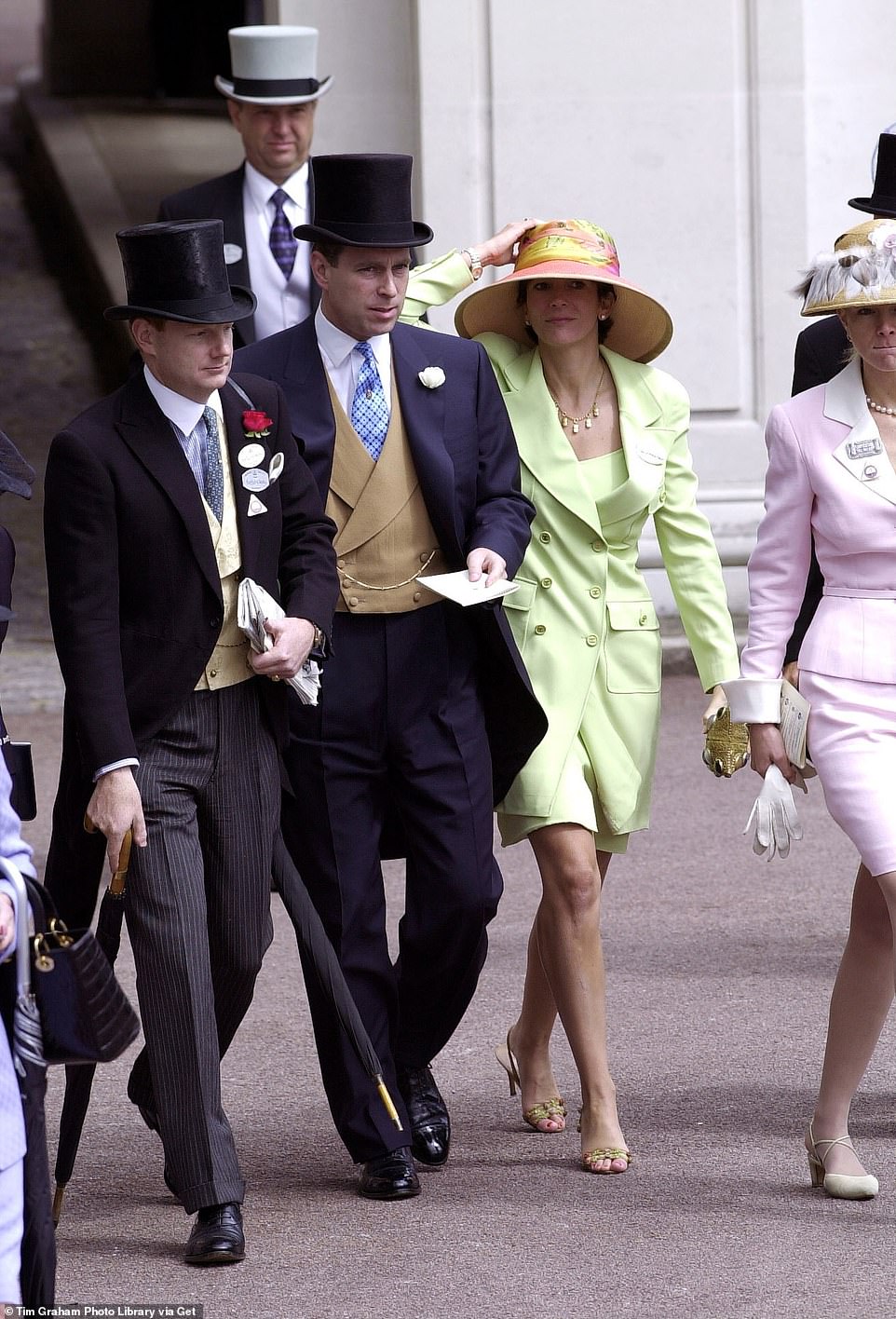 The Duke of York was seen with Ms Maxwell and Ms Neville a former high society IT girl who is the daughter of Lord Braybrooke, far right, and Ms Neville’s husband Edward Stanley, 19th Earl of Derby, far left, at Royal Ascot on June 22, 2000

It was during this time that Miss Maxwell and Epstein were to attend Windsor Castle, just a few miles from the racecourse, as guests of the prince for his birthday.

The Dance of the Decades, a lavish party hosted by the Queen, celebrated four royal birthdays, including Prince Andrew’s 40th, the Princess Royal’s 50th, the Queen Mother’s 100th and Princess Margaret’s 70th.

In Prince Andrew’s interview with Newsnight last month he said Epstein was there at his invitation, not the Royal Family’s. He added that the financier was Miss Maxwell’s ‘plus one.’

The prince was photographed with Miss Maxwell at several other private functions in the UK and the US that year.

At the wedding of his former girlfriend Aurelia Cecil in Wiltshire in September 2000 and at a ‘Hookers and Pimps’ themed Halloween Party in Manhattan.

And finally, Miss Maxwell and Epstein were seen together at Sandringham in December of that year to attend what the prince has described as a ‘straightforward shooting weekend.’

Early the following year, in the most infamous photo of all, the Duke of York was pictured with his arm around the waist of 17-year-old Virginia Roberts with Miss Maxwell stood in the background.

Ms Roberts, now known as Virginia Giuffre, told BBC’s Panorama on Monday night that she was trafficked to London by Epstein and instructed to have sex with Prince Andrew, prior to the photo being taken in Miss Maxwell’s Belgravia townhouse.

Ms Giuffre told Panorama: ‘The people on the inside are going to keep coming up with these ridiculous excuses – like his arm was elongated or the photo was doctored, or he came to New York to break up with Jeffrey Epstein. I mean, come on, I’m calling BS on this, because that’s what it is.’ 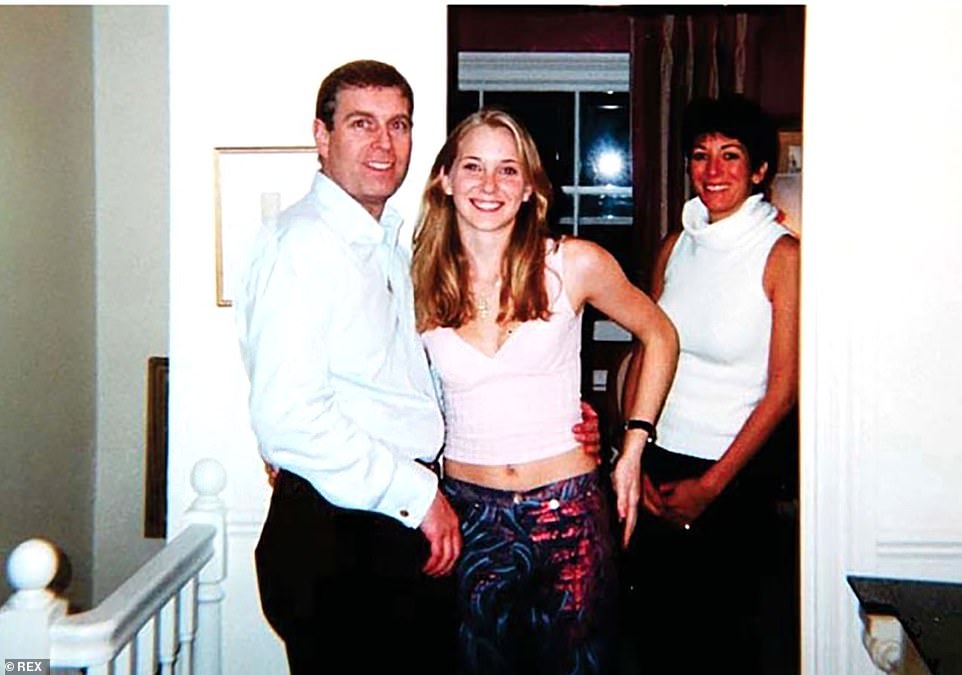 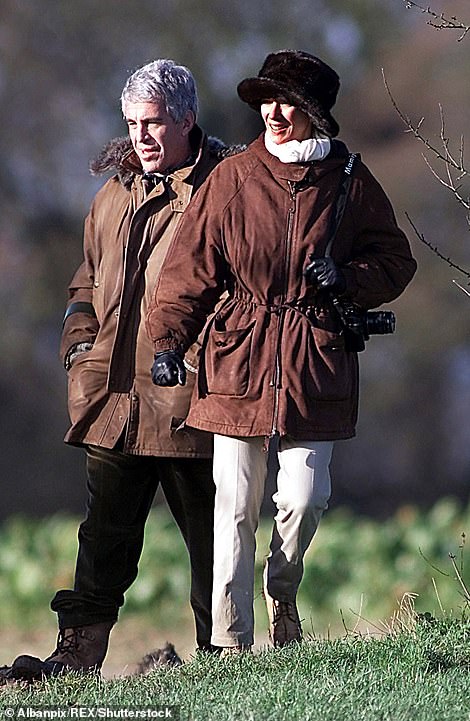 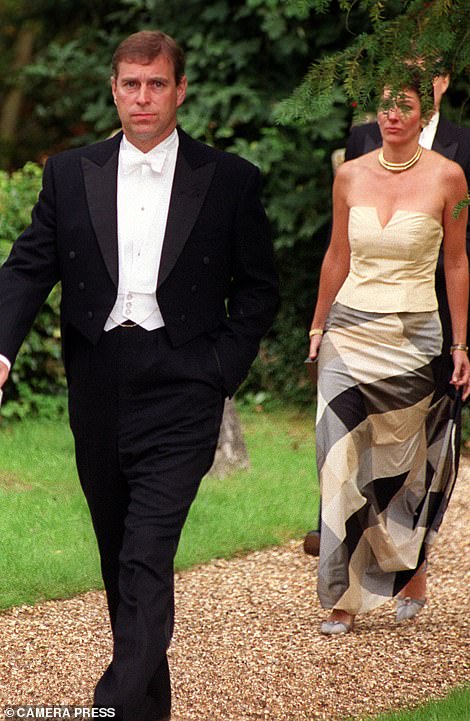 The 35-year-old said that after leaving Tramp nightclub with Prince Andrew: ‘In the car Ghislaine tells me that I have to do for Andrew what I do for Jeffrey.

She said: ‘There was a bath and it started there and it led into the bedroom. It didn’t last very long the whole entire procedure. It was disgusting.

‘He wasn’t mean or anything. But he got up and said thanks and walked out. And I sat there in bed just felt horrified and ashamed and and felt dirty.’

She added: ‘I had just been abused by a member of the royal family.’ 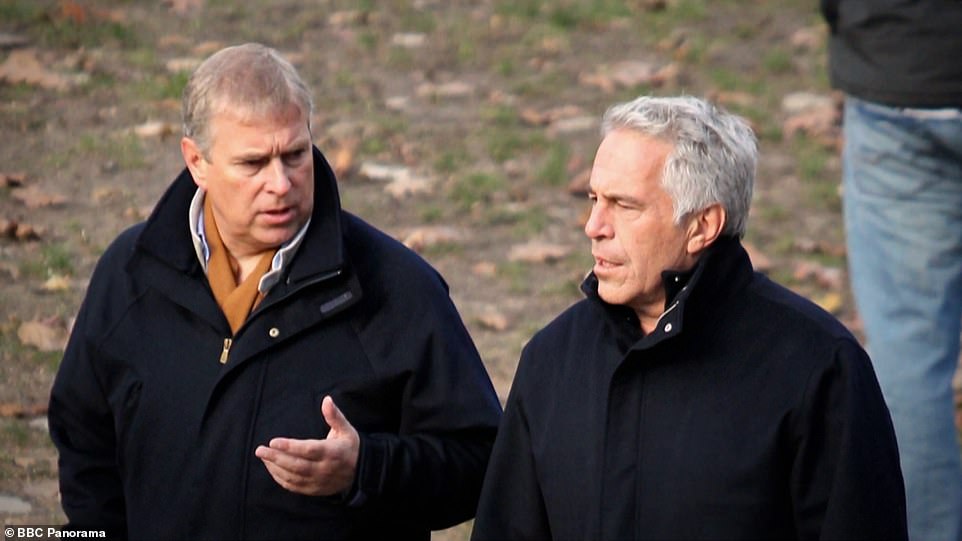 Prince Andrew and Jeffrey Epstein in Manhattan in 2010. The duke quit his role as UK trade envoy the following year in the wake of the fallout from the Central Park photos 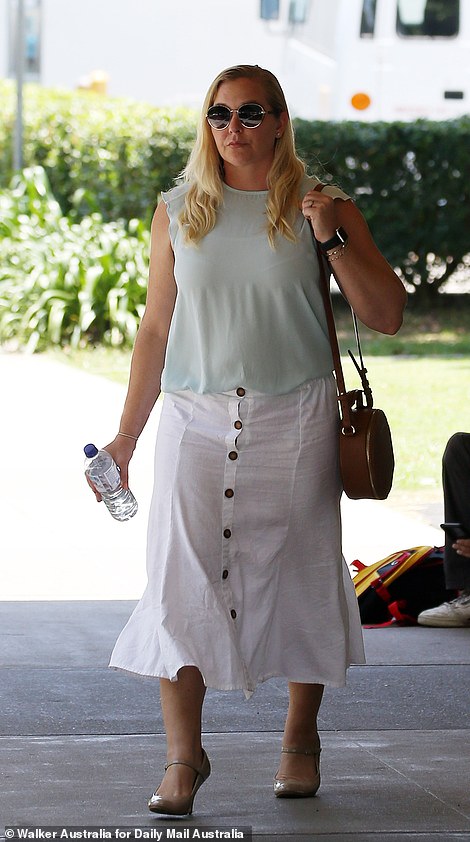 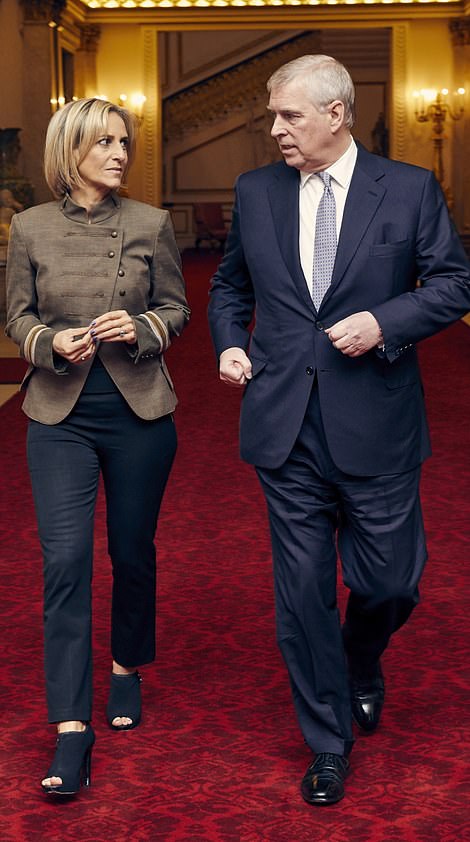 Virginia Roberts,  pictured left just days ago, is appearing on BBC Panorama on Monday night after Prince Andrew (right with Emily Maitlis) denied having sex with her on Newsnight last month

The Duke of York emphatically denies any form of sexual contact or relationship with Virginia Giuffre and says he has no recollection of meeting her.

‘It’s very difficult to be able to prove it but I don’t remember that photograph being taken…That’s me but whether that’s my hand…I have simply no recollection of the photograph ever being taken.’

Andrew, 59, has categorically denied having sex with Ms Giuffre and apologised for his association with Epstein, who died in prison in August in what New York City officials said was a suicide.

The disgraced prince has stepped down from royal duties ‘for the foreseeable future’ because of his friendship with Epstein.

The scandal is one of the worst to have gripped the royal household in recent decades and has severely tarnished the reputation of Andrew.

Andrew first meets Epstein, reportedly introduced through his friendship with Ghislaine Maxwell, the daughter of newspaper tycoon Robert Maxwell. Andrew welcomes Epstein to the Queen’s private Scottish retreat in Aberdeenshire. Andrew later says he sees Epstein ‘infrequently’, adding ‘probably no more than only once or twice a year’.

Andrew and Ms Maxwell are seen on holiday with Epstein at Donald Trump’s Mar-a-Lago Club in Palm Beach, Florida. Epstein and Ms Maxwell attend a party at Windsor Castle hosted by the Queen to mark Andrew’s 40th birthday, the Princess Royal’s 50th, the Queen Mother’s 100th and Princess Margaret’s 70th.

Epstein admits prostituting minors and is sentenced to 18 months in prison.

Epstein is released from jail. Andrew is photographed with the disgraced Epstein in New York’s Central Park. Footage emerges years later, reportedly shot on December 6 2010, showing him inside Epstein’s Manhattan mansion, from where he is seen looking out from a large door of the property waving a woman goodbye after Epstein leaves to get into a chauffeur-driven car.

The duke quits his role as UK trade envoy after the fallout from the Central Park photos.

Buckingham Palace denies Andrew has committed any impropriety after he is named in US court documents related to Epstein. A woman, later named in reports as Ms Roberts, alleges in papers filed in Florida that she was forced to have sex with Andrew when she was 17, which is under the age of consent in the state.

At the World Economic Forum in Davos, Andrew, in his first public engagement since he was embroiled in the allegations, responds, saying: ‘Firstly I think I must, and want, for the record, to refer to the events that have taken place in the last few weeks.

‘I just wish to reiterate, and to reaffirm, the statements that have already been made on my behalf by Buckingham Palace.’ In April the claims against Andrew are struck from US civil court records following a federal judge’s ruling.

Newly released legal documents show that Johanna Sjoberg, another alleged Epstein victim, claimed Andrew touched her breast while sitting on a couch inside the US millionaire’s Manhattan apartment in 2001. Buckingham Palace said the allegations are ‘categorically untrue’. Epstein is found dead in his jail cell on August 10, having killed himself after being charged with sex trafficking.

Later that month a pilot on Epstein’s private jet claims Andrew was a passenger on past flights with the financier and Ms Roberts. The Sun newspaper reported that David Rodgers said in a testimony released in August that Epstein, Andrew and the-then 17-year-old travelled to the US Virgin Islands on April 11 2001. Buckingham Palace describes the evidence statement as having ‘a number of inconsistencies’ and said that Andrew was on a different continent in some cases.

Following Epstein’s death, a statement from the palace says that Andrew is ‘appalled by the recent reports of Jeffrey Epstein’s alleged crimes’. Breaking his silence on the issue for the first time since 2015, Andrew then releases a statement on August 24 saying: ‘At no stage during the limited time I spent with him (Epstein) did I see, witness or suspect any behaviour of the sort that subsequently led to his arrest and conviction.’

On November 16, the prince gave a ‘disastrous’ BBC interview in which he spoke about his friendship with Epstein and addressed allegations of his own sexual conduct. He faced a barrage of criticism following his television appearance, with the royal accused of a lack of empathy with Epstein’s victims.

During the interview, Andrew, questioned by Newsnight presenter Emily Maitlis, twice stated his relationship with Epstein, who died in jail while facing sex trafficking charges, had some ‘seriously beneficial outcomes’, giving him the opportunity to meet people and prepare for a future role as a trade envoy. The duke denied he slept with Virginia Giuffre, one of Epstein’s victims, on three separate occasions, twice while she was underage, saying one encounter in 2001 did not happen as he spent the day with his daughter Princess Beatrice, taking her to Pizza Express in Woking for a party.

The same alleged sexual liaison, which the American said began with the royal sweating heavily as they danced at London nightclub Tramp, was factually wrong as the duke said he had a medical condition at the time which meant he did not sweat. He cast doubt on the authenticity of a picture that appears to show Andrew with his arm around the waist of Mrs Giuffre, when a teenager.