A British tourist has slammed Aussie farmers for ‘leaving cows to die’ in hot fields after discovering piles of bodies by the roadside.

The English animal rights activist, known as Mooing Mippy, launched an extraordinary rant after she found cow carcasses in a field, writing ‘shame on Aussie farmers.’

Sharing the video on her YouTube channel, Mippy accused farmers of leaving the cows bodies to rot ‘in front of their friends and family’. 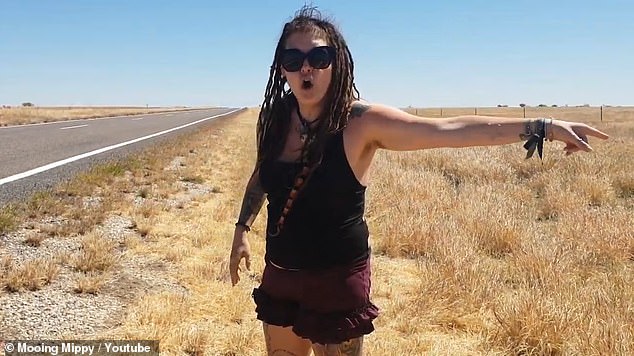 ‘Shame on Aussie farmers!’ The vegan activist (pictured) launched into a blistering attack after finding piles of dead cow carcasses, which she claimed had been left to rot in front of the herd

She had been driving from Darwin to Queensland when she made the discovery.

‘The farmer hasn’t even bothered removing their bodies, they’ve started to decay.

‘This is their family members for crying out loud. They live in herds. They form emotional ties with their friends, cows have been known to have best friends and everything.’

Farmers have been battling with droughts across huge swatches of Queensland and the Northern Territory, which have made it difficult to care for cattle.

Currently, droughts have been declared in 66.1 per cent of the land area of Queensland.

Droughts also worsen the effects of disease and parasites.

The cows were discovered near fence posts as they desperately tried to find shade from the blistering sun.

‘This is not OK,’ Mippy added.

‘These poor animals are having to live round their bloody, their own friends and their family, dead ones, decaying. Those who are dying slowly and they have to watch them die at the fence while everybody drives past.

She then points out dozens of dead cow carcuses and piles of bones, which have been left to rot in the hot sun.

The heavily tattooed activist walked over to the carcasses, calling it ‘disgusting’.

Accusing farmers of discriminating against cows and sheep, she says they would be treated differently if they were domesticated animals, such as dogs and horses.

‘If you did that to dog you would be done under animal welfare laws,’ she said.

‘This happens all over Australia and is the equivalent of a dog in a hot car.

‘In Victoria a few months ago in summer we had a really, really hot day and 88 cows died of heat stress in one field.

‘We never get told the figures of how many animals die in fields in Australia which are given no rights to bloody shade, nothing.

‘If you’re a cow, a sheep, you’re given no shade, nobody bats an eyelid. But if you’re a horse or a dog left out in 50 degree heat, everyone’s up in arms. But these animals are suffering.’

Pointing at a pile of dead bodies, she said: ‘Can you imagine that being your son, your daughter, your brother, your sister, and then you see them die slowly? And then you come and mourn at their feet?’

She said the grim scene was a ‘common sight’ in Australia, and said the public needed to ‘wake up and realise’ that the cows ‘feel pain and suffer’.

‘These animals are dying of heat stress.

‘If you’re a farmer and you love animals, is this what love looks like?

‘I’m sick of it. There’s a track here and the farmer can drive up and check the cows are alright but instead they’re suffering, they’re dying slowly in front of their own family.’

The RSPCA advises farmers to ensure cattle have access to shelter or shade, despite them having natural coping mechanisms to help deal with the heat. 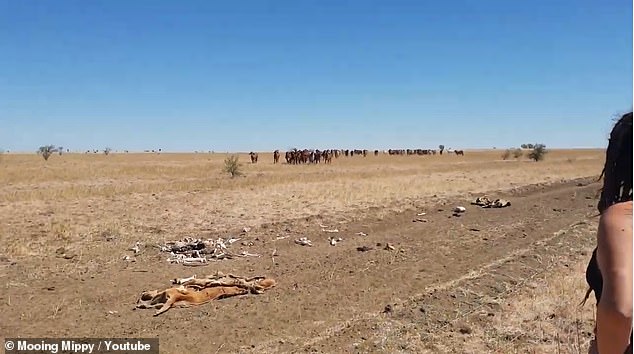 ‘While farm animals have various ways of coping with heat, a very important one is to seek shelter or shade,’ a spokesman said.

‘Shade helps reduce heat loading from the sun, especially for dark-coloured animals that readily absorb heat. In the absence of adequate shade, animals will try to find any scrap of shade they can — it could be from a fence post or another animal’s shadow.’

He added that some breeds are more adaptable to hot, dry conditions than others.

‘Brahmans cope best while Herefords and dairy cattle such as Friesians and Jerseys don’t’, he explained.

In February, Queensland farmers were faced with hundreds of thousands of dead cows after devastating floods left them starving.

The state was hit with two years worth of rain in less than two weeks, turning roads into river and paddocks into lakes.

Bodies of the dead cattle crowded fields as floodwaters receded, the animals having either starved to death or been too badly battered by the elements.

Farmers expected supply drops of hay to feed what was left of their herds, but the ADF refused to deliver the tonnes of supplies on safety grounds.

Melania Trump is on-theme in $1,000 military-inspired Victoria Beckham jacket for trip to Iraq
Saved by his dad: Two-year-old boy survives mosque terror attack
Tattoo artist, 25, is found GUILTY of raping and murdering schoolgirl Lucy McHugh
Dean Saunders jailed: Liverpool and Aston Villa star to serve 10 weeks jail time
ICC probes claims SAS and Black Watch soldiers tortured civilians in Iraq and Afghanistan war crimes
Top UK diplomat in the US quits just before election with a blast at Boris Johnson over Brexit
PIERS MORGAN: By playing this despicable race card Meghan and Harry have libeled all of Britain
Map reveals how the coronavirus outbreak has rapidly spread across the world