Gabrielle Union’s sudden ousting from has sparked a SAG-AFTRA investigation.

The Screen Actors Guild, the largest actors union, announced it would probe Union’s axing from the NBC show where she served on the judge panel for season 14.

She allegedly complained about racially insensitive jokes and toxic environment before she was fired.

‘We take issues of workplace health and safety very seriously. We immediately reached out to Ms. Union’s representatives when these reports came to light,’ the SAG-AFTRA told DailyMail.com in a statement.

‘It is our practice to work closely with members who reach out to us and their representatives in instances like this, as that usually affords the best protection and best resolution for the affected member,’ the statement added. 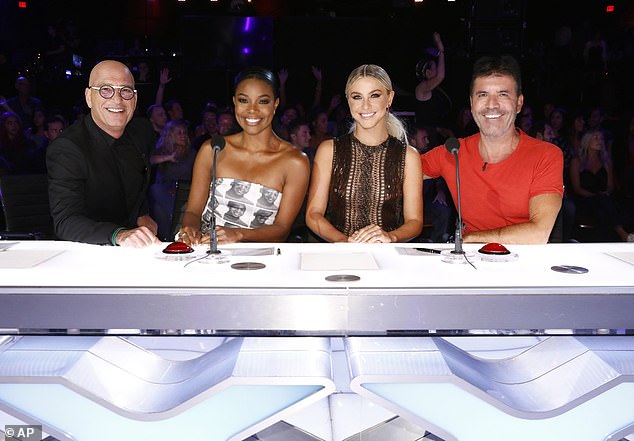 The Screen Actors Guild has opened an investigation into Gabrielle Union’s firing from America’s Got Talent, which was revealed last week. Union pictured with Season 14’s panel of celebrity judges (from left to right) Howie Mandel, Julianne Hough and Simon Cowell 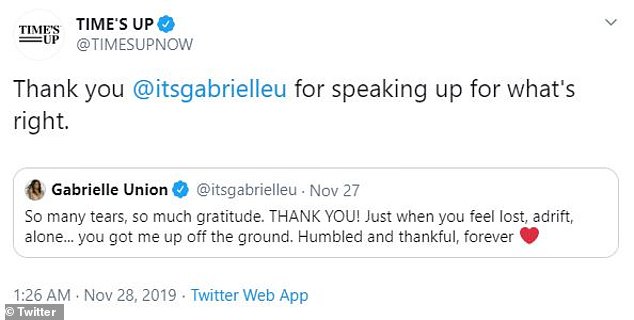 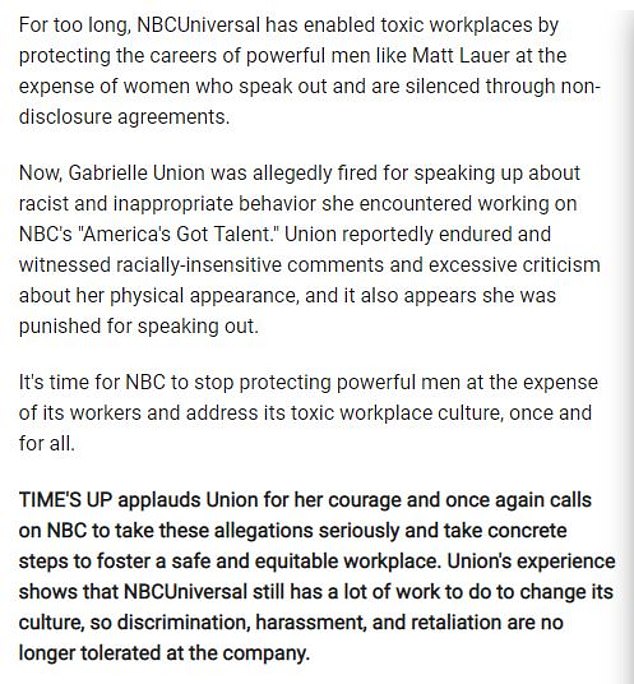 Time’s Up shared this statement throwing their support behind Union. They referenced the string of allegations against Matt Lauer as one of the examples

‘For certain matters, our investigation and enforcement needs to happen independently and we are prepared to handle this issue accordingly, as warranted. Our enforcement action is usually handled confidentially to protect the member involved, and we typically do not publicize these matters unless the member requests that we do so,’ it added.

Union officials said the investigation has already begun but there is nothing to report just yet.

SAG-AFTRA is yet to reply to DailyMail.com’s request for comment.

NBC also said they would launch an investigation into her firing, along with Simon Cowell’s production companies Syco Entertainment and Fremantle, in a statement on Sunday.

The probe comes after women’s advocacy group Time’s Up condemned her firing, tweeting: ‘Thank you #itsgrabrielleeu for speaking up for what’s right.’

Time’s Up called out NBCUniversal for enabling ‘toxic workplaces’ by ‘protecting the careers of powerful men’, while citing the Matt Lauer scandal.

‘Now, Gabrielle Union was allegedly fired for speaking up about racist and inappropriate behavior she encountered working on NBC’s America’s Got Talent. Union reportedly endured and witnessed racially-insensitive comments and excessive criticism about her physical appearance, and it also appears she was punished for speaking out,’ the Time’s Up  said.

‘TIME’S UP applauds Union for her courage and once again calls on NBC to take these allegations seriously and take concrete steps to foster a safe and equitable workplace. Union’s experience shows that NBCUniversal still has a lot of work to do to change its culture, so discrimination, harassment, and retaliation are no longer tolerated at the company,’ it added. 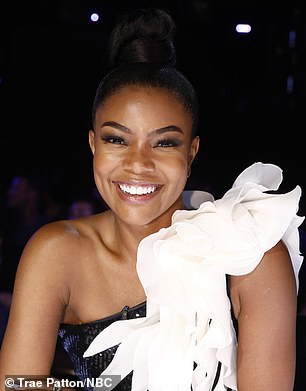 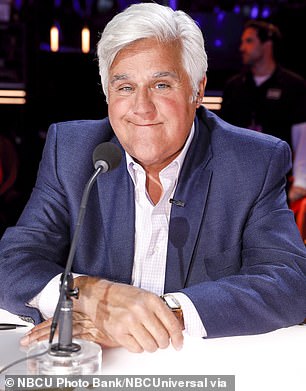 Union allegedly complained severally racially insensitive incidents including one where guest judge Jay Leno made an anti-Korean slur on the show back in April. 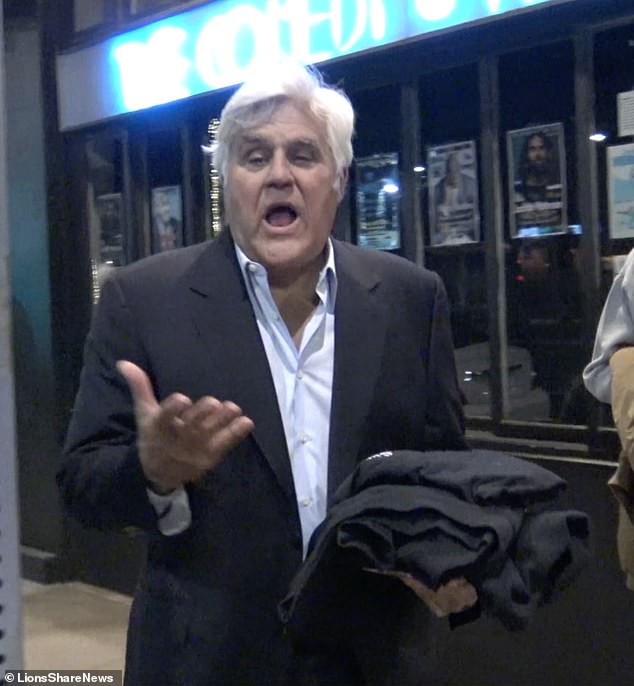 On Sunday night Leno made his first public comments since Union’s firing. He brushed over his racist joke and said: ‘I love Gabrielle Union, she’s a great girl. I really enjoyed working with her, she’s really good’

The investigation was announced Monday, one day after Simon Cowell’s company broke its silence on the firing scandal.

In a statement Fremantle and Syco said they were working with Union through her representatives to hear and address her concerns with the set.

‘We are working with Ms. Union through her representatives to hear more about her concerns, following which we will take whatever next steps may be appropriate,’ the statement said.

A  report on her firing claimed that Union allegedly complained after Jay Leno made an anti-Korean slur during his guest appearance on the show back in April.

Leno finally spoke on that joke while leaving his  special set at The Comedy & Magic Club in Hermosa Beach, California on Sunday night by touting his love and support for Union.

Jay – who guest starred in an episode which aired in April – said: ‘I love Gabrielle Union, she’s a great girl. I really enjoyed working with her, she’s really good.’

Pompeo was one of the first stars to speak out against NBC for its ousting of Union, posting a series of tweets about the toxic work environment of show business

Leno said: ‘I don’t know but I think she’s a great girl’

Union also complained that she allegedly received more than half a dozen notes criticizing hairstyles as ‘too black’ for the show’s core audience, according to four sources with direct knowledge.

Taking to Twitter late Wednesday, her husband basketball star Dwayne Wade inferred that Variety’s report was accurate, stating that his wife is ‘an advocate for our community and culture’.

‘As proud as I was of her being selected as a judge on #AGT — I am even more proud of her standing up for what she stands for and that’s US,’ the Miami Heat shooting guard wrote.

Meanwhile, sources at NBC are now claiming to be ‘puzzled’ by the fact that Union was not invited to return to the show’s 15th season next year.

Wade took to Twitter Wednesday morning, where he addressed the report

One network insider told The New York Post on Thursday that the star had a ‘productive conversation’ with producers following Leno’s alleged slur – joke that a painting of executive producer Simon Cowell surrounded by his dogs looked like something one might see ‘on the menu at a Korean restaurant’.

Among the celebrities who have rallied publicly behind Union are ‘Grey´s Anatomy’ star Ellen Pompeo, Holly Robinson Peete and Patricia Arquette.

‘I´m just catching up on this. This is terrible,’ Arquette tweeted. ‘You should not be penalized for trying to have a workplace that honors the rule of law in the workplace.’

The actress wrote: ‘It’s unfortunate that @nbc the same network that protected disgusting men like Matt Lauer and punished women for speaking out or not putting up with it…has not changed their practices or culture.

‘I support @itsgabrielleu commitment to speaking up to injustice. It takes courage.’

Pompeo was one of the first stars to speak out against NBC for its ousting of Union, posting a series of tweets about the toxic work environment of show business.