An elderly couple were allegedly caught having sex on a sidewalk in front of a 12-year-old on Thanksgiving night.

Susan Roscillo, 70, and Robert Kellogg, 60, were arrested after the young victim said they exposed themselves outside the Capitol Theater in Clearwater.

Investigators say the pair, who are homeless, are being held on $10,000 bond.

They have each been charged with lewd and lascivious exhibition, reports. 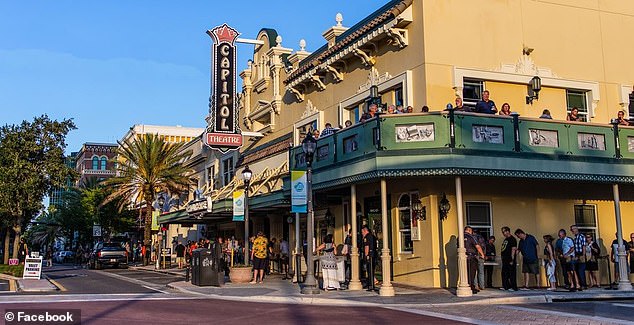 The young victim said Roscillo and Kellogg exposed themselves outside the Capitol Theater in Clearwater, pictured. The incident is said to have taken place last Thursday

The incident is said to have taken place shortly before 9pm last Thursday.

Kellogg reportedly told police he did have public sex with Roscillo, admitting it was ‘wrong’ and apologizing.

The affidavit says Roscillo was ‘extremely uncooperative and continued to scream that she wanted a lawyer’.

Both defendants were reported to be under the influence of alcohol.

Roscillo had already been arrested after drinking a can of beer on the street earlier this month.

Kellogg has previously been arrested and accused of a number of offences, including trespassing, disorderly intoxication and battery on a law enforcement officer.