She utters a mere seven words over the course of The Irishman’s three-and-a-half hour runtime.

As a result, Anna Paquin’s role in Martin Scorsese’s new mobster epic has been hotly debated on Twitter since the film was released in select theaters on November 1.

Now her co-star Robert De Niro, 76, has come to the defense of the 37-year-old actress’ performance, according to . 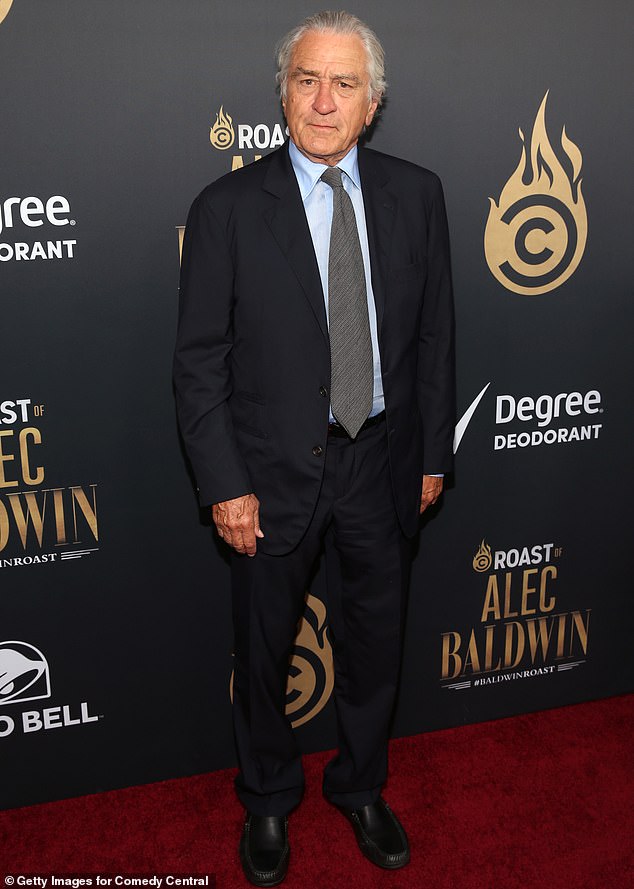 Same team: Robert De Niro, 76, came to the defense of his Irishman co-star Anna Paquins’ performance, which only features seven words, according to USA Today; pictured in September

‘She was very powerful and that’s what it was,’ said the longtime Scorsese collaborator.

De Niro acknowledged that there were multiple ways to develop the character, but he stood by the mostly silent part as written.

‘Maybe in other scenes there could’ve been some interaction between Frank and her possibly, but that’s how it was done. She’s terrific and it resonates.’ 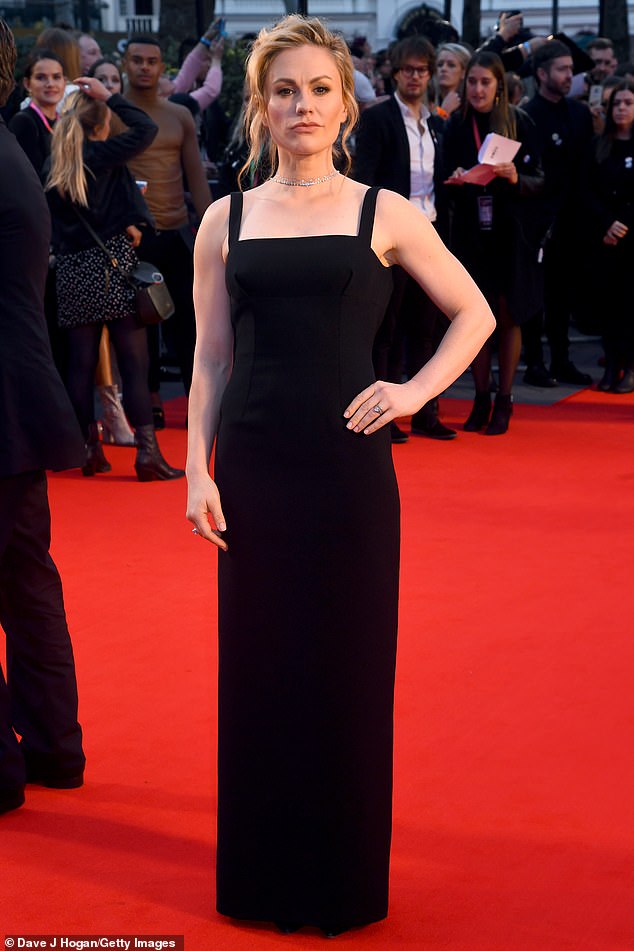 Strong performance: ‘She was very powerful and that’s what it was,’ Robert said of Anna. ‘Maybe in other scenes there could’ve been some interaction between Frank and her possibly, but that’s how it was done. She’s terrific and it resonates’; pictured October 13

At the same time, he works covertly as a mob hitman, who claimed to have assassinated Hoffa and gangster ‘Crazy Joe’ Gallo toward the end of his life.

Anna plays his daughter Peggy Sheeran as an adult. Initially traumatized by his violent reactions as a child, she comes to shun him in later life.

It’s not until their family friend Hoffa gone missing that she finally speaks, near the end of the lengthy film. 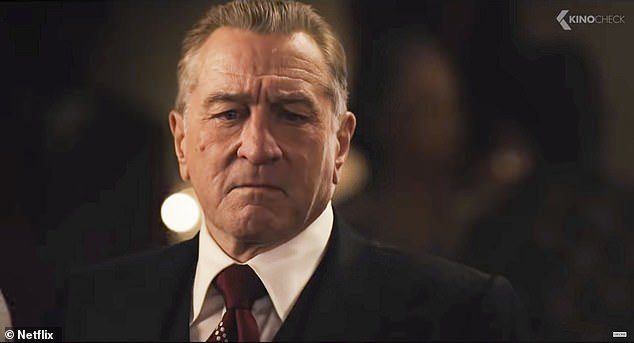 Two roles: Robert plays Frank Sheeran, a Teamsters union official who worked closely with union president Jimmy Hoffa (Al Pacino), before murdering him for the mafia; still from The Irishman 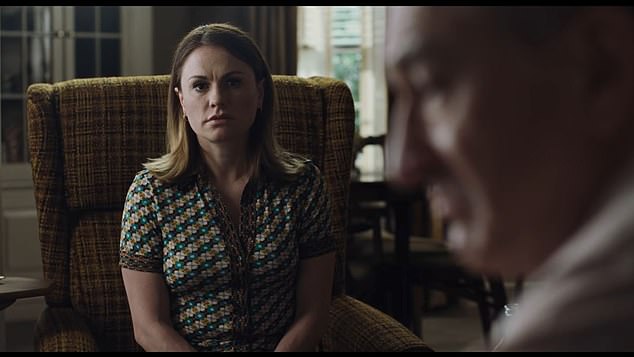 Stunning moment: After Hoffa goes missing, his daughter Peggy (Anna Paquin) finally speaks. She asks why he hasn’t called Hoffa’s wife, though she suspects her father is responsible; still from The Irishman

After Frank tells his family he hasn’t yet called Hoffa’s wife, she asks, ‘Why? Why?’ while flashing a piercing glare.

‘Why haven’t you called Jo?’ she asks after Frank doesn’t understand what she means.

The True Blood star seethes with fury in the otherwise quiet moment, and a shamed Frank then makes a stammering call to the wife of the man he murdered days earlier in one of the film’s most emotional scenes.

Critics have largely lauded the film as one of Scorsese’s best, and it currently holds a sterling 96 percent fresh score on Rotten Tomatoes, with 100 percent of the sites top critics lauding it.

But viewers took to Twitter shortly after the film hit theaters earlier this month, then again in waves once it was released on Netflix on Wednesday to lambaste Paquin’s lack of lines.

No respect: Some Twitter users weren’t happy about Anna’s seven words of dialogue, especially considering her standing in the industry

TV writer and Keep It podcast host Ira Madison III saw Anna’s lack of dialogue as part of a pattern of misogyny in Scorsese’s filmography, though he praised the film overall.

‘Scorsese rarely services women in his film but (expletive) they might as well not even be in this film,’ he said in a now-deleted tweet. ‘Anna Paquin did a lot of staring and quivering her lip and we’ve all seen enough of that in True Blood sis.’

But Anna took to Twitter herself earlier this month to defend the role and her choice to appear in The Irishman.

‘Nobody was doing any “ordering,” she tweeted. ‘I auditioned for the privilege of joining the incredible cast of @TheIrishmanFilm and I’m incredibly proud to get to be a part of this film.’ 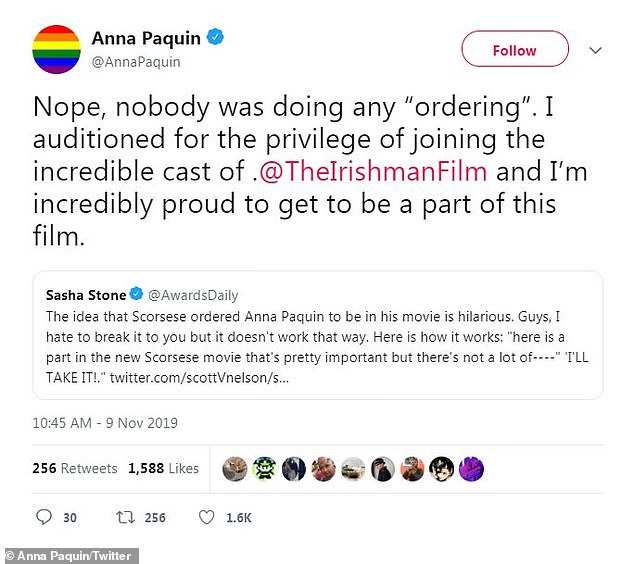 Standing up for herself: But Anna took to Twitter herself earlier this month to defend the role and her choice to appear in The Irishman, calling it a ‘privilege’ to be part of an ‘incredible cast’ 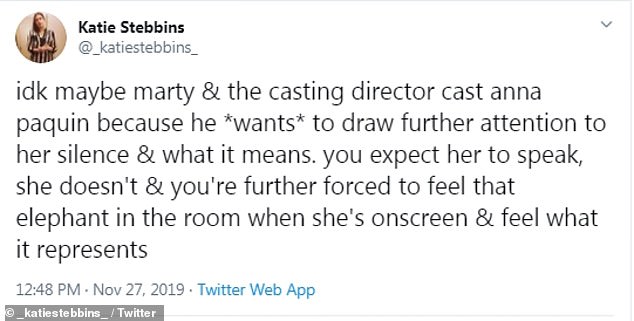 Defenders: Other Twitter uses defending Anna’s casting, suggesting that her stature and silence were the point of the character

Other users came to Paquin’s defense, suggesting that her silence was important in illustrating the fear and loathing Sheeran had instilled in his own family thanks to his violent and immoral ways.

It took more than a decade for Scorsese and De Niro to bring The Irishman to fruition, and the Netflix film had a whopping $159 million budget, more in line with contemporary superhero films thanks to its prestigious cast and extensive use of digital de-aging technology.

The movie is expected to be a major Oscar contender, and De Niro, Pacino and their co-star Joe Pesci are all considered frontrunners in the leading and supporting acting categories. 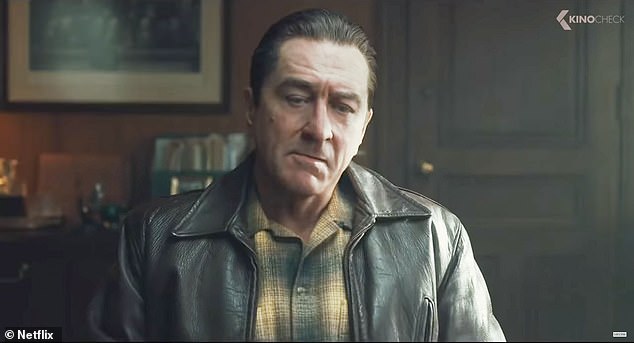 Expensive: The Irishman cost a whopping $159 million, thanks to its prestigious cast and extensive use of digital de-aging technology, putting it it in line with a superhero film’s budget