Pete Buttigieg made a personal call to a senior writer at The Root to hash it out after the black columnist called the 2020 candidate a ‘motherf****r.’

‘Kids need to see evidence that education is going to work for them,’ Buttigieg explained in a nearly-hour-long interview with local television when he was running for mayor of South Bend, Indiana.

‘You’re motivated because you believe that at the end of your education, there is a reward; there’s a stable life; there’s a job. And there are a lot of kids—especially [in] the lower-income, minority neighborhoods, who literally just haven’t seen it work,’ he continued. ‘There isn’t someone who they know personally who testifies to the value of education.’

This prompted Harriot to publish a fiery article claiming Buttigieg is a ‘lying motherf****r,’ insisting the reason minority students do worse in school is because low-income community schools aren’t funded as well and black students are disciplined more harshly than white students.

The article will feed concern among Democrats that Buttigieg has a problem connecting to African-American voters. 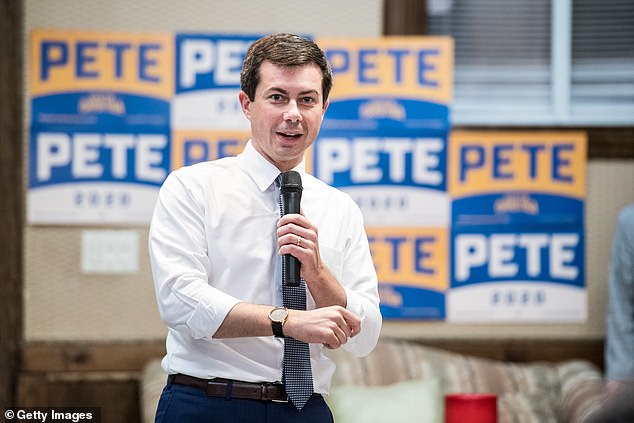 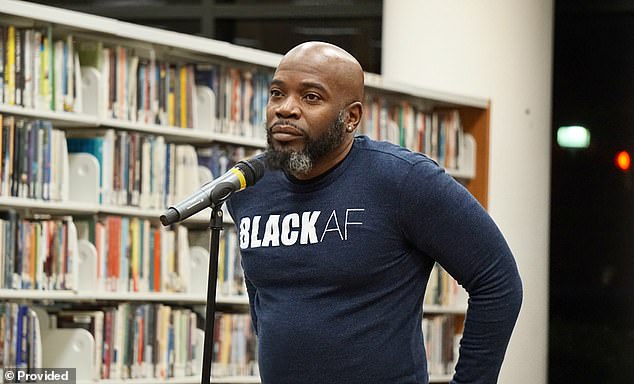 Harriot, a senior writer for The Root, said his goal every day is to ‘F**k with white people,’ but claimed Buttigieg was very receptive of what he had to say in their call 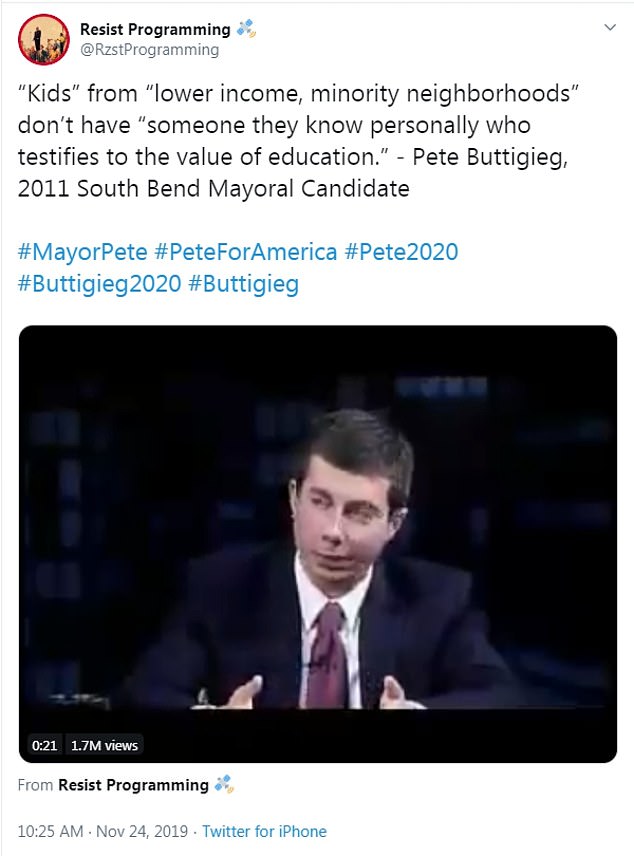 Harriot’s initial piece, calling Buttigieg a liar, stemmed from a 2011 interview that was recently circulated on social media where Buttigieg says poor kids don’t see people in their community that are a testament to why it’s important to get an education

Harriot, who says that he wakes up every morning knowing he wants to ‘f**k with white people,’ said Buttigieg listened a lot in the nearly 19-minute call that came after he published his critical article.

News of the phone call led #PeteButtigiegCalledMe to trend on Twitter, with two different crowds weighing in.

One side shared the hashtag in praise of the openly gay South Bend, Indiana mayor, claiming he ‘called’ them to something greater. The other side shared the trending phrase in continued condemnation of the candidate, especially in regards to his comments regarding the black community.

‘#PeteButtigiegCalledMe and asked where ‘the blacks’ could be found, and if I knew why they didn’t want his help to save them from themselves,’ one Twitter user posted.

But a second said, ‘#PeteButtigiegCalledMe in March and we haven’t stopped talking about belonging. This black female gay immigrant is a proud citizen and I am ready to #WinTheEra #MFPeteSupporter.’

Buttigieg’s call to Harriot came after the writer posted a separate article on Monday to The Root, an African-American-oriented online magazine, claiming the 2020 candidate is a ‘lying motherf****r.’

Harriot’s criticism of Buttigieg came after the spread of a 2011 interview, before he became mayor of South Bend, showed Buttigieg claiming that black kids sometimes don’t do as well in school because they lack a role model.

Harriot said this claim was ‘bullsh**ttery,’ and insisted Buttigieg was aware it was a lie.

He said Buttigieg’s previous comments are proof that ‘men like him are more willing to perpetuate the fantastic narrative of negro neighborhoods needing more role models and briefcase-carriers than make the people in power stare into the sun and see the blinding light of racism.’

Buttigieg, Harriot notes, is also a ‘lucky motherf***er’ when it comes to his background and education.

He attended St. Joseph High School, a private Catholic school located on the campus of Notre Dame, where his father was a professor for nearly three decades. He graduated valedictorian.

‘And if you ask how he got into Harvard or became a Rhodes Scholar, Mayor Pete would probably insist that it had nothing to do with whiteness,’ Harriot wrote. ‘He would likely tell you that he valued education and had great role models, both of which are probably true. There is no question that he is intelligent, hard-working and well-educated.’

In his follow-up piece, following the phone call with Buttigieg, Harriot detailed that the candidate began the conversation, ‘I don’t think I’ve ever been called a ‘lying motherf***er’ before.’

He added that Buttigieg went to Catholic school and was in the Navy, perhaps trying to defend his use of profanity when speaking to the potential next President of the United States. 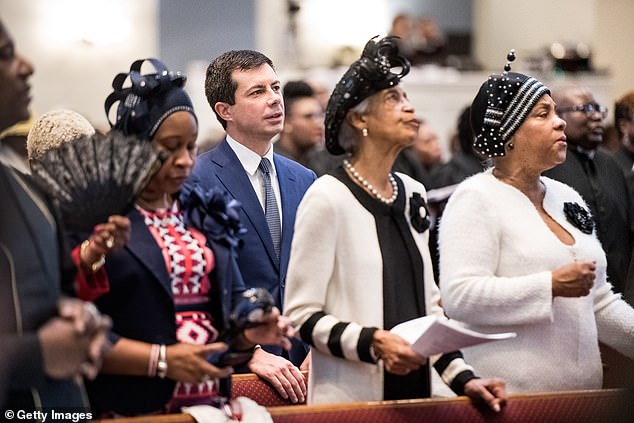 Buttigieg has struggled to gain momentum or support with black voters. Here he is seen attending a church service in South Carolina last month

‘But do you disagree with the point I was making?’ Buttigieg asked, Harriot outlined in his article. ‘Sometimes children don’t get to see the possibilities. Do you think the lack of positive examples of educational success can lead to mistrust and a lack of confidence in the system?’

‘No…well, yes,’ Harriot said he responded. ‘But the lack of confidence doesn’t have anything to do with role models or support from parents, it’s because the s**t is true!’

‘Look, I know I shouldn’t be using obscenities around the maybe-president (Please don’t tell my mother), but he said ‘motherf***er’ first!’ Harriot wrote. ‘Plus, he went to Catholic school and served in the Navy, two of the three cussing-est organizations in the world (Donald Trump’s cabinet remains No. 1). I’m pretty sure you have to say ‘motherf***er’ to pass the Naval officers’ exam.’

This latest run-in is just the latest in Buttigieg’s issues with the black community.

Over the summer, his campaign held a focus group with 24 black Democratic primary voters in South Carolina, and only one of them said they would consider voting for Buttigieg.

The others claim his sexuality – and especially his openness about it – is an issue with them.

This doesn’t bode well for Buttigieg in a state where nearly two-thirds of the Democratic primary electorate are black.

A black voter in his 60s also told DailyMail.com in Atlanta, Georgia last week – the site of the fifth Democrat debates – that he wouldn’t be voting for Buttigieg because the bible tells him it’s wrong from a man to be with another man.

Buttigieg also faced backlash when his campaign posted an image of a black female to its website when promoting his plan to tackle race issues in America. It turns out the stock photo actually featured a woman from Kenya.

The campaign removed the image.

The candidate, however, has soared in some early voting state polls.

He surged to No. 1 in a recent poll in Iowa, the first caucus state, and earned first place earlier this month in a poll in New Hampshire, the first primary state.

In a CNN poll this week he also finally broke double-digits in that particular survey source and earned 11 per cent of the vote out of the 19 candidates in the primary race.