A man believed to the oldest man in the United States has died at the age of 112 in his bed at a Chicago nursing home.

The long-time Chicago resident and White Sox fan, CP Crawford, died in his sleep on Sunday at the Tri-State Village Nursing home in Lasing.

Currently the oldest American is said to be Harlem woman  – who turned 114 in July this year.

His son, Shawn Doston, announced the death of his father ‘one of the greatest men whom God has put on this earth’ on his Facebook page. 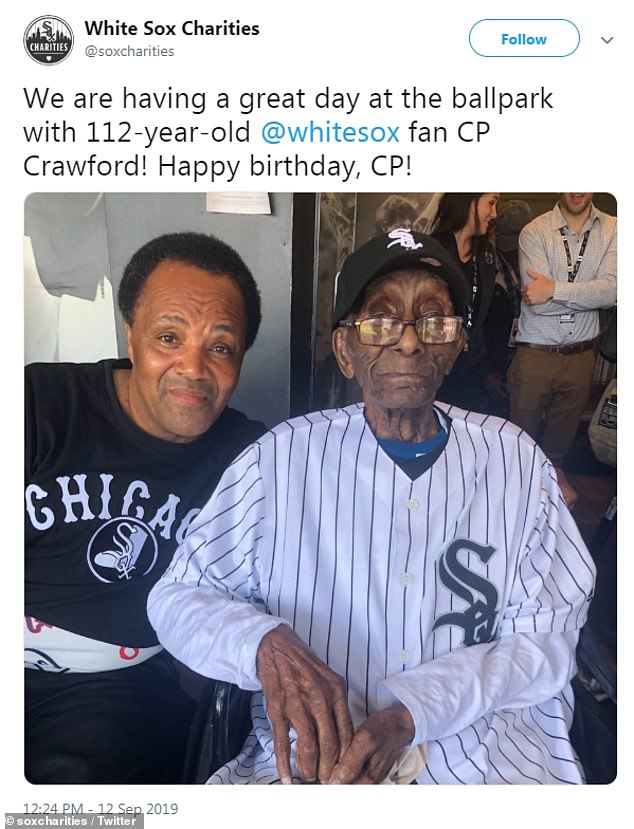 CP Crawford, a long-time baseball fan, only attended his first baseball game at the age of 112 in August this year. He passed away in November 2019 in his sleep at the end of a ‘long and happy’ life

He said his father, who was honored by his favorite baseball team, the Chicago White Sox, on his 112th birthday in August, would be greatly missed. It was the first-time the longtime White Sox fan had attended a live game.

‘He was calm, cool and collected,’ his son said. ‘He was a hard worker and was always very respectful of his family and my mother,’ Dotson told the

‘People would always ask him what the secret was to his longevity, and he would say first put God before anything, eat right and mind your own business,’ Doston said.

Crawford, who was born in Mississippi on August 25 1907, had been living at the Tri-State Village nursing home for the last eight years.

The village’s  activities director, Sheila Huff. told local media  that supercentenarian had been alert and awake till the last fortnight when his health began to decline.

‘It was peaceful,’ said Shelia Huff, activities director at Tri-State. ‘He was sleeping in bed. We’re saddened to see him go, but know he had a long and happy life.’

She said most days the Chicago resident had enjoyed a quiet regular routine. He enjoyed his morning cereal and juice and spent much of the day in his favorite spot in the lobby watching everyone passing by.

‘If his cereal didn’t have enough sugar, he would let you know,’ Ms Huff said. ‘If his food needed more salt, he’d let you know.’

‘Nothing but the rent,’ he always replied.

One staffer would kiss him on the forehead and he’d thank her, saying he was glad to get a kiss from a pretty lady. 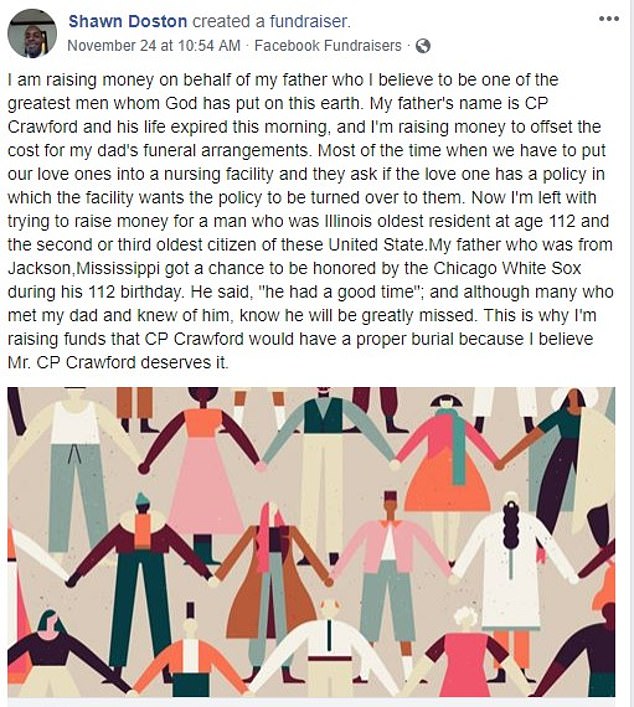 The news of his death comes in the same month as new research has been released giving insight into why some people live to such an older age.

The study of the DNA of ‘supercentenarians’ – those older than 110 – has revealed they have different white blood cells to the rest of us.

Such differences gives these people the ability to remain healthy, protect against infections and tumors, and therefore live exceptionally long lives.

However, CP Crawford, whose long years earned him much attention in the last few years, had his own theory to why he had lived so long.

He was reported as saying that it was all about minding his own business, treating everybody right and eating right.

To celebrate his long life, the last two US presidents sent him letters, congratulating him on reaching a ripe old age.

Thornton Fractional South High School also bestowed an honorary degree on Crawford in 2015, when he was 108 years old.

Crawford, who was the youngest of six children, was especially thrilled to receive the high school diploma because he hadn’t been allowed to attend school when he was younger, Ms Huff said.

Crawford’s mother died when he was a young boy, and he had ended up working in cotton fields before and going to Chicago, where he worked on the Illinois Central Railroad.

‘It meant everything to him. He got to wear a cap and gown, and students were there for the ceremony,’ Ms Huff said. ‘They even gave him a plaque. He was very grateful.’

The nursing home has put up a memorial with the plaque, photos, letters of congratulations from the White House, and other personal items to mark his passing.

Services are expected to take place on Sunday at Gatling’s Chapel in South Holland.