Boris Johnson denied Labour claims that the Tories plan to offer up the NHS to US companies after Brexit today, branding it ‘nonsense’ and an attempt to deflect attention from Jeremy Corbyn’s own problems.

The Prime Minister lashed out after Mr Corbyn staged a stunt claiming to reveal sensitive documents about US-UK trade talks, after he was left reeling by Britain’s chief rabbi saying he is not fit to become PM.

The Labour leader said the leaked 450-page trade document showed the NHS could be undermined in talks with the US over a post-Brexit trade deal.

But the documents are from more than a year ago – well before Boris Johnson was PM, and only includes officials rather than ministers.

‘This is brought up time and again by the Labour Party as a distraction from problems that they are having.

‘I can give you an absolute cast-iron guarantee that this is a complete diversion, that the NHS under no circumstances will be on the table for negotiation, for sale.’

It came after he was taken to task by nurses today over his plan to recruit 50,000 new medics to ease the staffing crisis, with one asking him if he had a magic ‘nurses tree’. 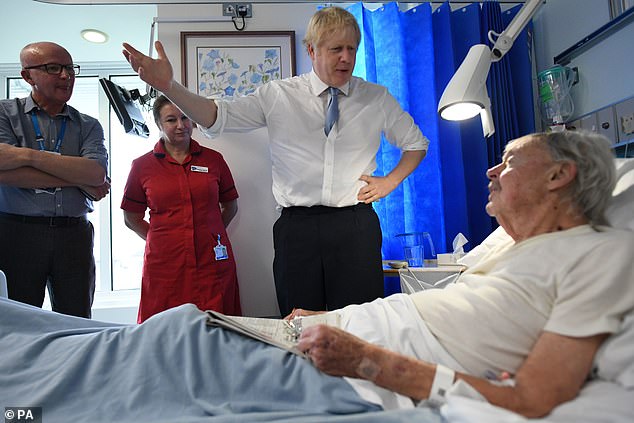 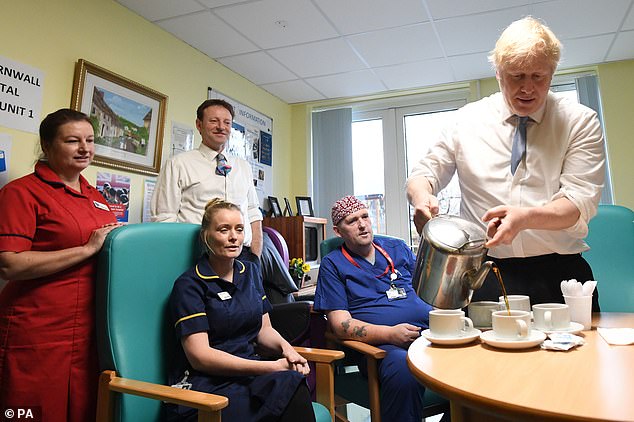 He toured the wards in the West Cornwall Hospital in Penzance  but was challenged on his General Election campaign pledges as he drank tea with staff.

One student nurse told the PM how she was ‘struggling’ financially because of tuition fees and asked him about his plans to bring back the nursing bursary.

Another asked him about his commitment to deliver 50,000 new nurses, saying: ‘Where are these people going to come from?’

The policy reads: ‘We will deliver 50,000 more nurses, with students receiving a £5,000-£8,000 annual maintenance grant every year during their course.’

However, 18,500 of these are current nurses who the Conservatives will try to dissuade from leaving the profession.

Better retention rates would mean that there could be more nurses than there otherwise would be if they dropped out, but they are not new posts. 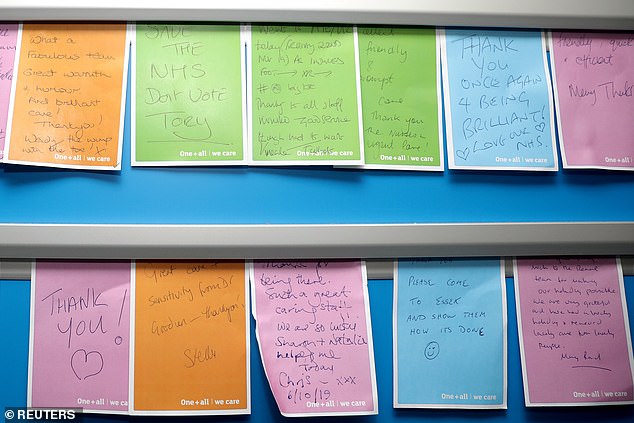 Notes from patients, including one saying ‘Save the NHS, don’t vote Tory’ on a noticeboard at West Cornwall Community hospital during the PM’s visit

Only 14,500 nurses will be trained from scratch as undergraduates, while 12,000 are understood to be recruited from overseas.

5,000 would be recruited as apprentices.

A costings document revealed £759million will be invested into ‘nurse recruitment, training and retention’, jumping to £879million by 2023-24.

Under questioning Mr Johnson said the Tories were ‘definitely bringing back the bursary’.

And on the source of the new nurses he said: ‘I think we should have a programme of making sure that people who have grown up in this country have a career in nursing … we’ve also got to make sure that we are open to people from around the world, and we can do that and we’re going to have an immigration system that is points-based.’ 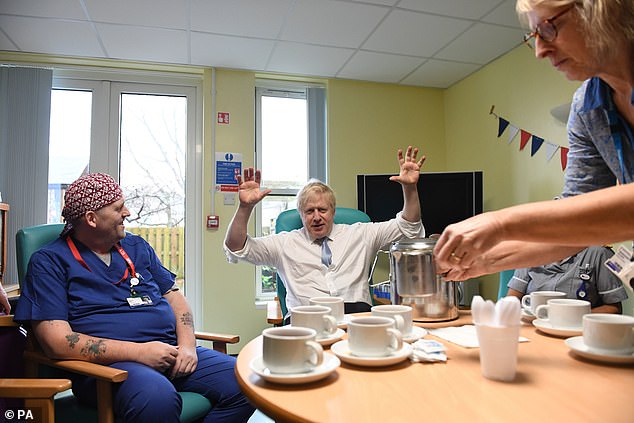 Earlier on his tour of the ward, Mr Johnson told staff that his father Stanley was born in Penzance, but when asked where, he replied: ‘I presume he was born in a hospital … I’ll have to find out.’

One patient, Andrew Hall, urged the Prime Minister: ‘Get us out of Europe and watch out for John McDonnell … he’s a sneaky one.’

He later discussed Brexit and travel times to hospitals in Cornwall with another patient receiving dialysis.

Derek Thomas held St Ives for the Tories at the 2017 election but he is defending a majority of just 312 this time around.

Heidi Klum, 45, kicks up her high heels while cheering up the kids at Children's Hospital LA
CHRISTOPHER STEVENS on last night’s passionate TV biopic of Torvill and Dean
Breakthrough pill that expands in patients’ stomach DOUBLES the chance of losing weight
Fungus which collects particles of GOLD is discovered in Western Australia
'Drunk' flight attendant 'passed out in her seat and slurred through the safety announcement'
Face of the oldest direct human ancestor revealed
Jacinda Ardern declares victory over coronavirus and could lift strict lockdown measures
SpaceX's astronaut-riding Dragon arrives at space station