Ayda Field and Robbie Williams were leading the celebrity arrivals at the Royal Variety Performance on Monday night.

The 40-year-old TV personality looked lovely in a lilac suit as she arrived  at the  Palladium for the prestigious annual show, where her husband was performing.

The pair had the opportunity to meet the Duke and Duchess of Cambridge following the main event, which is in aid of the Royal Variety Charity, formally known as The Entertainment Artistes’ Benevolent Fund, of which The Queen is Patron. 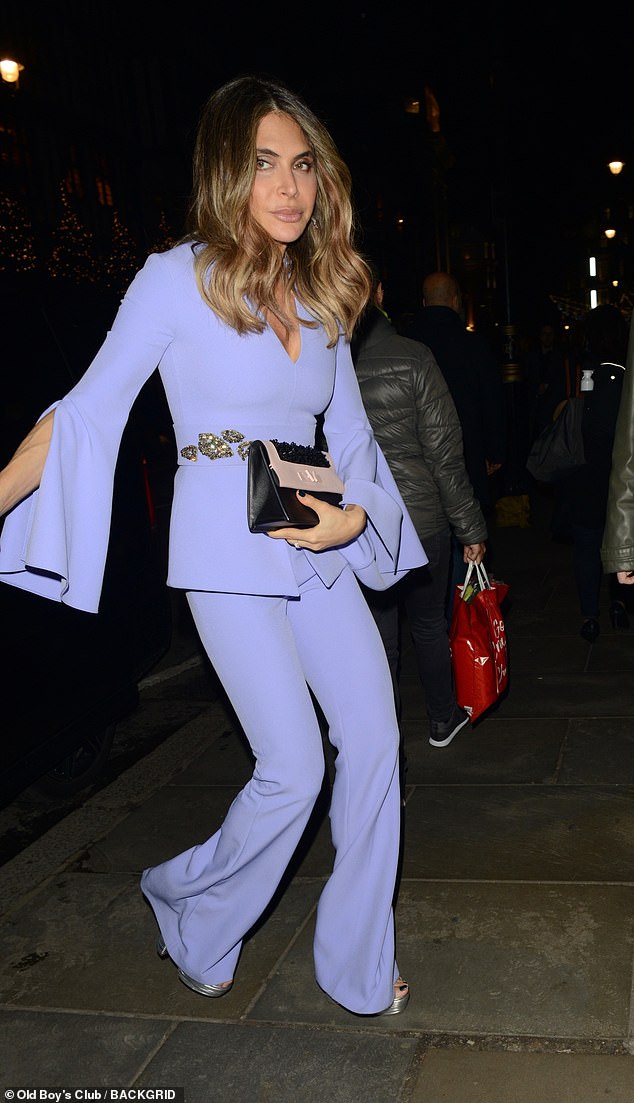 Star-studded: Ayda Field and Robbie Williams were leading the celebrity arrivals at the Royal Variety Performance on Monday night 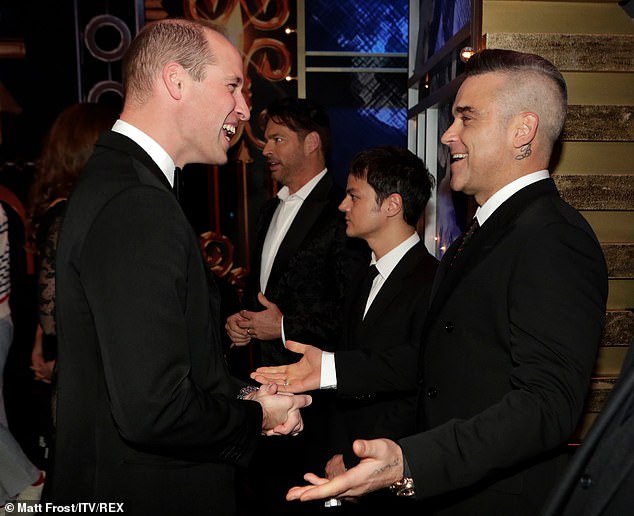 When Robbie met Prince William: The pair had the opportunity to meet the Duke and Duchess of Cambridge following the main event, which is in aid of the Royal Variety Charity

The spectacular show takes place every year, either in London or in a theatre around the United Kingdom, and it’s the third time Kate Middleton and William, both 37, have attended, following their 2014 and 2017 appearances.

The money raised from the show helps hundreds of entertainers throughout the UK, who need help and assistance as a result of old age, ill-health, or hard times.

The Duke and Duchess of Cambridge got to meet some of the cast of the new well-received Mary Poppins musical – Petula Clark CBE, Zizi Strallen and Charlie Stemp, who play the Bird Lady, Mary Poppins and Bert respectively.

The performance is hosted by comedians Rob Beckett and Romesh Ranganathan, and includes the cast of Mary Poppins, Lewis Capaldi, Mabel, the cast of Come From Away, and a special collaboration by Emeli Sandé and Manchester’s Bee Vocal choir. 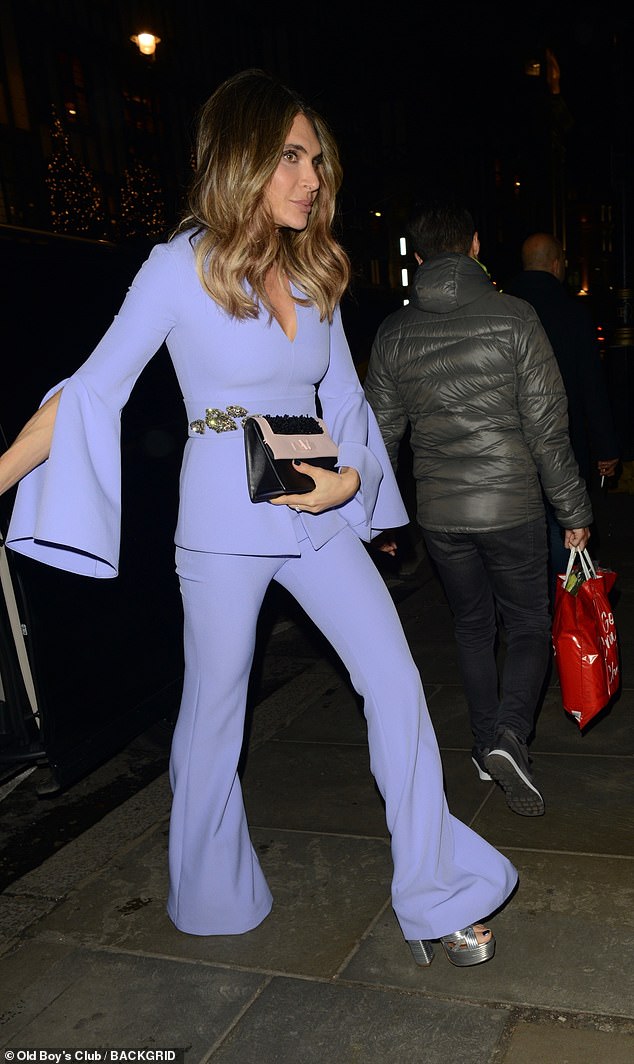 Suits her! Ayda looked lovely in a pair of lilac flares and matching top with caped sleeve detailing and silver embellishment at the waist 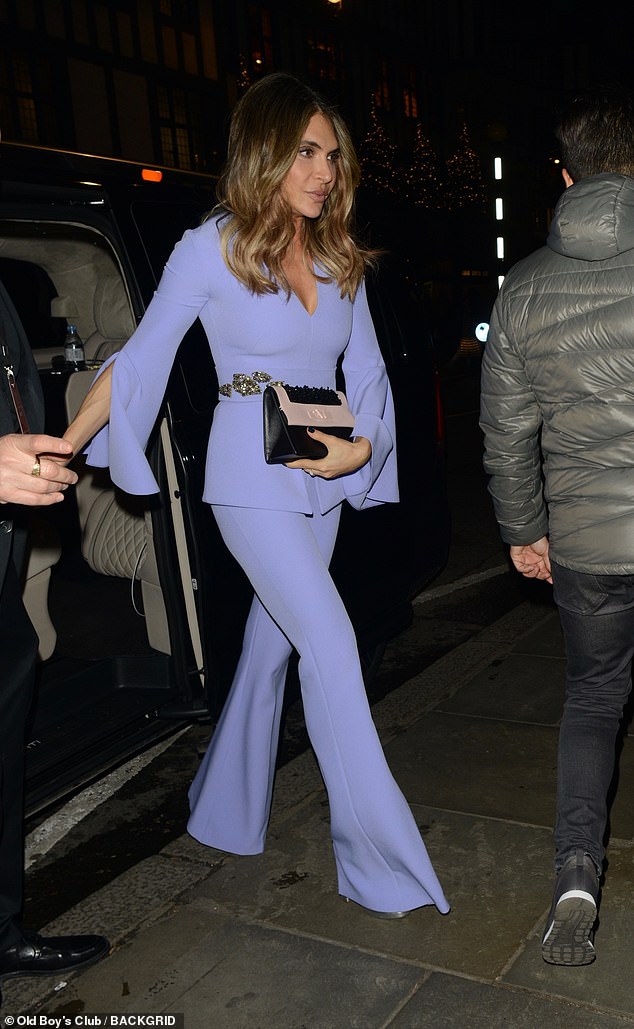 Stylish: She carried her belongings in a cute black and nude clutch bag and slipped her feet into silver platform boots

Look lovely in lilac like Ayda wearing a Safiyaa co-ord

It’s not just the Duchess of Cambridge who brought a glamorous touch to the Royal Variety Performance this week, so too did Ayda Field.

The presenter went for a colourful look for the event with the help of her stylist, Karl Willett, who dressed her in a lilac peplum top and wide-leg trousers, both by Safiyaa. Alongside her metallic platform sandals her William & Son jewellery and bag complete the look.

Designed from a bold lilac crepe, the V-neck top comes with the designer’s signature tailored silhouette that’s embellished at the waist and complements the trousers to create a sophisticated yet retro aesthetic.

Ayda’s top is from the Resort ’20 collection, but Fashion Finder HQ have spied a similar version at NET-A-PORTER which you can click (right) to buy. And don’t forget to snap up the matching ‘Halluana’ trousers too.

Alternatively, get her A-list look for your own event by shopping look-alike jumpsuits below. And whilst there why not splash out on her bag!

Ayda dressed to impress for the occasion, sporting vibrant flares and a matching top with caped sleeve detailing and silver embellishment at the waist.

She carried her belongings in a cute black and nude clutch bag and slipped her feet into silver platform boots.

The bubbly star styled her brunette locks in perfect waves and accentuated her pout with a slick of nude lipstick. 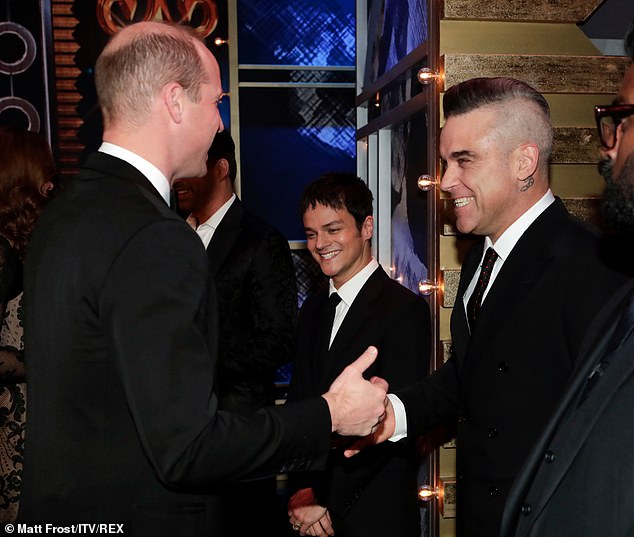 Nice to meet you! Robbie couldn’t contain his glee as he shook hands with Prince William 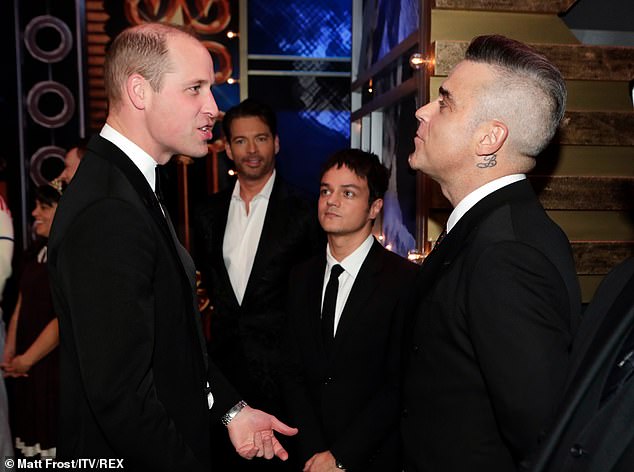 Special moment: The former Take That singer appeared to be enjoying their conversation 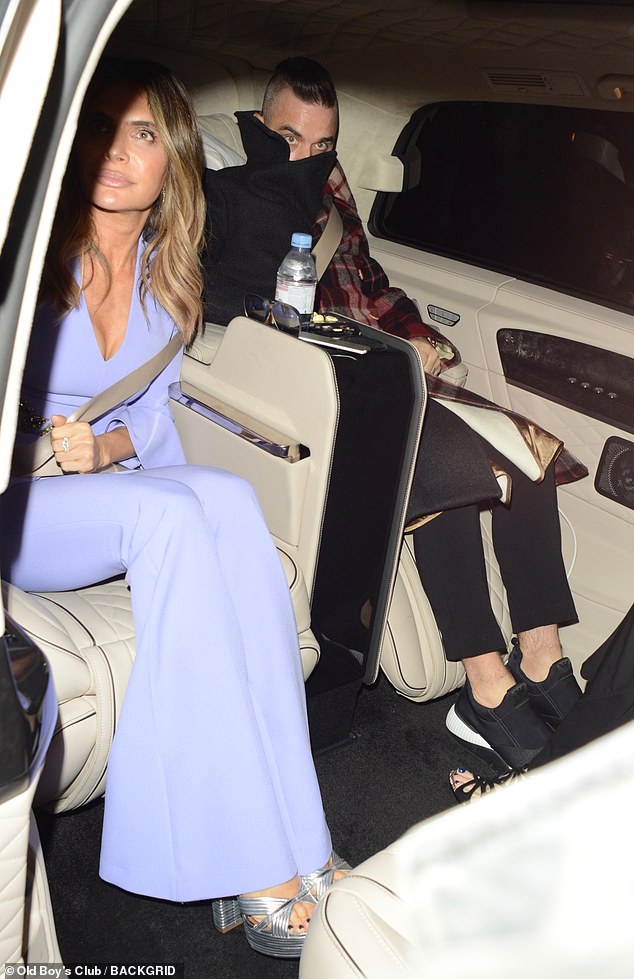 Heading off home: Ayda and Robbie sped off in a taxi together after the main event 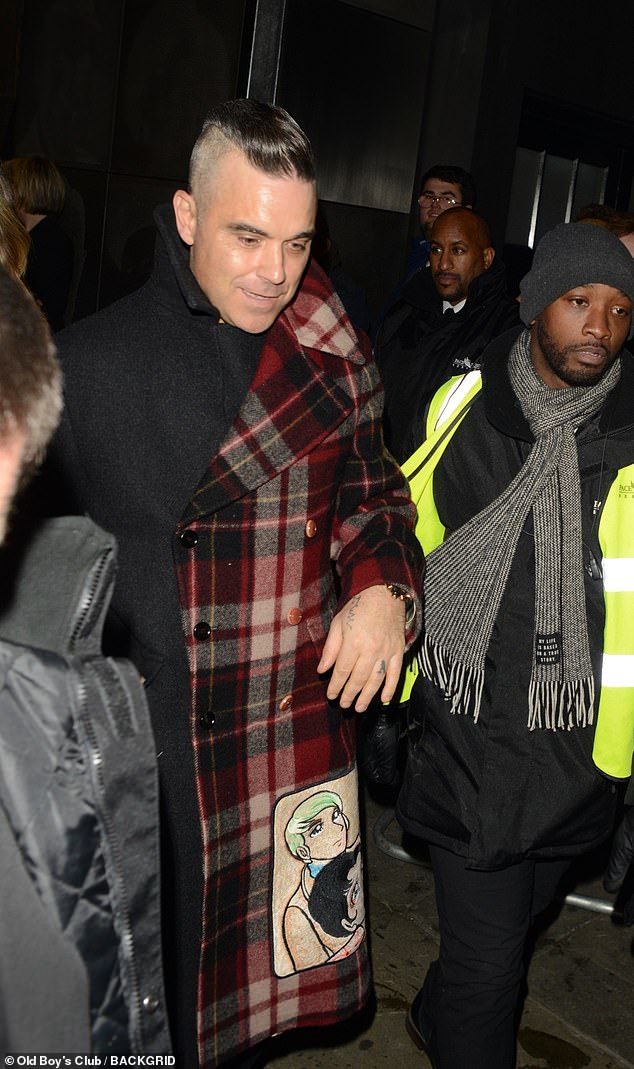 Wrapping up warm: Robbie donned a quirky tartan coat for his journey home

Ayda previously revealed she would like ‘one more’ baby as a ‘teammate’ for her youngest child.

The actress  has daughter Teddy, seven, son Charlie, five, and baby girl Coco, 14 months, with husband Robbie  and said motherhood is by far her ‘greatest pleasure’ in life.

Speaking during her return to the Loose Women panel earlier this month, Ayda joked that while she would like to expand her family further, Robbie would ‘commit her and run away with Gary Barlow into the sunset’ if they have more than four children.

Asked if she’s planning another baby, she said: ‘I’d like to, [but] you never know whats going to happen in the world, will it work, will it not, where we are in our life. 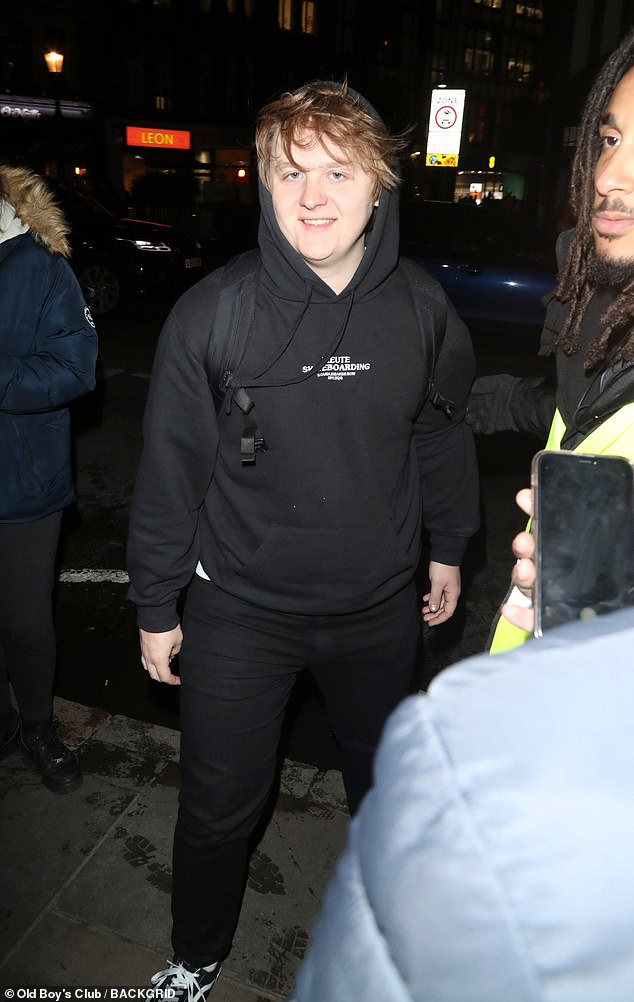 Putting in an appearance: Lewis Capaldi is set to perform at the star-studded event 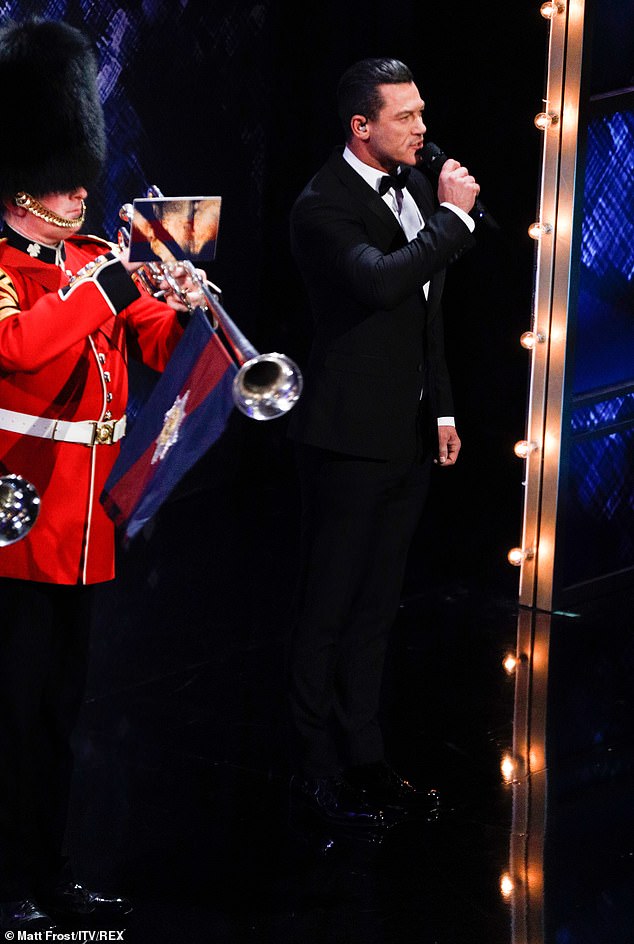 A-list appearance: Luke Evans was introducing the acts during the Royal Variety Performance 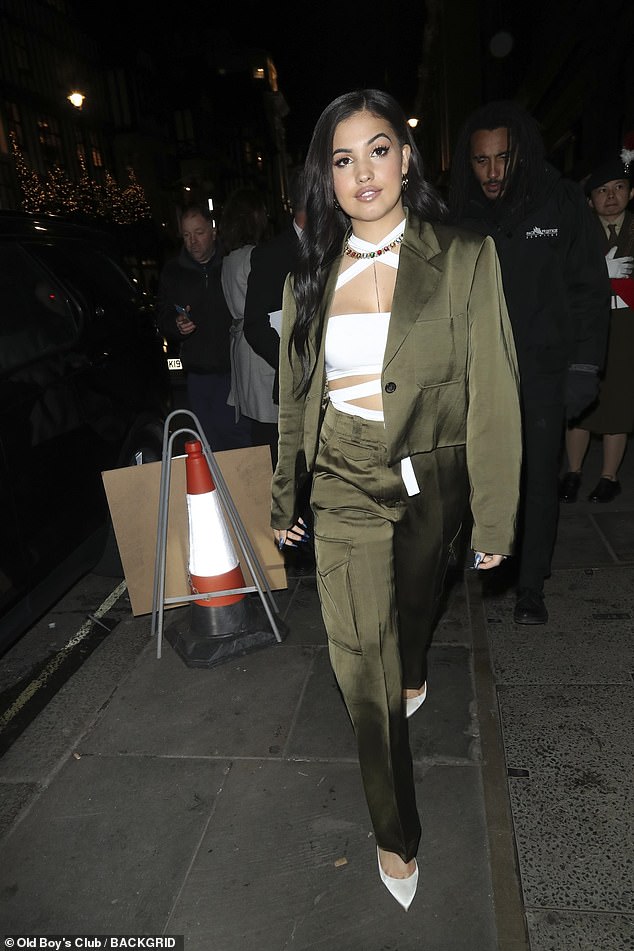 ‘I’d like one more, but after that I think Rob would commit me somewhere and run away with Gary Barlow into the sunset. Being a mum is my greatest pleasure.’

Ayda said it would be good for Coco – who was born via a surrogate – to have a ‘teammate’ close in age because her siblings are so much older.

She explained: ‘The difference is because Teddy and Charlie were so close in age, they didn’t dote on each other, they were more jealous

‘Whereas with Coco they want to feed her and play with her and show her things, she’s a living doll for them.

‘Sometimes I have to remind them she’s my child and I’m in charge, but they’re the best siblings. I think Coco will want a teammate to rally against her brother and sister, but they’re such an amazing unit.’ 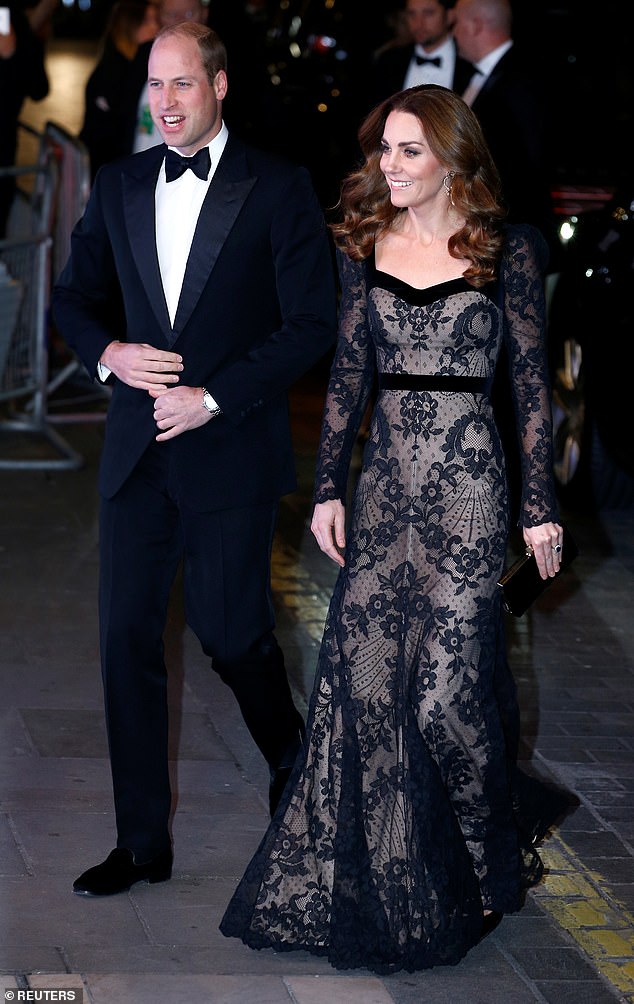 Royal guests: The Duke and Duchess put on an elegant display as they arrived at the Royal Variety Performance earlier in the evening 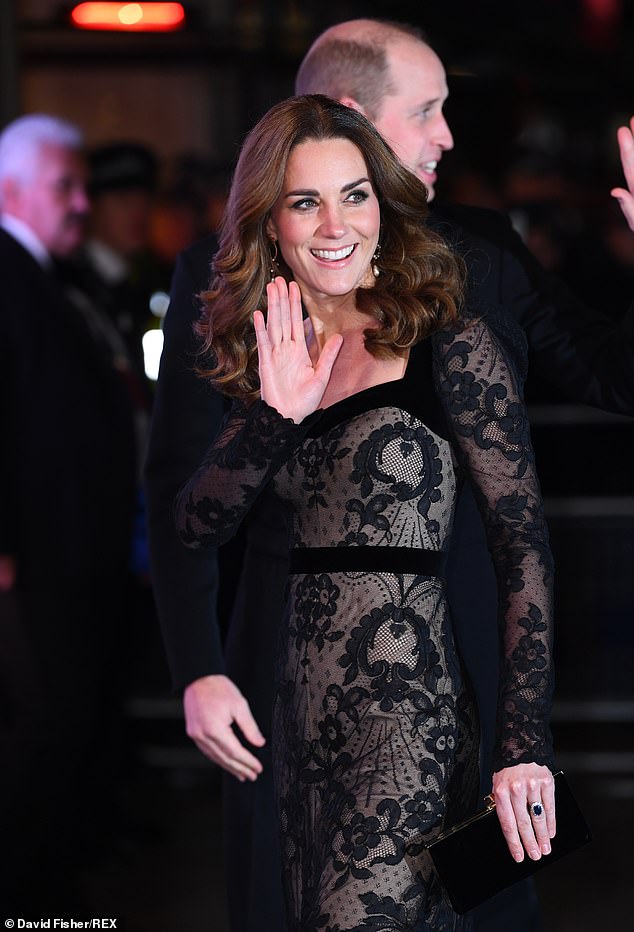