She looked positively radiant when she was spotted out on Saturday.

The happy couple strolled together in the sunshine after leaving the restaurant grinning ear to ear. 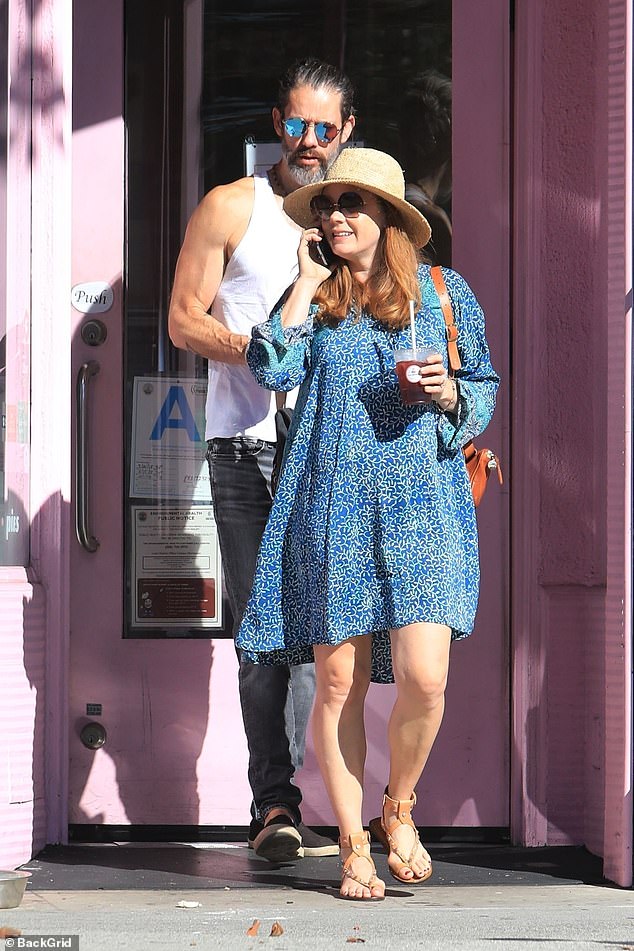 Glued to her phone: Amy Adams wore a flowing blue frock with a busy white pattern when she and husband Darren Le Gallo enjoyed lunch in Beverly Hills on Saturday

The 45-year-old star looked chic in a flowing blue frock with a busy white pattern that fell to just above her knees. Amy covered her flaming red hair with a straw hat and protected her eyes with sunglasses.

Darren, also 45, looked extremely laid back on the hot day in a white vest, black jeans and sneakers. He pulled his long greying hair up into a man bun and his beard and mustache were neatly trimmed.

Darren and the Enchanted star share nine-year-old daughter Aviana, who was not around on Saturday.

Amy, six-time Oscar nominee, recently revealed to Allure that she and Darren tied the knot in May 2015 because Aviana ‘wanted a family wedding.’ 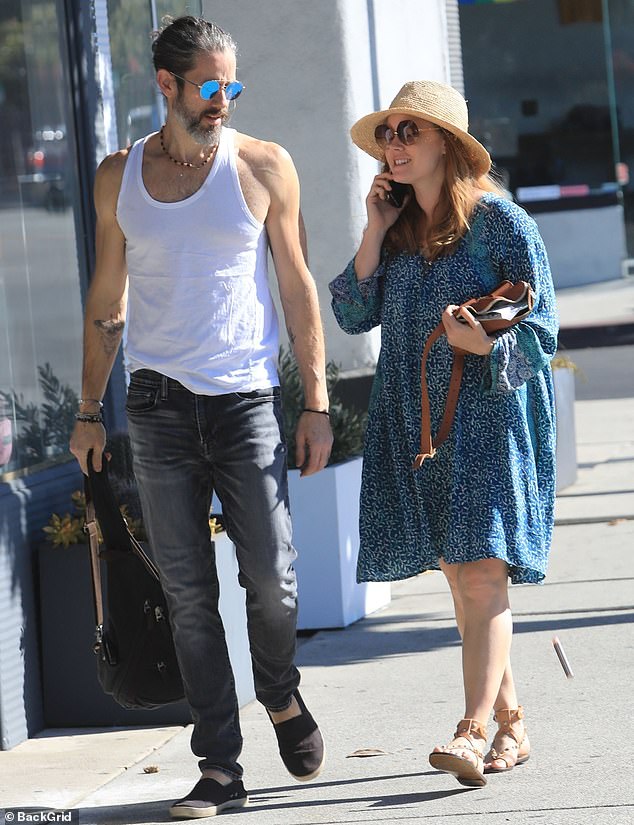 Comfy couple: The star, 45,  covered her flaming red hair with a straw hat and protected her eyes with sunglasses while Darren donned a white vest and black jeans 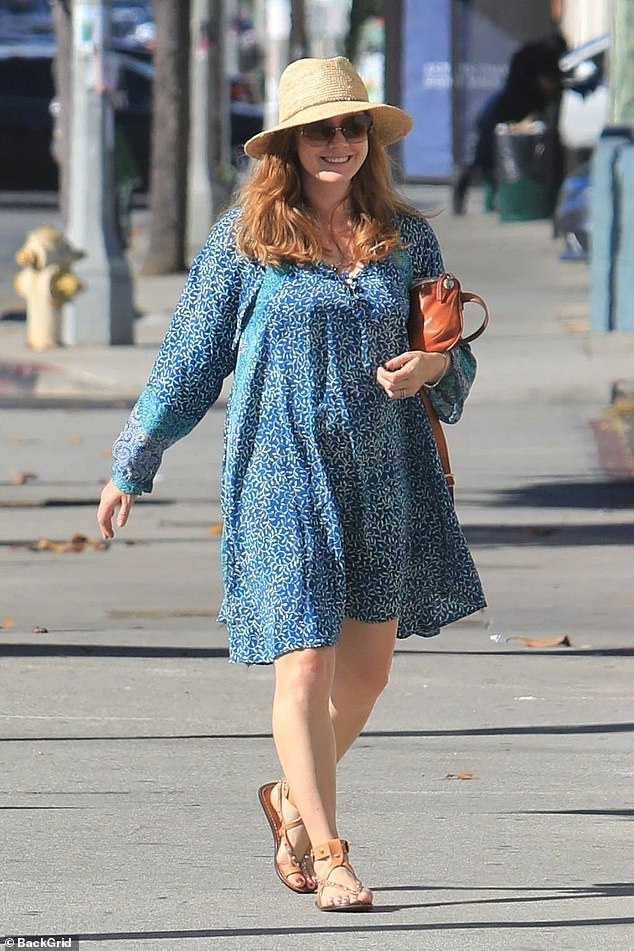 So that’s why they did it: The star admitted that she and Darren finally got married in 2015 because their daughter Aviana, now nine, wanted a family wedding’

Their nuptials came after they met in an acting class in 2001 and got engaged in 2008.

The five-time Oscar-nominated actress confided in E! News that ‘I avoided getting married for a really long time because I don’t like people looking at me.’ 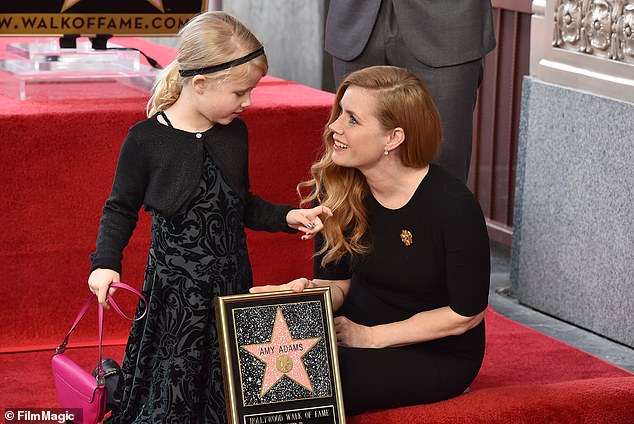 Helping out: Aviana joined her mom on the red carpet when Amy got a star on the Hollywood Walk of Fame on January 11, 2017

Meanwhile, Amy will be back on the big screen in two movies next year – crime mystery The Woman In The Window, due out on May 15, and the drama Hillbilly Elegy, which has yet to set a release date.

She has also signed on to lend her voice to Giselle in the animated movie Disenchanted, which follows on from her 2007 live action movie Enchanted .

She will be joined by Patrick Dempsey and James Marsden reprising their roles as lawyer Robert Philip and Prince Edward. 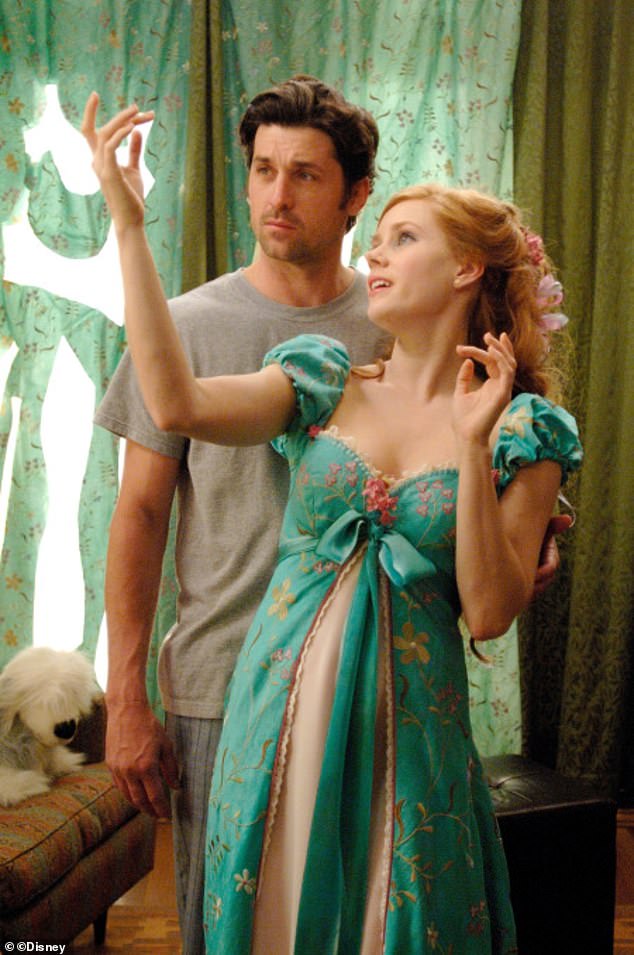 They’ll be back: Patrick Dempsey’s lawyer Robert fell for Amy Adams’ Giselle in Enchanted in 2007. Now Disney is planning an animated version using the voices of the original cast

Wish you were here? Kelly Gale flaunts her toned abs on Bali getaway
Winnie Harlow overdoes it with the bubblegum pink as she attends Coachella
Margot Robbie jokes with Leonardo DiCaprio and Brad Pitt at Once Upon A Time In Hollywood photocall
Chris Hemsworth announces he's quitting Hollywood to spend time with his wife and their children
Niall Horan is left in stitches on The Project over a VERY cheeky comment about his hip thrusts
I'm A Celebrity SPOILER: Andrew Whyment leaves Ant and Dec in hysterics during Pump of Peril trial
Christina Milian wraps up warm in a teddy bear hoodie for Paris outing with a newborn son Isaiah
Hayley Hasselhoff demands attention in bold red trousers as she buys flowers in London