Attorney General William Barr accused Democrats of ‘waging a scorched-earth, no-holds-barred war of resistance’ to designed to ‘sabotage the functioning of the executive branch.’

The nation’s top prosecutor made the remarks in a speech to conservative lawyers who gathered in Washington, DC, on Friday for a conference.

‘In waging a scorched-earth, no-holds-barred war of resistance against this administration, it is the left that is engaged in a systematic shredding of norms and undermining the rule of law,’ Barr told guests of the Federalist Society convention in the capital.

Barr, who was named Attorney General by Trump after the resignation of Jeff Sessions last year, accused the ‘resistance’ of ‘dangerous’ and ‘incendiary’ language by questioning the legitimacy of the sitting government. 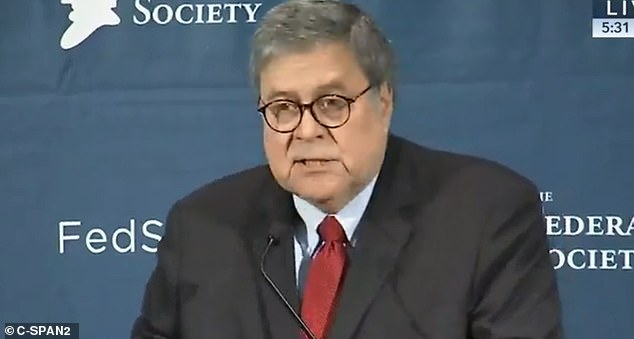 Attorney General William Barr gave a speech to conservative lawyers in Washington, DC, on Friday in which he accused Democrats of being ‘engaged in a systematic shredding of norms and undermining the rule of law’

‘This is a very dangerous and indeed incendiary notion to import into the politics of a democratic republic,’ Barr said.

Barr said the legislative and judicial branches were in the midst of a yearslong campaign to chip away at the powers of the executive branch.

‘I deeply admire the American presidency as a political and constitutional institution,’ Barr said.

‘Unfortunately over the past several decades, we have seen a steady encroachment on executive authority by the other branches of the government.’

Barr lamented the ‘avalanche of subpoenas’ as well as Democratic efforts to derail appointments by the Trump administration.

These tactics, according to Barr, have had the effect of ‘incapacitating’ the executive branch.

‘Immediately after President Trump won the election, opponents inaugurated what they called the “resistance” and they rallied around an explicit strategy of using every tool and maneuver to sabotage the functioning of the executive branch and his administration,’ the Attorney General said. 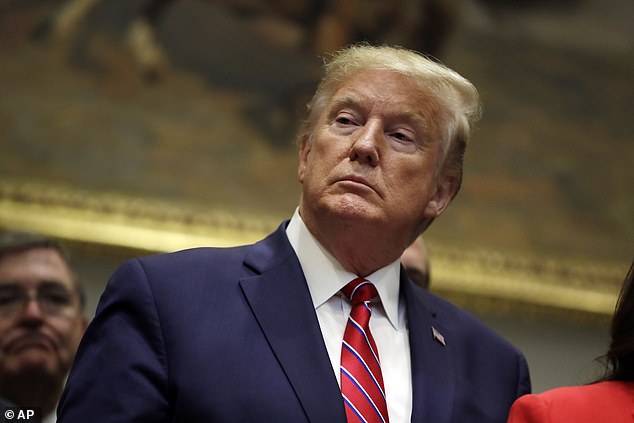 ‘The cost of this constant harassment is real,’ he continued.

He said they ‘essentially see themselves engaged in a war to cripple by any means necessary.’

Barr said that the use of the term ‘resistance’ to describe opposition to Trump is problematic since it implies that the administration seized power by undemocratic means.

‘Now resistance is the language used to describe insurgency against rule imposed by an occupying military power,’ Barr said.

‘It obviously connotes that the government is not legitimate.’

Barr’s remarks came on the same day that his Justice Department secured a conviction against a former Trump associate, Roger Stone.

A federal jury convicted Stone of tampering with a witness and lying to Congress about his attempts to learn of hacked Democratic emails during the 2016 presidential election. 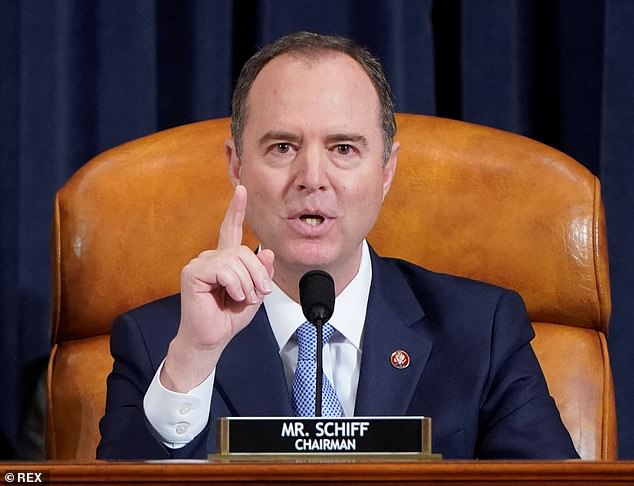 Democrats in the House of Representatives launched an impeachment inquiry against President Trump over his dealings with Ukraine. House Rep Adam Schiff, who chairs the House Intelligence Committee, is seen above during hearings on Capitol Hill on Friday

He’s scheduled to be sentenced on Feb. 6 and could face up to 20 years behind bars.

The President is also facing the growing specter of impeachment as the Democrat-run House of Representatives continues its investigation into contacts with Ukraine.

The investigation centers on whether Trump’s push for Ukrainian officials to investigate his political rivals amounted to an abuse of power, a charge he and Republicans vigorously deny.

In chilling detail, ousted US Ambassador to Ukraine Marie Yovanovitch described to Trump impeachment investigators on Friday how she felt threatened upon learning that Trump had promised Ukraine’s leader she was ‘going to go through some things.’

Trump was unwilling to stay silent during Yovanovitch’s testimony, focusing even greater national attention on the House hearing by becoming a participant.

He tweeted fresh criticism of her, saying that things ‘turned bad’ everywhere she served before he fired her – a comment that quickly was displayed on a video screen in the hearing room.

Uber drivers come clear on essentially the most outrageous acts which have gone on behind their cabs...
Trump calls Confederate icon Robert E Lee a 'great general' in bizarre history lesson at Ohio rally
Eight neo-Nazis arrested for beating of black DJ at Seattle bar
Cop, 22, shot and killed by suspect just a few weeks after completing her training
Desperate search for Marine who went missing in bad weather during a backcountry ski trip
Documents keep up pressure on Justin Trudeau over SNC-Lavalin scandal
Technical 'glitch' causes Spirit Airlines customers to miss their flights
SECOND case of coronavirus is confirmed in Canada after Arizona patient becomes fifth in US