The late father of a 16-year-old boy who gunned down his classmates at a high school was a hunter who owned several weapons and was once arrested on suspicion of abusing his wife.

Nathaniel Berhow was identified as the suspect after the deadly shooting at Saugus High School in Santa Clarita, about 40 miles from Los Angeles, on Thursday morning.

Authorities say he killed two students and injured another three before shooting himself in the head. He survived and is currently in hospital in a grave condition.

As authorities continue to investigate and try to determine a motive, details about the suspect and his family have started to emerge – including how there were signs of trouble at home.

Berhow’s father, Mark Berhow, died of a heart attack in December 2017, according to his online obituary. 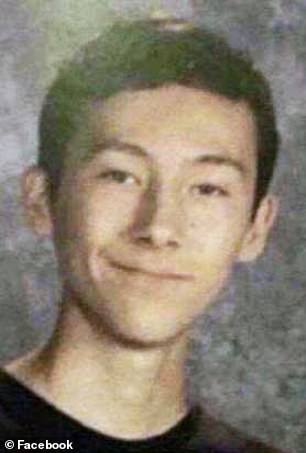 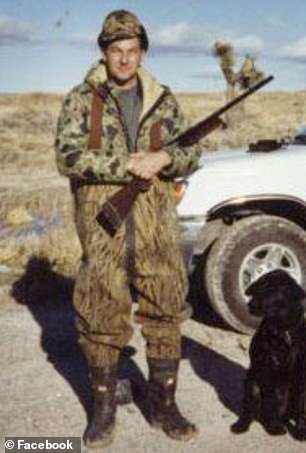 Mark Berhow, the late father of 16-year-old Nathaniel Berhow, who gunned down his classmates at a California high school on Thursday, was a hunter who owned several weapons and was once arrested on suspicion of abusing his wife 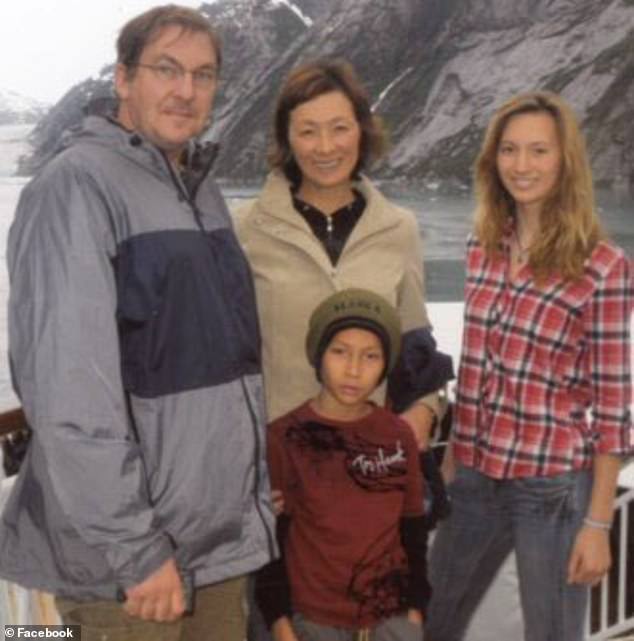 As authorities continue to investigate and try to determine a motive, details about the suspect and his family have started to emerge. Berhow is pictured as a child with his father Mark, mother Mami and his sister

The elder Berhow, who worked as an engineer for a health care company, was an avid hunter and is believed to have owned multiple weapons.

His obituary described his love of ‘big game hunting and fishing of all kinds’.

According to Los Angeles County Sheriff’s Department records published in a local newspaper, Berhow’s father was arrested in June 2015 on suspicion of attempted battery on his wife Mami Matasuura.

The district attorney’s office declined to file charges at the time because of insufficient evidence.

Online records also showed that Berhow’s mother and brought divorce proceedings against her husband in August 2016 and was filing for custody of the children.

Authorities were questioning the teen’s mother on Thursday as they searched for an explanation for the shooting.

A childhood friend of Berhow’s speculated in a interview that the death of the teen’s father two years ago could have triggered the rampage.

The friend claimed that Berhow’s father drank heavily and also made his own bullets.

Asked if there were weapons in Berhow’s home, the friend said: ‘His dad used to make bullets, so I’d assume he had bullets and stuff like that.’

Neighbors claimed Berhow’s father had a passion for guns but it is not clear if the teenager had access to weapons. 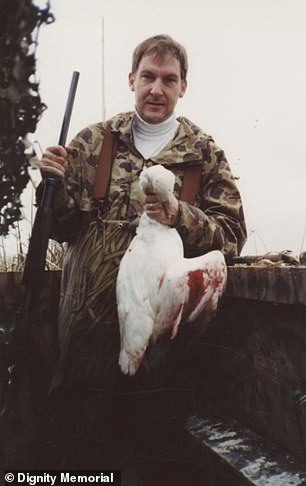 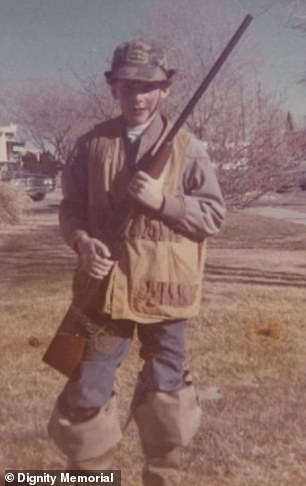 Berhow’s father, Mark Berhow, died of a heart attack in December 2017, according to his online obituary. The obit included several photos of him hunting as an adult and teenager 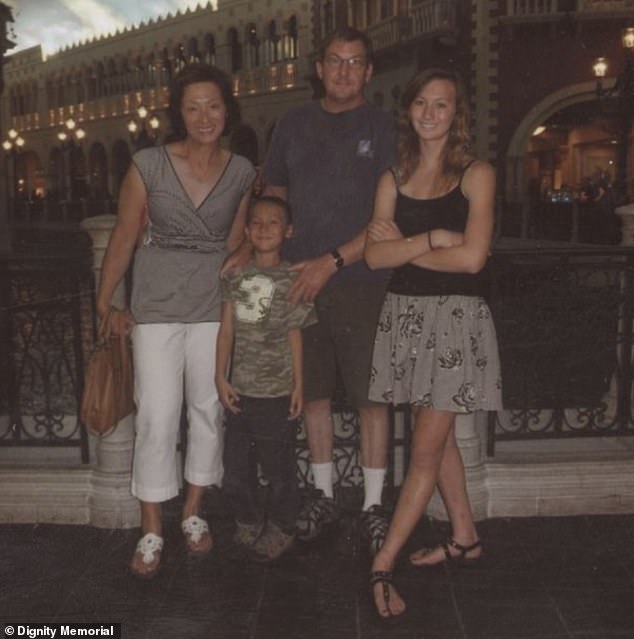 According to Los Angeles County Sheriff’s Department records published in a local newspaper, Berhow’s father was arrested in June 2015 on suspicion of attempted battery on his wife Mami. They are pictured together as a family in an undated photo

Jared Axen, who lives next door to the family, said Berhow used to go hunting with his father and that firearms ‘weren’t a mystery to him’.

‘He grew up with his father who was a hunter, and this was a normal activity for him,’ Axen said.

‘He grew up around firearms, it wasn’t a mystery, he knew how to use it and understood how it worked, he was responsible. He came off as a very responsible person.’

It comes as people who knew the suspect described him as a quiet, smart kid who they’d never expect would violently snap.

One fellow junior at Saugus High School said he was a Boy Scout who she relied on to study for advanced placement European history.

A next-door neighbor who knew the boy as they grew up said he kept to himself but was never threatening.

‘A quiet, to-himself kid,’ said Ryan McCracken, a next-door neighbor who though several years older would play with the boy growing up, including in a backyard tree house. 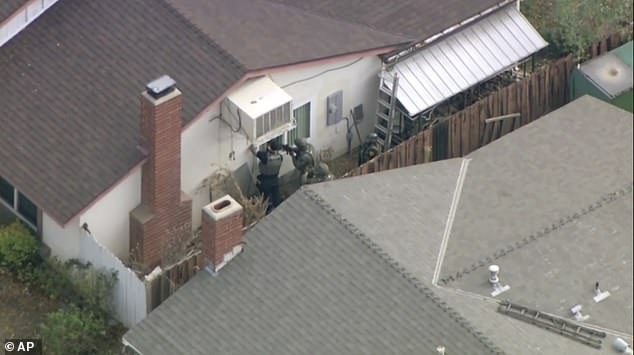 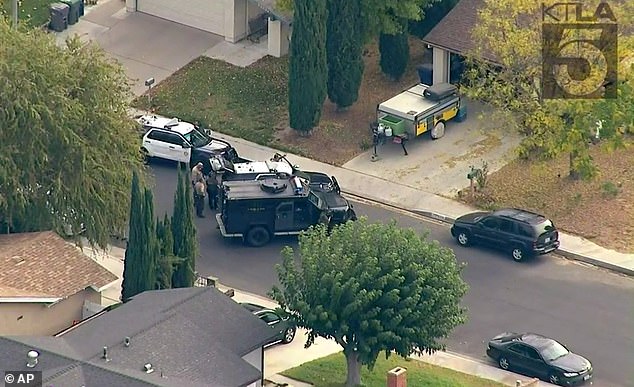 Brooke Risley, a junior at Saugus High, said she had known the boy since elementary school and saw him Wednesday in engineering class. They were paired on engineering projects during the last school year and he came to her house to work on them.

On Thursday, she couldn’t recall anything indicating he might be violent. The closest she could get was a keychain he had with a hollow bullet.

‘We’re all wondering,’ said Risley, ‘what was the motive?’

Risley described the boy as somewhat introverted, though open with his close friends, and ‘naturally smart’.

She said he wasn’t bullied, had a girlfriend and had been an active member of a local Boy Scout troop.

Results posted online from school track meets last spring show he was an unexceptional middle- and long-distance runner. His GPA landed him on the honor roll during fall of eight grade, according to online school records, though he did not appear on the published honor roll last year.

Joe Fitzpatrick, a senior who helped the teacher in the boy´s physics class, called him a ‘good, quiet kid’ who didn’t miss assignments and did well on tests.

‘He just seemed like one of those regular kids,’ Fitzpatrick said. 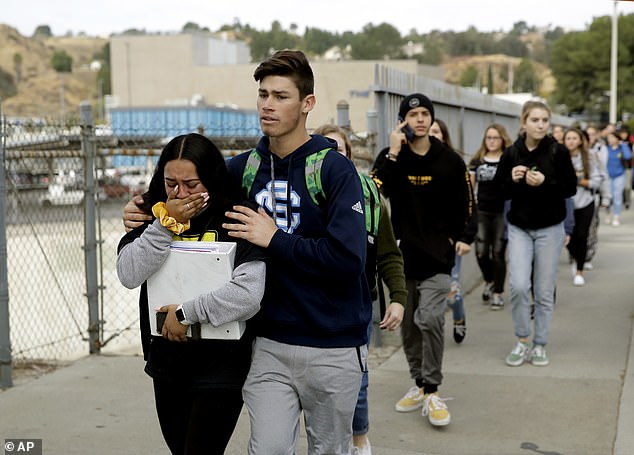 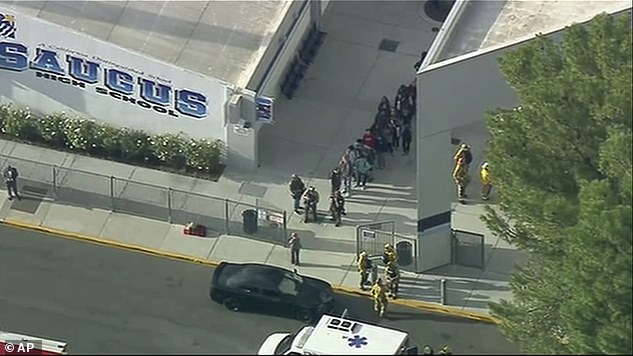 People are lead out of Saugus High School on Thursday after the suspect opened fire, killing two students and injuring three others 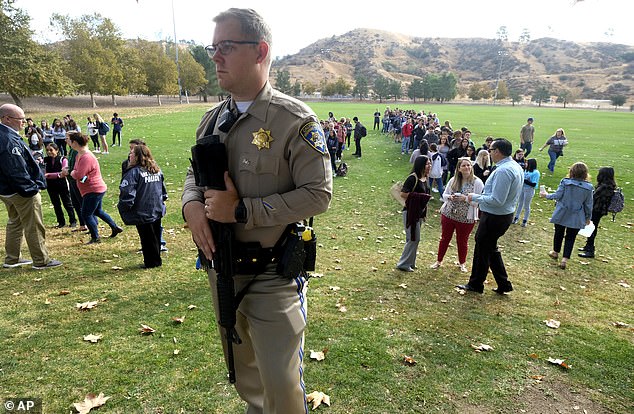