People in Liverpool were left baffled after what appeared to be a crocodile was found close to a hospital.

One woman, who spotted the reptile as she was leaving work on Wednesday evening, believed the animal was a branch and then a stuffed toy.

Pictures and video circulating on social media show the animal in the Lower Lane area of Fazakerley, close to the hospital and the Walton Centre.

Images appear to show parts of the beast stuffed with straw, leading some to speculate that it could have been stuffed by a taxidermist. 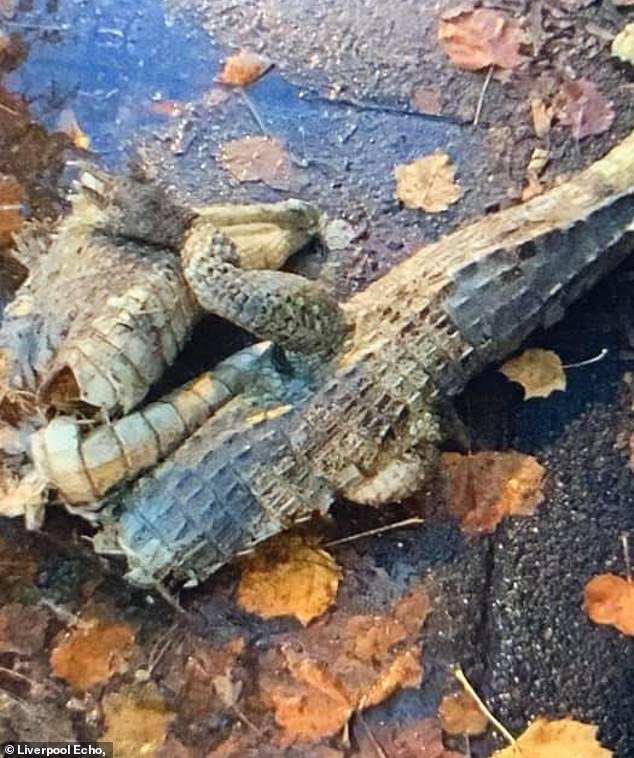 People in Liverpool have been baffled by this bizarre photograph of a crocodile which was found dumped on a city street close to a nearby hospital. According to reports on social media, the crocodile had been seen intact earlier in the day 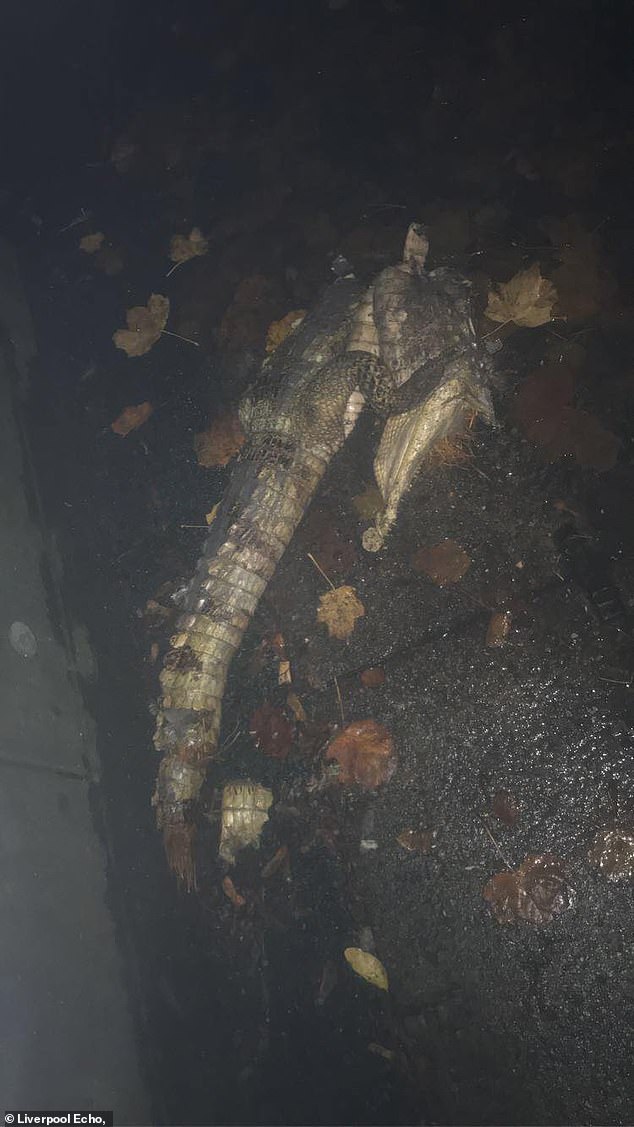 Throughout the day the animal was again photographed in further locations around the area before being seen cut in half on the pavement.

A Liverpool Echo reader, who did not want to be named, shared a number of pictures and said that when she told people what she saw, they didn’t believe her.

She said: ‘I was walking with my boyfriend on Lower Lane, about to turn onto Longmoor Lane, and didn’t really take any notice of it.

‘I thought it was maybe a branch or something but as we got closer he said “that’s a crocodile” but I told him it couldn’t be.

‘We got closer and I could see all the features and colour and scales so assumed it was maybe a teddy but we got right up to it and you could see its bones and teeth.’

By the time the woman had seen the crocodile, it had become cut in two, but after posting about it on social media others told her they had seen it intact earlier in the day.

She added: ‘People have been commenting saying they saw it on the road and then on the grass verge so I don’t know whether it has been run over or someone has cut it in half but you can see its spine sticking out.’

It is not yet clear how the croc became to be on the footpath in North Liverpool but people on social media have suggested a number of ways it could have ended up there.

The woman said: ‘Some people think that maybe someone kept it as a pet and it got too big so they’ve let it out and it has died.

‘Or maybe it has escaped from somewhere.’

A woman said: ‘Oh my god, what on earth. I need to know how on earth a crocodile has ended up chopped in half.’

Another added: ‘This is so so weird. Where’s that come from and what’s snapped it in half.’

TSB hires female chief after IT meltdown: Debbie Crosbie is most powerful woman in British banking
Teen went into a coma and woke up four days later to discover she had given birth
Widow, 80, is sued for £500,000 by her wealthy neighbours who say her trees have damaged their homes
UK parliament could go up in flames just like Notre Dame after catching fire 40 times in four years
Meghan Markle to ditch 'outdated' style Kate Middleton's children wear, former royal nurse claims
White House Press Sec getting into a scuffle with North Koreans
Brit teacher who held Alana Cutland as she tried to jump out of a plane pictured for the first time
Sky Sports News cause outrage after asking viewers to judge whether presenters are 'sexy'