The Pentagon reportedly advised against President ‘s request to build a trench alongside the U.S- border wall.

In a letter obtained by , the Pentagon sent Trump a memo in June 2018 pushing back against his suggestion of having a moat at the border in a bid to deter illegal crossings.

Mark Esper, who was Secretary of the Army at the time, said in his memo to Trump that a trench would cost the US Army Corps of Engineers more than other options being considered.

‘USACE determined that construction of an unreinforced 30′ x 30′ trench, while a deterrent, would take three to five times longer and cost approximately 20 percent more to emplace than other available options,’ Esper said. 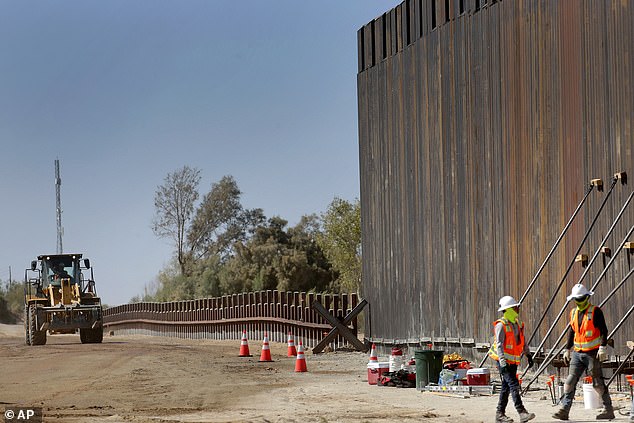 The Pentagon reportedly advised against President Donald Trump’s request to build a trench alongside the U.S-Mexico border wall. Government workers are pictured erecting a section of the wall

It was claimed last month that Trump wanted to have the border trenches filled with alligators and snakes as an extra deterrent to illegal border crossings.

Trump later denied the claim in a tweet, saying he wasn’t that tough.

‘The press is trying to sell the fact that I wanted a Moat stuffed with alligators and snakes, with an electrified fence and sharp spikes on top, at our Southern Border,’ he said in the October 1 tweet.

‘I may be tough on Border Security, but not that tough.’

Trump also reportedly wanted to paint the wall black so it would absorb more heat in the summer and make it harder for climbers to scale the metal.

Reports of the design plan at that time claimed Trump wanted a field-tested anti climbing surface. He wanted it to include metal points to look more intimidating, reports said.

The letter from Esper, who has since become Defense Secretary, made no mention of alligators or snakes but it did knock back the president’s idea of building trenches.

‘Only about 100 miles of the total border has geological conditions favorable to excavating an unreinforced 30′ x 30′ trench,’ Esper said. 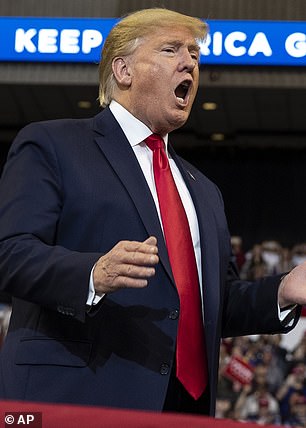 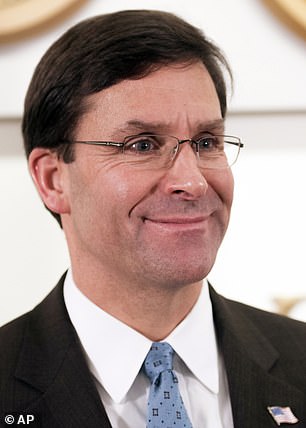 In a letter obtained by CNN, then-Secretary of the Army Mark Esper told Trump the trench idea would be too expensive

‘While addressing these challenges can be overcome in one way of another, the overall cost of constructing the trench – even with the most modern of machinery – is extremely expensive, and the time it would take to complete it would likely take much longer than other options the USACE developed.’

In his letter, Esper made two alternate recommendations for Trump to consider instead of the trench idea including a steel modular bollard wall and a version of a wall used in U.S. military operations overseas.

It came as the head of Customs and Border Protection told reporters on Thursday that the Trump administration had still not completed construction on a single mile of new border wall.

He said they were just starting to break ground in the Rio Grande Valley sector where there is currently no existing border wall structure. 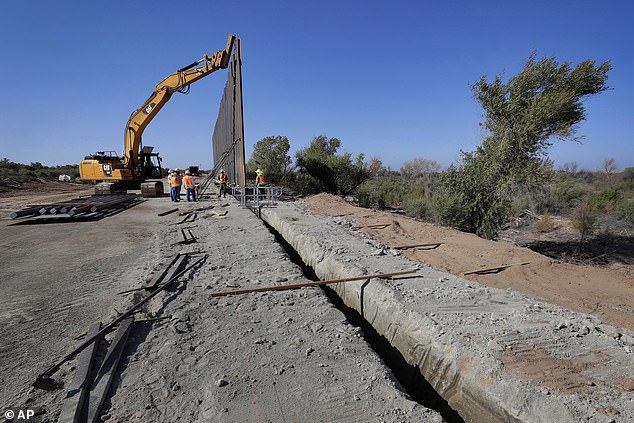 Government contractors erect a section of Pentagon-funded border wall in Arizona in September. The head of border protection said on Thursday that the Trump administration had still not completed construction on a single mile of new border wall

It emerged this week that officials will install a series of web cameras to live stream the construction of Trump’s border wall.

Trump’s son-in-law and White House adviser, Jared Kushner, first raised the idea at meetings in July to shut down criticism that the president was failing to deliver on his 2016 election promise.

The wall, which has cost $10billion in taxpayer money, is said to be facing several delays and stumbling blocks including officials having to purchase privately held land in Texas.

The move to install webcams has been met with some criticism from the the U.S. Army Corps of Engineers and U.S. Customs and Border Protection staff, the Washington Post reports.

Sources said the Army Corps told Kushner that contractors do not want rivals to see their method of building.

The officials also worried the cameras would show U.S. work crews violating Mexican sovereignty as they enter the country’s territory with equipment and vehicles to carry out their operations.

‘It’s understood that Kushner is so aggressive because the president has been asking him about it all the time,’ a senior White House official said.

It’s not clear how much the 24-hour webcam initiative will cost.

Saudi Arabia ADMITS Jamal Khashoggi is dead
Hilarious moment hungry squirrel is caught eating a Chinese egg roll up a tree in New York
Wife and her lover are charged with murder in the death of her Army soldier husband
Zombies end up photobombing high school students prom pictures
Jussie Smollett makes FINAL season appearance on Empire after co-stars lobby for his return on show
40% of new moms feel anxious or depressed in the first three months after giving birth, survey finds
Missing Connecticut mom had feared her husband would kidnap their five kids
Are these American stars too arrogant? Even France will be backing England