The White House on Friday released a transcript of the first phone call between the American and presidents, undercutting Democrats’ claims that tried to bribe his counterpart in Kiev with military aid money and a White House visit in exchange for a politically motivated corruption probe of .

Flying aboard Air Force One on April 21 between West Palm Beach and Washington, Trump offered Volodymyr Zelensky the high profile visit to 1600 Pennsylvania Avenue that the newly elected leader craved, without suggesting strings were attached.

‘When you’re settled in and ready, I’d like to invite you to the White House. We’ll have a lot of things to talk about, but we’re with you all the way,’ Trump told him, according to the transcript.

SCROLL DOWN TO READ THE WHITE HOUSE’S TRANSCRIPT 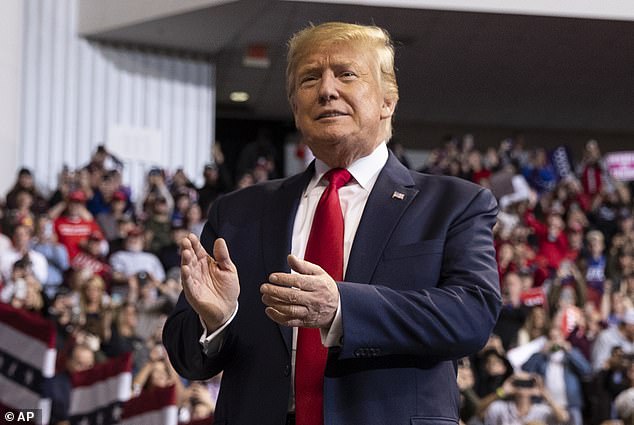 President Donald Trump stole some thunder from an impeachment process targeting him on Friday, releasing an innocuous-reading transcript of his first phone call with Ukrainian President Volodymyr Zelensky 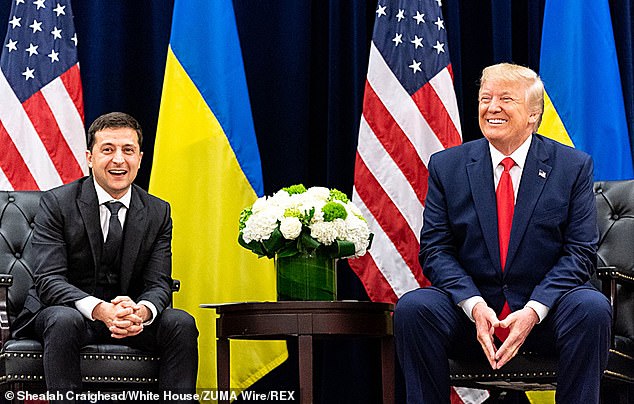 Trump met one-on-one with Zelensky at the InterContinental New York Barclay on the sidelines of the UNited Nations General Assembly on September 25; the White House hasn’t released information about the content of their private discussions

Everyone in that delegation has figured in some way in House Democrats’ impeachment push targeting Trump.

Democrats say the White House invitation was later withheld as leverage to induce an investigation of Biden, a move that House Speaker Nancy Pelosi called ‘bribery’ on Thursday.

A White House official said Friday morning that the call shows ‘POTUS wasn’t targeting Biden politically. If that were the idea he would’ve started in April, not July.’

Trump’s second call with Zelensky, a longer July 25 conversation, has become the centerpiece of Democrats’ argument that Trump is unfit for office, based on a cryptic mention of a ‘favor’ that the U.S. president wanted from him and a mention of Biden.

The president has claimed Joe Biden (left) used the power of the vice presidency to block a Ukrainian corruption investigation into Burisma Holdings, a company where his son Hunter (left) held a lucrative board seat

A White House spokesperson did not respond to a request for comment.

Hours after the April 21 call, the White House released a ‘readout’ to reporters, describing the conversation in broad strokes—largely as proof that Trump had contacted the newly elected president of a key regional ally whom Russia had invaded in 2014.

Trump ‘expressed his commitment to work together with President-elect Zelenskyy and the Ukrainian people to implement reforms that strengthen democracy, increase prosperity, and root out corruption,’ according to the transcript.

A second White House official said Friday that such transcripts are often released by press secretaries whether or not the participate in the calls, and generally reflect what policy aides want to see communicated to the public.

The official confirmed that Sarah Sanders, who was the White House press secretary at the time, did not listen to the April 21 phone call. 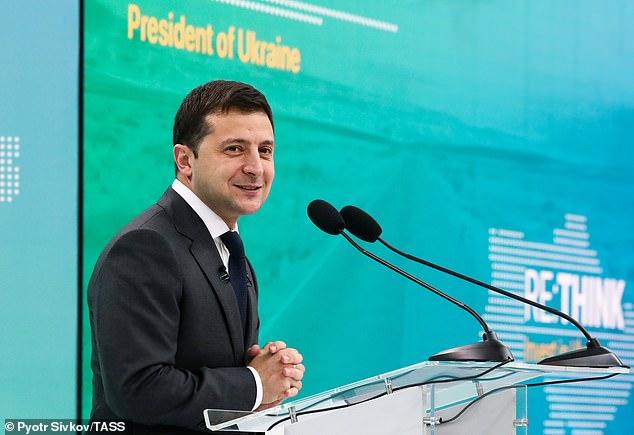 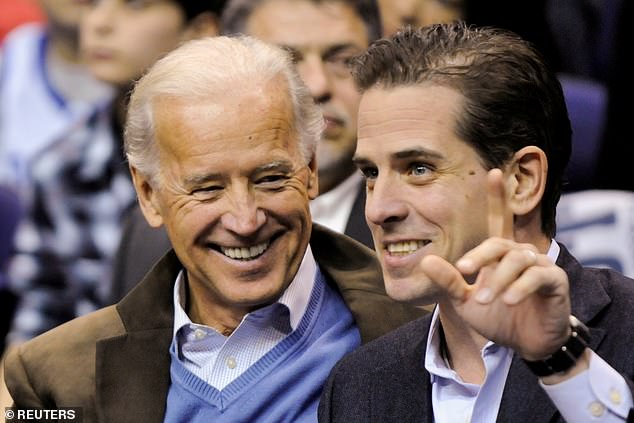 Trump has claimed Joe Biden (left) used the power of the vice presidency to block a Ukrainian corruption investigation into Burisma Holdings, a company where his son Hunter (left) held a lucrative board seat

‘I’m grateful the president has released the call record. I would now ask ask the president to release the thousands of other records that he has instructed the State Department not to release,’ he said.

White House Press Secretary Stephanie Grisham said in a statement that Trump ‘will be watching Congressman Nunes’ opening statement,’ but that ‘the rest of the day he will be working hard for the American people.’

The document the White House released is ‘not a verbatim transcript of a discussion,’ it says in a footnote.

Calls between U.S. presidents and world leaders are typically not recorded and transcribed in the West Wing. Instead a variety of experts from the White House, the State Department and various intelligence agencies take notes as they listen in, and then assemble a memorandum, taking note of any portions that are unintelligibe on the phone line. 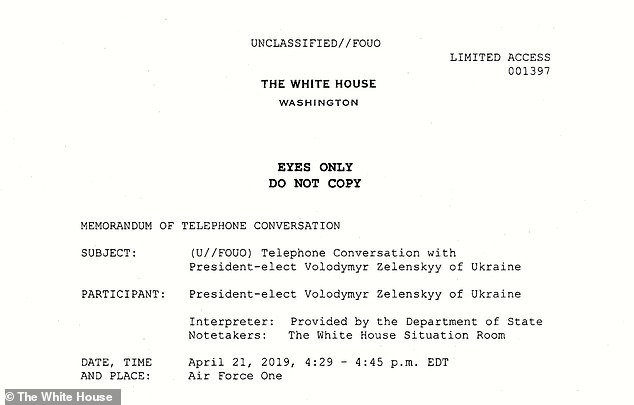 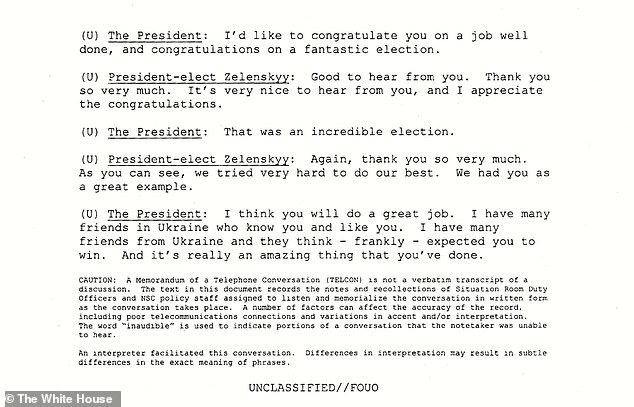 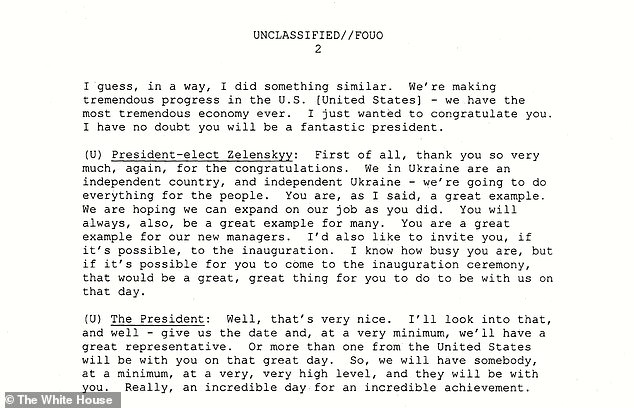 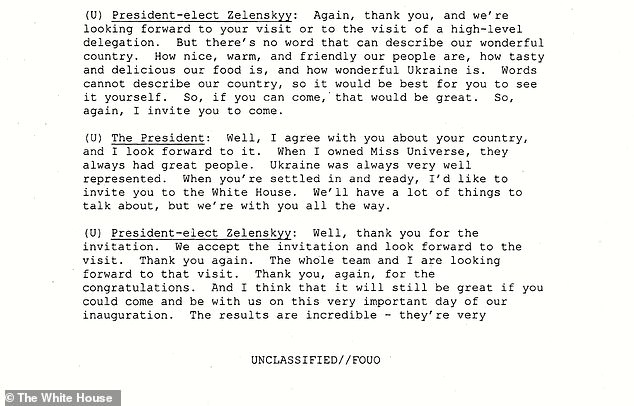 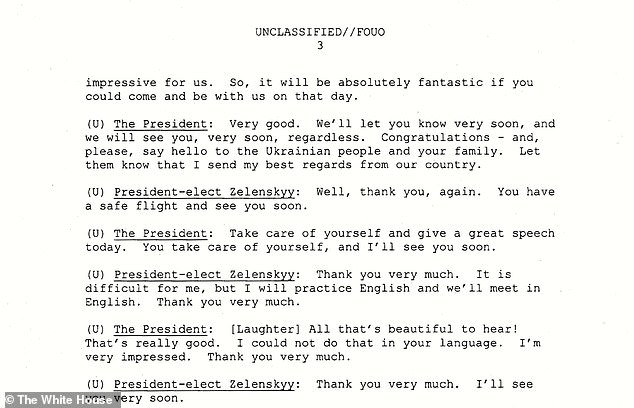 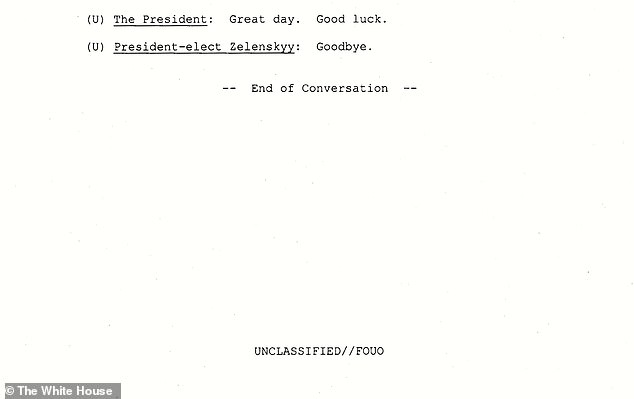