A libel case against Tommy Robinson over comments he made about a Syrian refugee who was filmed being attacked in a school playground has reached the High Court.

The EDL founder is being sued for libel after suggesting Jam Hijazi, 16, was pushed to the ground and ‘waterboarded’ because he had assaulted white girls.

A video showing Mr Hijazi, 16, being attacked ‘ in the playground at his school in Huddersfield was shared nationwide in November last year.

It drew condemnation from refugee charities and even the Prime Minister and led to a 16-year-old boy being given a caution for racially aggravated assault. 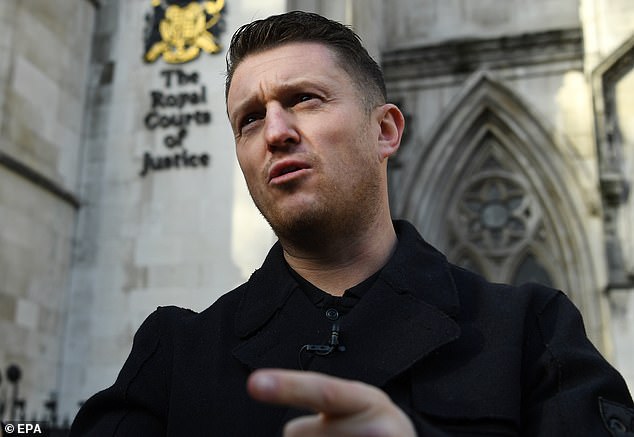 Tommy Robinson outside the High Court in London today, where he is being sued for libel by Syrian schoolboy Jamal Hijazi and his family 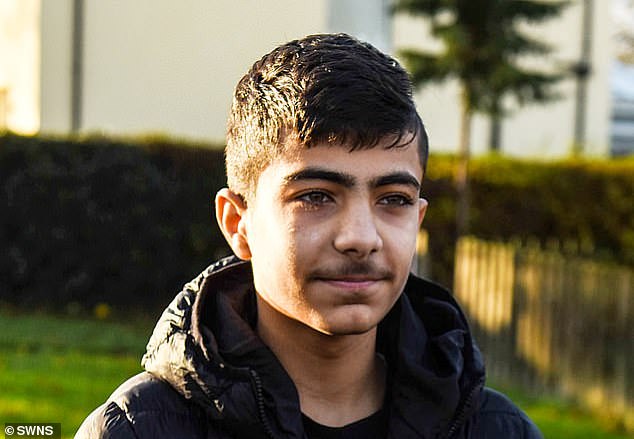 Robinson, 36, whose real name is Stephen Yaxley-Lennon, later commented about the video on Facebook.

He wrote: ‘He violently attacked young English girls in his school. Why is this kid being portrayed as the ultimate victim in the entire country?’

Robinson attended a preliminary hearing in London on Thursday, which set a timetable for a six-day trial to be heard at some point in 2020.

Jamal’s barrister Ian Helme told the court that the claim was brought in relation to the aftermath of ‘the viral publication of a video last year in which Jamal was horrifically bullied at school’.

Mr Helme added that Robinson, who he described as ‘a right-wing provocateur’, then published ‘two videos making very serious allegations against Jamal’.

The barrister said Jamal was ‘a schoolboy and a Syrian refugee who has faced horrific bullying at school’, adding that the effect of the videos was that he ‘now has his nascent reputation trashed to one million people’. 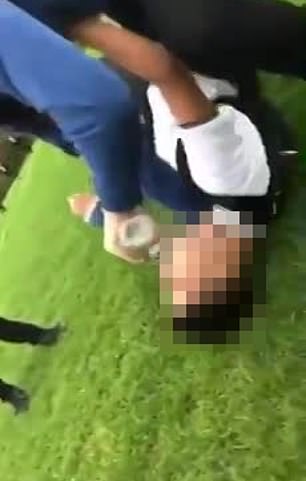 A video showing Jamal, 16, being pushed to the ground and ‘waterboarded’ in the playground at his school in Huddersfield was shared nationwide in November last year

The court heard that Robinson would defend the truth of the statements he made about Jamal at trial.

William Bennett QC, for Robinson, said the case would come down to the ‘oral testimony of one witness against another’.

He added that his client’s defence would focus on ‘those people who say they were assaulted by the claimant and the claimant’s denials that he assaulted them’.

In documents filed with the court on Robinson’s behalf, he alleges that the attack on Jamal shown in the video was in retaliation for a threat made earlier that same day.

Robinson previously made contact with the boy cautioned over Jamal’s assault.

He told the far-right, anti-Islam activist he was ‘scared for his life’ and had gone into hiding after the video of the incident at Almondbury Community School went viral.

When Robinson posted comments about Jamal, who arrived in the UK as a refugee from Syria, he claimed he had ‘hit a girl with a hockey stick’. He then said that ‘lots of Muslim gangs are beating up white English kids in Britain’.

The disturbing footage from November 2018 shows Jamal being approached by one of his fellow pupils before being wrestled to the ground.

The attacker grabs his neck and pins him to the floor while pouring a bottle of water over his face – leaving him struggling to breathe.

The memoirs of the late DENIS NORDEN reveal his own life was as funny as his show
Emma Stone admits she felt 'gloomy' turning 30 as she covers British Vogue
'He beat me and left me for dead. Now I'm the one in hiding'
Helen Mirren reveals why she felt objectified in every one of her famous scenes
'Thank you for the unconditional support': Andre Gomes speaks for the first time since horror injury
Deadly coronavirus outbreak is costing travel firms billions of pounds
At least 50 doctors are dead from coronavirus in Italy
Testing data estimates only 33,000 people in England have Covid-19