is pledging to spend £26billion on the by 2024, £6billion more than the Tories have promised, by taxing the rich.

Health Secretary John McDonnell will today announce their strategy to raise the Department of Health’s annual budget by £40billion over the next five years.

The Tories say this is not feasible due to Labour’s proposed four-day week which will lead to severe shortages in doctors and nurses.

Health Secretary Matt Hancock said: ‘Labour won’t increase the NHS budget, they will cut it. Jeremy Corbyn’s plans for a four-day working week will cripple our economy and cost the NHS billions each year.

‘That leaves a huge funding shortfall in Labour’s plans and it is patients who will pay the price for Corbyn’s incompetence.’ 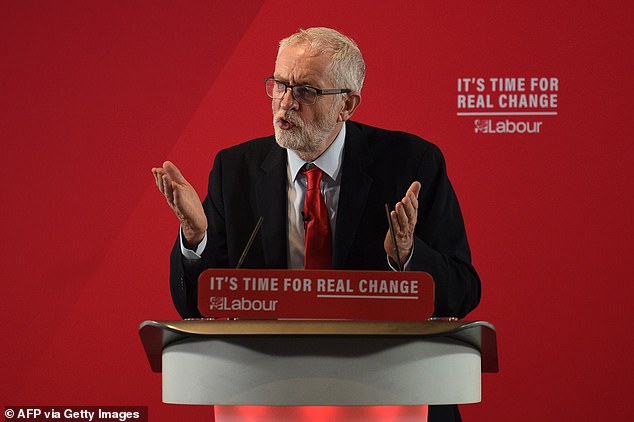 Jeremy Corbyn is pledging to spend £26billion on the NHS by 2024, £6billion more than the Tories have promised, by taxing the rich (pictured: Mr Corbyn speaking in Blackpool on Tuesday) 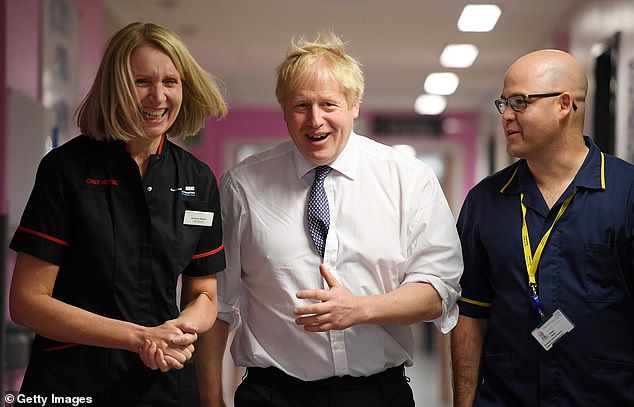 joked with rowdy photographers that ‘under Socialism you will all cooperate’ as he hit the campaign trail in Blackpool on Tuesday.

He issued the message as the media jostled for position during a picture opportunity in the seaside resort.

‘No guys, you’ve got to cooperate,’ the veteran left-winger told the crowd.

‘You see, under Socialism you will all cooperate.’

Despite the light-hearted nature of the jibe, Mr Corbyn was branded ‘sinister’ on social media, with some users suggesting it showed how everyone will have to ‘obey the dear leader’ if Labour wins power in the election.

The Tories claim that the party’s spending plans – which include re-nationalising rail, water and power – would cost £1.2trillion.

Ms Rayner and Jeremy Corbyn today set out the party’s education pledges – but one of Labour’s policies was immediately plunged into uncertainty.

Mr Corbyn said during his speech that Labour would provide a free school meal for every child in primary school, paid for by applying VAT to private school fees.

But Labour activists voted at the party’s annual conference at the end of September to abolish all private schools.

Mr McDonnell thinks he can bring in the funds by reversing corporation tax cuts and tax the wealthiest in the country.

Labour says the policy to for a 32-hour working week will happen gradually over a decade and would not be immediately imposed.

It comes as Mr Corbyn today joked with photographers that ‘under Socialism you will all cooperate,’ while out on the campaign trail in Blackpool.

The latest polls show that Boris Johnson has surged to a 14 point lead over Mr Corbyn after Nigel Farage announced the Brexit Party will stand aside in seats won by the Tories in 2017.

That decision appears to have had a massive impact on the election campaign with the Tories now polling at 42 per cent while Labour has slipped to 28 per cent.

The health spending battleground will be crucial in the fight between Mr Corbyn and Boris Johnson, with polls showing voters are strongly in favour of further spending on the NHS.

They are anticipated to announce an annual average 4.3% funding increase for health spending over the next four years, funded from Labour’s proposals to reverse corporation tax cuts and tax the wealthiest people in society.

Mr McDonnell is expected to say: ‘The world-class health service we all need and depend on needs proper funding.

‘Labour’s policies to tax the richest in society and invest for the future through our Social Transformation Fund mean we will be able to improve millions of lives. 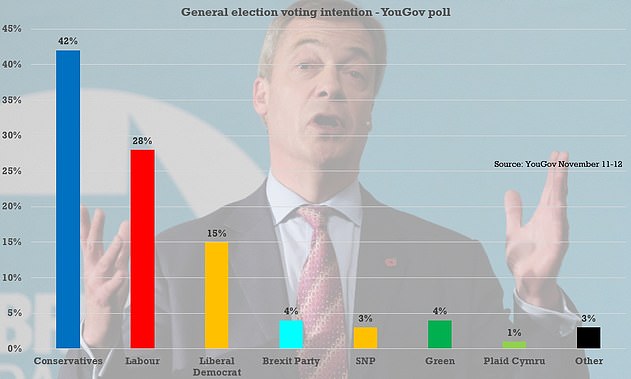 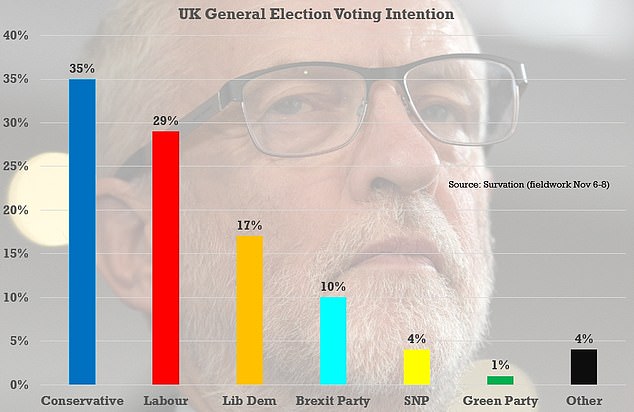 A new Survation poll puts the Conservative Party on 35 per cent and Labour on 29 per cent, conducted between November 6-8 and before Mr Farage’s announcement 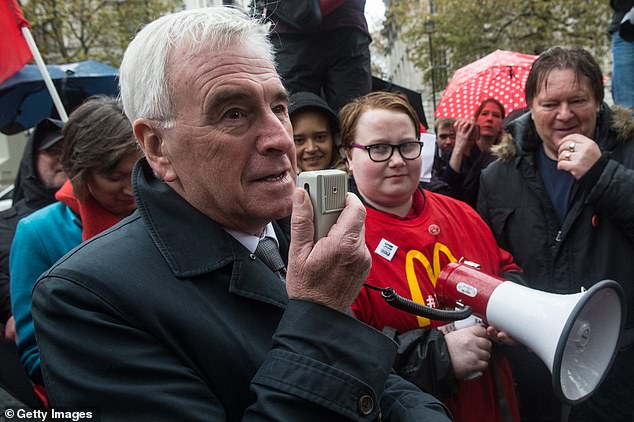 John McDonnell will today outline £26million of spending on the NHS by 2024 at a speech at the Royal Society of Medicine (pictured: Mr McDonnell attends a protest in support of striking McDonald’s workers at Downing Street on Tuesday)

‘And ending privatisation means that money can be spent on healthcare rather than dividends for Boris Johnson’s friends in the private healthcare industry.’

Johnson surges in the polls after Farage backs off

has surged to a 14 point poll lead over Jeremy Corbyn after Nigel Farage announced the Brexit Party will stand aside in seats won by the Tories in 2017.

Mr Farage tore up his election strategy yesterday as he said the Brexit Party will give the Tories a clear run in 317 constituencies on December 12.

That decision appears to have had a massive impact on the election campaign with the Tories now polling at 42 per cent while Labour is back on 28 per cent.

Mr Farage’s support dropped six points on last week, putting the Brexit Party on 4 per cent according to the poll taken on Monday and Tuesday this week.

The poll deliberately excluded the Brexit Party in the Tory-held seats where Mr Farage will not stand against Conservatives, explaining the drop in support.

Meanwhile, the Liberal Democrats are on 15 per cent. The YouGov poll for The Times suggests Mr Farage has significantly increased Mr Johnson’s chances of retaining the keys to 10 Downing Street.

It comes after a Survation poll, conducted before Mr Farage’s bombshell election announcement, suggested the Tories were six points ahead of Labour.

That survey put the Conservatives on 35 per cent and Labour on 29 per cent with the Lib Dems and Brexit Party both going backwards.

There will be a focused drive on prevention measures to stop people getting sick, as part of Labour’s mission to tackle health inequalities and prioritise children’s health and well-being.

Mr Ashworth is expected to say: ‘With experts warning this winter is set to be one of the worst, the truth is our NHS is crying out for a financial rescue plan to deliver real change for patients.

‘We are announcing today the levels of investment our NHS needs to not only again provide the quality care our sick and elderly deserve but secures the NHS for the future as well.

‘We’ll invest more to prevent people becoming ill in the first place and we’ll give mental health and well-being a greater priority than ever before.

‘This General Election is about millions on waiting lists and hundreds of thousands who’ve waited on trolleys under the Tories – only Labour has a plan to rescue our NHS.’

Ms Berger said: ‘Labour’s health announcement today completely misses the point. They are ignoring the fact that Brexit is the biggest threat to the NHS – if Labour allow Brexit to happen, they cannot rescue our NHS.

‘Brexit has already cost the economy as much as £66 billion. If Corbyn had not tacitly supported Brexit, Labour could have funded their NHS plan more than two times over.

‘Only the Liberal Democrats can offer voters a brighter future through stopping Brexit and transforming our NHS and social care services for the future.’ 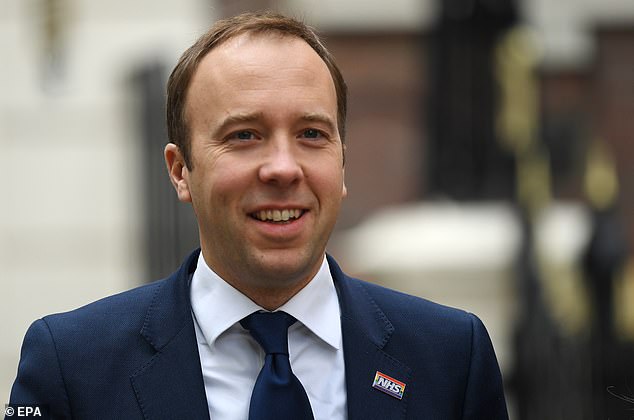 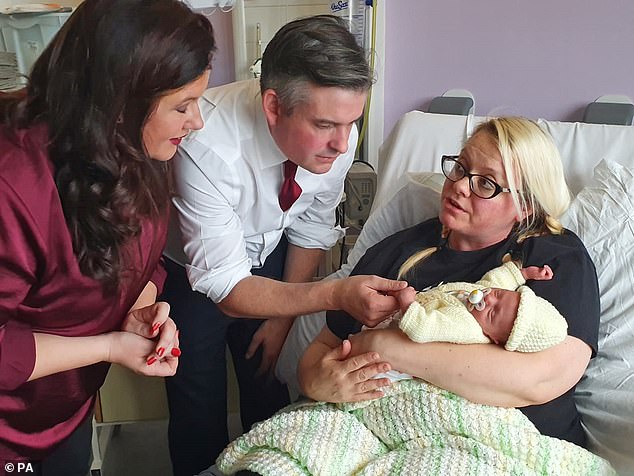 Shadow health secretary John Ashworth is expected to say: ‘With experts warning this winter is set to be one of the worst, the truth is our NHS is crying out for a financial rescue plan to deliver real change for patients’ (pictured: Mr Ashworth at Kings Mill hospital in Ashfield on Tuesday) 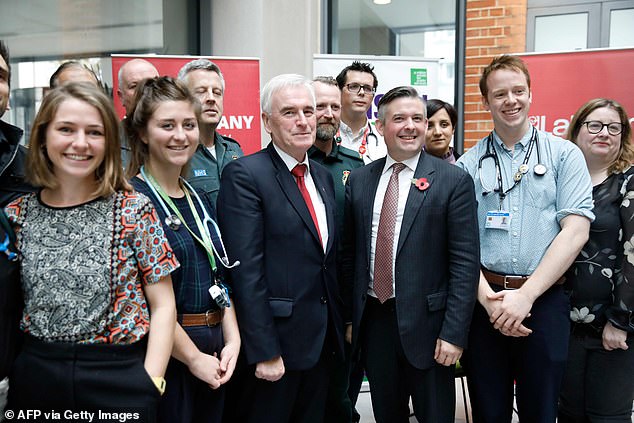 However Nuffield Trust chief executive Nigel Edwards said this funding would mean the NHS could ‘breathe a sigh of relief’, adding: ‘A 4% increase a year will make a big difference compared to the 1.4% average the NHS has grown used to in recent years. 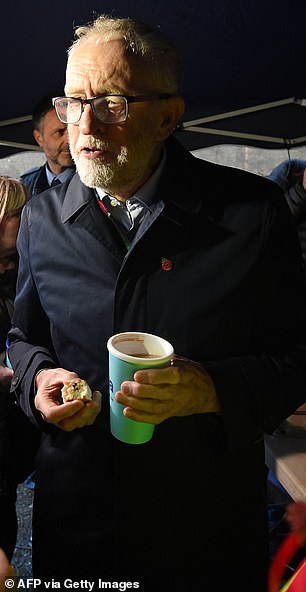 ‘It is enough to get most waiting times back on track over time, but tough decisions will still have to be made.

‘Although ‘ending privatisation’ will appeal to many, stopping the NHS from funding private procedures will not actually save much money as private companies and NHS trusts get paid the same price per operation.’

Mr Edwards said money is not the be-all and end-all, pointing out that extreme staff shortages are the greatest problem facing the NHS.

Richard Murray, chief executive of The King’s Fund, said: ‘The success of any NHS funding policy will rest on the ability to recruit and retain enough workers to staff NHS services.

‘Labour’s pledge to reinstate a training bursary for nurses is welcome, although it will be critical to focus on retaining existing NHS staff over the next few years, at a time when many are leaving the service due to the intensity of their workload.’

Mr Murray said that for many UK voters, the distinction between the NHS and social care is unclear, and many are surprised to find that social care is not free at the point of use. 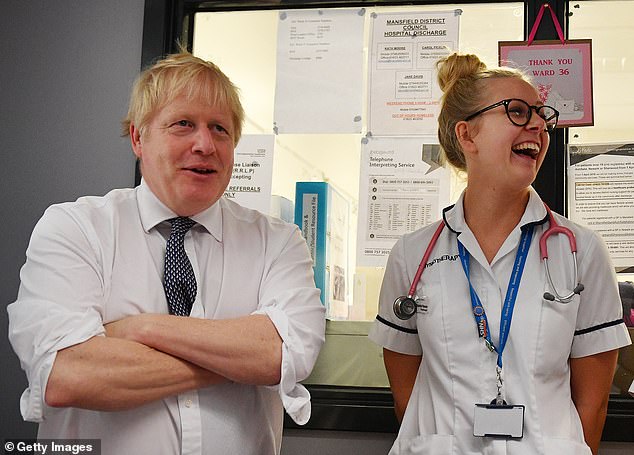 ‘The current social care system is not fit for purpose and is failing the people who rely on it. A key test for party manifestos will be whether they include plans for fundamental reform of social care funding,’ he said.

Unison general secretary Dave Prentis said: ‘This rescue plan can’t come soon enough and will give hope to health service employees and patients across the UK. It takes the NHS back to the time before heartless Tory cuts.’

Dame Donna Kinnair, chief executive and general secretary of the Royal College of Nursing, said all parties need to commit to investing in nursing, adding: ‘No matter how people voted in the EU referendum, nobody wants the NHS left open to a carve-up as a result of a post-Brexit trade deal.

‘Brexit chaos and rows about deals cannot become a distraction from solving the mounting nurse shortage at home.’

Niall Dickson, chief executive of the NHS Confederation, which represents organisations across the healthcare system, said further detail is needed from parties about their plans to tackle the crisis in social care, an issue he said politicians of all parties have ‘ducked for too long’.

Mark Littlewood, director general at the Institute of Economic Affairs, said: ‘The endless billions of pounds that are being pledged to the National Health Service in this election cycle are not costed, not responsible, and crucially are not going to cure the health system’s long-term ails.

‘The NHS remains an international laggard in terms of health outcomes and has some of the highest rates of avoidable deaths in western Europe. The structure of the NHS is fundamentally outdated and no amount of money is going to get the health system to function and operate at the level patients deserve.’

Rival Korea leaders to fulfill in Pyongyang; date not but...
Dashing motorist killed teenager in `act of grotesque...
Tyson Fury defeats Tom Schwarz by second round TKO in Las Vegas on ESPN debut
Chilling footage shows teen stalking 'role model' student before stabbing him in the chest
UK 'could ban ALL flights from China and block foreign citizens from entering'
Metropolitan Police refer themselves to watchdog over contact officers had with Caroline Flack
Coronavirus is NOT 'man-made or genetically modified,' U.S. intelligence agencies conclude
Americans get sick from their food each year - no wonder Britons refuse to eat it, says Sue Davies