today bowed to massive pressure by declaring he will not split the Eurosceptic vote at the election.

The Brexit Party leader made the dramatic announcement at an event in the target seat of Hartlepool to set out his approach to the looming poll.

He said many people were suffering from ‘Brexhaustion’ and he had initially concluded it was ‘not Brexit’.

But he insisted that he had been swayed by Mr Johnson’s pledge last night that the transition period will not be extended beyond the end of 2020, and he wants a ‘Super Canada Plus’ trade deal.

‘That sounds a bit more like the Brexit we voted for,’ Mr Farage said. ‘Last night I weighed up Boris’s promises and is he going to stick to them, against the threat, particularly in the south and south west, that we let in a load of Lib Dem Remainers,’ he said.

‘The Brexit Party will not contest the 317 seats the Tories won at the last election. But what we will do is concentrate our efforts on the seats held by the Labour Party. And we will take on the rest of the Remainer parties. We are not going to fight 600 seats.’

Mr Farage said he had unilaterally formed a ‘Brexit Alliance’ with the Tories.

‘I think our action today prevents a second referendum from happening,’ he said.

The Brexit Party’s chairman Richard Tice is standing as a candidate in Hartlepool.

But the Brexit Party leader is under growing pressure to clear the way for the Tories on December 12 amid growing fears that he could scupper ‘s hopes of a majority.

A number of Brexit Party candidates have already decided to quit so that they do not cost the Tories marginal seats.

The latest to do so is Elaine Adams who had been due to stand in the knife-edge constituency of Telford. 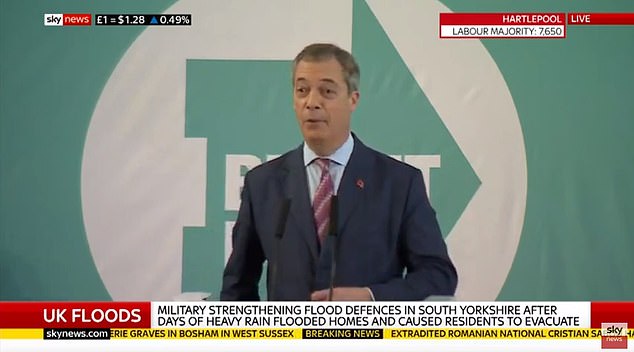 Brexit Party leader Nigel Farage made the dramatic announcement at an event in the target seat of Hartlepool to set out his approach to the looming poll. 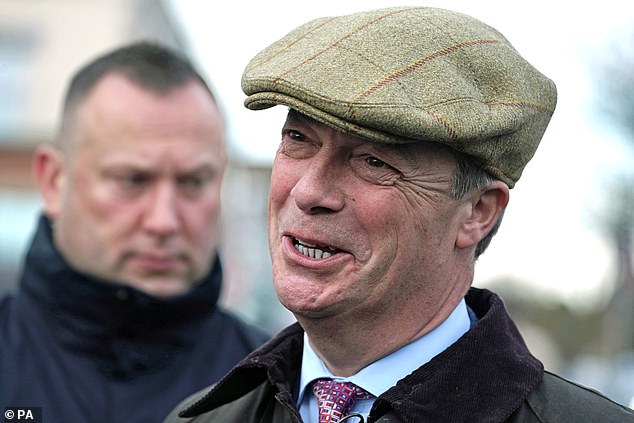 Nigel Farage, pictured today, will formally launch the Brexit Party’s election campaign at an event in Hartlepool this afternoon 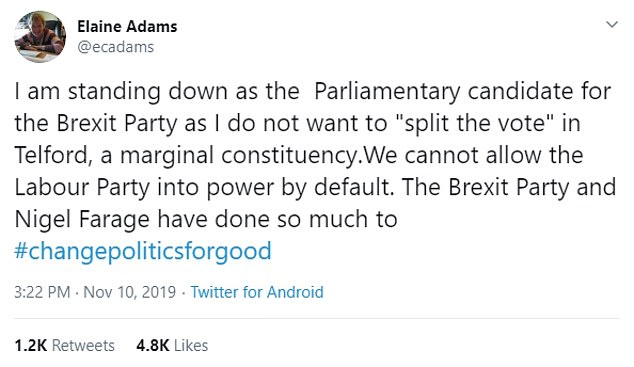 Announcing her decision not to contest the seat at the pre-Christmas poll Ms Adams said she did not want to ‘allow the Labour Party into power by default’.

She tweeted: ‘I am standing down as the Parliamentary candidate for the Brexit Party as I do not want to “split the vote” in Telford, a marginal constituency.

‘We cannot allow the Labour Party into power by default. The Brexit Party and Nigel Farage have done so much to change politics for good.’

Telford was held by the Tories at the general election with a majority of just 720 votes.

The area voted 66 per cent for Leave and 34 per cent for Remain at the EU referendum in 2016 making it a prime target for Mr Farage.

Ms Adams’ decision to stand down comes after Peter Udale, the Brexit Party candidate in the Cotswolds, announced he would make way for the Tories as he threw his weight behind Mr Johnson.

Citing Jeremy Corbyn as the biggest ‘threat’, Mr Udale told the Telegraph: ‘I therefore believe it is fundamentally wrong for the Brexit Party, which is strongly patriotic and has a deep allegiance to our union, to stand candidates in constituencies where the Tories have a chance of winning.’

Mr Farage has vowed to stand candidates in every seat across England, Scotland and Wales if Mr Johnson does not agree to a Leave Alliance. 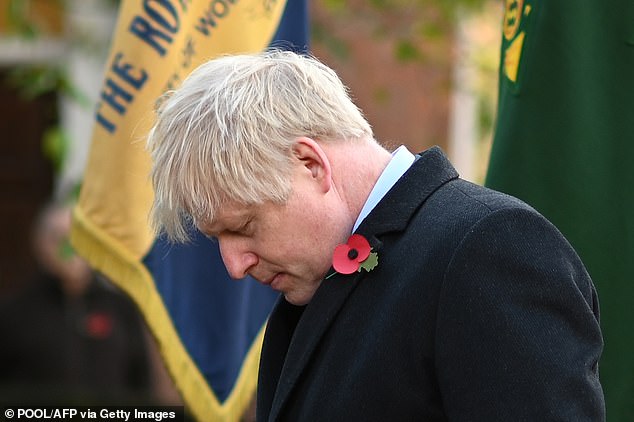 The Brexit Party leader wants Mr Johnson to ditch his Brexit agreement and campaign for a No Deal split instead.

Mr Farage believes the PM’s deal would leave the UK too close to the EU after Brexit but Mr Johnson is campaigning on a pledge to implement his accord.

Mr Johnson last night offered his rival an olive branch by using a video on social media to rule out an extension of the Brexit transition period beyond the end of next year.

He also stressed that he would pursue a ‘straightforward free trade deal’ with the EU that was ‘not based on any kind of political alignment’.

CRAIG BROWN on the unusual regional words introduced into the latest Oxford English Dictionary
Police officer is sacked after claiming Adolf Hitler 'had never done him any harm'
Georgia woman charged with murder after dropping baby during fight
TV weatherman Bill Giles claims climate change could be a BOOST for Britain
Harry Dunn's parents accuse British and US authorities of treating them like 'dirt'
UK vegan cheese manufacture banned from calling its product PARMESANS
Samantha Markle boasts she was 'right all along' about her half-sister Meghan
Heart-warming moment coronavirus medic enjoys a beautiful sunset with his patient, 87