Mystery surrounds the death of a British man who co-founded Syria’s White Helmets group after he fell from his balcony in Istanbul days after Russia accused him of being an MI6 spy.

James Le Mesurier, who set up the volunteer-led group that enters bombed areas in the war-torn country to help civilians, died outside his home in the Beyoglu district in Turkey’s largest city.

His wife told police that he had been taking medicine to treat ‘intense stress’ and that they had moved to the area so that he could be near the health centre, Anadolu reported.

It has been alleged that these were anti-depressant pills, according to Turkey’s DHA news agency. A security source told Reuters his death was being treated as suspected suicide.

However, suspicions have also been raised that his death may have been ordered by a state actor.

The White Helmets have become a favourite target of pro-Syrian and pro-Russian groups who have accused the group of supporting terrorists in Syria and doctoring footage of atrocities committed by regime forces – claims strongly denied by its supporters.

Just three days ago, the Russian Ministry of Foreign Affairs accused Mr Le Mesurier of being ‘a former agent of Britain’s MI6’. 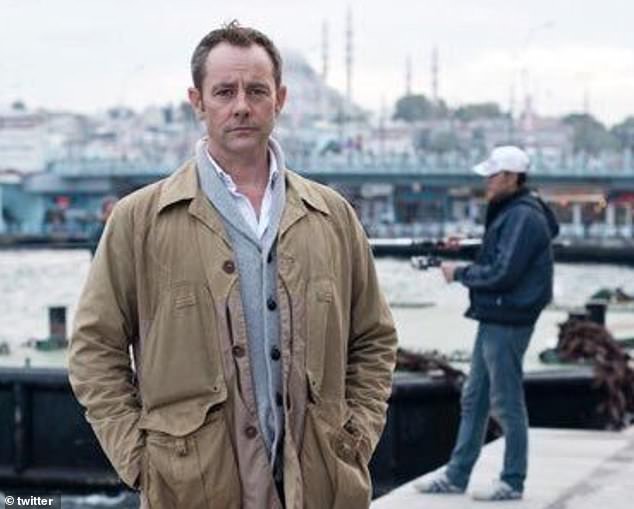 James Le Mesurier, pictured on Twitter, was found dead outside his home in Istanbul’s Beyoglu district in Turkey’s largest city this morning 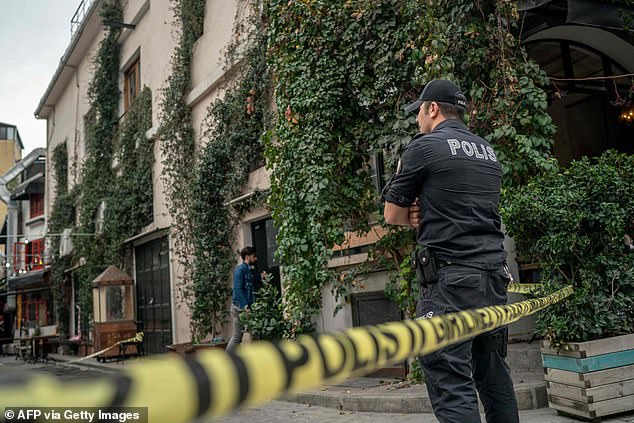 He fell from a balcony on the block of flats where he lives with his wife. (Pictured: A Turkish police officer stands guard outside the offices. It is not known which balcony he jumped from) 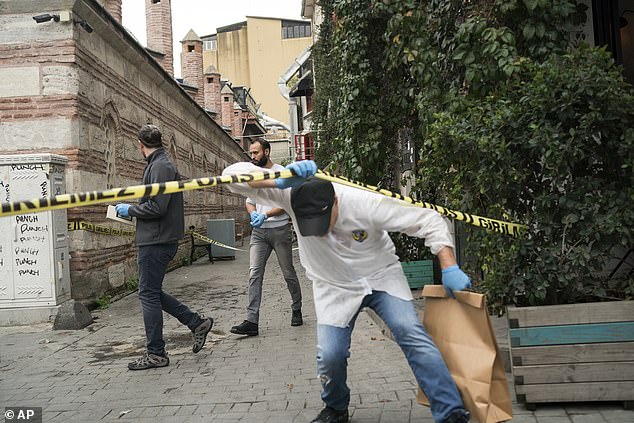 His wife said he had been taking medicine to help with ‘extreme stress’, reports Anadolu, although suspicions that he was murdered have also been raised. (Pictured: Police forensic officials work at the site in central Istanbul’s Beyoglu district today) 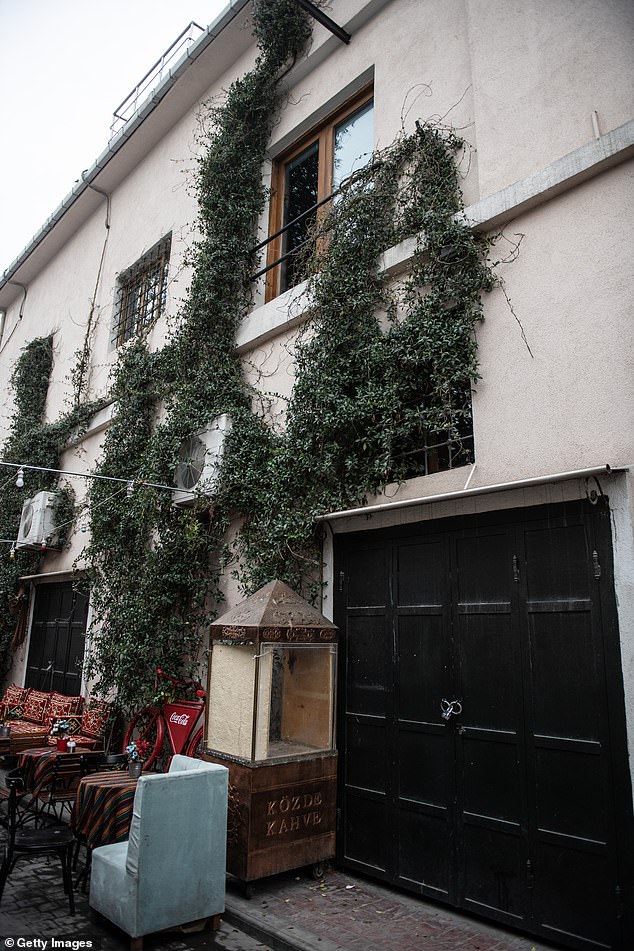 The sealed entrance of the home where Le Mesurier was found dead this morning while his wife was sleeping. It is not known which balcony he fell from

The Good Samaritan, who was also a British Army officer and established Mayday Rescue that helped train the White Helmets in 2013, was honoured by the Queen with an OBE in 2016.

There is a ‘good level’ of suspicion that his death may be ‘murder by a state actor’, BBC journalist Mark Urban reports, although this is yet to be confirmed.

She told police that they had been up until 4am (1am GMT), and then took sleeping pills, reports Anadolu.

His wife was then woken by a doorbell and saw her husband’s body from the open window of their third floor apartment.

Le Mesurier’s body was found at 4.30am local time (1.30am GMT) on the street in front of an office building used by Mayday rescue that also doubles up as his home.

He suffered fractures to his legs and head, reports in Turkey claim, and state that his wife also does not believe that there were any signs of foul play. 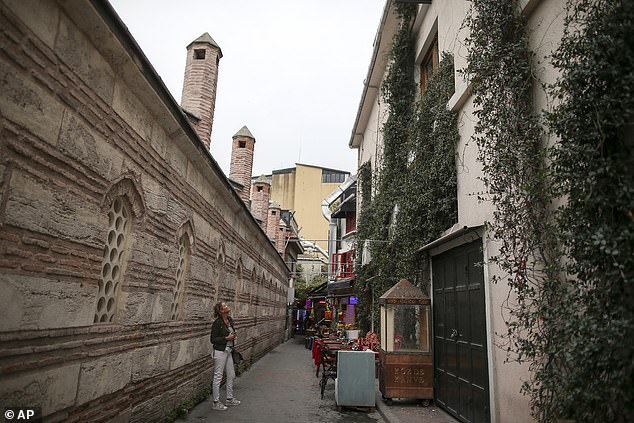 Le Mesurier’s body was found outside his flat at 4.30am local time, pictured on the right. It is not known which balcony he fell from 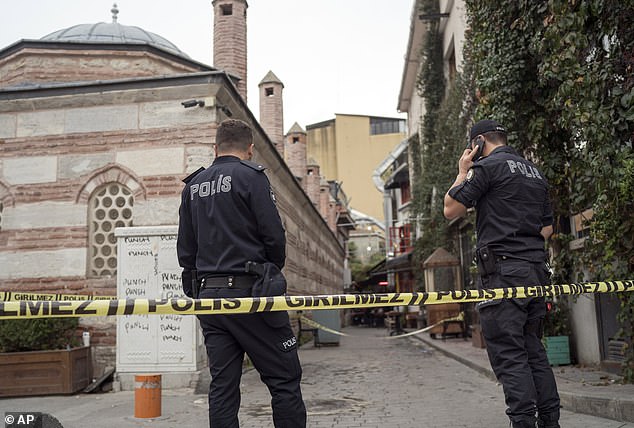 Police officers stand guard outside the flats this morning. Suspicion surrounds the death of the Good Samaritan, with some alleging it was murder by ‘a state actor’ 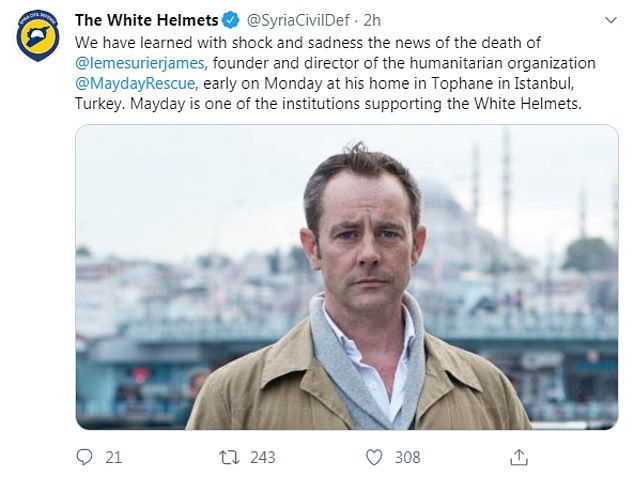 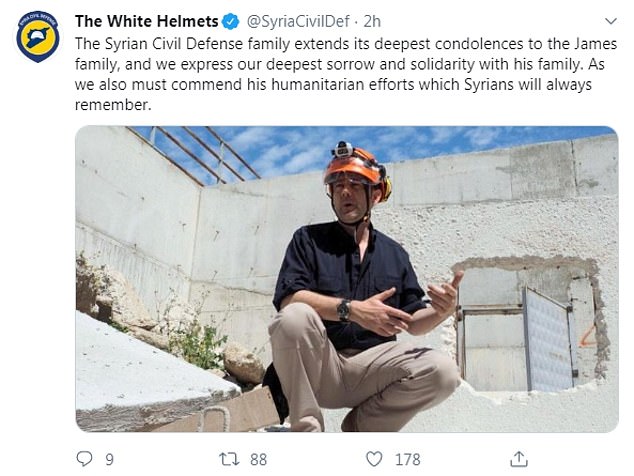 The Istanbul governor’s office has launched a ‘comprehensive administrative and judicial investigation’ into Le Mesurier’s death, as his body waits for an autopsy.

Police in the city have established that no one had entered or left his home at the time of his death, reports Turkish agency Anadolu.

Posting on Twitter this morning the White Helmets extended their ‘deepest condolences’, ‘sorrow’ and ‘solidarity’ to Le Mesurier’s family.

‘We have learned with shock and sadness the news of the death of James Le Mesurier, founder and director of the humanitarian organisation Mayday Rescue, early on Monday at his home in Tophane in Istanbul, Turkey’, they said on Twitter.

‘The Syrian Civil Defense family extends its deepest condolences to the James family, and we express our deepest sorrow and solidarity with his family.

‘As we also must commend his humanitarian efforts which Syrians will always remember.’ 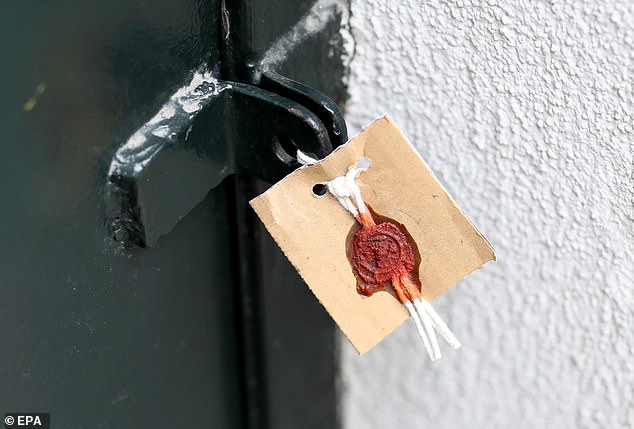 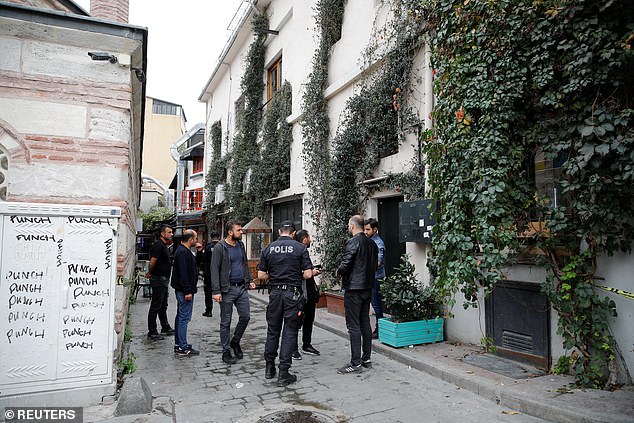 Police officers pictured outside the home. They have said that no one entered or left the property at the time he fell, reported Anadolu 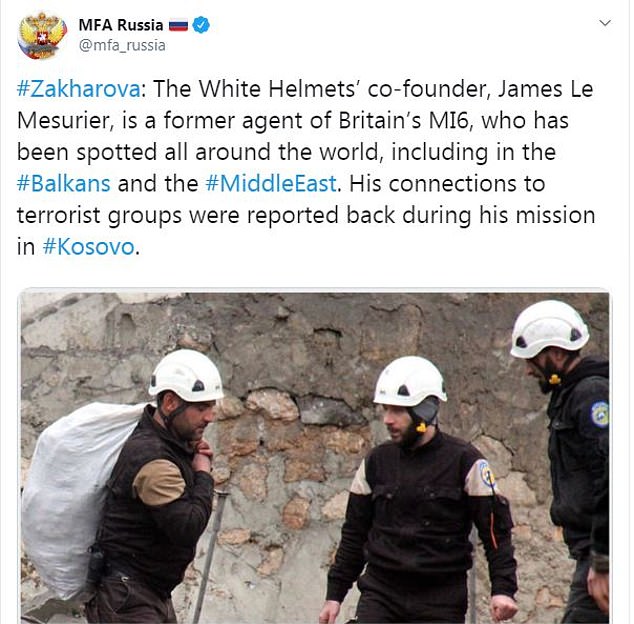 Just three days ago, Le Mesurier was accused of being a spy in a tweet by the Russian Foreign Ministry

The head of the White Helmets, Raed al-Salah told that the group is ‘devastated’ by his death and heralded Le Mesurier as a ‘close friend to us and to the Syrian people’.

‘We were informed by his family that he had died’, said al-Salah.

‘As of now, the police are investigating the case and have drawn no conclusions yet. We are waiting for the police report.’

On Friday, the Russian Ministry of Foreign Affairs tweeted: ‘The White Helmets’ co-founder, James Le Mesurier, is a former agent of Britain’s MI6, who has been spotted all around the world, including in the Balkans and the MiddleEast.

‘His connections to terrorist groups were reported back during his mission in Kosovo.’ 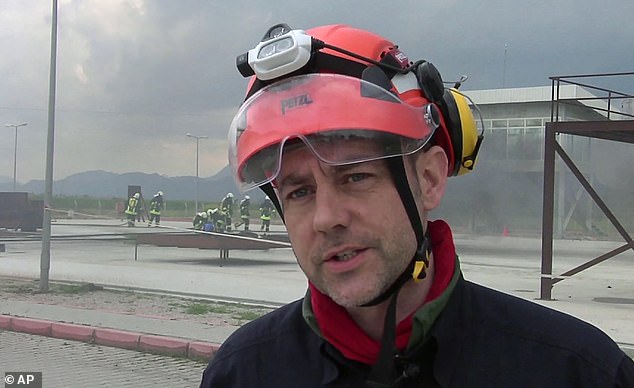 Known officially as Syria Civil Defence, the White Helmets are a voluntary search-and-rescue group formed to respond to bombings by Syrian government forces

Le Mesurier was a former British Army officer who founded Mayday Rescue, which helped train the White Helmets when it began in 2013

The humanitarian was reportedly 48 years old and had moved to Turkey with his wife four years ago.

He was honoured by the Queen with an OBE in 2016 for ‘services to the Syria Civil Defence group and the protection of civilians in Syria’.

He formed the voluntary search-and-rescue group called the White Helmets, which says it has rescued more than 100,000 civilians during Syria’s brutal civil war.

It has lost 252 volunteers to date and more than 500 have been wounded.

The group was nominated for a Nobel Peace Prize in 2016 and received the Right Livelihood Award in recognition of ‘outstanding bravery, compassion and humanitarian engagement in rescuing civilians’.

Le Mesurier told in 2015 that he had begun training and supporting the organisation in early 2013 alongside Turkish rescue experts, starting with ‘a single team of 20 people’.

‘I was working in Istanbul… and got together with a group of Turkish earthquake rescue volunteers,’ he said.

The White Helmets quickly expanded, and are credited with saving tens of thousands of lives during Syria’s conflict.

A documentary about the group won an Academy Award in 2017.

The White Helmets have become a favourite target of pro-Syrian and pro-Russian groups.

They have accused the group of supporting terrorists in Syria and doctoring footage of atrocities committed by regime forces – claims strongly denied by its supporters.

On Friday, the Russian Ministry of Foreign Affairs tweeted: ‘The White Helmets’ co-founder, James Le Mesurier, is a former agent of Britain’s MI6, who has been spotted all around the world, including in the Balkans and the MiddleEast.

‘His connections to terrorist groups were reported back during his mission in Kosovo.’

Who are Syria’s White Helmets?

Founded in 2013, the Syria Civil Defence, or White Helmets, is a network of first responders that rescues the wounded in the aftermath of air strikes, shelling or explosions in rebel-held territory.

The White Helmets have rescued an estimated 100,000 civilians that were trapped under rubble or caught up in fighting in battered opposition-held zones along various fronts of Syria’s seven-year conflict.

Since its formation, when Syria’s conflict was nearing its third year, more than 252 of its volunteers have died and more than 500 have been wounded.

The group’s motto — ‘To save one life is to save all of humanity’ — is drawn from a verse in the Koran, although the White Helmets insist they treat all victims, regardless of religion. 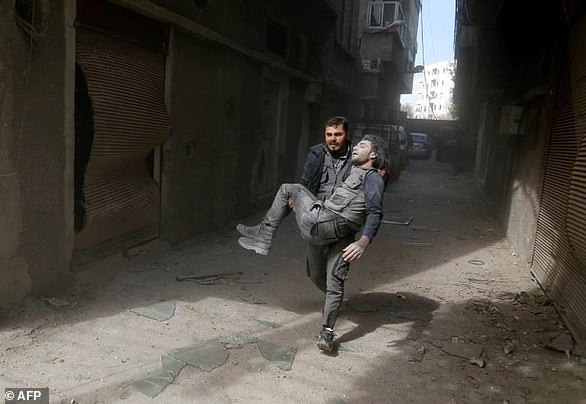 Some members have received training abroad, including in Turkey, returning to instruct colleagues on search-and-rescue techniques.

The group receives funding from a number of governments, including Britain, Germany and the United States, but also solicits individual donations to purchase equipment such as its signature hard hats.

A second film on the group, named ‘Last Men in Aleppo,’ was nominated for an Oscar in 2018.

Prince Harry snubs Intern Pete's AGAIN during after prank gone wrong
Shanina Shaik arrives at rehearsals for the Victoria's Secret Fashion Show
DOMINIC SANDBROOK: Brexit's two tribes and a real threat to civil unrest
Former escort Helen Wood recalls Wayne Rooney was 'close to crying' after they had sex
Heavy gunfire in Caracas after Venezuela's Juan Guaido called for uprising against Maduro
Prince Andrew will face fresh crisis as BBC's Panorama interview will air on December 2
TOWIE's Courtney Green appeals for help after ex Callum Bushby is slashed across the face
Losing your sense of smell or taste IS a symptom of coronavirus, UK officials admit