Bizarre dashcam has captured the moment a handcuffed man fell out the back of a moving police van and on to a main road.

The incident unfolded in front of shocked motorists at a busy intersection in west on Sunday afternoon.

Dashcam from a passing vehicle shows the man swinging open the police van’s back door while it was turning right at the intersection of Charles and Newcastle streets.

He then fell out and landed on the busy road where he continued to roll, despite being handcuffed throughout the entire ordeal.

The passing vehicle which captured the footage then drives out of the shot.

The footage was shared to the Dash Cam Car Owners Australia Facebook page, where it attracted more than 163,000 view and hundreds of shares and comments within hours.

‘Police forgot to lock the back door of there (sic) paddy wagon,’ the post read.

‘Unfortunately the dashcam didn’t captcha (sic) him running away and the police chasing him down the freeway.’ 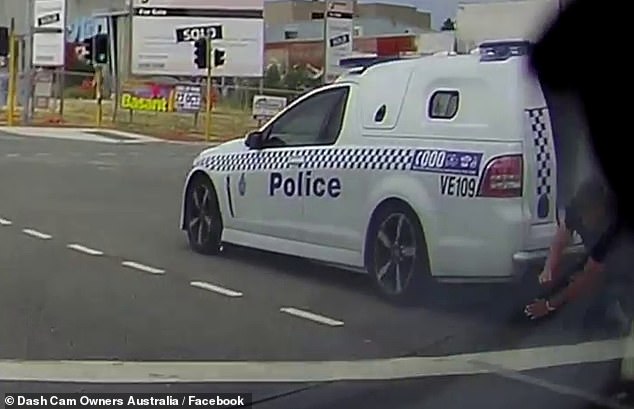 WA police minister Michelle Roberts hopes to get a update about the incident when she meets with Police Commissioner Chris Dawson later on Monday.

‘It is clearly very disturbing…I haven’t been fully briefed on it, clearly there will need to be an investigation,’ Ms Roberts told reporters.

‘It is a very serious matter…senior police will investigate.’

‘It’s obviously clearly important that prisoners are property secured and kept safe. I don’t know whether there’s any failure in the locking the van procedure or whether there’s a mechanical fault or what the situation is at this point.’

Queen Aretha's troubled soul: A mom by the age of 13 and married to a pimp at 19
Saturday's Major League Linescores
Explosion in Sri Lanka as soldiers engage in shoot-out during raid on 'suicide vest factory'
Opera House graphic designer charged with murdering his girlfriend after body found at their flat
US women's soccer team overpowers Thailand 13-0 for their largest EVER World Cup victory
Mother, 56, and daughter, 16, killed after tree falls onto their car in the Cotswolds
Pensioners share their delight as they are visited by puppies at Christmas
Children are found dead in a vehicle after being severely burned in an out-of-control blaze