The producer who was fired for ‘leaking’ ABC News anchor Amy Robach’s hot mic revelation that the network killed off her Jeffrey Epstein story has claimed she is innocent during an interview with Megyn Kelly.

DailyMail.com had revealed the former staffer in question is Ashley Bianco, 25, an Emmy-winning producer for CBS This Morning, who was fired on Thursday after the network was informed by her old employer ABC that she had ‘leaked’ the footage.

But Bianco tearfully told Kelly on Friday she had only saved the clip when she watched from her desk as Robach ranted about ABC killing her story back in August.

She said she had marked the footage in the company’s internal system to watch back later, admitting she ‘did it just for office gossip.’

Bianco claims after saving the clip she didn’t touch it afterwards, tearing up as she swore she didn’t leak the video and warned ABC the leaker was still inside the network.

Right before the interview dropped, Project Veritas, which first published the bombshell tape, released a statement from who they claim is the actual ABC whistleblower, backing up Bianco’s claims that she is innocent. 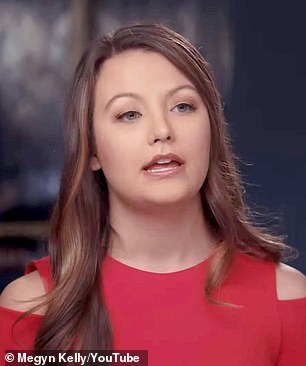 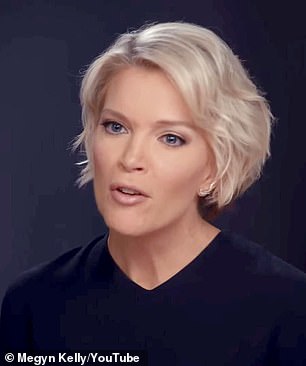 Fired producer Ashley Bianco claimed on Friday she did not leak the hot mic video of Amy Robach ranting about ABC killing off her Jeffrey Epstein story. Bianco admitted during her interview with Megyn Kelly that she had saved the clip to the network’s system back in August, but says she never touched it again 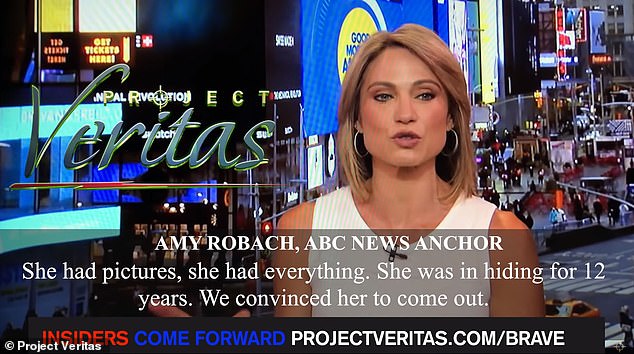 Bianco told Kelly she had worked as a crash producer for ABC for three years, editing clips together.

She said: ‘I was watching the comments while I was at my desk and I had seen what she was saying. I went to my manager and I was like, ”Do you see what she’s saying? Does she know she’s on a hot mic?”’

Robach’s assistant told Bianco that the anchorwoman knew she was on a mic and it was being broadcast to all the affiliates, so Bianco went back to her desk and clipped the video in the network’s system.

She said staffers often clipped footage of anchors off the air to put together funny videos to use later as behind-the-scenes clips.

Bianco said she didn’t tell her manager she had saved the hot mic moment.

She added: ‘This is something everyone saw. The whole day everyone was talking about it, running around, taking videos of it.’

Kelly asked Bianco point blank, ‘Did you leak the tape?’

‘I did not, Bianco replied.

She added she has never spoken James O’Keefe of Project Veritas, adding: ‘I didn’t even know who he was until this week… I’ve never communicated with anyone over there.’

‘It wasn’t me. ‘I’m not the whistleblower. I’m sorry to ABC but, the leaker is still inside. I never did any of that. I may have accessed it. But I never leaked it, I never showed it to anyone, I didn’t talk about the situation outside the company.’

‘I just want my career back. I just want people to know I didn’t do it,’ she concluded. 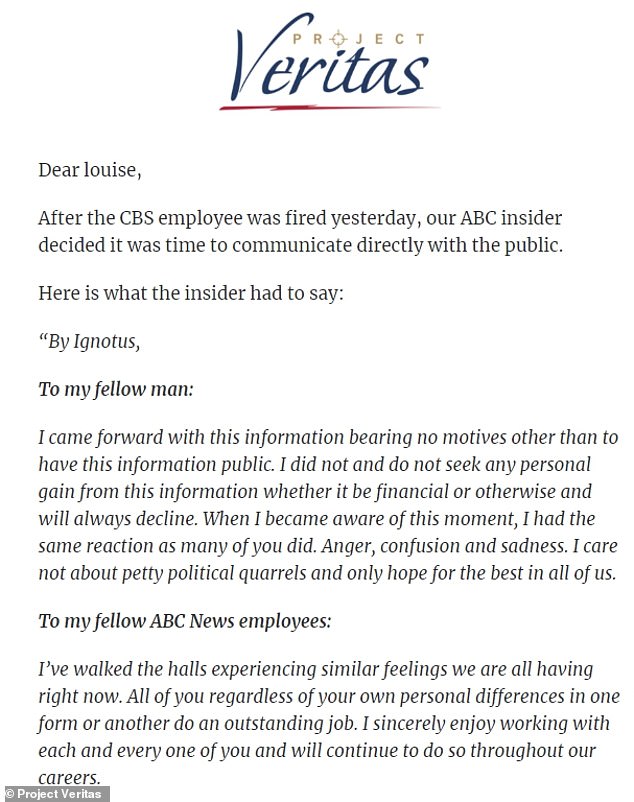 Right before the interview dropped Project Veritas, which first published the bombshell tape, released a statement from who they claim is the actual ABC whistleblower, who backed up Bianco’s claims that she is innocent

On Friday afternoon, Project Veritas, which first published the video of Robach, released a statement on behalf of an ABC insider, who they claim is actually the responsible person for leaking the video.

The ABC insider wrote: ‘It is terrible that you have been lashed out at by the company. I know some may put the burden of guilt on me, but my conscience is clear.

‘The actions of the company towards you are the result of their own and not anyone else. The public outcry, from coast to coast, of all people, creeds, and political affiliations, is clear.

‘I have not one doubt that there will always be support for you, and you will have prosperous careers. For neither you, nor I, have done anything wrong.’

The insider goes on to apologizes to Robach, saying she’s ‘the only person deserving of an apology. I am most certainly sorry.’

‘Not for my actions or for this to center around you, but for what is clear to have happened. When I first stumbled across this, my initial reaction was outrage. But this soon turned towards empathy.

‘I cannot imagine doing all the hard work to only have it shelved. If the past few years have taught us anything, it is the truth that some of us have endured many hardships in this industry. From the spiking of stories regarding prominent and powerful people in this world, and to yours.

‘I believe you are an outstanding reporter and have done such tremendous work in the community as well.’

‘I did not and do not seek any personal gain from this information whether it be financial or otherwise and will always decline. When I became aware of this moment, I had the same reaction as many of you did. Anger, confusion and sadness.

‘I care not about petty political quarrels and only hope for the best in all of us. ‘ 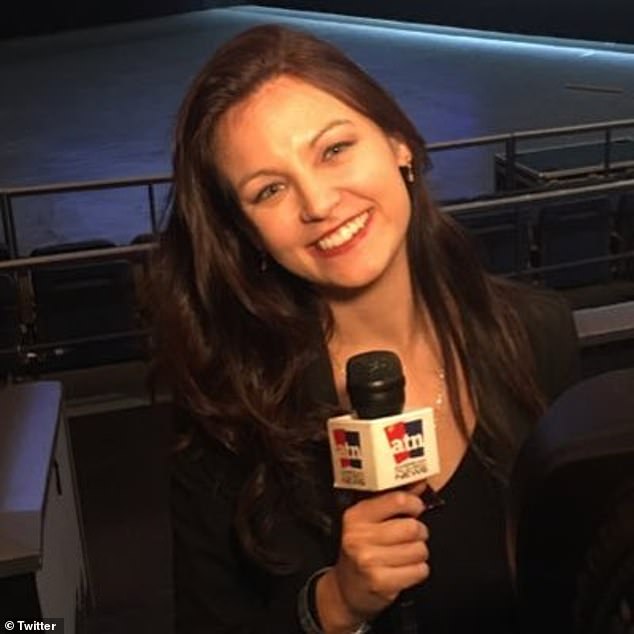 DailyMail.com can reveal the staffer is Ashley Bianco, an Emmy-winning producer, who contacted the former Fox News star directly in order to have her voice heard, a source said 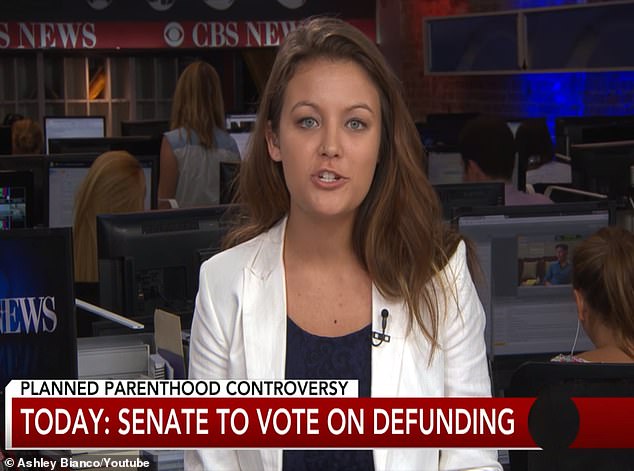 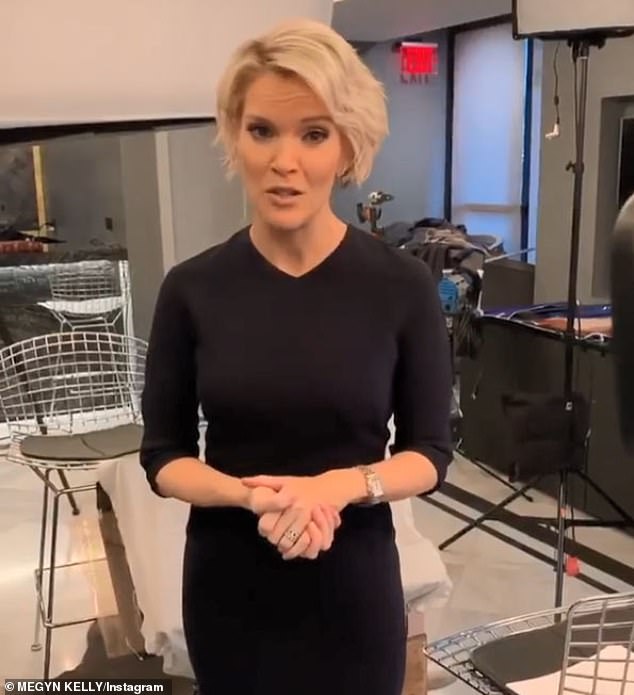 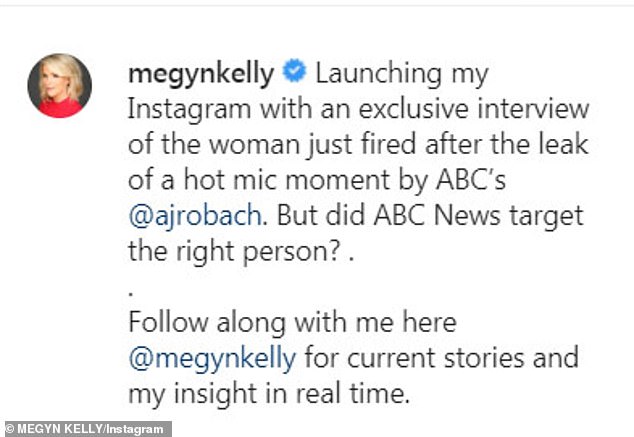 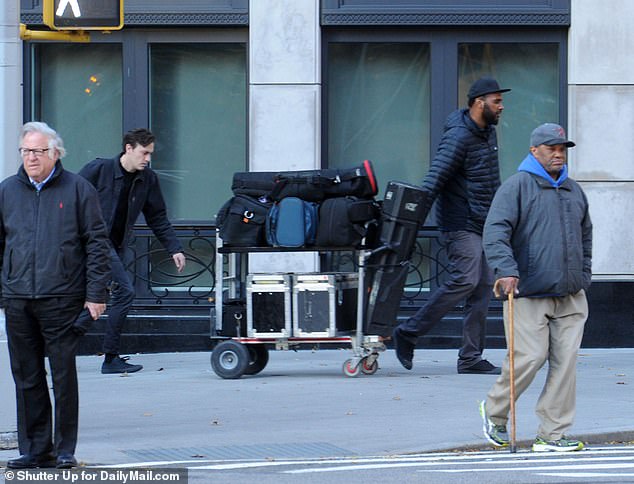 On Friday morning, a film crew was spotted leaving Kelly’s apartment and loading up their gear into a rental van

Early on Friday morning, Megyn Kelly had dramatically announced that she had interviewed  Bianco and teased that she would release the interview some point on Friday on her newly launched Instagram page and YouTube channel.

The interview will be Kelly’s first step in making her comeback since she parted ways with NBC where she had signed a $69 million deal.

Bianco attended Emory University and worked as a producer on Good Morning America at ABC for three years, according to public records and social media. Robach co-anchors the morning show.

When contacted for comment, Bianco hung up on DailyMail.com. Following her firing, Bianco has removed her social media.

The 46-year-old was referring to Jeffrey Epstein’s underage sex slave who accused the pedophile of lending her out for sex with his friends, including Prince Andrew.

Robach said ABC didn’t let the story go to air because the palace threatened to sue the network and there were concerns  and  would no longer grant ABC any interviews.

There has been a good deal of backlash against ABC ever since the video first emerged, with many people pointing out that none of the network’s news programs have mentioned the story.

CBS is also facing backlash for firing Bianco after ABC informed its counterparts at the network that Bianco was responsible for the leak and was now working for their news division, according to journalist Yashar Ali.

The hot mic video was also recorded just two months after ABC News president James Goldston was pictured dining with Prince Charles and President Trump at Winfield House during the administration’s state visit to London back in June.

Then-Prime Minister Theresa May and Sarah Huckabee Sanders were also seated at the same table as the three men. 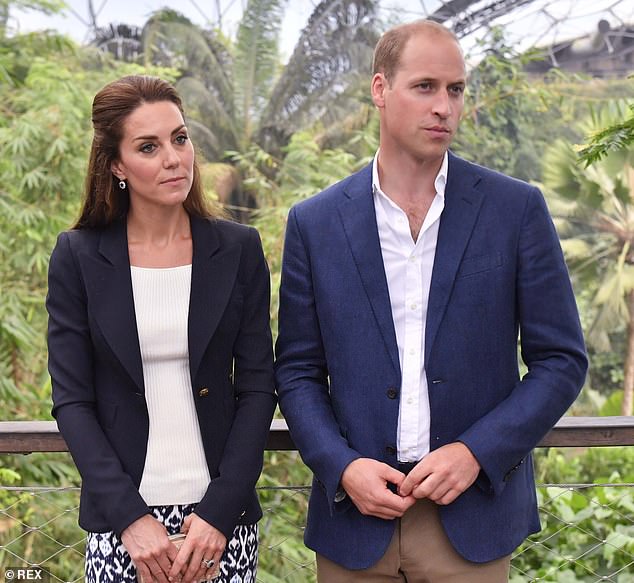 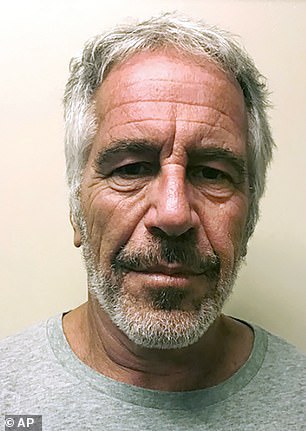 The footage of Robach was released on Tuesday, where she vented that ABC didn’t air her interview with Virginia Roberts, a sex slave of Jeffrey Epstein’s. Roberts has accused Epstein of lending her out for sex with his friends while she was underage, including to Prince Andrew

Robach is visibly frustrated in the video, as she details having filmed the interview with Roberts years before Epstein’s arrest.

‘I’ve had the story for three years. I’ve had this interview with Virginia Roberts. We would not put it on the air,’ says Robach at the start of the video.

‘First of all I was told, ‘Who’s Jeffrey Epstein? No one knows who that is this is, this is a stupid story.”

There were also legal issues too she reveals and concerns about possible backlash.

‘Then the palace found out that we had her whole allegations about Prince Andrew and threatened to sue us a million different ways,’ explains Robach.

‘We were so afraid we wouldn’t be able to interview Kate and Will, so I think that had also quashed the story.’

‘Then the palace found out that we had her whole allegations about Prince Andrew and threatened to sue us a million different ways,’ Robach explains.

‘We were so afraid we wouldn’t be able to interview Kate and Will, so I think that had also quashed the story.

‘And then Alan Dershowitz was also implicated because of the planes.’

Dershowitz, Epstein’s former lawyer, who flew on the so-called ‘Lolita Express’, according to flight logs. In legal documents Roberts claimed to have had sex with Dershowitz on the jet with another girl present. He has denied the claims.

A clearly frustrated Robach goes on to detail what the interview entailed at the time she was trying to get it on air.

‘It was unbelievable what we had. [Bill] Clinton. We had everything. I tried for three years to get it on to no avail.

‘And now it’s all coming out and it’s like these new revelations and I freaking had all of it. I I’m so pissed right now like every day I get more and more pissed cause I’m just like, oh my god, what we had was unreal.’

Robach also said that at the time, one of the attorneys for the victims said: ‘There will come a time when we will realize Jeffrey Epstein was the most prolific  pedophile this country has ever known.’ She then adds: ‘And I had it all three years ago.’ 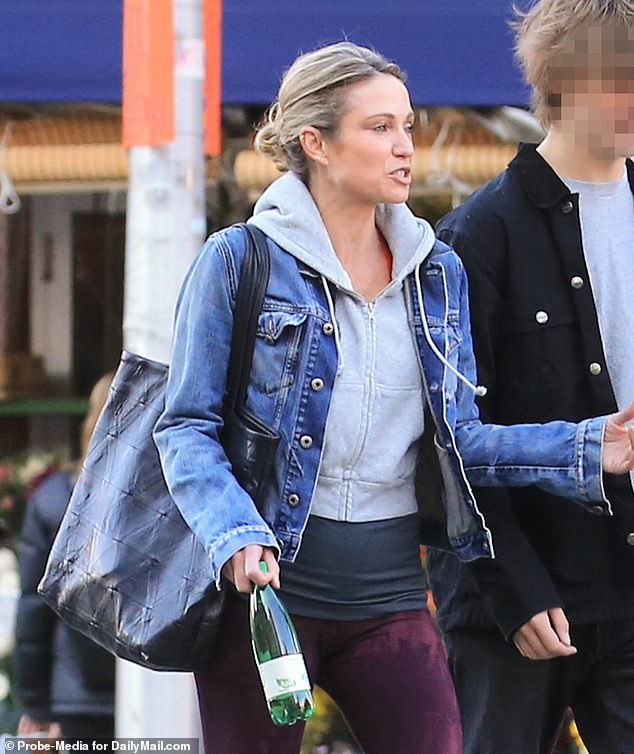 Amy Robach was spotted skipping work on Wednesday, heading to the gym to blow off some steam instead, following her explosive hot mic revelation where she said ABC shut down her Jeffrey Epstein story, exclusive DailyMail.com photos show

Robach was speaking in the wake of Epstein’s death, which she gave her opinion about as well while speaking to her producer.

She notes that Epstein ‘made his whole living blackmailing people,’ before stating: ‘There were a lot of men in those planes. A lot of men who visited that Island, a lot of powerful men who came into that apartment.’

There is then a call for other members of the media to share any video or recordings they might have that shows outlets choosing not to run stories about Epstein.

‘Project Veritas intends to continue its investigation into corruption in the Mainstream Media,’ the non-profit activist group stated.

‘We encourage that Brave insiders at these organizations come forward with any information they have, so that the public knows what is really going on within these media companies.’

‘As a journalist, as the Epstein story continued to unfold last summer, I was caught in a private moment of frustration. I was upset that an important interview I had conducted with Virginia Roberts didn’t air because we could not obtain sufficient corroborating evidence to meet ABC’s editorial standards about her allegations,’ said Robach in a statement after the release of the video.

‘My comments about Prince Andrew and her allegation that she had seen Bill Clinton on Epstein’s private island were in reference to what Virginia Roberts said in that interview in 2015. I was referencing her allegations – not what ABC News had verified through our reporting.’

She then added: ‘The interview itself, while I was disappointed it didn’t air, didn’t meet our standards. In the years since no one ever told me or the team to stop reporting on Jeffrey Epstein, and we have continued to aggressively pursue this important story.’

The Duke of York has vehemently denied Roberts’ allegations, which were struck from the record by a judge in legal proceedings in 2015 as being ‘immaterial and impertinent’.

A Buckingham Palace spokesperson said this is a matter for ABC.