A jilted father who hanged his four children after being served with divorce papers by his wife has been sentenced to life behind bars in .

Sibusiso Mpungose, 44, killed three children at the marital home in Durban and another one in nearby woods before trying to kill himself.

His wife Xolisile returned home to the horrifying sight and told a court that she felt her life had ‘ended the day my children were killed’.

‘Even today I cannot go back to my house because I cannot wash away the terrible pictures I have in my mind all the time. I am haunted by the cries of my children because I could not save them,’ she said in a victim impact statement. 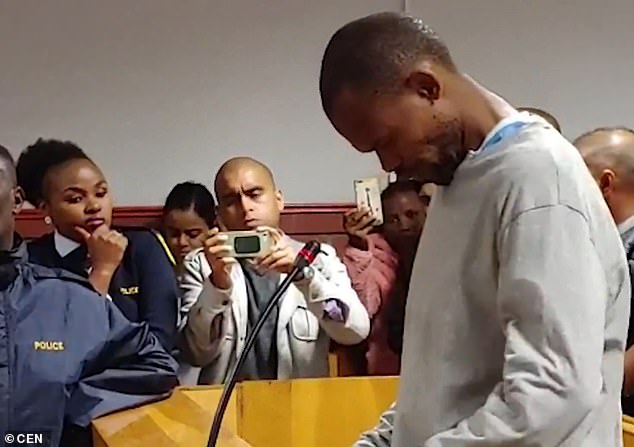 Killer: Sibusiso Mpungose, 44, is pictured in court where he was handed four life sentences for the murders of his three children and stepdaughter in South Africa 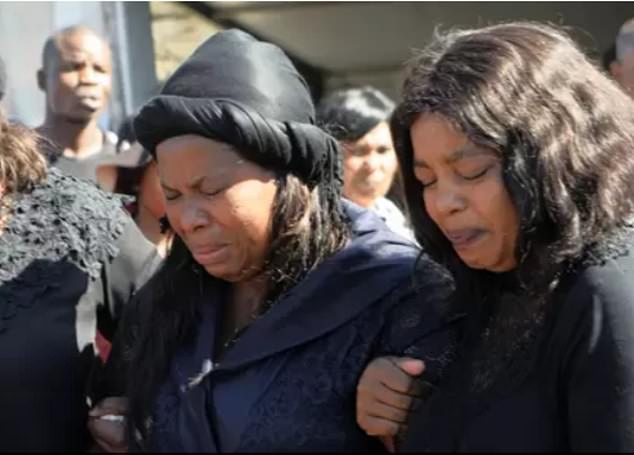 Mourning: The children’s mother Xolisile (left) returned home to the horrifying sight and told a court that she felt her life had ‘ended the day my children were killed’

Mpungose had picked up his three youngest children from a nearby creche and school after his teacher wife, 42, had gone to work.

After taking them back to the marital home, which he had been asked to leave, he hanged his youngest son Kuhlekonke, four, and daughter Khwezi, six, in their school uniforms.

When his 10-year-old son Siphesihle returned home, he was hanged with his own clothes before Mpungose went to collect his stepdaughter from another school.

Ayakha Jiyane, his wife’s daughter from a previous relationship, was led into nearby woods and hanged there.

Mpungose then bought himself alcohol to get drunk and attempt to kill himself. 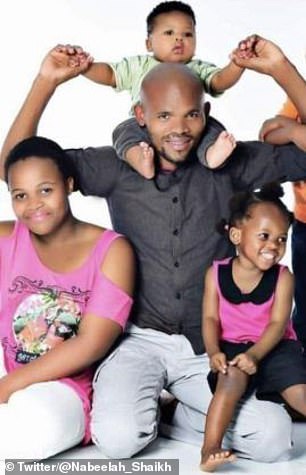 The children’s mother became suspicious after she saw unusual behaviour on her taxi app, which showed her husband travelling between the schools of their four children and their home in Durban.

She excused herself from school and reported her fears at the local police station, prompting a team of armed officers to race to the family home.

They broke into the house after discovering that the door locks had been changed.

When they got inside, they found the three children dead and after a search the fourth was discovered in the woods nearby.

Mpungose was arrested the following day in another part of Durban in the process of trying to kill himself.

Once arrested, he admitted to murdering the four children in cold blood.

He claimed he believed his wife of 11 years years was leaving him to return to the father of her first child after finding messages between them on her phone.

Xolisile said she could not attend the sentencing hearing due to her grief, and said in a victim impact statement read to the court: ‘I cannot beat from my mind the pictures he left me seeing of my children hanging.

‘Even today I cannot go back to my house because I cannot wash away the terrible pictures I have in my mind all the time. I am haunted by the cries of my children because I could not save them.

‘I feel my life ended the day my children were killed’ she said. 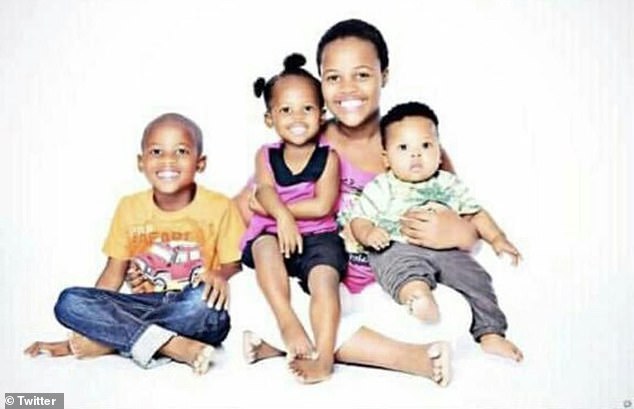 The killer took his son Kuhlekonke, 4, (right) daughter Khwezi, 6, (second left) and son Sphesihile, 10, (far left) back to the marital home, then killed his stepdaughter Ayakha Jiyane (second right) in nearby woods

Judge Sharmaine Balton handed down four life sentences to Mpungose at Pietermaritzburg High Court and said: ‘Your actions that day towards your children were horrendous and inhumane.

‘Based on the evidence from the autopsy alone I can only imagine what must have gone through the minds of these vulnerable children when you committed these heinous crimes against them.

‘These innocent children would have no reason to expect anything untoward when you picked them up from school and you did these horrendous acts to spite your wife. You were their father.

‘You did it because you suspected she was having an extra-marital affair and you could not accept her denial of your suspicions and the fact she regarded the marriage to you was over.

‘You instead used the children as pawns in this feud with you wife and this is inhumane and exceptionally aggravating against you especially as three were your own flesh and blood.

‘There are no words to adequately describe your actions,’ she said.

The judge added that the crime scene photographs of the dead children were ‘horrendous’.

Police spokesperson Colonel Thembeka Mbhele said at the time of his arrest: ‘It was a horrible scene for my officers to be confronted with and we soon arrested the father for four terrible murders.’

Kavanaugh accuser to be investigated after confessing to making up rape claims
Embattled May faces bid kill off her Brexit deal within WEEKS
Northern England wakes up to snow and sleet as 65mph gales batter the UK
'Fakeaway ' diet dishes so tasty you'll pinch yourself!
Ant McPartlin and Anne-Marie Corbett appear in high spirits as they leave Britain's Got Talent final
Brexit deal is 'within sight' as talks stretch into the night
Will Dame Karen Pierce become Britain's next Ambassador to the US?
How report into the Christine Keeler affair covered up a FAR more sensational sex scandal