Ivanka Trump kicked off her trip to Morocco in royal fashion, sitting down to enjoy tea with Princess Lalla Meryem, who greeted the first daughter off the plane as she landed in Rabat.

The 38-year-old looked fresh-faced and relaxed, despite a long overnight flight from Washington, D.C. – during which she even managed an outfit change.

She stepped onto the tarmac to meet the princess wearing a chic gray embroidered suit jacket with coordinating pants and a pair of matching high heels, having left chilly D.C. in a long burgundy and tan trench coat, and a dark turtleneck. 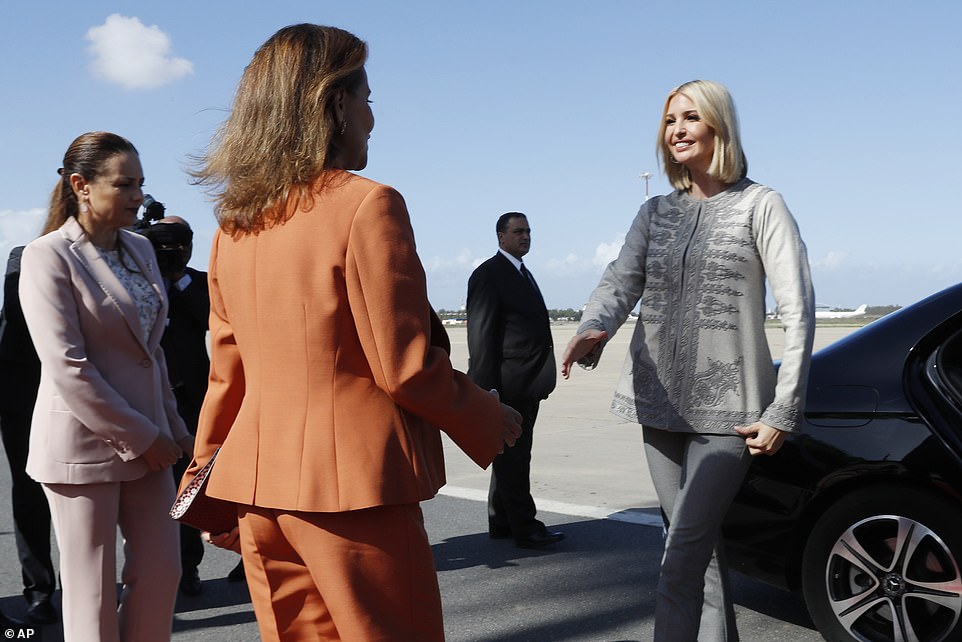 Welcome! Ivanka Trump was greeted by Princess Lalla Meryem of Morocco as she landed in Rabat on Wednesday morning 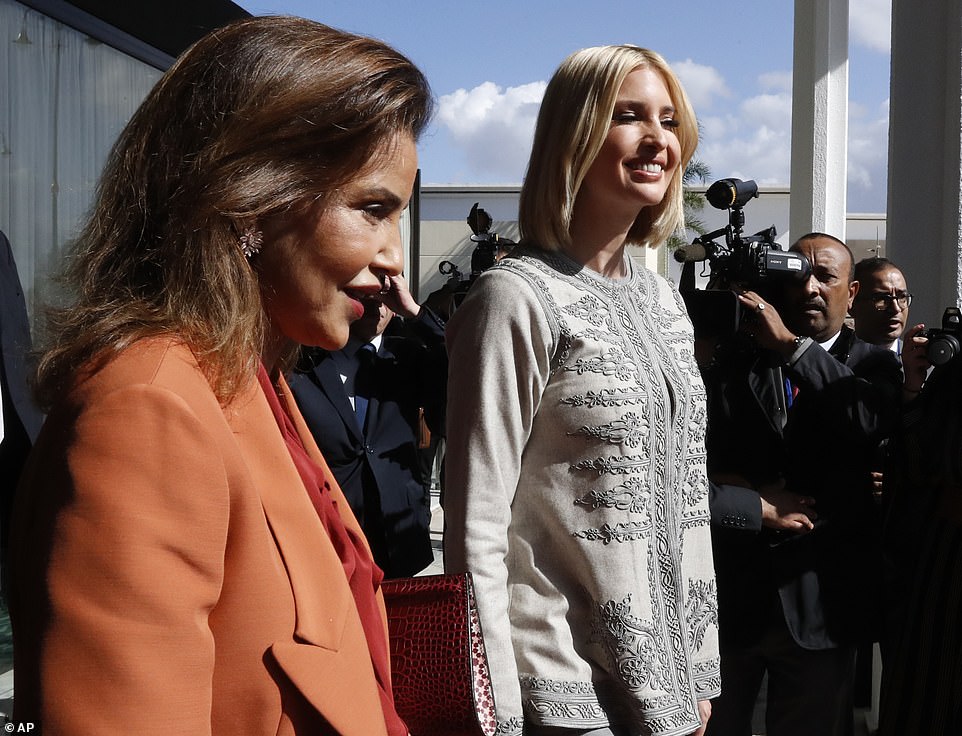 Chic show: Both women wore suits for the occasion, with Ivanka, 38, donning a traditional embroidered gray jacket, while the princess modeled a more vibrant orange design over a bright red shirt 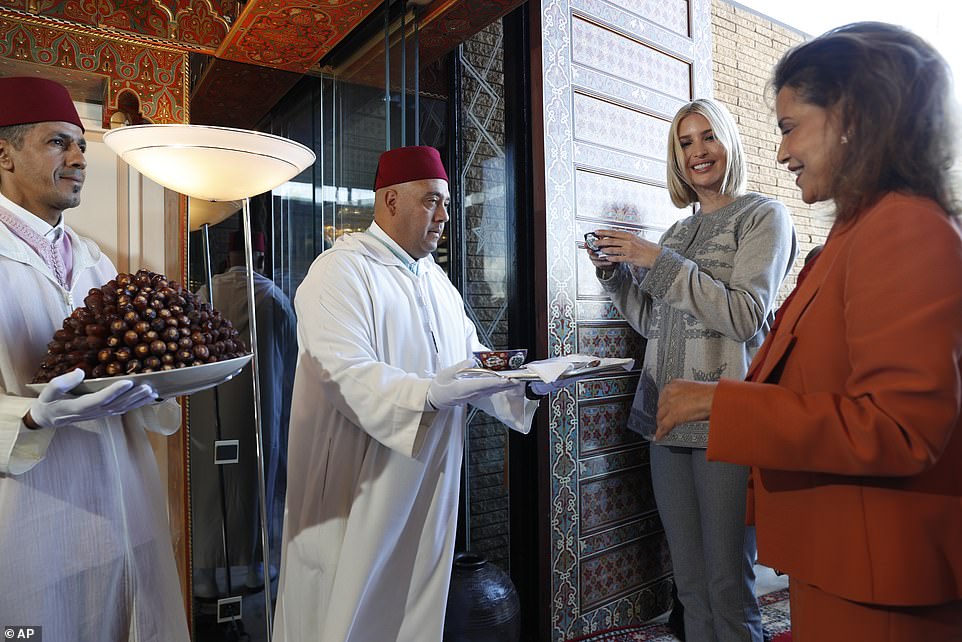 Tradition: Ivanka and Princess Meryem were presented with milk and dates upon their arrival. The dishes are traditionally served as a welcome snack, and are often offered at celebratory events, including weddings 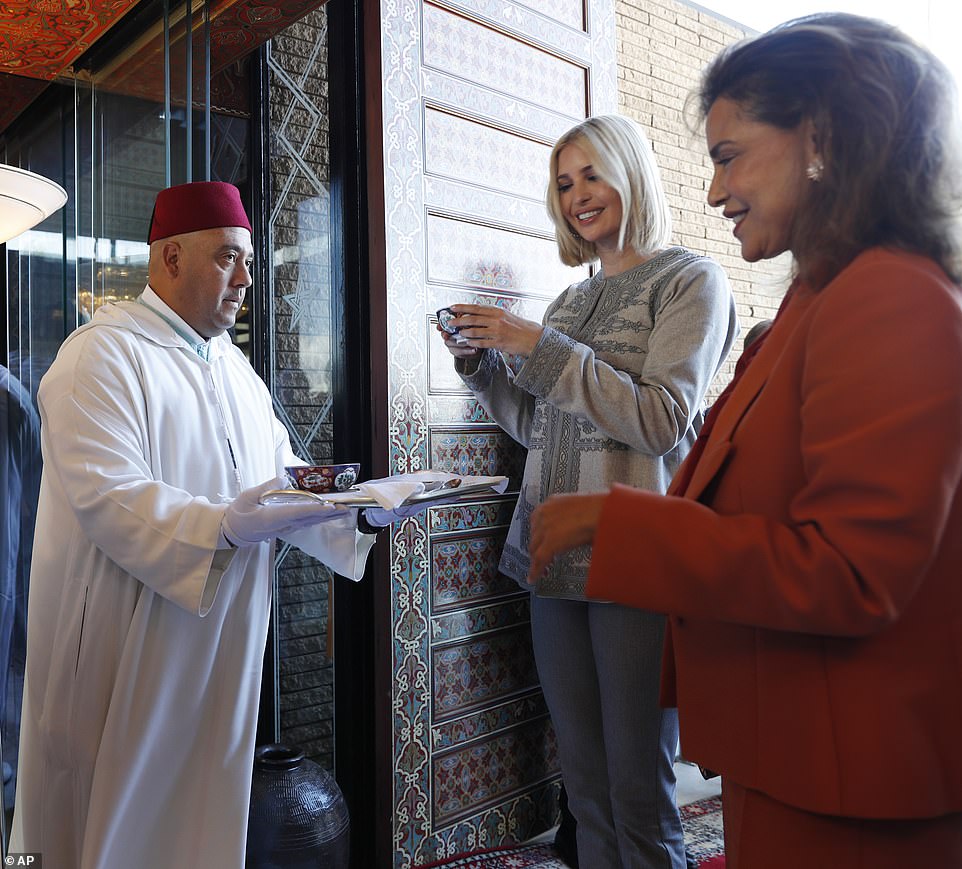 Drink up! The milk was presented in ornate bowls and saucers

Clearly thrilled with the warmer weather in Rabat, Ivanka beamed happily as she stepped out of a black car that appears to have transported her from the plane to the terminal, where Princess Meryem was waiting to meet her.

After a warm welcome at the airport, Ivanka was taken to enjoy a traditional Moroccan tea.

Both she and Princess Meryem were presented with milk and dates, which are often served in the country as a welcome snack, as well as at celebrations and parties.

They then sat down to enjoy tea together – during which Ivanka no doubt took the opportunity to discuss her global women’s empowerment program, the Women’s Global Development and Prosperity Initiative, which she will be promoting throughout her visit to the country.

Images show the two women chatting happily together while sitting in front of a lavish spread that included traditional Moroccan mint tea, and small silver trays of tasty treats.

Princess Meryem looked incredibly chic in an orange trouser suit, which she paired with a bright red blouse and a pair of simple black heels. 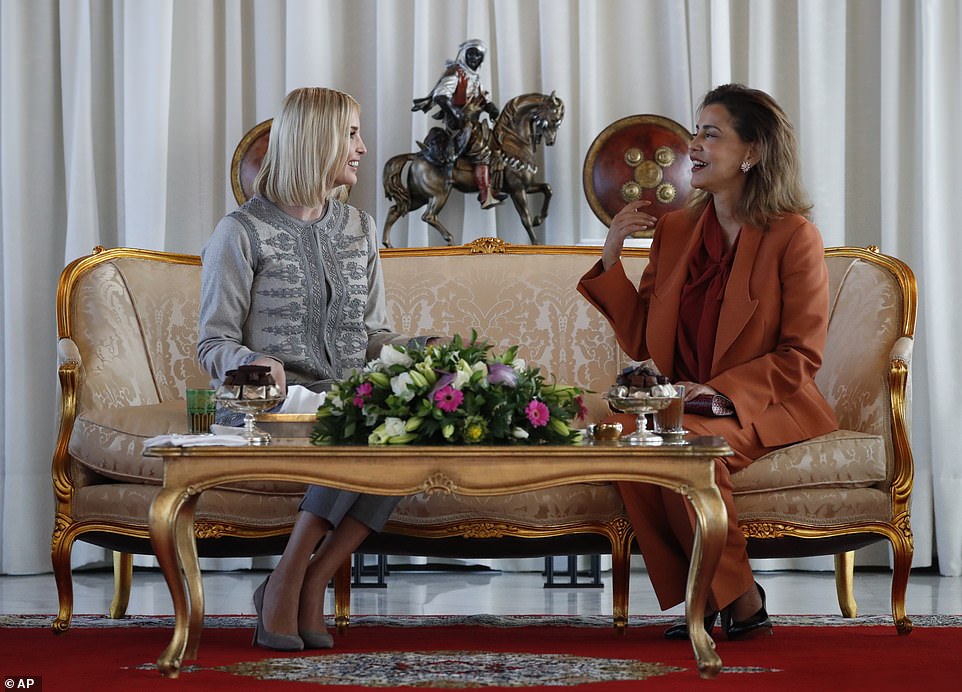 Discussion: The two women then sat down to enjoy tea together, with each sitting next to a silver tray of dates 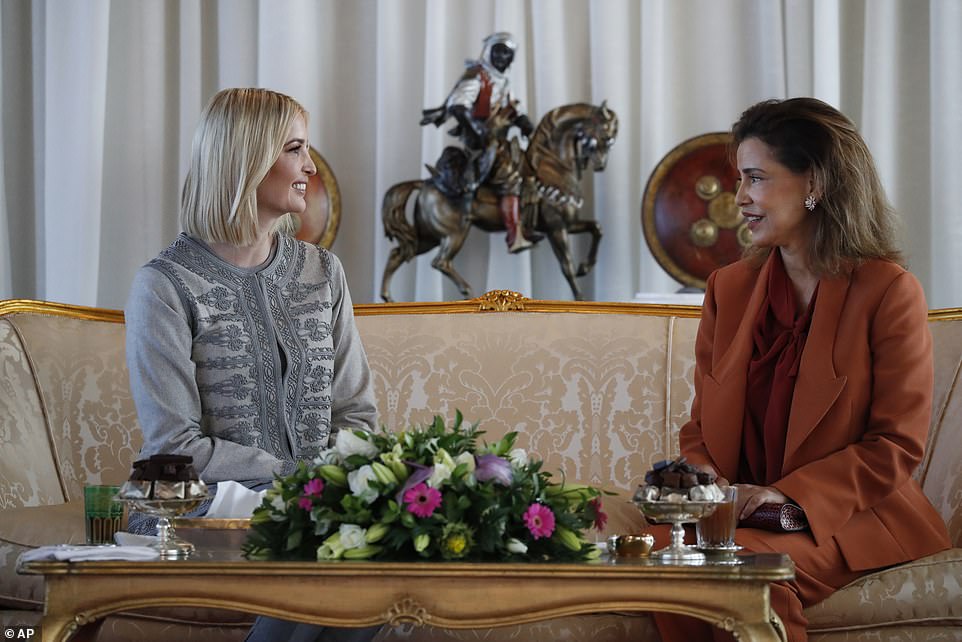 In-depth: It is likely that Ivanka took the chance to discuss her Women’s Global Development and Prosperity Initiative, which she will be promoting throughout her three-day trip 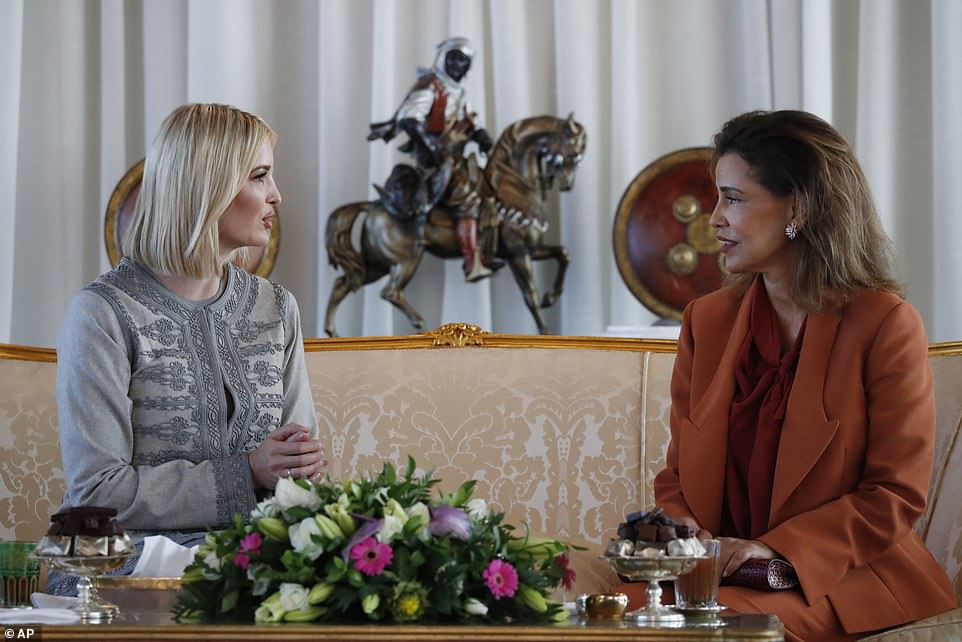 Companion: Ivanka has also been joined on the trip by Millennium Challenge Corporation (MCC) CEO Sean Cairncross, who will join the White House advisor in meeting with government officials and senior women business leaders 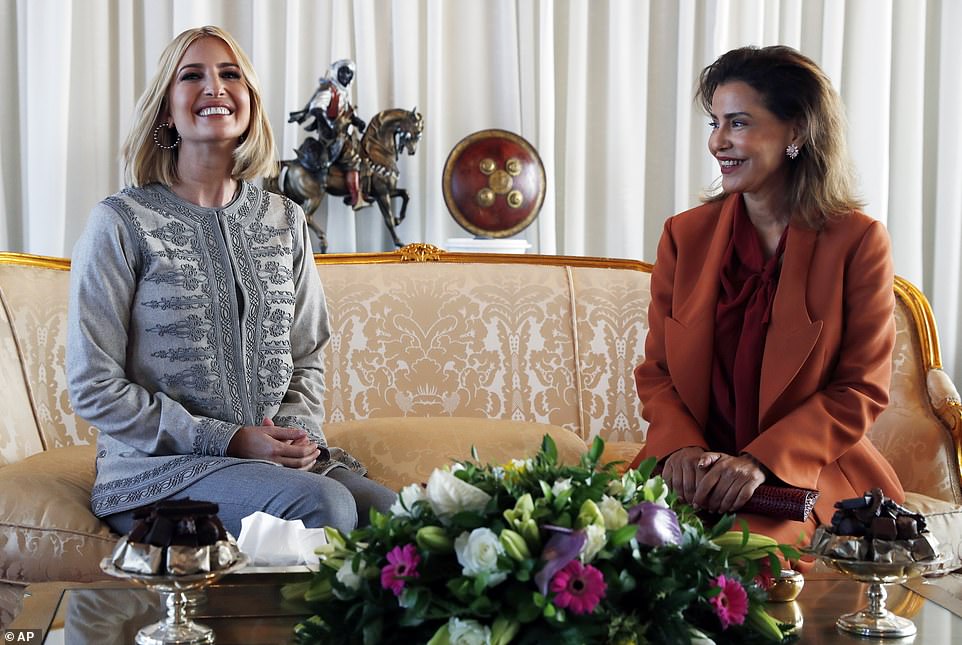 Getting along famously: Both women were pictured laughing and smiling during their conversation

As well as Rabat, Ivanka is also due to visit Casablanca during the quick trip, on which she has been joined by Millennium Challenge Corporation (MCC) CEO Sean Cairncross, who will join the White House advisor in meeting with government officials and senior women business leaders.

MCC is an independent US foreign aid agency that provides grants to developing countries to help promote economic growth, reduce poverty and strengthen institutions, and Mr Cairncross will take part in discussions that focus on how Morocco can continue to help women gain economic independence.

They are due to return to D.C. on November 8.

The visit to Morocco is the third overseas trip that Ivanka has taken this year to promote the Women’s Global Development and Prosperity Initiative, which was launched in February to benefit women in developing countries.

In a statement to AP, Ivanka said the kingdom of Morocco is a valued US ally that has ‘taken strides’ under King Mohammed VI to promote gender equality. 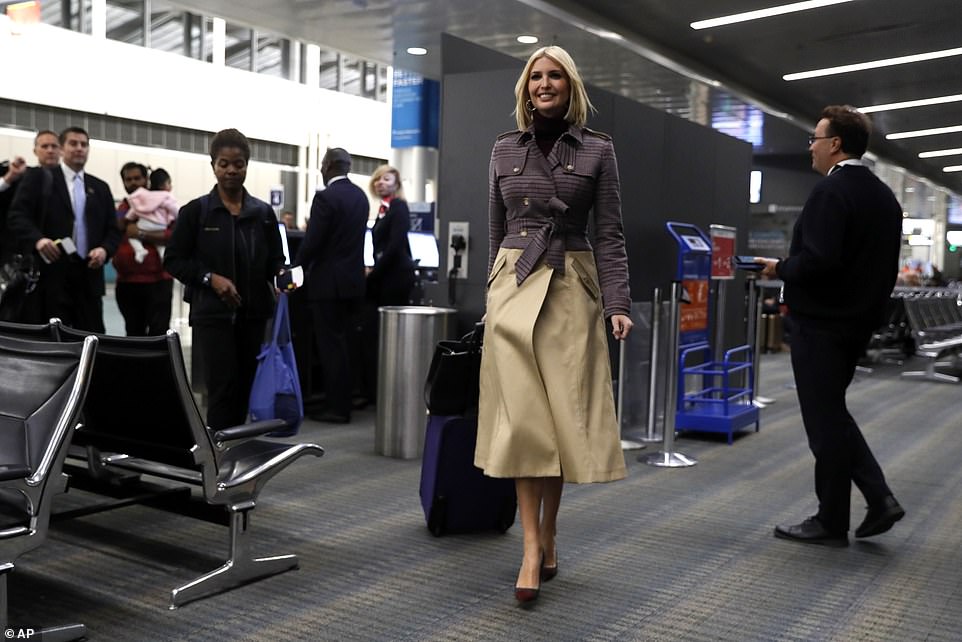 Off she goes! Ivanka was pictured at Dulles airport on Tuesday evening wheeling her own suitcase through the terminal 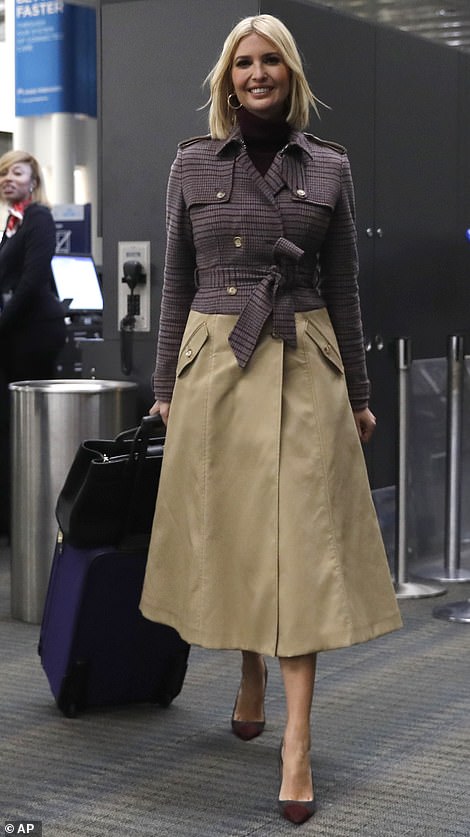 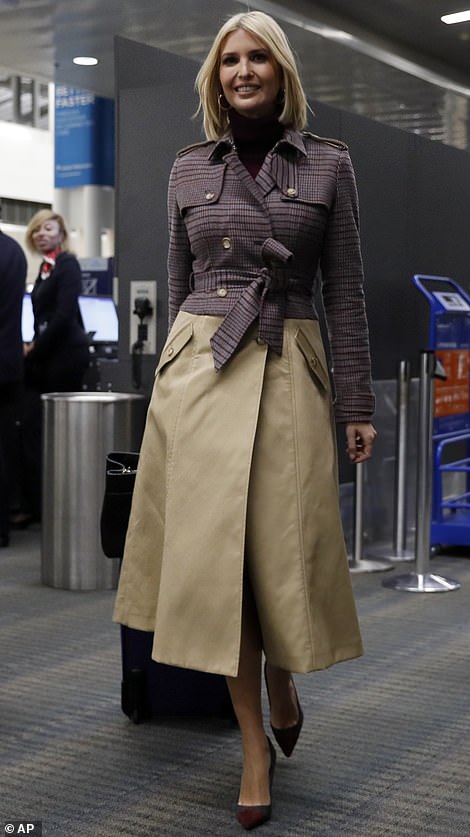 Chic: She wore a $2,380 Gabriela Hearst trench coat for the trip, before changing during the flight

In August, she tweeted her support to the Moroccan government after it began the process of amending its inheritance laws, which currently say women should receive half as much as men.

The Women’s Global Development and Prosperity Initiative has a goal of helping 50 million women in developing nations advance economically over the next six years.

It is a US government-wide effort that involves the State Department, the National Security Council and other agencies. It aims to coordinate existing programs and develop new ones to help women in areas such as job training, financial support and legal or regulatory reforms.

Ivanka traveled to Ethiopia and Ivory Coast, in sub-Saharan Africa, in April and to Argentina, Colombia and Paraguay in September to promote the initiative.

She was pictured walking through Dulles airport on Tuesday evening looking chic in a $2,380 trench coat from Gabriela Hearst, while wheeling her own suitcase behind her; it is not known whether the first daughter flew on a private plane, or on a commercial flight.