Surrounded by fire and smoke, this man battled valiantly against a huge blaze which erupted in today – despite being armed with only a bucket of water.

Standing on a rooftop, the man watched thick black smoke pouring from a five-storey building at a market in Lagos.

Footage taken today shows him heroically hurling water at the fire, refilling his bucket again and again despite the mismatch in scale.

At one stage he hoped for more luck with a larger bucket, but he could still only make a small splash. 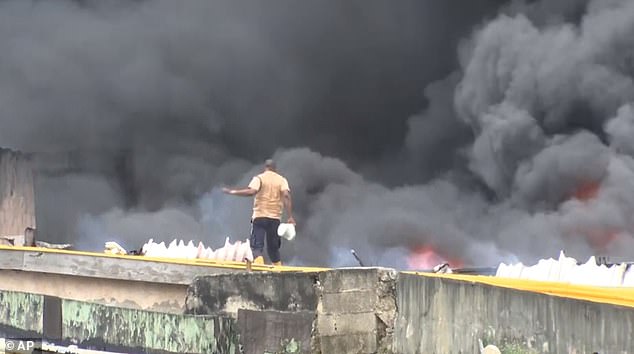 Mismatch: A man in Lagos stands on the roof of a five-storey building holding a bucket of water – using it to tackle the fire and smoke which is raging all around him 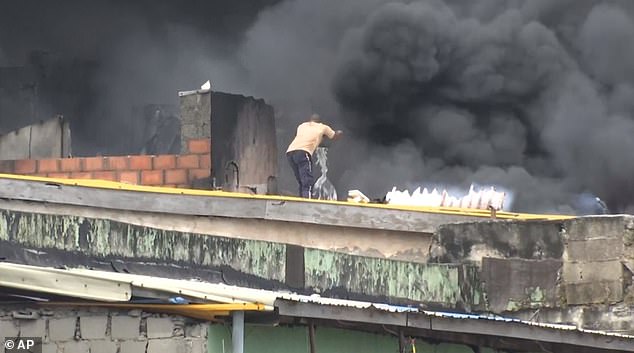 Valiant effort: The man pours water over a very small part of the fire as he battles the flames on the roof of a building in Lagos after the blaze broke out this morning

Wearing a shirt, tracksuit trousers and a pair of tall boots, the man did not seem intimidated by the dramatic flames.

It is unclear exactly what he was aiming at, but he flung his bucket repeatedly towards a small part of the fire after refilling it with water.

By the end of the clip, he had discarded the slightly larger bucket and walked in another direction with the smaller one in hand.

On the floor below him, one resident is seen throwing objects out of a top-floor window to keep them safe from the fire.

Another resident is seen emerging from a room to stand on the balcony and watch what is happening on the ground.

Firefighters said they were battling two simultaneous blazes at the Balogun market in central Lagos today. 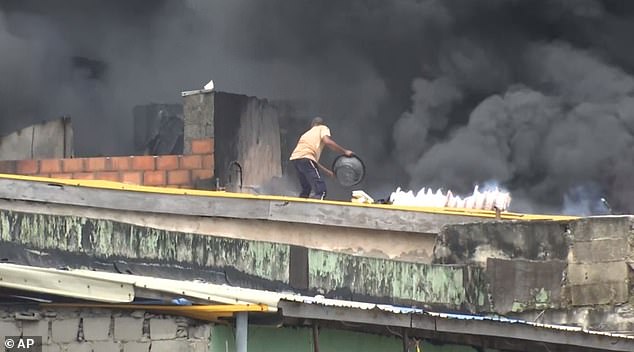 Upgrade: At one stage the amateur firefighter hoped for more luck with a larger bucket, but that too proved a blunt instrument against the fire and smoke 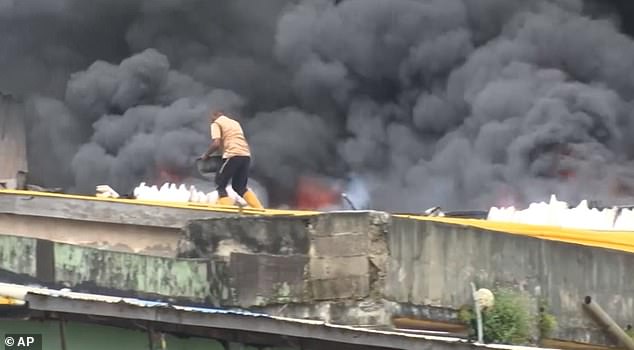 Heroic: Footage taken today shows the man repeatedly hurling water at the fire, refilling his bucket again and again despite the scale of the inferno

‘We have split our team in two to fight both fires,’ said Ganiyu Olayiwola, head of the Federal Fire Service in Lagos.

Officials have not yet revealed if anyone was injured in the blaze or commented on how it started this morning.

The Balogun market sprawls across many blocks on Lagos Island.

It is well known as one of the best places in Lagos to buy colourful Nigerian fabrics, clothing and shoes.

Fires and other disasters are frequent on Lagos Island where the Balogun market is located.

In March at least 20 people, most of them schoolchildren, died in the collapse of a three-storey building housing a school, residential apartments and shops.