A cruise ship’s swimming pool sent a torrent of water surging across its deck as the boat rocked in a vicious storm – but some passengers continued drinking their pints because ‘they’re on their jollies’.

Calum Lawson, a marine engineer who appears to work for Norwegian Cruise Line, posted footage on social media of some revellers screaming as others sat and enjoyed their beverages.

He dubbed those passengers ‘typical Brits’, who stayed put as water swirled around their feet. 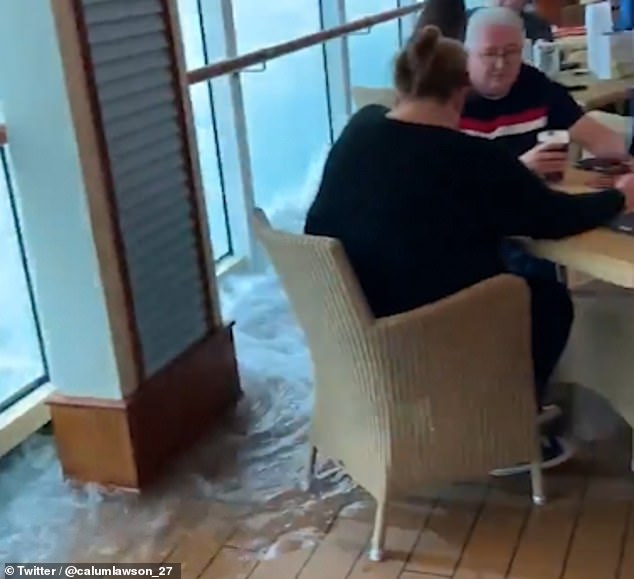 Some passengers on the cruise ship did not leave their seats as water spread across the deck. Calum Lawson dubbed these passengers ‘typical Brits’

In one video water races across the laminated deck, sending chairs flying and children scrambling to safety.

Mr Lawson pans across to the weather outside, which shows a choppy sea below as passengers cling to a railing near the window.

Another clip sees water from the swimming pool surge in huge waves over the edges on to the deck. 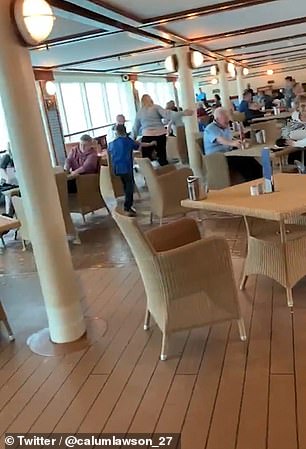 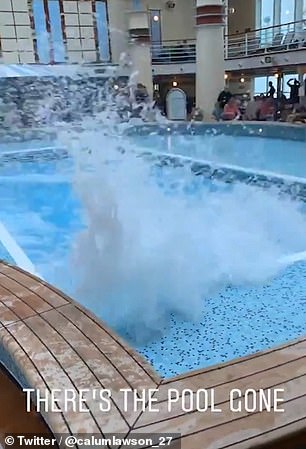 Mr Lawson, a marine engineer who appears to work for Norwegian Cruise Line, posted footage on social media of some revellers screaming as others sat and enjoyed their beverages (left). Right: The swimming pool overflows 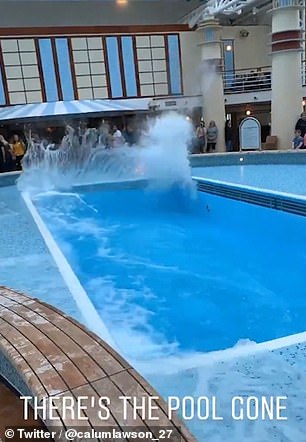 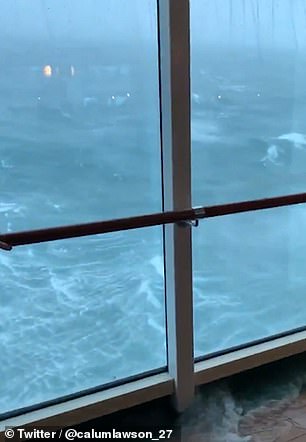 One clip shows water from the swimming pool surge in huge waves over the edges on to the deck (left), while outside the sea was choppy during the storm on November 3 (right)

It is not yet clear on which cruise ship the footage was taken, but some social media users speculated it was the P&O Ventura.

Mr Lawson captioned the first video on November 3: ‘Best part of this video is the amount of typical Brits so un-phased by any danger that occurs because ”they’re on their jollies” and nothing can spoil that… b****** ships flooding man.’

He added with the second: ‘Work on cruises ships they said… it’ll be fun they said. (1 storm later): There’s the pool gone.’

Were YOU on the ship?

His tweets got over 25,000 likes and 3,000 retweets, with some comparing the scene to the Titanic.

Others focused on the ‘Brits’ who ignored the water surge and sunk their pints.

One Twitter user said in reference to the Simon Pegg film Shaun Of The Dead: ‘Pint in hand, waiting for it to all blow over.’

A woman wrote: ‘Sitting tight and holding on to their beer.’ 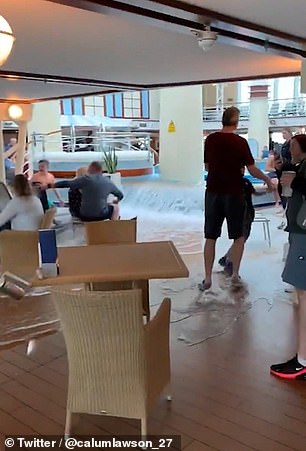 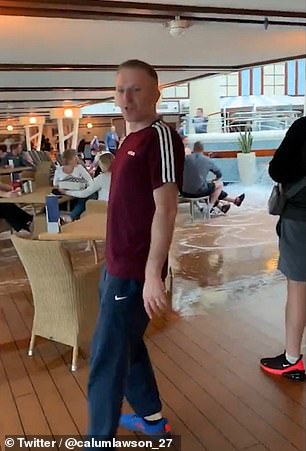 It is not yet clear on which cruise ship the footage (left and right) was taken, but some social media users speculated it was the P&O Ventura

And a man posted: ‘We would just put our feet up. We’d get another round of drinks haha.’

A woman asked ‘why is no one freaking out?, while another said: ‘This has to be an at sea day lol! If they were in the bar on a high stool this would not be a problem, Gin and tonic please bar keep!!’

P&O and Norwegian Cruise Line have been contacted for comment.

So why IS The Bachelor's Nick Cummins referred to as 'The Honey Badger'?
Brits flog their unwanted Christmas presents on eBay
Prince Philip grows prized black truffles at Sandringham
European Commission's Jean-Claude Juncker said Trump will refrain from imposing higher car tariffs
Labour peer pays tribute to British doctor killed alongside her husband in Sri Lanka atrocity
Duchess of Cornwall greets a one-year-old baby at the medals parade of the 4th Battalion The Rifles
BMW driver tries to BLOW OUT flames engulfing his car before it explodes in a fireball
Betting websites face losing their licence if they decline to sign up to GamStop