urged House Speaker Nancy Pelosi to go tend to her ‘hell’-ish San Francisco district instead of spending time trying to impeach him.

‘I think Nancy Pelosi has lost her mind and I think, frankly, that she should go back home to San Francisco,’ Trump told reporters outside the White House Sunday.

Trump pointed to Pelosi’s city’s homeless problem and tied her to ‘s roaring wildfires, which he blamed earlier Sunday on California Gov. Gavin Newsom, another Democrat. 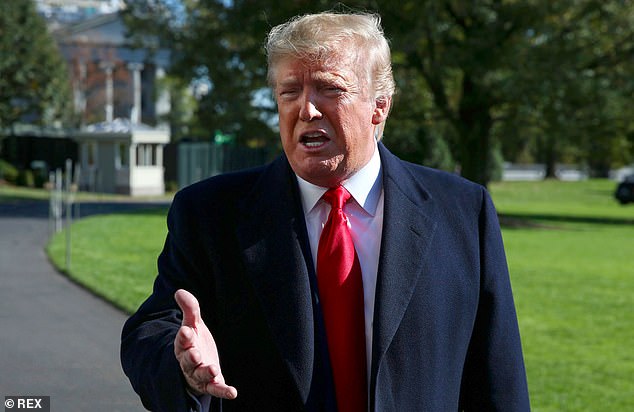 President Trump said Sunday that he thought House Speaker Nancy Pelosi had ‘lost her mind’ and needed to go back to San Francisco to clean up her district, instead of spending her time working to impeach him 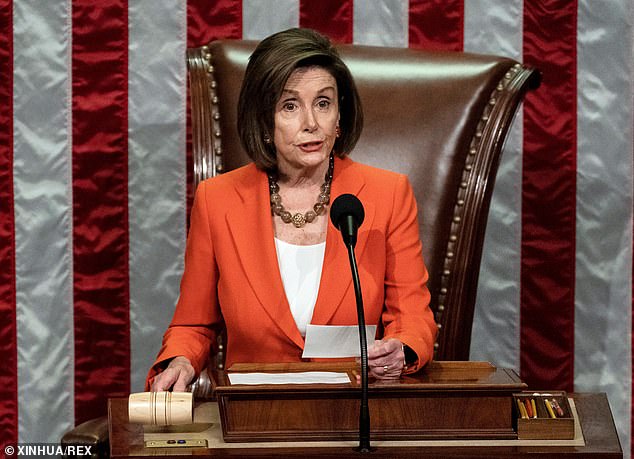 President Trump slammed House Speaker Nancy Pelosi outside the White House Sunday, saying she should go back to her district to help improve the homeless situation. He also looped her in as he blamed Gov. Gavin Newsom for the wildfires

In another tweet dashed off Sunday afternoon, President Trump also roped in ‘Corrupt Adam’ Schiff, the chairman of the House Intelligence Committee. Both Schiff and Pelosi are Democrats from California

During that bevy of tweets he threatened to withhold federal funding from the state.

Several hours later, he continued going after the state’s most prominent Democrats.

‘If you look at what’s happening to her district, her district is going to hell with homeless that they’re not taking care of, with needles all over the street, with tents, with people, with sanitation, with horrible things being washed into the ocean, the Pacific Ocean,’ Trump said of Pelosi.

He added that he thought her San Francisco district ‘has probably gone down more than any district, proportionally, in the United States.’

‘And then on top of it, you’ve got fires eating away at California every year because management is so bad,’ Trump continued.

‘The governor doesn’t know, he’s like a child,’ the president added, taking a swipe at Newsom, who was previously married to the girlfriend of Trump’s eldest son, Donald Trump Jr.

In a tweet, Trump also roped in Rep. Adam Schiff, the chairman of the House Intelligence Committee, which is currently leading the impeachment inquiry.

‘The Democrats are Fixers, and they are working overtime to FIX the Impeachment “Process” in order to hurt the Republican Party and me,’ Trump wrote. ‘Nancy Pelosi should instead Fix her broken District and Corrupt Adam should clean up & manage the California forests which are always burning!’ he said, referencing Schiff.

The president pointed out that it’s ‘always California’ when it comes to having large scale wildfires.

‘But Nancy Pelosi ought to go back to her district and take care of it because her district has become a mess,’ Trump said.

He blamed this on Pelosi being too busy trying to impeach him.

‘All she thinks about is impeachment, but she doesn’t want to impeach. You know who wants to impeach? The people that run the party, the radical left,’ Trump continued.

Since taking back the House in January, Pelosi pumped the brakes on impeachment as members to her left, such as New York City Democratic Rep. Alexandria Ocasio-Cortez, tried to hit the gas.

It took the president’s call with Ukranian President Volodymyr Zelensky and the alleged ‘quid pro quo’ – Trump holding up military aid to the country in exchange for an investigation into his political rival, former Vice President Joe Biden, and his son Hunter, for Pelosi to come around.

Since then, House members have been interviewing witnesses behind closed doors.

On Thursday the House voted – mainly along party lines – to officially open an impeachment inquiry, in which some of the committee’s work will come into public view.

Beyond holding new public Congressional hearings, Rep. Jackie Speier, also a California Democrat, said Sunday on CBS’ ‘Face the Nation’ the the American public would likely see the transcripts of lawmakers’ depositions before next weekend.

‘I think you’re going to see all of the transcripts that are going to be released probably within the next five days,’ said Speier, who sits on the Intelligence Committee.

Democrats are also hoping to get Trump’s ex-national security adviser John Bolton to testify, needing to issue a subpoena in order to compel him, as his lawyer already said that he wouldn’t do it willingly.

Asked about that Sunday, Trump said it was Bolton’s choice.

Red Dead Redemption 2 maker sells 17million games in its first two weeks
Orange is the New Black star Yael Stone says she struggled with working with Geoffrey Rush
Soldier accused of killing Afghani wants the case dropped because of investigator's 'stolen valor'
Syrian girl, nine, begs world leaders to end the conflict so she and other refugees can go home
New York condo owner is busted for converting ONE apartment building into nine illegal units
Cannabis smokers may be two-and-a-half times more likely to suffer a stroke
Fisherman is left gobsmacked after hauling a freaky three-legged creature from the Atlantic Ocean
RHOBH: Denise Richards storms off in tense confrontation with her co-stars