President  appeared to shift strategy from his staunch denial of quid pro quo during his July call with Ukrainian president Volodymyr Zelensky, tweeting Sunday that there ‘is nothing wrong’ with quid pro quo and it is ‘not an impeachable event’.

‘False stories are being reported that a few Republican Senators are saying that President Trump may have done a quid pro quo, but it doesn’t matter, there is nothing wrong with that, it is not an impeachable event,’ he wrote. ‘Perhaps so, but read the transcript, there is no quid pro quo!’

His comments echoed counselor Kellyanne Conway earlier in the day as she refused to comment on whether Trump’s ask on his call with President Zelensky was appropriate, but she noted, ‘It’s not impeachable.’

President Trump took to Twitter Sunday night to say there ‘is nothing wrong with’ a quid pro quo, calling it ‘not an impeachable event’ 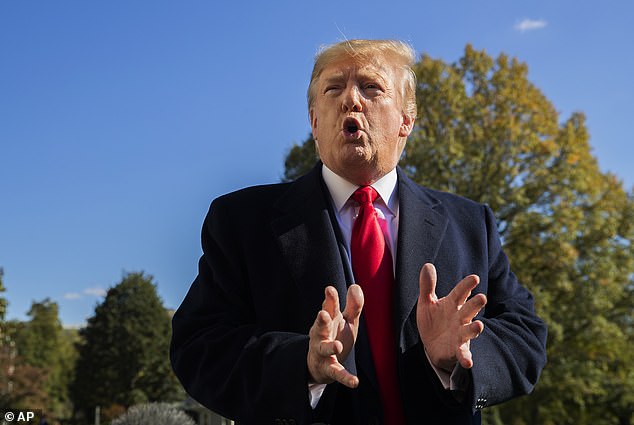 Trump then backed up his defense of his phone call with the Ukrainian president, writing: ‘Perhaps so, but read the transcript, there is no quid pro quo!’ 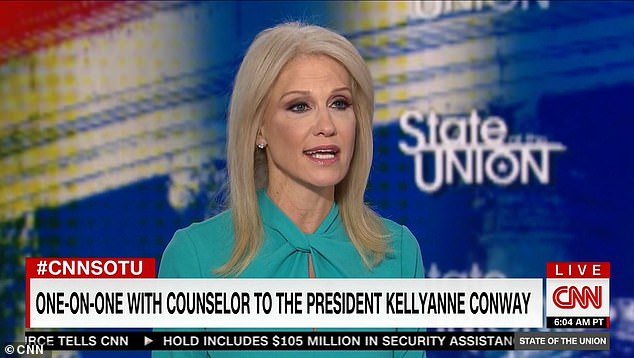 Earlier in the day, counselor Kelleyanne Conway refused to comment on whether Trump’s ask on his call was appropriate, but she noted, ‘It’s not impeachable’

The president went on in his Twitter rant to bash Democratic Rep. Adam Schiff, calling him a ‘corrupt politician’.

‘If Shifty Adam Schiff, who is a corrupt politician who fraudulently made up what I said on the ”call,” is allowed to release transcripts of the Never Trumpers & others that are & were interviewed, he will change the words that were said to suit the Dems purposes,’ Trump wrote of Schiff Sunday.

‘Republicans should give their own transcripts of the interviews to contrast with Schiff’s manipulated propaganda. House Republicans must have nothing to do with Shifty’s rendition of those interviews. He is a proven liar, leaker & freak who is really the one who should be impeached!’ he added.

Also on Sunday, the presidenturged House Speaker Nancy Pelosi to go tend to her ‘hell’-ish San Francisco district instead of spending time trying to impeach him.

‘I think Nancy Pelosi has lost her mind and I think, frankly, that she should go back home to San Francisco,’ Trump told reporters outside the White House Sunday.

Trump pointed to Pelosi’s city’s homeless problem and tied her to ‘s roaring wildfires, which he blamed earlier Sunday on California Gov. Gavin Newsom, another Democrat. 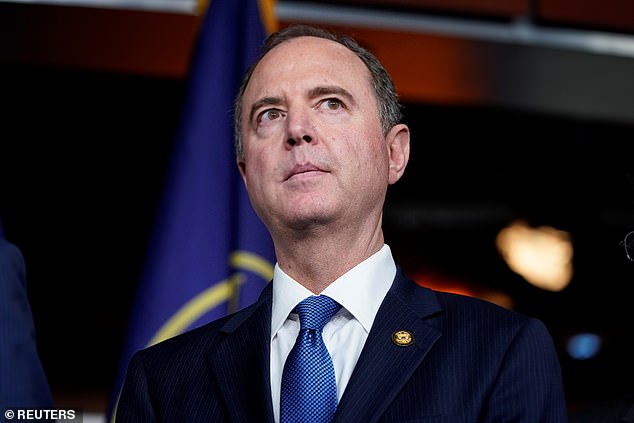 Trump went on to bash Democratic Rep. Adam Schiff, calling him a ‘corrupt politician who fraudulently made up what I said on the ”call”’

He also claimed on Sunday that polls showing that 49 percent of voters want him impeached were ‘fake’ and ‘lousy’ and said he had ‘the real polls.’

The polling from , , and  revealed that that almost half the country now supports Trump’s removal, and were conducted amid an impeachment inquiry focusing on whether POTUS improperly encouraged to carrying out investigations that would help his political goals.

When confronted by the numbers outside the White House Sunday, Trump shot back: ‘You’re looking at the wrong polls. I have the real polls. The CNN polls are fake. The Fox polls have always been lousy. I tell them they ought to get themselves a new pollster.’

Compared to a Fox poll conducted in early October – and before the military raid that killed  leader Abu Bakr al-Baghdadi, despite Trump’s decision to withdraw troops from – October 27-30 results were down 2 percent to 49 percent.

In the NBC/WSJ poll taken on the same three dates, 49 percent said they wanted Trump impeached and removed and 46 said he should stay.

It’s compared to an equal percentage believing in a poll conducted October 4-6 that he shouldn’t be impeached and should remain in office. Previously only 43 percent supported a removal and 8 percent admitted they were unsure but this time around there was more certainty among respondents. 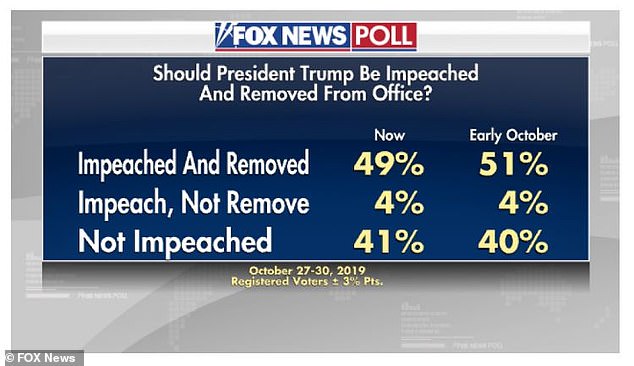 Support for Trump’s impeachment and removal was down 2 percent to 49 percent, compared to 52 percent early last month 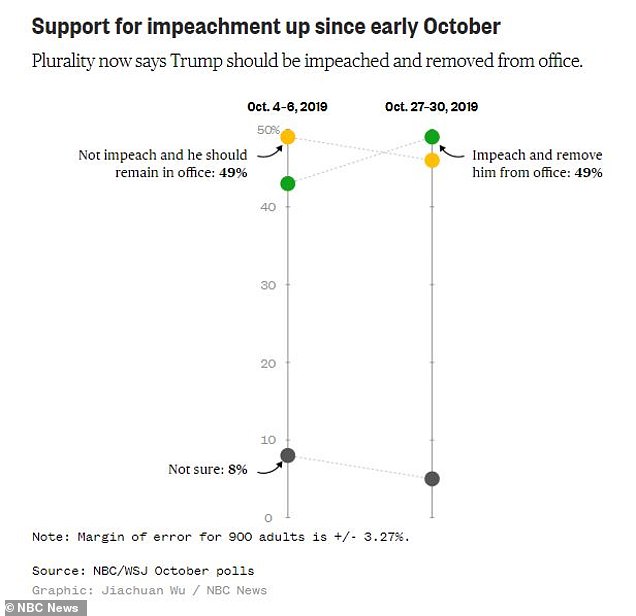 NBC/WSJ poll showed that support to impeach Trump was up since earlier in the month, with 49 percent wanting him removed. It’s compared to the same percentage previously not wanting his impeachment and wishing for him to stay in office, while 8 percent were unsure 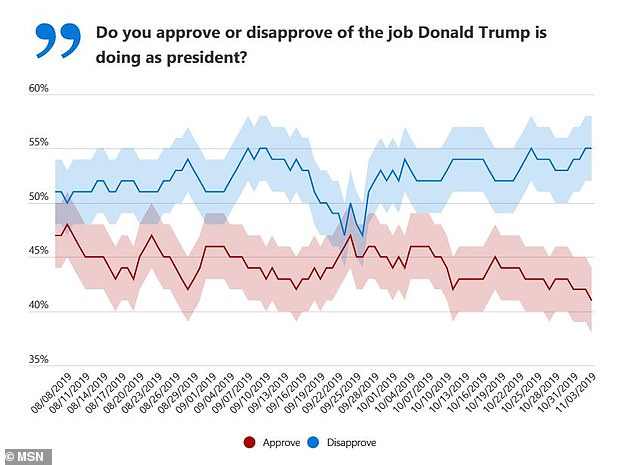 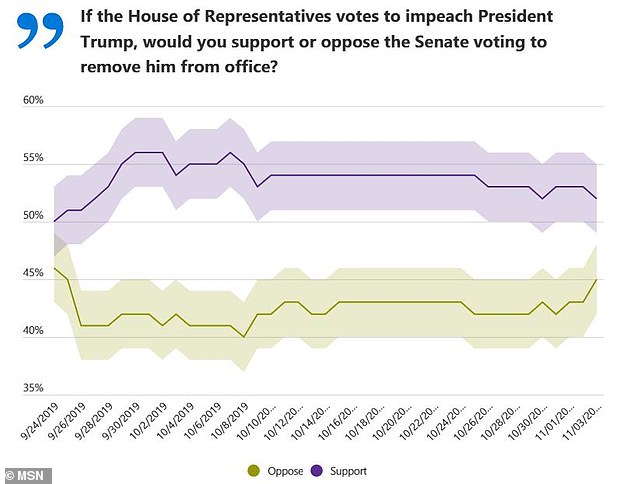 As of Sunday, a daily MSN poll showed 52 percent supported the Senate voting to remove Trump from office if he was impeached

In an MSN poll that is updated daily around noon, results on Sunday showed 52 percent supported the Senate voting to remove Trump from office if he was impeached. The percentage was down compared to results late September and early October.

The MSN result – obtained from 1,500 responses in online surveys ‘delivered to a random sample of likely voters’ – said that at the moment, 62 percent believes the country is headed in the wrong direction and 55 percent disapprove of the job President Donald Trump is doing.

‘At this very early stage of the impeachment inquiry the data suggest a path for victory for Trump with the judges in the Senate,’ Democratic pollster Jeff Horwitt of Hart Research, who conducted this survey with Republican pollster Bill McInturff at Public Opinion Strategies, told NBC/WSJ about their results.

‘But there’s a much more challenging road ahead come next November with the judges at the ballot box.’