Two bodies that were found in a shallow grave at a Texas beach have been confirmed as those of a New Hampshire couple who were traveling through the lone star state on their way to Florida.

James, 48, and Michelle Butler, 46, of Rumney, were reported missing by their concerned family after failing to contact them since around noon on October 14. Loved ones say they were used to speaking to the pair daily until contact stopped suddenly.

The married couple had been travelling America in their RV and were headed to Fort Lauderdale for a part-time job selling trees, starting November 20.

But after they stopped contacting relatives and their cell phones went straight to voicemail the alarm was raised. It is understood Michelle’s bank account has not been used since October 16.

The two corpses were found close to where the couple were last officially seen in Padre Balli Park buried on top of one another, authorities said.

It is unclear how they were killed or how long they had been there but police are now investigating their deaths as murders. 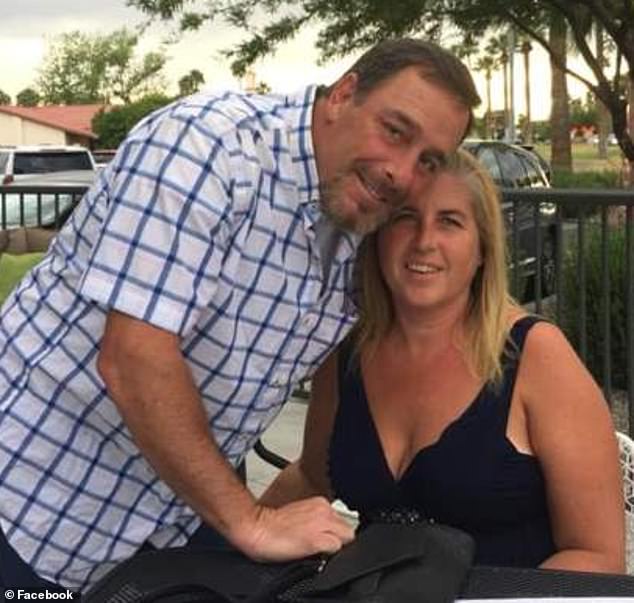 James, 48, and Michelle Butler, 46, of Rumney, picutred, were reported missing by their concerned family after failing to contact them since around noon on October 14

According to authorities a cellphone believed to belong to the couple had pinged in the area.

Jaie Garza, Chief Deputy with the Kleberg County Sheriff’s Office said: ‘We stayed overnight to protect the integrity of the crime scene.

‘Both are severely decomposed and have been taken to the Medical Examiner, but it could take several days before we know’ their identities.’

In a further twist the couple’s RV was spotted crossing an unspecified border checkpoint into Mexico on October 21 – but family say the clip shows James was not driving the vehicle.

And a day later an eyewitness claims to have seen James in a Walmart around 38 miles from where they were last seen. 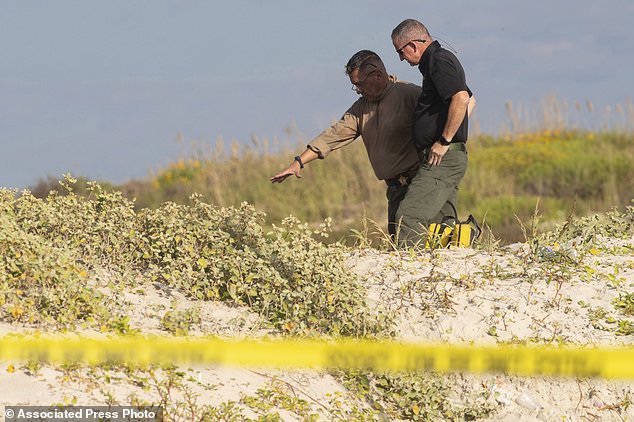 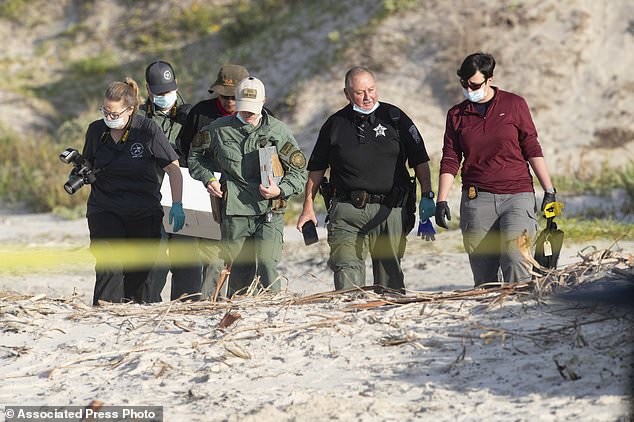 Crime teams working at the scene on October 28. It is unclear how the couple died 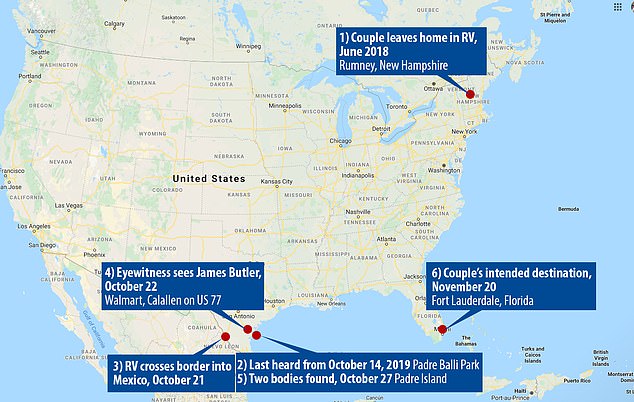 ‘He said he was from New Hampshire and said his name was Dennis. He said he lost everything and was needing help with food. 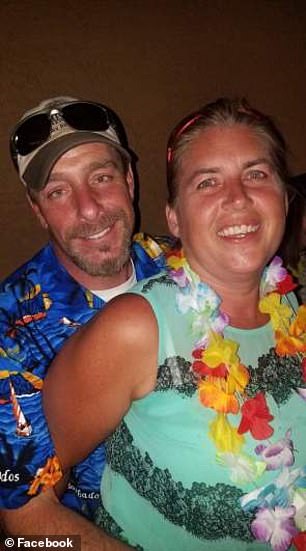 ‘He was obviously suffering some kind of memory lapse or PTSD. If anyone in that area please keep a look out. I’ve already contacted sheriff’s dept etc. Most importantly, prayers are needed.’

James and Michelle had been travelling the US after the former retired from the Navy. They often shared images of their adventures to social media, travelling in their 2018 Silver Chevrolet 2500 towing a white Cedar Creek RV.

She added: ‘They have been headed across the Texas coastline headed towards Fort Lauderdale, Florida because in November they have a job selling Christmas trees for a month.’

One of the last conversations Deborah had with her brother was about the couple selling their New Hampshire home.

She said the last spot she knew the couple to be at was Burners Beach in Corpus Christi. 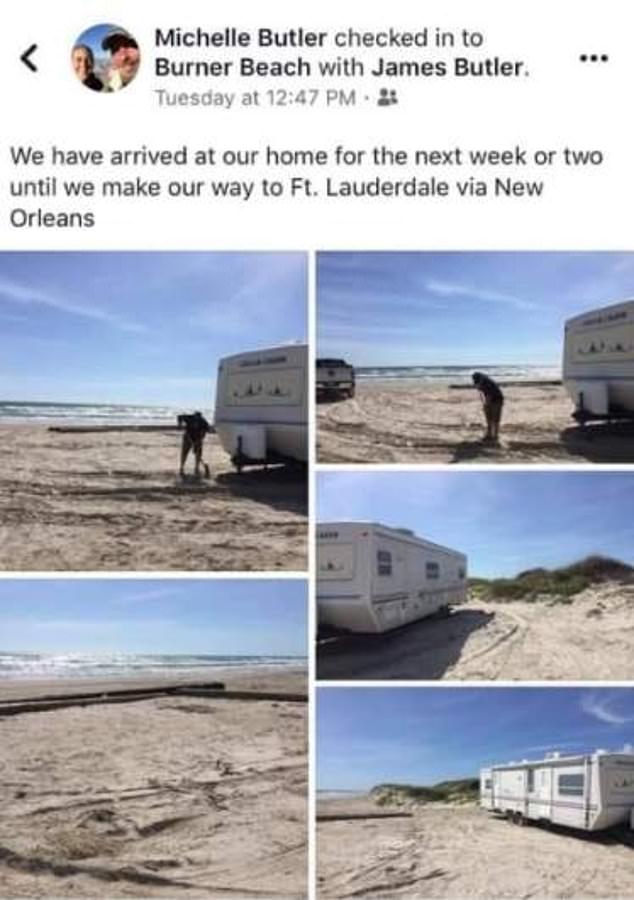 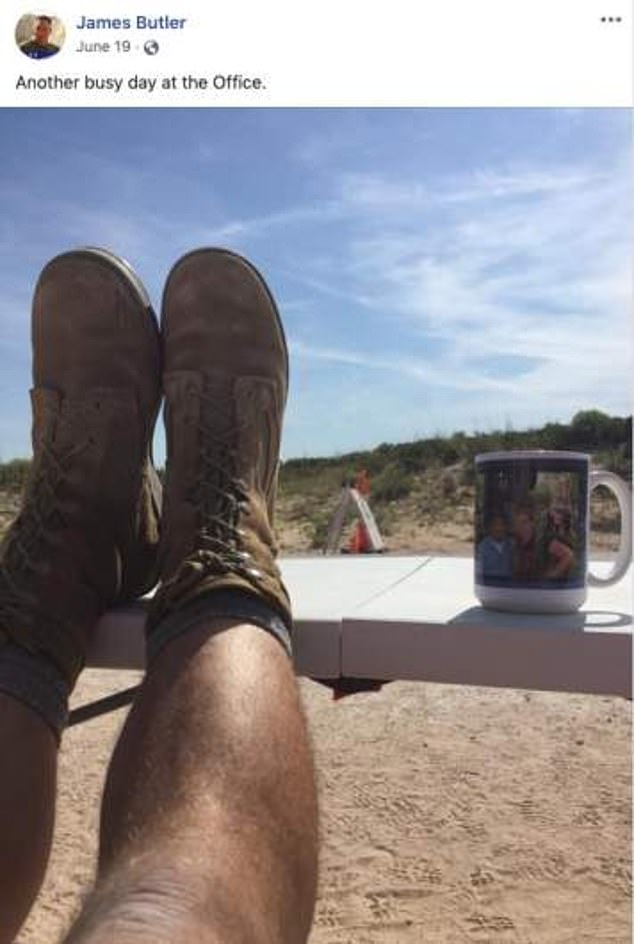 The couple often shared images of their adventures to social media, pictured