Michael Fonder is an unabashed supporter of President Trump who proudly wore a red ‘Make America Great Again’ hat and Confederate flag vest to a rally held by Vice President  in Virginia Beach on Saturday.

Pence appeared on Saturday at Kempsville Middle School in Virginia Beach, where the vice president tried to rouse up Virginia voters ahead of Tuesday’s important statewide elections.

Standing among the Trump-Pence supporters was Fonder, who told DailyMail.com that he was volunteering as a staff member with the ’s efforts to turn out the vote in Virginia. 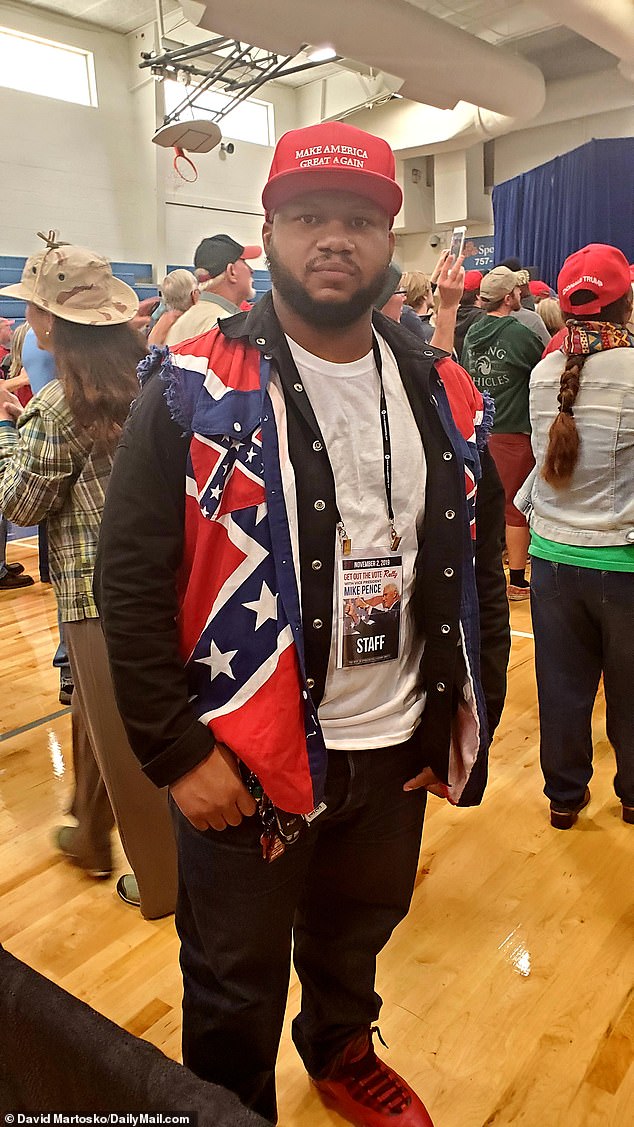 Michael Fonder, a shipyard worker originally from Chicago, is seen above on Saturday at a rally held by Vice President Mike Pence in Virginia Beach, Virginia 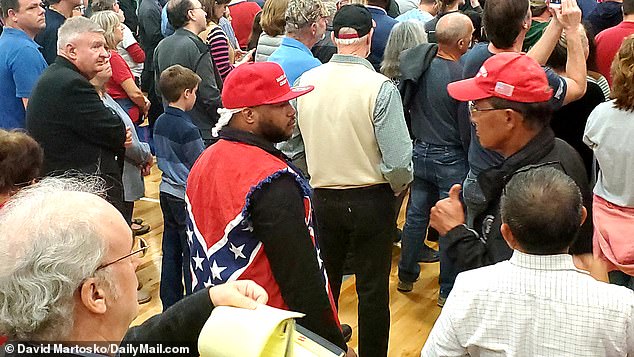 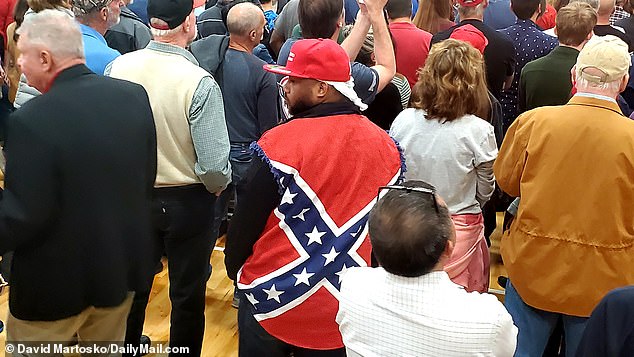 Fonder travels to Virginia for work. He is currently employed at a local shipyard.

Though he didn’t applaud at all during Pence’s speech, Fonder was asked why he was wearing a Confederate flag, the symbol of slavery and anti-black discrimination and oppression in the South, as a vest.

‘It’s what I believe in,’ Fonder said.

When asked what he thought of Trump and Pence, Fonder said: ‘I love the fact that they’re typical Americans.

‘Trump says what he feels. I’m not putting the man on a pedestal.

‘He says whatever he says. It is what it is.’

Fonder is all in on the Trump agenda. He praised the President for his policies on immigration while acknowledging that his opinions have caused his friends back in Chicago to raise eyebrows.

Asked why he likes the Trump administration, he offered two reasons: ‘They’re getting rid of the illegal immigrants. It’s time for them to go.

‘And since he’s been in office I’ve been making more money.’

Asked what he would tell someone who objects to his wardrobe, he replied: ‘I tell them all the time: “You believe what you believe, I believe what I believe”.’ 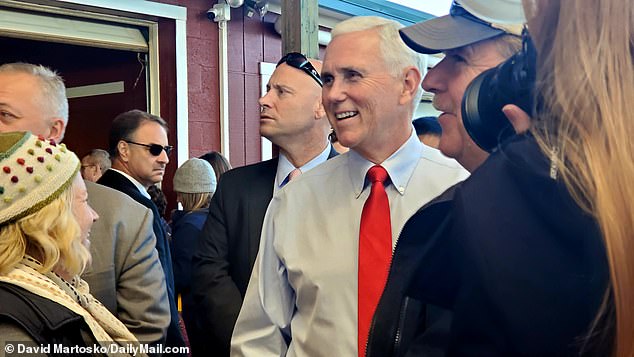 Asked if he has African-American friends who have a problem with his flag wardrobe, he answered: ‘Yeah.’

Fonder says he is unmoved by the criticism from his friends.

Asked what he tells them, he said: ‘The same thing. They know me and they respect me as a man.

‘So they say what they believe and leave it at that.’

Local officials with the Republican Party of Virginia Beach confirmed that Fonder was a volunteer.

‘We don’t stand for racism. We oppose that. We adamantly oppose racism.

‘We think that everyone deserves equal opportunities.’

Virginia is the only state holding legislative races this year where partisan control of the statehouse is up for grabs, and fundraising totals have far surpassed previous years, thanks in large part to spending by organizations allied with Democrats looking to flip the statehouse.

Groups backed by former New York City Mayor Michael Bloomberg are set to spend more than $3million, and Republican megadonor Richard Uihlein is almost single-handedly funding a write-in campaign for a GOP delegate who failed to submit his paperwork on time.

Trump turns on Democrats accusing them of threatening border security in Twitter video
White House says Democrats will 'get nothing' if Trump declares national emergency
Jussie Smollet paid $3,500 for a 'training fee' and NOT to carry out the assault on him
Father of teen left critically injured in horror hit-and-run crash calls on other driver to man up
Same-sex couple who conceived using a sperm donor find neighbour's kids have same dad
Odessa gunman who killed 7 with assault rifle identified as 36-year-old Seth Ator
Brother of two missing Idaho children asks people to 'pray for the best' on Christmas Eve
Toad-ally unexplained! Couple find tiny frog INSIDE a whole pepper