An obese woman who continued to pile on weight despite having a gastric band died of a heart attack as she got ready for work, an inquest heard.

Lilhiane Mbouyi, 47, was discovered collapsed on the bathroom floor where she worked at a BUPA healthcare centre in Winnersh, Berkshire, on November 6 2018.

She was found wearing nothing but a towel by her colleague who had to use a screw driver to force her way into the locked bathroom.

The mother-of-five, who lived in Isleworth, west , had a gastric band fitted in July 2007 but had continue to battle with her weight problems and was in regular contact with a dietitian.

Diet pills were found in her handbag on the day she died, Reading Coroner’s Court heard on Thursday.

Lilhiane Mbouyi, 47, was discovered collapsed on the bathroom floor where she worked at a BUPA healthcare centre in Winnersh, Berkshire, on November 6 2018

A coroner, who heard details of a post-mortem examination on Ms Mbouyi’s body, concluded she died of natural causes in relation to an overworked heart.

The inquest in Reading, Berkshire, was told Ms Mbouyi was getting ready in the bathroom at work when her colleague noticed how long she had been.

Her colleague Carole-Anne Cousins used a tool to unlock the bathroom door and saw the ‘substantial’ woman lying face down by the sink, she told the hearing.

But it was her manager, Donna Hern, who identified her body. She told the hearing: ‘I had known Lilhiane for a month.

‘Lilhiane did not discuss any concerns about her health and I was not aware of the incident until I received a call from a member of staff on shift.

‘At around 7am Carole-Anne called to say Lilhiane was upstairs in the bathroom but was not answering.

‘At 7.43am I received another call to say she was still in the bathroom which I thought was a long time. She got a knife and unlocked the door and found her face down on the bathroom floor wrapped in a towel.

‘Paramedics were trying to revive her for nearly an hour but she was declared deceased at 8.57am.’

The 22-stone woman was in possession of over-the-counter diet pills including XLS-Medical pills in her handbag on the day of her death.

Assistant coroner Ian Wade said: ‘She was a heavy lady, there is no doubt that she was trying hard to deal with her obesity. She was getting progressively quite large and that put a strain on her.

‘There was a problem with her cholesterol that was not obvious to her.

‘It seems to me in late 2018 she was not able to reduce her weight and that was clearly having an ongoing effect – but she would have been unaware of it.

‘It seems to me there was quite a strain on her heart and the post-mortem examination shows some of the damage to which her heart was being subjected.’ 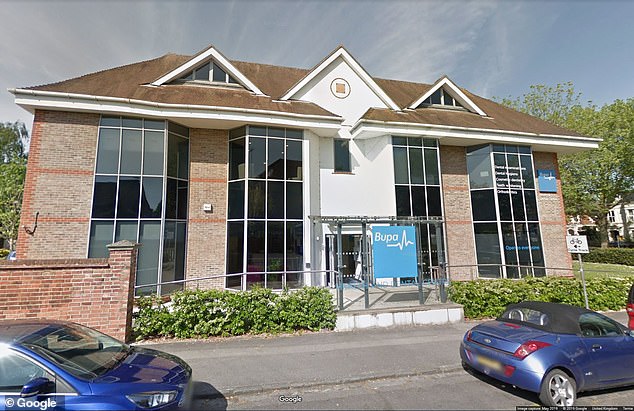 Pictured: Ms Mbouyi’s body was found at the BUPA healthcare centre where she worked in Winnersh, Berkshire

Dr Pamela Rai, principal of the Argyle Health Isleworth Practice told the inquest: ‘In 2007 Lilhiane had a gastric band fitted but in 2014 it had to be deflated due to fluid build up. She had not lost any weight with it, she had only put on weight.

‘They were considering about having a bypass but they were reluctant until she could take some control over her weight.

‘She was seeing a dietitian regularly. On one occasion, at a check-up at the Chelsea and Westminster Hospital her Body Mass Index (BMI) was 49 – the ideal BMI is 20 to 25.’

Giving evidence, the pathologist said one of Ms Mbouyi’s arteries was 50 per cent blocked, meaning blood struggled to flow through them.

She said the 47-year-old may have suffered a coronary artery spasm, possibly ‘stress-related or could have been down to the exercise she was doing in the bathroom’.

Concluding the inquest on Thursday Mr Wade said: ‘Lilhiane was taking advantage of the facilities at work when she suddenly and unexpectedly suffered in effect a heart attack.

‘She was very young. Her death on November 6 2018 was a result of natural causes relating to her heart. It was unique to Lilhiane.’

Liquid methadone found in York's Fishergate primary school grounds
Brothers of England football stars Marcus Rashford and Trent Alexander-Arnold robbed
A Vaz is a Vaz is a Vaz, just as snails have shells says QUENTIN LETTS
‘The NHS is not for sale’: Health Secretary hits back at US Ambassador
Planes carrying captives freed by Russia and Ukraine land ahead of prisoner swap
Northern Delights! Aurora Borealis is seen for first time in UK this winter
How Boris Johnson inspired Margaret Thatcher's defiant 'No! No! No!' speech
Laurence Fox receives apology and an out of court settlement from Equity