Humans will compete in tests of strength against grizzly bears in a new program coming to the Discovery Channel.

‘Man vs. Bear’ premiers next month, pitting humans against the giant animals in competitions that include bouts of tug-of-war and rolling giant logs, says the cable network.

Grizzlies ‘Honey’, ‘Bump’ and ‘Tank’, will take on men and women across five competitions during each episode, which is shot at the bears’ Utah sanctuary. The challenges are based on the bears’ natural instincts, predatory skills and actions. 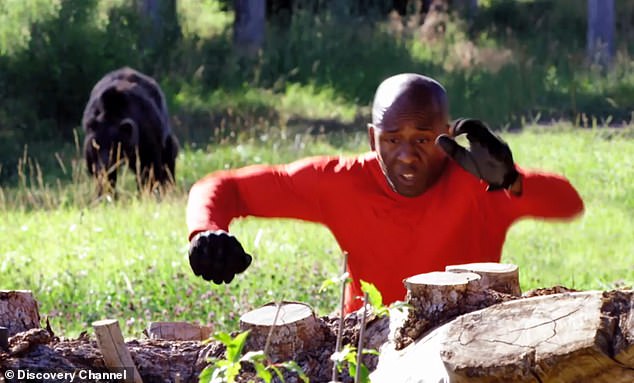 ‘Man vs. Bear’ premiers next month, pitting humans against the giant animals. A man competing on the show is shown in a race with one of the bears not far behind 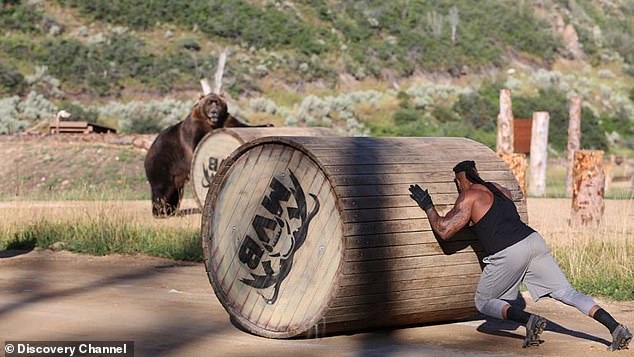 The competitions include tug of war bouts and feats of human strength, including rolling giant logs, says the cable network 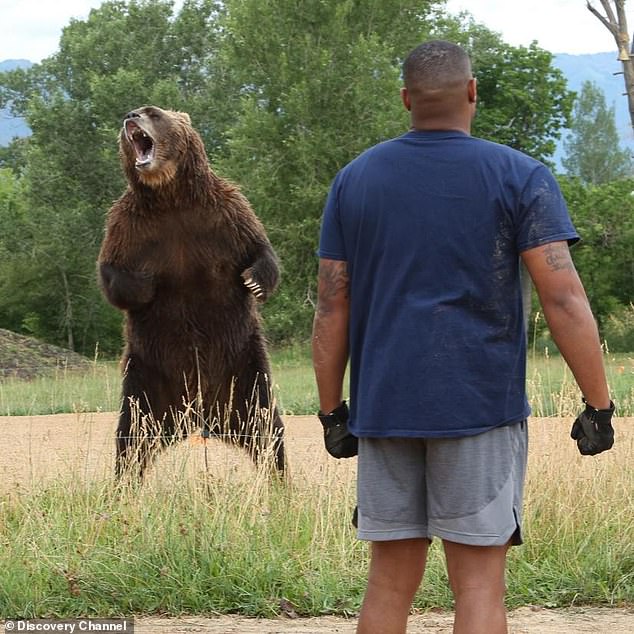 The weekly program will feature grizzlies ‘Honey Bump’ and ‘Tank’ competing with humans, both male and female, at a Utah sanctuary. A man going up against the animals on the program said it was like ‘competing against the unknown’

The two top human winners will ultimately go into the final round to face ‘Bart’, an 8-foot, six-inch tall grizzly who is the biggest on the program, according to Discovery.

‘Competing against bears is both scary and exciting,’ said Ira, an MMA fighter from Dallas who appears on the program.

‘This is a completely new challenge for me.’

Discovery says it had a ‘Movie Animals Protected’ representative present on location throughout the filming of the program, ‘to ensure our stars remained safe and well-cared-for. They observed every interaction from start to end’. 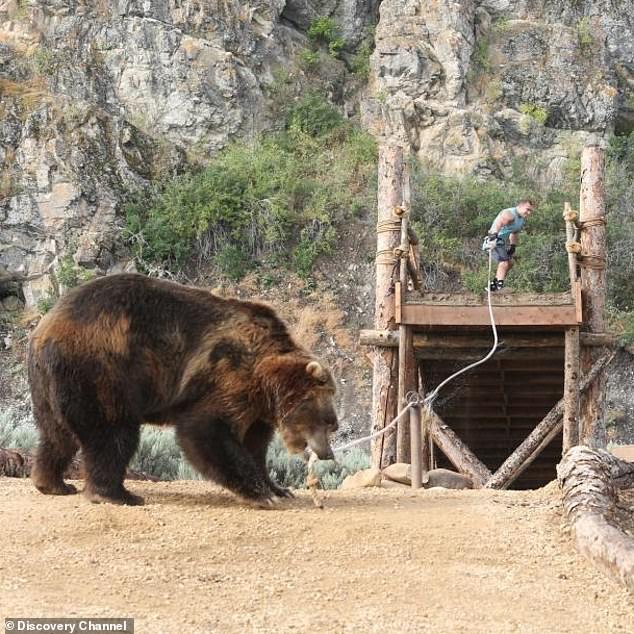 Bart, the largest on grizzly on the program at 8 feet 6 inches tall and weighing 1,400 pounds, is credited with being the most powerful. He is pictured in a tug of war competition against a human competitor 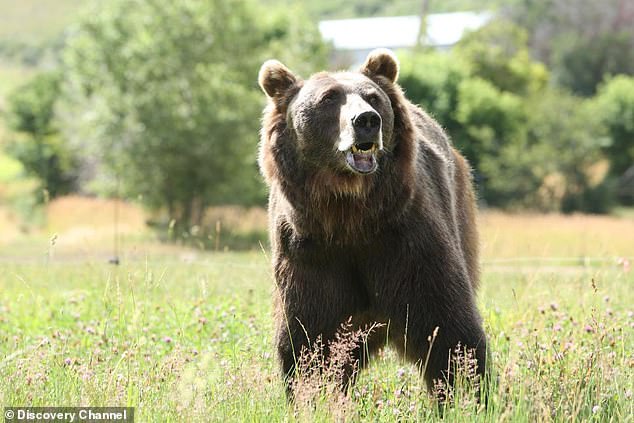 Honey Bump, the only female on the show (pictured), gets credit for being the fastest grizzly on ‘Bear Mountain’ and is known for a ferocity and predatory instinct that tops her male counterparts 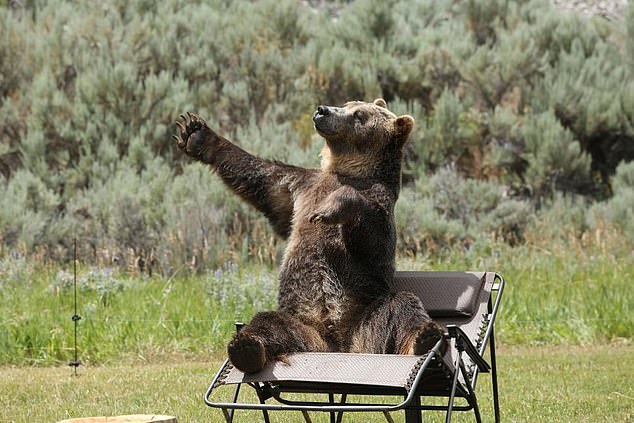 While Bart is credited with being the most powerful, the other bears also have their own unique strengths.

For example, Honey Bump, the only female, gets credit for being the fastest grizzly on ‘Bear Mountain’ and is known for a ferocity and predatory instinct that tops her male counterparts. Tank is best known for an insatiable appetite.

The program’s origins go back to when Honey Bump and Bart, both orphans, were saved from the wild by an Alaska State Trooper. The bears were later adopted by caretakers Doug and Lynne Seus, who raised the animals along with Tank for the past 20 years.

The bears are cared for on ‘a sprawling section of protected land,’ says Discovery.

The human who ends up with the most points in the competition emerges as champion. Each season’s top three winners will then return for final showdown with the bears.

Tierney is an Emmy Award-winning sports commentator who’s hosted game coverage for the New York Knicks and served as a commentator for college basketball for the last 20 years.

Casey, a wildlife expert with 25 years of experience, has lived with bears for most of his life, Discovery says.

He is a wildlife filmmaker and expert on animal biology and behavior. Casey also founded the Montana Grizzly Encounter, a grizzly rescue & education sanctuary and has rescued seven bears from inhumane captivity situations, says Discovery. 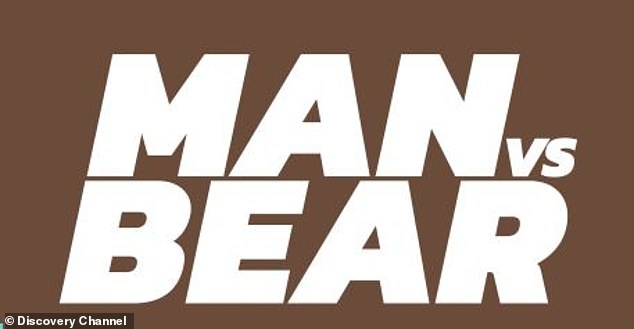 Melania and Ivanka Trump dazzle in floral at Bedminster dinner
Mormon fighting to end youth interviews ousted from faith
Colleen Ballinger shows reality of motherhood in Twitter post
Three boys, 14, and a 12-year-old boy are charged with 'gang raping a 19-year-old girl'
Jay-Z to pay legal fees of Phoenix family who was filmed being threatened at gunpoint by officers
Prankster DENIES he orchestrated theft of Blenheim Palace gold toilet in Banksy-style PR stunt
Inside Donald Trump's White House meltdown
Pamela Anderson's marriage to Jon Peters was 'called off by over TEXT MESSAGE'