Not all film versions of Stephen King novels have been successful, but the remarkable list of those that were includes The Shining, The Shawshank Redemption, The Green Mile, Stand By Me, Carrie and Misery. To that illustrious collection can now be added Doctor Sleep.

King took until 2013 to publish a sequel to his 1977 novel The Shining, which was famously given cinematic form by Stanley Kubrick. Almost as famously, King hated Kubrick’s film.

He felt it not only warped and betrayed his story, but also contained a strong streak of misogyny. His enduring resentment presented Mike Flanagan, the writer-director of Doctor Sleep, with a dilemma. He desperately wanted to pay homage to Kubrick’s celebrated movie, but he also needed to keep King happy. 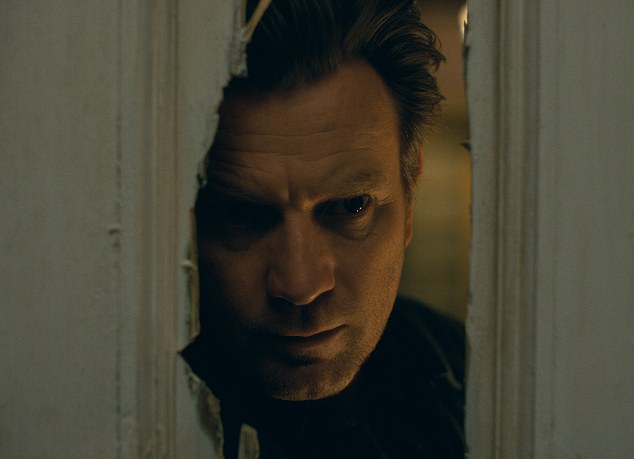 Stephen King’s sequel to The Shining stars Ewan McGregor and Rebecca Ferguson. Struggling with alcoholism, Dan Torrance remains traumatized by the sinister events that occurred at the Overlook Hotel when he was a child

That, evidently, he has done. The great man sat next to him recently at a private screening and made all the right noises. What, though, of the noises we can expect from cinema audiences?

Well, I expect a fair sprinkling of eeks, some sharp intakes of breath, the odd chuckle, and a loud collective sigh of satisfaction. Flanagan has made a very good film.

The caveat is that you really need to know The Shining to fully appreciate it, not least because Flanagan throws in lots of references of varying subtlety — 1980 as a house number, for example, referencing the year Kubrick’s film was released. He even uses two or three actual sequences from The Shining, for which he needed the permission of the Kubrick estate, and replicates several shots. 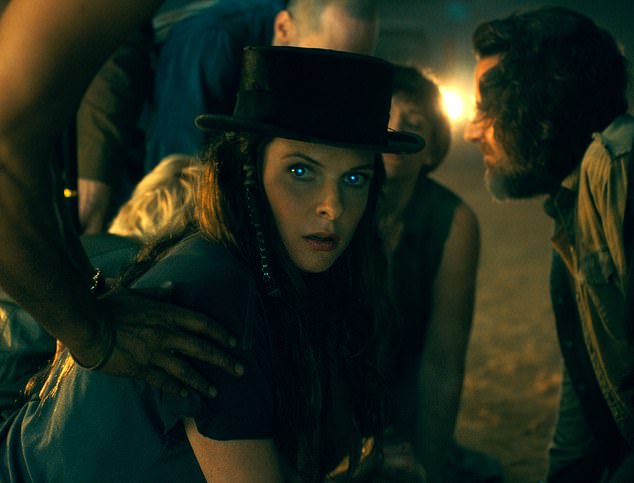 A psychopath known as Rose the Hat (Rebecca Ferguson) and her creepy band of devoted followers have worked out that by murdering children gifted with the shine, they can feed, in pursuit of their own immortality, on a special steam exhaled at the moment of death

Assuming that you do remember it, you’ll recall that at the end of The Shining, the caretaker of the Overlook Hotel high up in the Colorado Rockies, was dead, grotesquely frozen in the snow. This was Jack Torrance (as unforgettably played by Jack Nicholson).

His wife Wendy (Shelley Duvall) and young son Danny (Danny Lloyd), both of whom he had tried to murder after losing his mind, survived. The title referred to the little boy, who had the extra-sensory ability to ‘shine’, reading minds and making psychic connections with ghosts.

Doctor Sleep follows the story of the grown-up Danny (Ewan McGregor). He leads a broken, dissolute life, drinking too much and trying in vain to banish the demons that have pursued him since childhood.

Eventually he settles in the small town of Frazier, New Hampshire, where he makes a friend or two and conquers his booze habit. He gets a job at a hospice where he can sense when someone is about to die and help them go peacefully, hence ‘Doctor Sleep’. 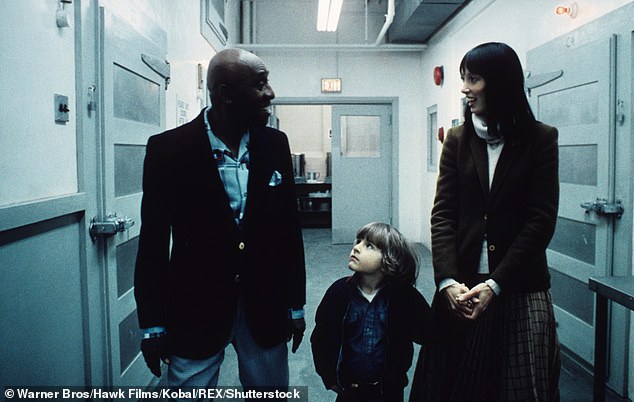 But there is trouble brewing. A psychopath known as Rose the Hat (Rebecca Ferguson) and her creepy band of devoted followers have worked out that by murdering children gifted with the shine, they can feed, in pursuit of their own immortality, on a special steam exhaled at the moment of death.

They are especially interested in a teenage girl called Abra (impressive newcomer Kyliegh Curran), who has a more powerful dose of the shine than anyone. She makes telepathic contact with Dan, and together they try to overcome Rose and her gang, a struggle which leads them inexorably to the long-abandoned Overlook Hotel.

All this is bullishly supernatural, much more so than in Kubrick’s picture, which was arguably more of a psychological thriller than a horror film, and presented Danny’s psychic powers as a side dish, with Jack’s descent into frenzied homicidal madness as the main feast.

That it works so well is partly testament to Flanagan’s skills as a horror director (his credits include Oculus, Absentia and an acclaimed Netflix series, The Haunting Of Hill House), but also to Ferguson, who is out-and-out wonderful, rarely needing to contort her lovely face, in fact somehow using her beauty itself to exude evil.

She’s been great in the last couple of Mission Impossible films. But this time she’s truly mesmerising.

As for McGregor, he’s by no means my favourite actor. I always feel that I can see his acting mechanisms whirring, rather than being made to forget that I’m watching someone pretending. But he does a pretty good job here. In fact, whether by accident or design, it’s an admirably unselfish performance, enabling others, in the more conventional sense of the verb, to shine.

Seeing a rather mediocre actor in a really good film is more fulfilling than the other way round, and if evidence were needed, After The Wedding provides it. Julianne Moore stars with Michelle Williams, with Billy Crudup in support. That’s a heck of a cast. Moore plays Theresa, a fabulously wealthy self-made businesswoman at the helm of a media empire, with Williams as Isabel, a younger woman who helps to run an orphanage in India.

When Isabel learns that a rich American patron, namely Theresa, might want to donate $2 million to the orphanage, she hotfoots it to New York so she can explain why it’s such a deserving cause. 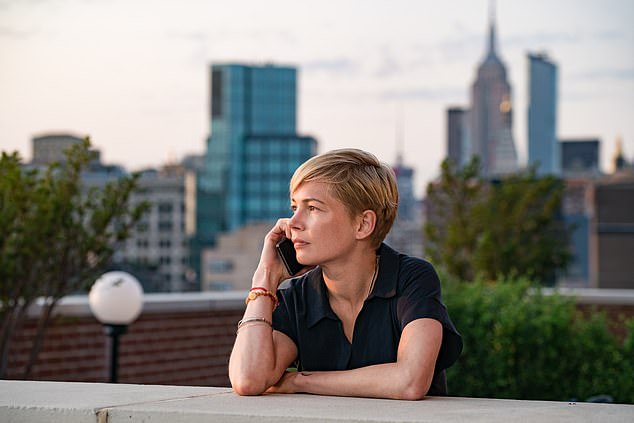 Seeing a rather mediocre actor in a really good film is more fulfilling than the other way round, and if evidence were needed, After The Wedding provides it. Pictured: Michelle Williams stars

But Theresa is preoccupied with her daughter’s forthcoming wedding, to which, apparently on a whim, she invites Isabel. It’s a preposterously lavish affair, and the highly conspicuous consumption duly makes the chippy Isabel uncomfortable.

But wait. Isabel suddenly spots Theresa’s artist husband (Crudup), by whom she had a child years earlier. They split up immediately afterwards, and the baby was given up for adoption. Or was it?

I’ll give no more away here, save to add that just when you think you’ve been dealt as many improbable twists as any single melodrama can decently produce, along comes another whopper.

As high-quality family tumults go, this is a long way from Still Alice (2014), for which Moore deservedly won an Academy Award, and still further from Manchester By The Sea (2016), for which Williams undeservedly failed to win one.

The writer-director, adapting a 2006 Danish film, is Bart Freundlich. Otherwise known as Mr Julianne Moore. Would she have taken the role if it hadn’t been her husband’s project? I’ll leave you to decide.

Let’s all raise hosannas that she’s not played by Rebel Wilson.

A delicious performance by the extremely engaging Bell adds flesh, plenty of it, to a whip-smart script by writer- director Paul Downs Colaizzo, making his feature-film debut. Apparently he based the title character and her story on his friend, also called Brittany. That’s one reason to love this movie. But there are plenty more.

Brittany is surrounded by aggravatingly thin people, notably her flat-mate Gretchen (Alice Lee), who moans, ‘if I do too much cardio I get skinny too quickly.’ 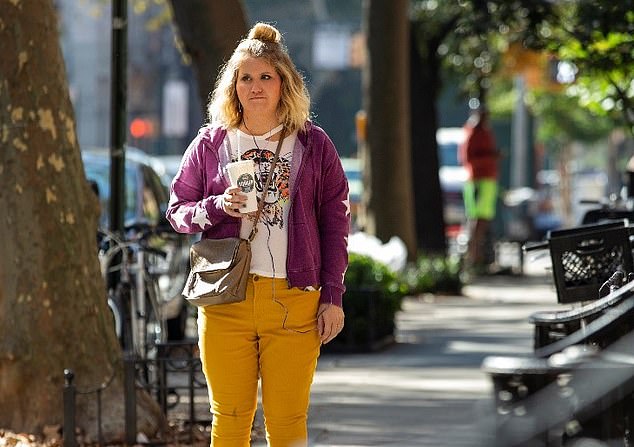 In truth, Gretchen is a size zero caricature whose character could have been better written, but there is so much here to relish that it really doesn’t matter.

Brittany decides that she’s fed up with being the fat, jolly sidekick to her slim, pretty friends. She needs to change her lifestyle, so she joins a neighbour’s running group and together they form a wildly ambitious plan to run the New York marathon.

Her neighbour, Catherine (Michaela Watkins), like so many other people in her orbit, seems to be perfect. Much more perfect than Brittany, although she soon learns that perfection exists only in the eye of the beholder. Everyone has issues and challenges of one sort or another.

In less capable hands, all this could become a little glib and sentimental. But Colaizzo’s script and Bell’s performance keep it charming and real.

She gets great support, too, especially from Utkarsh Ambudkar as her improbable love interest, Jern, whom she meets when she lands a job as a dog-sitter — having failed to become a nanny despite forging her cv, claiming among other outright fibs to have babysat ‘for the Bidens’.

So, is Brittany just 26.2 miles away from finding self-esteem? Unlike the marathon, the story doesn’t follow the expected course, but there are as many truths in it as there are laughs, and it reminded me in some ways of Muriel’s Wedding (1994).

That’s as good a recommendation as any.

Driver life of a desperate breadwinner

This film is said to be the second of a Ken Loach trilogy, of which 2016’s overrated I, Daniel Blake was the first. It is again set in the North-East, again written by Loach’s long-time collaborator Paul Laverty, and it again points a righteous torch at social injustice, but from the perspective of working-class people in employment, not out of it.

Kris Hitchen plays Ricky Turner, a Mancunian relocated to Newcastle, the home town of his wife Abbie (Debbie Honeywood). At the start of the film, he is signing up to drive for a parcel delivery company and being bombarded with jargon by his new boss, Moloney (Ross Brewster). 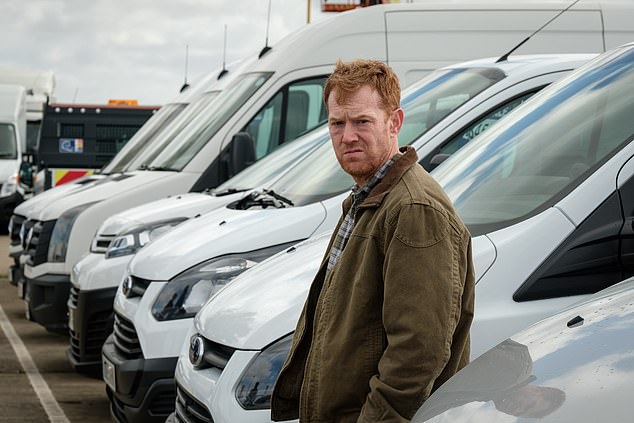 Kris Hitchen plays Ricky Turner, a Mancunian relocated to Newcastle, the home town of his wife Abbie (Debbie Honeywood). At the start of the film, he is signing up to drive for a parcel delivery company

He will be a ‘franchisee’, not an employee. And the company won’t give him a van; he’ll have to buy or lease one. The only way he can raise the funds to do that is by Abbie selling her car. But she is a contract nurse, whose round includes mostly old people, some of them dementia-ridden. Selling the car means she must make her visits by bus.

She, too, is a victim of the so-called gig economy, forced to do a full-time job effectively on a freelance basis, with next to no employment rights.

As the film unfolds, it becomes impossible for the couple to do their jobs properly. It’s not their fault — they’re proper grafters — but the demands on Ricky in particular become unsupportably heavy. 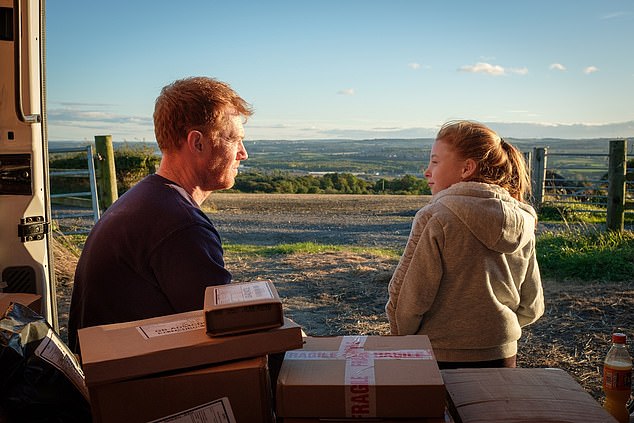 This film is said to be the second of a Ken Loach trilogy, of which 2016’s overrated I, Daniel Blake was the first

All this has troubling implications for family life. In their desperation to keep their jobs, Abbie and Ricky are increasingly unable to fulfil their responsibilities to their two children, a situation which builds towards what appears to be a crescendo of misery.

Yet Loach is too clever a filmmaker not to toss us little crumbs of hope, fleeting bursts of fun and tenderness that suggest that the Turners might again become what they used to be: a strong, loving, functional family unit.

Like most of Loach’s films, this one won’t tick everyone’s box. It’s not exactly pleasurable escapism. But nor, like some of his pictures, is it a shrill Left-wing polemic. It’s a genuinely moving family drama, with great heart and one superb performance by Hitchen, who glitters, despite the murky depths of his character’s predicament.

Little Mix insist their sexy stage image is FEMINIST as they discuss sexism in the music industry
I'm A Celebrity's Nick Knowles SLAMS 'fame-hungry nobody' Pascal Craymer
Eva Green wows in plunging leather and lace dress as she leads the Dumbo cast
Ariana Grande closes out Coachella's second weekend with another crowd-pleasing performance
Michelle Williams shines in gleaming sequined dress at Louis Vuitton Women's Resort 2020 show
Lea Michele and her BFF Jonathon Groff wrap their arms around each other during stroll in Manhattan
Game Of Thrones' Gwendoline Christie submitted herself for an Emmy as 'a testament' to her character
MAFS: Why Natasha Spencer and Mikey Pembroke did not attend the dinner party