His career in the entertainment industry spans more than three decades.

And Cameron Daddo has taken a surprising new step in his career by joining the cast of long-running soap .

On Monday, the 54-year-old actor was pictured on set in Sydney’s Palm Beach, where he was filming scenes outside Alf’s bait shop with co-star Georgie Parker. 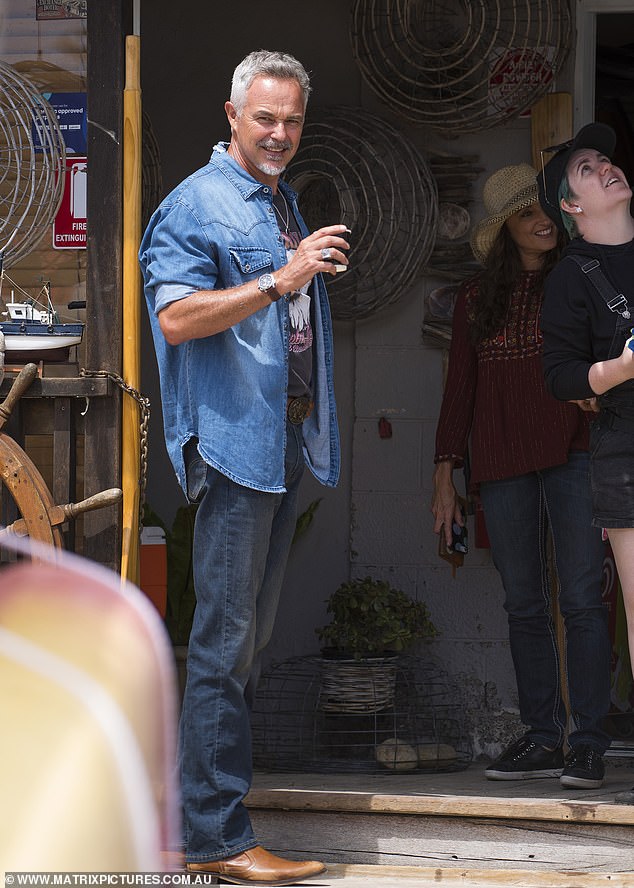 Silver fox in the Bay! Cameron Daddo is set to join the cast of long running soap Home and Away with Georgie Parker (pictured beside a producer). He was seen enjoying a cup of coffee while on a break

Cameron, who is also a radio presenter on Smooth FM, dressed casually in a denim jacket, a black vintage shirt and a pair of dark jeans.

He accessorised with a brown belt, a pendant necklace and boots.

Cameron also had a travel bag and guitar case with him, which suggests that his character may be a musician. 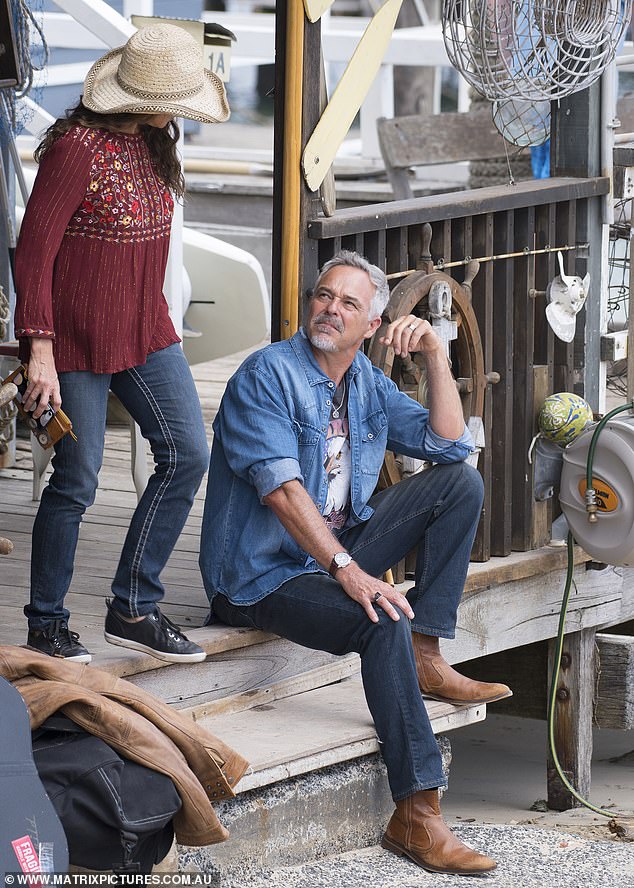 Waiting around: In one take, the actor and musician, 54, was seen sitting on the step of the bait shop as Georgie approaches him from behind. Beside him appeared to be a brown leather jacket, a black bag and what looks to be a guitar case – hinting his character may be a musician 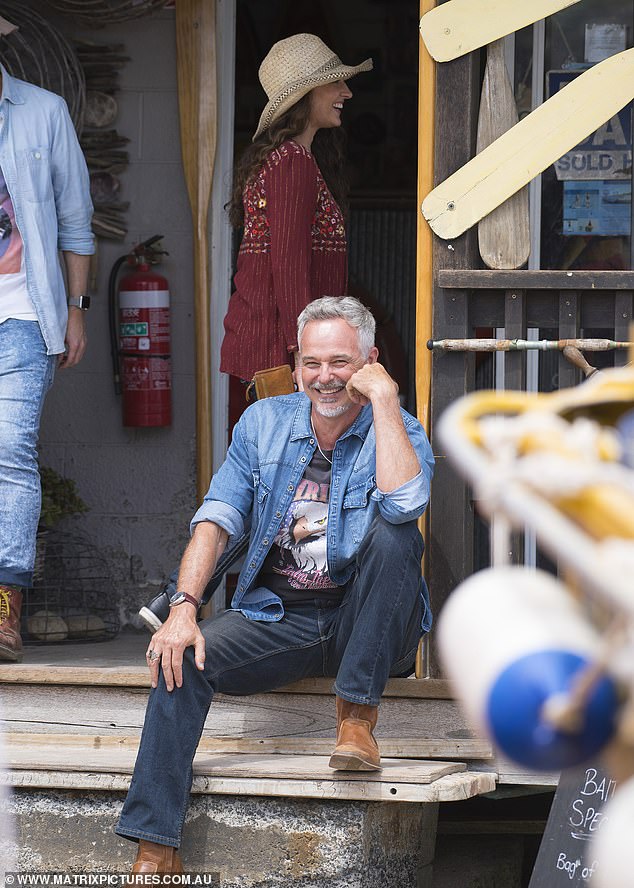 Take two: He dressed for his scenes in a denim button down, a black vintage shirt with an eagle emblazoned, and a dark coloured pair of jeans

At one stage, Cameron sat on the step of the bait shop as Georgie approached him from behind, with their characters looking surprised to see each other.

In another scene, he appeared to introduce himself to Georgie, who plays Roo Stewart, by extending his arm to shake her hand.

After a couple of takes, Cameron went for a coffee break as a Home and Away staff member appeared to adjust a set fixture. 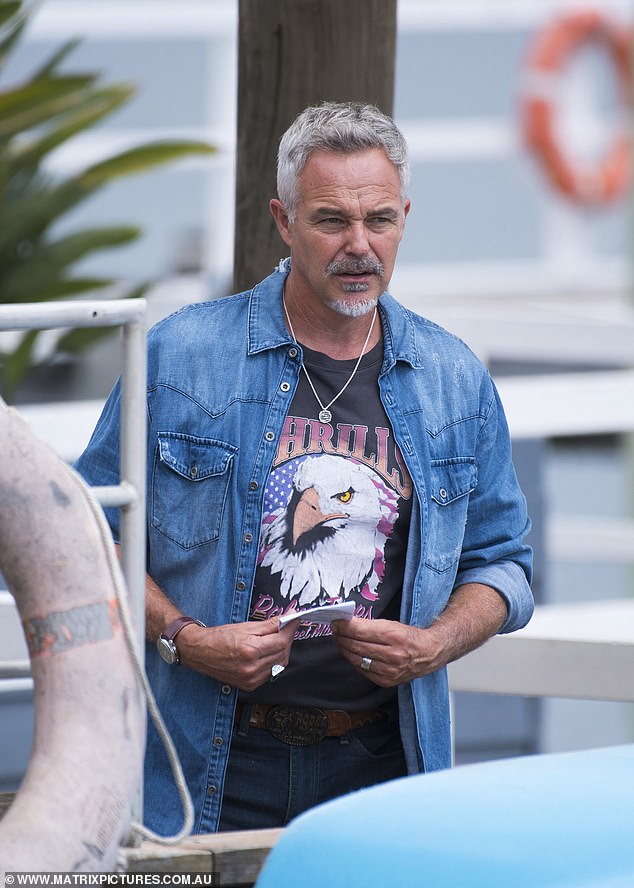 Preparation: At one point during the break, he was seen on another part of the set with a piece of paper in hand, looking focused while going over his lines 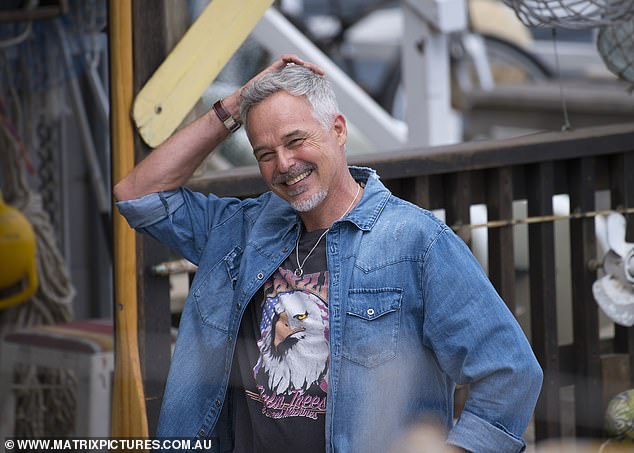 Beaming: Cameron was on set at Alf’s Bait shop and flashed his charming smile as he scratched his head in between takes with Georgie 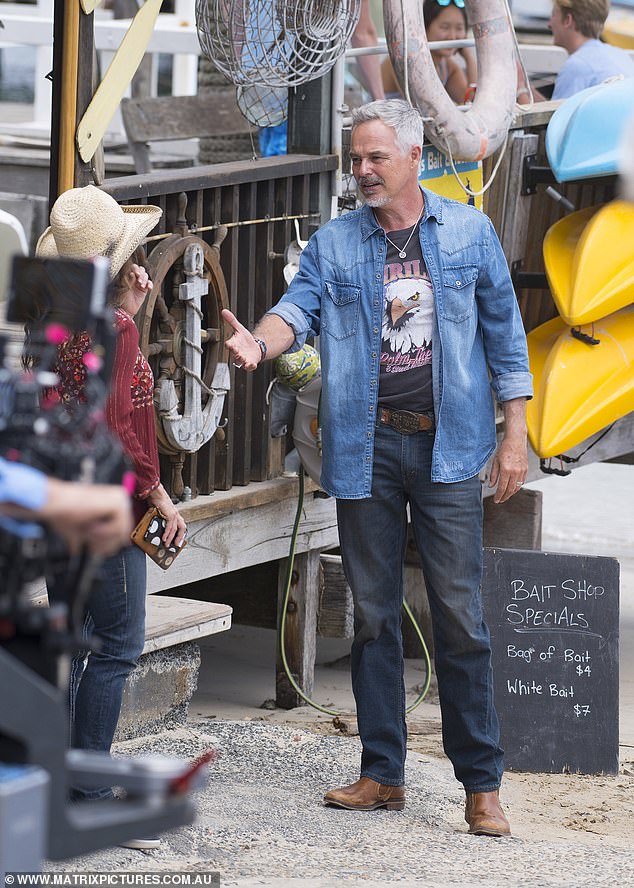 Nice to meet you: Another scene shows the him seemingly introducing himself to Georgie’s character with his arm stretched out to shake her hand

At one point during his break, Cameron was seen reading over what appeared to be a script.

Back on set, he flashed a smile before getting down to business with Georgie as their characters shared a seemingly seriously conversation.

Cameron’s Home and Away character is yet to be officially announced. 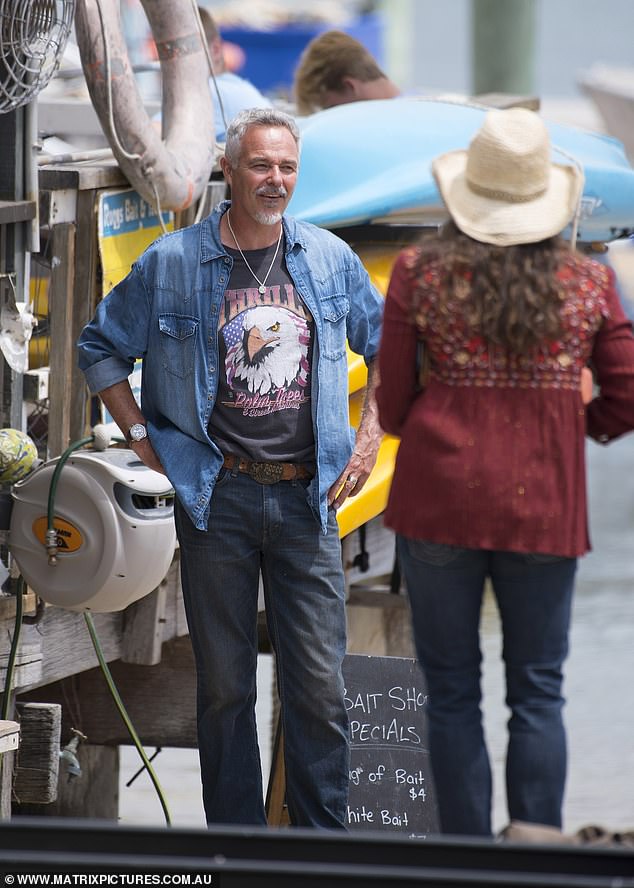 Chit chat: Seemingly in character he appeared to be having a somewhat serious conversation with his co-star – hinting his character may have sincere intentions with Roo 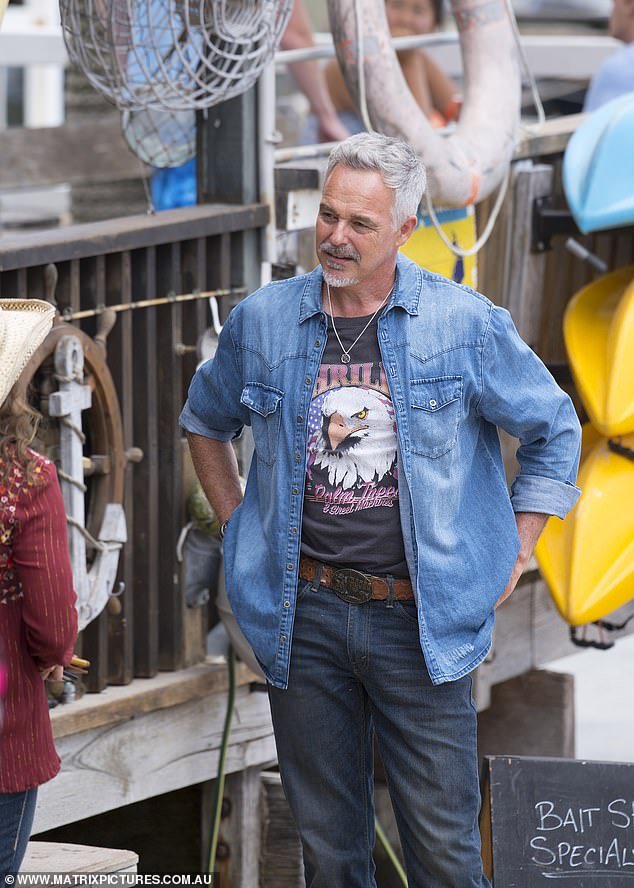 Mystery role: Cameron’s character is yet to be announced by Home and Away

On Monday, Cameron, who is married to ’90s model Allison Brahe, shared a photo to Instagram of himself on set with.

‘Any chance to catch up with my “Scorched” cohort @georgieparker is one that I can’t pass up! #action,’ he wrote in the caption, referring to the 2008 tele-movie they both starred in.

Home and Away airs from Monday to Thursday at 7.30pm on Channel Seven 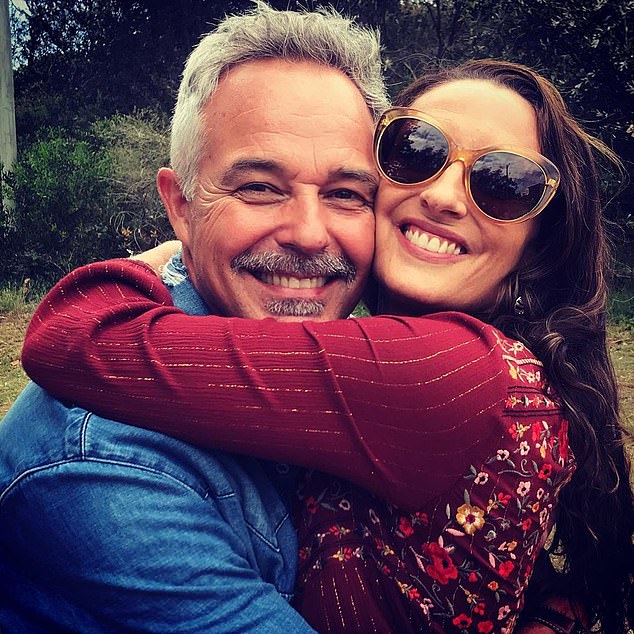 Rosie Huntington-Whiteley, 30, insists she's in no rush to marry Jason Statham, 50
Cheryl declares her love for Will.i.am ahead of The Greatest Dancer and The Voice's ratings battle
Nigella Lawson, 59, looks effortlessly stylish in a black trench coat as she runs errands
Simon Cowell, 59, shows off his astonishing weight loss as he films The X Factor in his Malibu home
Barbara Windsor makes rare TV appearance
Khloe Kardashian cuts a sexy chic look in black bustier as she steps out of studio in Calabasas
A look back at the incredible changes Masterchef has undergone
Love Island's Molly-Mae Hague reveals Tommy Fury accidentally BROKE HER NOSE