has urged voters to back his ‘oven-ready’ Brexit deal at the ballot box on December 12 as he started the general election campaign with a massive 17 point poll lead over Jeremy Corbyn.

The Prime Minister is out on the campaign trail today as the election battle got underway in earnest and he blamed MPs for stopping him from sticking to his ‘do or die’ Brexit pledge.

Today was supposed to be the day that Mr Johnson took the UK out of the EU with or without a deal but instead the divorce date has been pushed back to January 31 next year.

Mr Johnson insisted the delay was not his fault as he called on voters to oust Remainer MPs and give him a pro-Leave Tory majority to implement his divorce accord.

Speaking in Cambridge today he said: ‘There are too many people [in Parliament] who are basically opposed to Brexit, who want to frustrate it and so the only thing we can really do now is go to the people, go to the country and say come on, let’s get this thing done.

‘We have got an oven-ready deal, put it in the microwave as soon as we get back after the election on December 12, get it done and then let’s get on with our domestic agenda.’

Mr Johnson starts the race to keep hold of the keys to 10 Downing Street with a commanding poll lead over Mr Corbyn and the Labour Party.

An Ipsos Mori survey conducted for the Evening Standard between October 25-28 has the Tories on 41 per cent – up eight points since September.

But Labour is far behind on 24 per cent and only narrowly ahead of Jo Swinson and the on 20 per cent.

The poll has Nigel Farage and the Brexit Party on just seven per cent as Mr Johnson appears to be winning back Leave voters who may have ditched the Tories for the upstart movement.

Meanwhile, the Tories have a 15 point poll lead over Labour in a new YouGov survey conducted for The Times.

The Tories and the Labour Party were in similar positions in the polls at the start of the 2017 general election campaign but ultimately ended up with 42 per cent and 40 per cent of the total vote share on polling day. 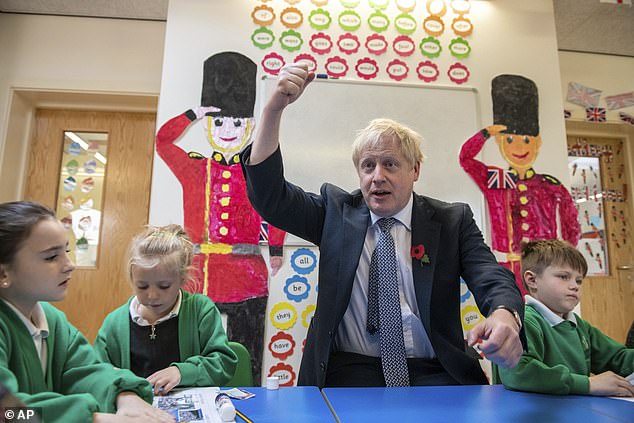 Boris Johnson, pictured in Bury St Edmunds today, has urged voters to give him a majority on December 12 so that he can implement his ‘oven-ready’ Brexit deal 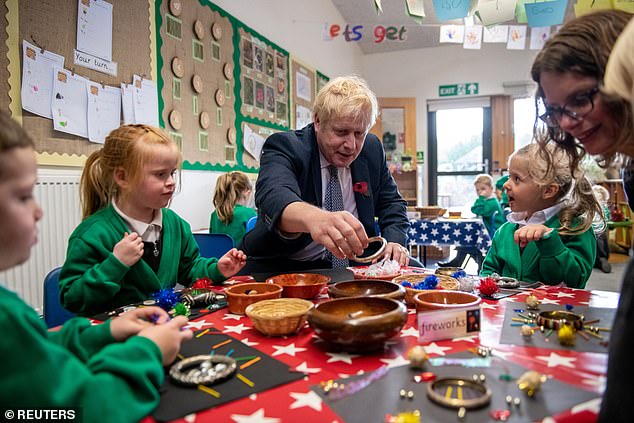 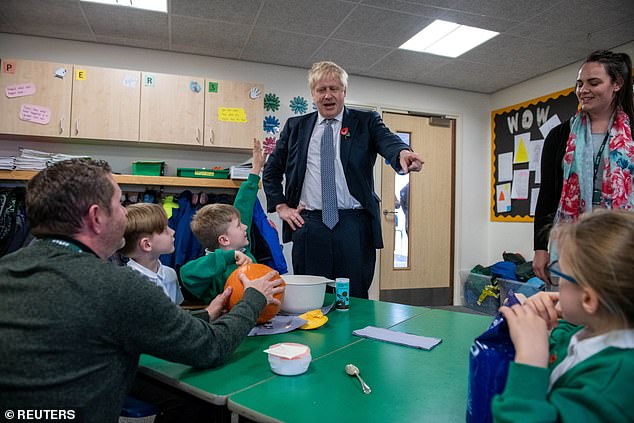 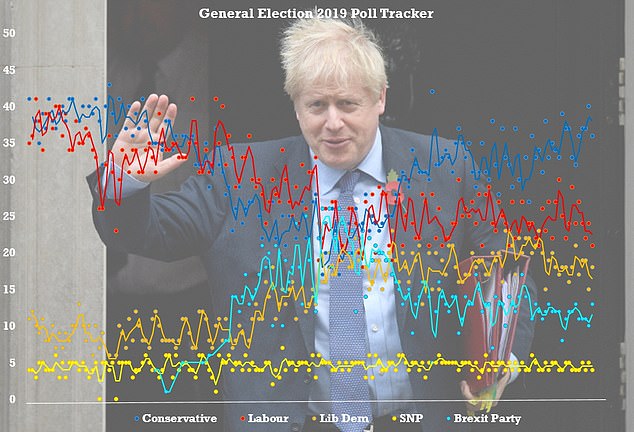 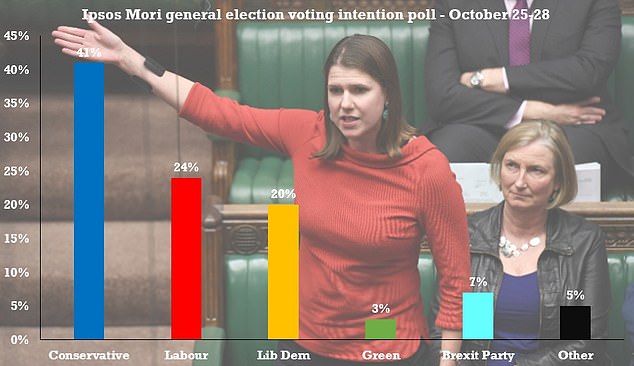 Gideon Skinner, head of politics at Ipsos Mori, said: ‘As Theresa May knows, a poll lead before a campaign has got started is no guarantee of success.

‘This poll also puts the Conservatives at the upper margins compared with other polls.

‘Nevertheless, it confirms the Conservatives are starting in a strong position: on a central issue of the campaign their Brexit strategy is galvanising their support, with little sign they are receiving much blame for the delay, while they also have the most popular leader, a key factor in previous elections.’

The new YouGov survey puts the Conservative Party on 36 per cent while Labour is trailing on 21 per cent.

That poll was carried out on October 29-30 and while the Tories have not moved since YouGov’s last poll on October 24-25, Labour has dropped two points.

This time last week Mr Corbyn’s party was on 23 per cent but it has lost some support and now only has a three point lead over the Lib Dems.

Ms Swinson’s party is on 18 per cent in the latest YouGov poll – the same as last week – with the Brexit Party in fourth place on 13 per cent – up one point.

The Green Party is in fifth place on six per cent and the SNP is polling at four per cent.

The Electoral Calculus seat prediction website suggests that if the YouGov numbers were replicated on December 12 then Mr Johnson could win a 168 seat majority.

The JPMorgan investment firm today said that a swing model based on polls and the 2017 election result suggested the Tories could end up with 352 seats and an outright majority of 60. 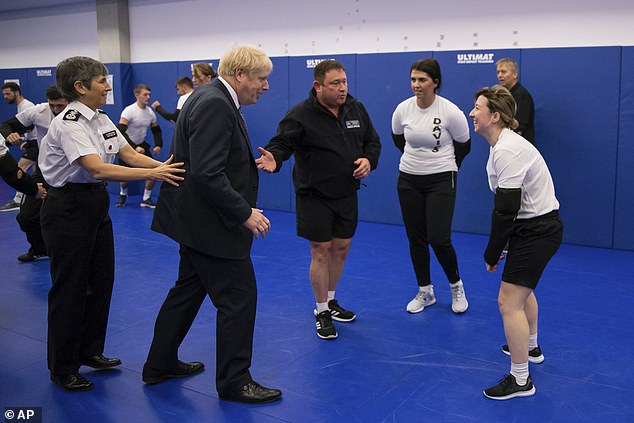 Later, Mr Johnson was steadied by Met Police commissioner Cressida Dick as he visits a self-defence class at the force’s college in Hendon, north London 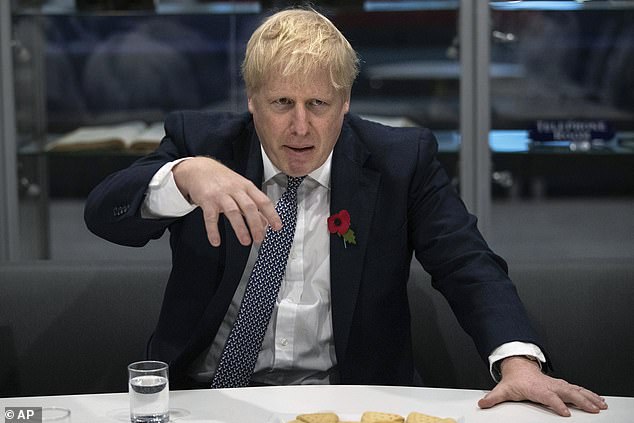 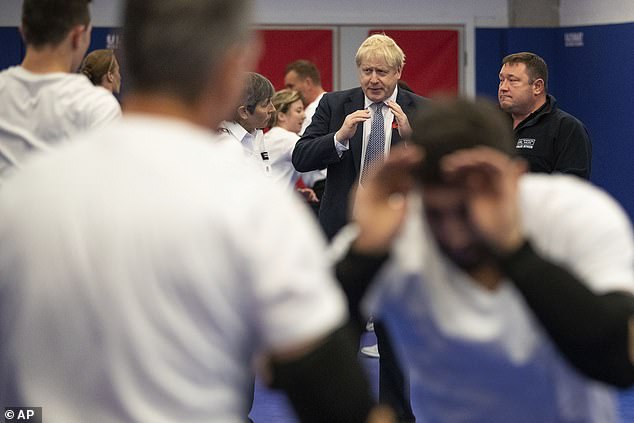 Mr Johnson appeared to enjoy himself at the self-defence class in Hendon today, gesturing as he observed recruits in training 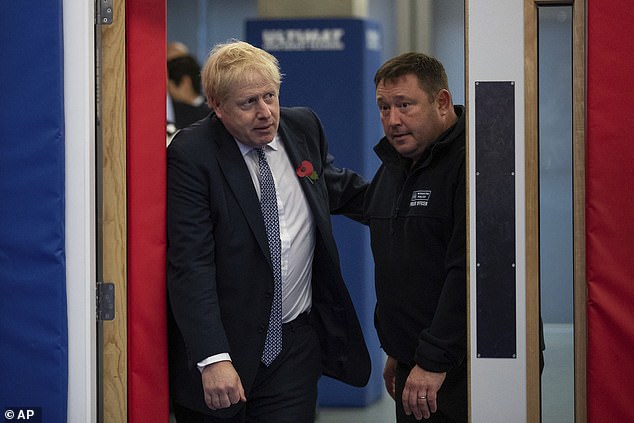 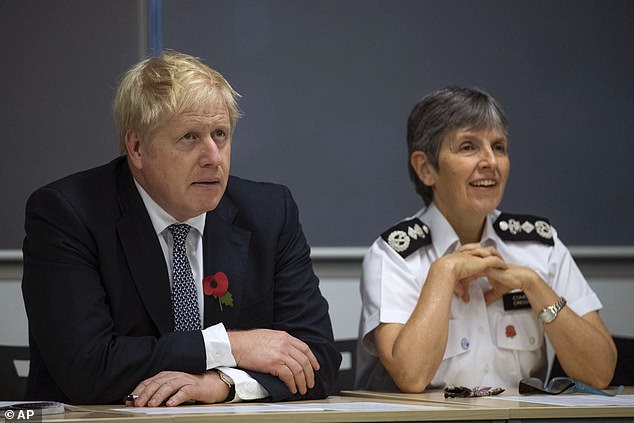 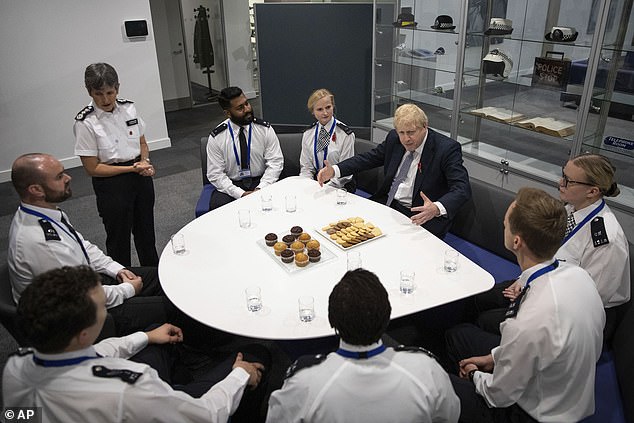 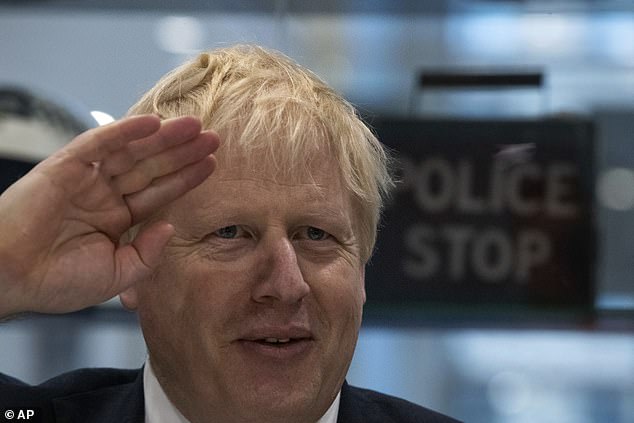 Mr Johnson has vowed to recruit an extra 20,000 police officers to bolster his government’s fight against crime

Mr Johnson today insisted that he can be trusted to deliver Brexit despite breaking his ‘do or die’ vow.

He said: ‘I am incredibly frustrated that we have not been able to get Brexit done today but let’s be in no doubt what has happened.

‘We had a fantastic deal on the table, the House of Commons voted it through but then they voted again for delay and we went round it exhaustively with members of Parliament.

‘I offered them more time to debate our deal twice, I said we can sit round the clock and debate it and they still wouldn’t get it through.

‘After three and a half years it was perfectly obvious to me that this Parliament is just not going to vote Brexit through.’

Despite the sizeable poll lead over Labour, the latest numbers do also contain a warning for Mr Johnson.

YouGov polling done for The Times shows that some 57 per cent of Leave voters are ‘disappointed’ that Brexit has been delayed again. 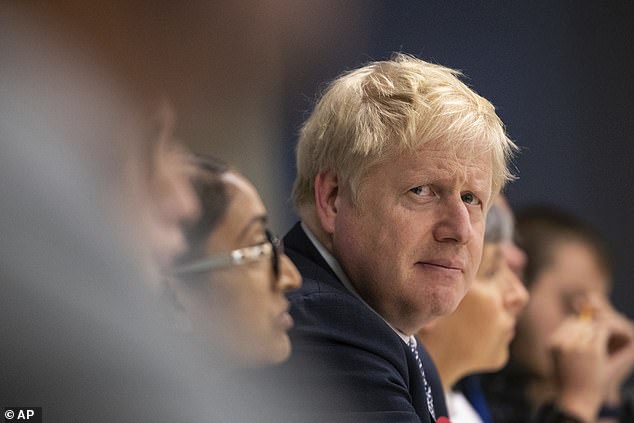 The Prime Minister looks on during a meeting with senior police officers, including Met commissioner Cressida Dick (pictured to his left) 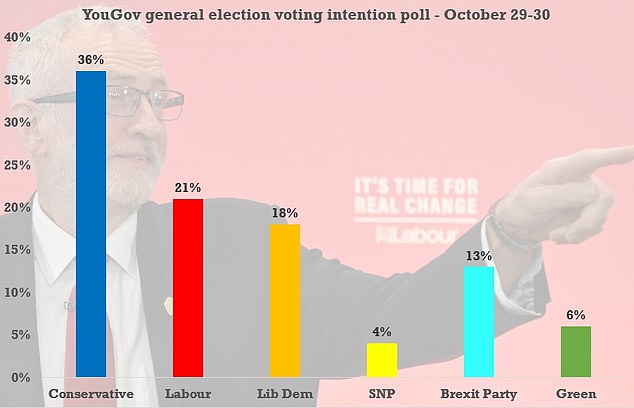 Meanwhile, 49 per cent of Brexit voters said they feel ‘betrayed’ after the October 31 departure date was not stuck to.

Mr Johnson repeatedly said he would take the UK out of the EU ‘do or die’ and with or without a deal on Halloween but ultimately he failed to deliver as Brexit was postponed to January 31 next year.

The Tory leader is fighting the election on a pledge to implement his divorce deal.

But the numbers suggest he could face a fight to win back the trust of many Leave voters who could choose to back Nigel Farage and the Brexit Party instead.

Mr Farage is campaigning to deliver a ‘clean break’ No Deal split from Brussels.

Theresa May’s pollster during her time in Number 10, James Johnson, told The Times the level of Brexiteer anger was ‘roughly double’ that recorded after the original March 29 Brexit date was pushed back.

‘The levels of anger and betrayal do show the Conservatives have a vulnerability that Nigel Farage could exploit,’ Mr Johnson said.

Hurricane Michael before and after photos capture utter devastation
Excessive posting of selfies linked to increase in...
Hillary Clinton and daughter Chelsea with her husband Marc take in a night on Broadway with friends
Fantasist jailed for falsely accusing 15 men of sex attacks LOSES appeal
Heathrow to spend £50million on new scanners which could end need to remove liquids from luggage
Ministers threaten to step in as British teenager convicted of inventing 'gang rape' in Ayia Napa
What do HMRC tax codes mean and am I paying too much?
'Discriminatory' lockdown should be eased for the healthy elderly, say senior doctors