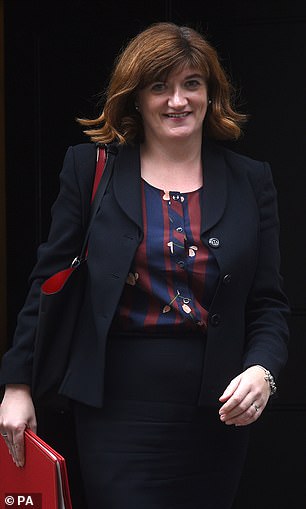 Nicky Morgan announced today she will quit the Commons before the election, citing the abuse she had received and blasting Parliament for not ‘respecting votes cast by the electorate’.

The Culture Secretary is the latest Tory to say they won’t stand in the forthcoming poll after Boris Johnson snubbed Amber Rudd’s plea to have her whip restored.

Ms Morgan, a Remainer who accepted the result of the referendum, wrote in her resignation letter: ‘I have always believed that it is through politics that real and positive change can be made to our communities and country.

‘But the clear impact on my family and the other sacrifices involved in, and the abuse for, doing the job of a modern MP can only be justified if, ultimately, Parliament does what it is supposed to do – represent those we serve in all areas of policy, respect votes by the electorate and make decisions in the overall national interest.’

It comes after the PM sparked a public spat with Amber Rudd over his decision not to let her back into the Tory fold.

The Hastings and Rye MP gave up the Conservative whip in solidarity with 21 Remainer rebels who were expelled by the PM last month.

Ten of the MPs were brought back into the fold last night as Mr Johnson gears up for the looming election battle.

Ms Morgan, a Remainer who said she accepted the result of the referendum, announced the decision on Twitter 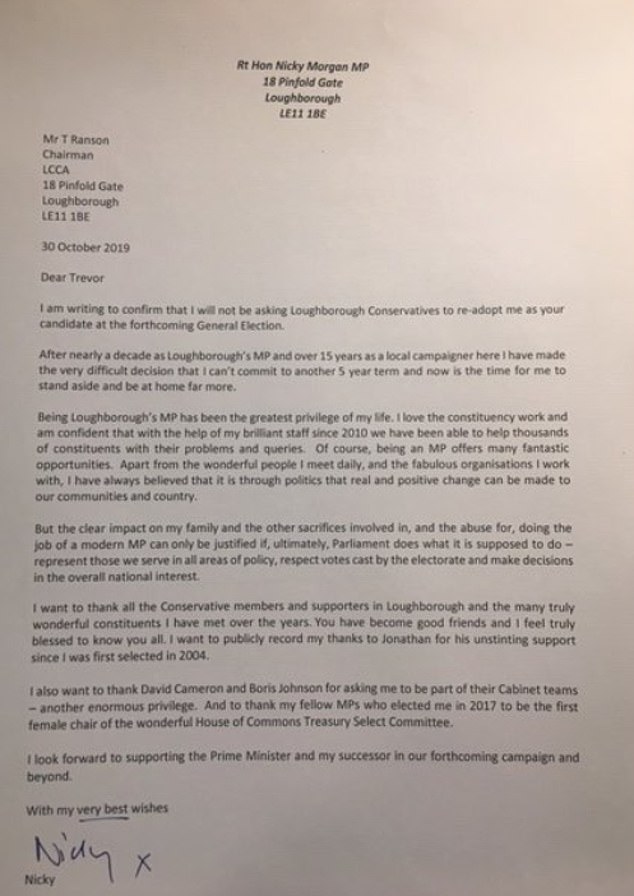 Ms Morgan, a Remainer who said she accepted the result of the referendum, cited the ‘clear impact’ on her family as well as the abuse she has received for her desire to leave the Commons

Ms Rudd said this morning she would not be standing in the national ballot on December 12 – but made clear she was hoping to have the whip restored.

However, in a brutal letter chief whip Mark Spencer refused her plea to be let back in. ‘You were clear that you did not support the approach of the PM and did not have confidence in him,’ he said.

‘I take the view that the receipt of the whip is an honour, not a right and as such it cannot be discarded or returned at will if it is to have any meaning.’

The missive provoked a furious response from Ms Rudd, who shot back: ‘Funny thing really, as just last week the PM asked me to stand in the General Election.’

She also delivered a thinly-veiled swipe at maverick Downing Street strategist Dominic Cummings, saying the chief whip had been briefed by the ‘wrong No10 sources’.

It underlines the dramatic fall from grace for Ms Rudd, who was once touted as a potential future Tory leader.

Ms Rudd had a wafer-thin majority of just 346 in the 2017 election – meaning her seat is one of Labour’s top targets.

However, the constituency voted 56 per cent for Leave, suggesting that a Brexiteer Conservative candidate might have better prospects. 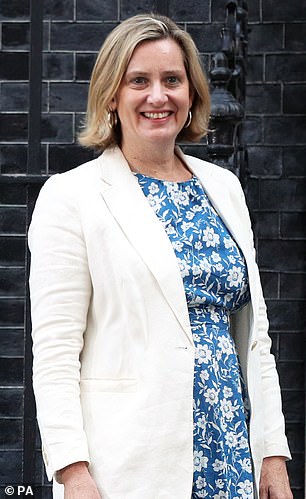 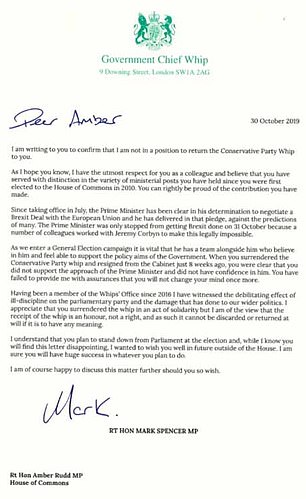 In a brutal letter (right), chief whip Mark Spencer refused the plea from Amber Rudd (left) to be let back in to the Tory fold

‘I’m not finished with politics, I’m just not standing at this election,’ Ms Rudd .

She added: ‘I spoke to the Prime Minister and had a good meeting with him a few days ago.

The Tory rebels who have had the whip restored

‘I’m really confident of my position.

‘I will be leaving the House of Commons on perfectly good terms with the Prime Minister and I want him to succeed.’

Ms Rudd said she will meet Chief Whip Mark Spencer today and ask for the whip back.

‘I’m happy to leave the House of Commons as a Conservative MP,’ she said.

Mr Johnson met with 10 of the 21 rebel MPs in his House of Commons office last night as they were offered the chance to return to the Tory fold.

All 10 accepted the PM’s offer and will now be able to stand as Tory candidates at the forthcoming snap general election if they want to.

The remaining 11 rebels, including Philip Hammond and Ken Clarke, have not been welcomed back.

However, a Tory source said that did not mean that the remaining 11 will be permanently deprived of the whip as they suggested there could still be a way back for the PM’s critics.

Former de-facto deputy PM Sir David Lidington has joined the laundry list of Tory MP who will not stand in the election.

The Aylesbury MP’s cited the ‘heavy cost’ of politics on family life in a letter to The Bucks Herald newspaper. 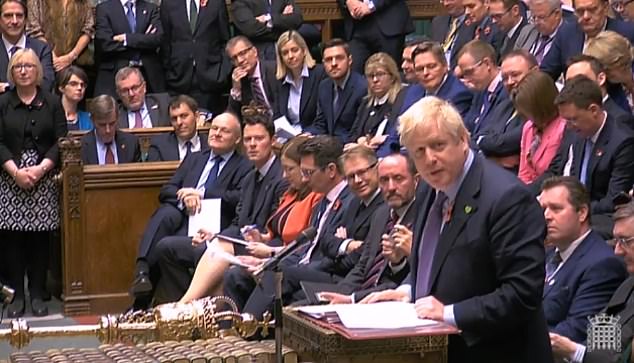 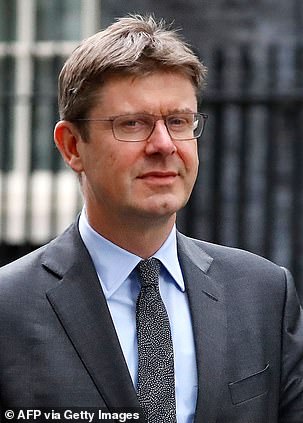 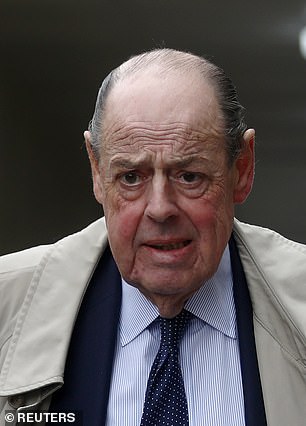 Greg Clark, the former business secretary, and Sir Nicholas Soames, the grandson of Winston Churchill, were among the 10 rebels who had the whip restored

He said: ‘After a great deal of thought I have decided not to seek re-election at the forthcoming general election.

‘Politics imposes a heavy cost on family and private life. That is not a complaint: people who seek elected office do so voluntarily.

The Tories will achieve a majority of 44 if no strategic voting took place – but anti-Brexit voters could scupper this by working together.

A study by the Best for Britain campaign found if 30 per cent of Remain backers voted in this way they could swing the election and secure a Remain majority of four to deliver a Labour-backed second referendum.

If 40 per cent of pro-Remain voters worked tactically they could return a majority of 36 and a leadership strongly reflecting their Brexit views, according to the research from the group campaigning to stay in the EU.

The research was based on seat-by-seat analysis of 46,000 people over September and October, using a similar technique to one that gave a rare but accurate prediction that Donald Trump would become US president in 2016.

Tactical voting could worry Mr Johnson closer to home. He won his Uxbridge and South Ruislip seat in 2017 with 50 per cent of votes against Labour’s 40 per cent.

‘But I have come to the conclusion that now is the right time for me to give a higher priority in terms of my time and energy, to Helen and my family who have given unstinting support to me during more than a quarter of a century in the House of Commons.’

Sir Alan Duncan and Sir Patrick McLoughlin have also declared that they will not seek reelection.

Mr  and Jeremy Corbyn traded the first blows of the election battle at a fiery PMQs session today.

Mr Johnson insisted the Tories are the real party of the NHS as he faced off against the Labour leader for the last time before Parliament dissolves for the campaign.

He dismissed claims from Mr Corbyn that the government is preparing to ‘sell out’ the health service in a trade deal with the US.

Mr Johnson said the NHS was receiving ‘unrivalled and unprecedented sums of taxpayers money’ under the Conservatives. Mr Corbyn was ‘out of his mind’ to try to stop the public and private sectors cooperating to provide better care, he insisted.

‘It’s all very easy to be an Islingtonian protester and say that you side with Russia over what happened in Salisbury or say you have a £196 billion programme of re-nationalisation or continually to flip-flop one way or the other, now Leave, now Remain, refusing to respect the verdict of the people in the referendum on the EU.

‘Above all it means getting Brexit done and ending the dither and delay.

‘The time for protest is over, it’s time for leadership – and that is what this Government provides.’

Mr Corbyn said the PM’s remarks were ‘a bit odd’ given he withdrew legislation connected to his Brexit deal, adding Mr Johnson should have shown ‘some empathy’ in his response to the NHS case raised.

The clashes came as Tory and Labour strategists finalise their plans for a ‘mega tough’ and incredibly volatile struggle, where local factors are expected to play a pivotal role.

They are set to target ‘Workington Man’ – older, white, non-graduate male voters living in swing seats in the North of England.

Experts have warned that Mr Johnson’s strident call to ‘get Brexit done’ and blueprint for a loose, Canada-style relationship with the EU could lose his party at least 20 seats to the unashamedly pro-Remain Lib Dems and SNP.

Key battlegrounds will include Cheltenham in Gloucestershire and Stirling north of the border.

To offset the anticipated losses the Conservatives must make significant progress against Labour – probably requiring at least 50 gains to get Mr Johnson the working majority that he craves. 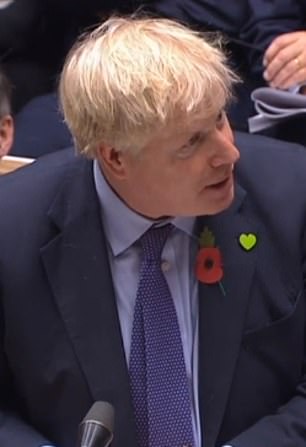 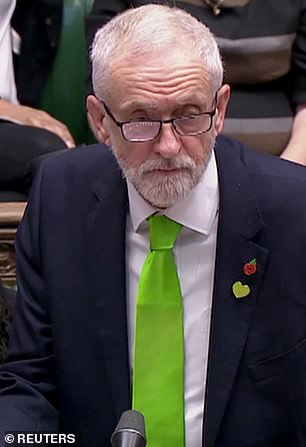 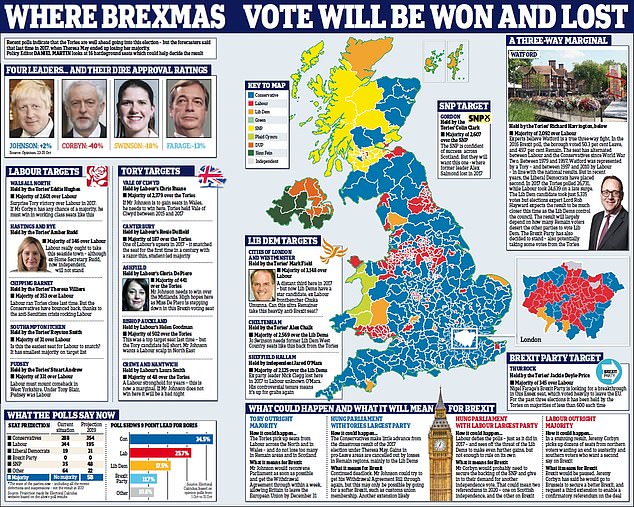 QUENTING LETTS: Nick Clegg is a slippery hypocrite
Secret Facebook emails by Mark Zuckerberg seized by Parliament's serjeant-at-arms
Brad Pitt makes an appearance at ex-wife Jennifer Aniston's 50th birthday celebration
Lion is declawed by Palestinian zoo so visitors can 'play' with the animal - sparking anger
Destination Downing Street? Boris and Carrie leave his country pad ahead of historic political week
Ellie Goulding's bridesmaids include her stylist, friends and the president for Sony Music
Barack Obama shares photo booth snaps on Michelle's birthday
Boris puts Dominic Cummings on his 'last chance' as one witness admits he made up sighting of aide