A woman from Africa claims she is a victim of human trafficking that took her from The Gambia to Kuwait, where she was kept as a slave for years, and finally to Cleveland, where she managed to escape earlier this month.

At around 11pm on October 15, police in Cleveland were called to the corner of East 12th Street and Superior Avenue, where they were met by a 31-year-old woman, who appeared scared and told them she had just escaped from an apartment in the Reserve Square Apartments building.

According to an incident report, the woman told investigators she is a native of The Gambia who was sold to a family in Kuwait. 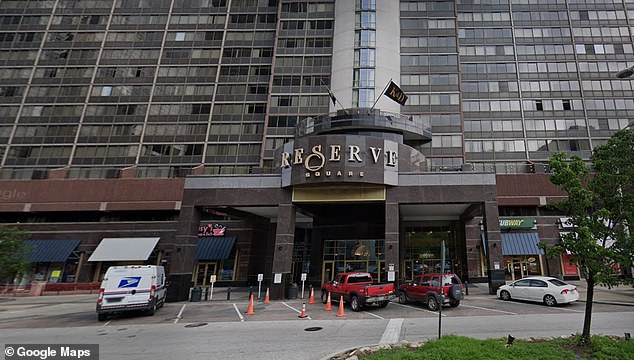 A 31-year-old native of The Gambia told police she had been kept as a slave by a Kuwaiti family for four years, including for three months inside this apartment building in Cleveland

She spent the next four years working for the family as a ‘laborer’ whose job it was to look after an ailing grandmother, according to the report obtained by .

On August 12, the family, accompanied by the woman, traveled from Kuwait to the US to seek treatment for their grandmother at the prestigious Cleveland Clinic.

The alleged trafficking victim told police that she never had a chance to escape because the Kuwaiti family locked her in her bedroom.

She also was prohibited from talking to anyone whenever they were outside together, reported

Three months into their stay in Ohio, the Gambian woman finally saw an opportunity to flee when the family went out one evening two weeks ago.

The woman found a phone and called a friend who gave her the number of a victim advocate in Arizona.

The advocate instructed her to leave the apartment and told her he would contact the National Human Trafficking Hotline and the police on her behalf, which he did.

She told the responding officers that she feared the Middle Eastern family and even her own family back in The Gambia would kill her.

A security guard at Reserve Square Apartments told Fox 8 that when he let police into the Kuwaiti family’s unit, it was found to be empty and smelling of hookah.

An investigation into the woman’s allegations of human trafficking is under way. So far, no arrests have been made and the Kuwaiti family have not been named.