Rescue workers are racing against time to save a toddler who has been trapped for more than 72 hours in a deep well in southern India.

Sujith Wilson, 2, fell down the deep well while playing near his home in Tiruchirappalli district of Tamil Nadu on Friday afternoon.

It is believed he initially fell a depth of around 30 feet, but has since slipped up to 100 feet into the abandoned well.

The toddler was unconscious but breathing until Sunday morning – rescuers have been unable to check on his condition since then. 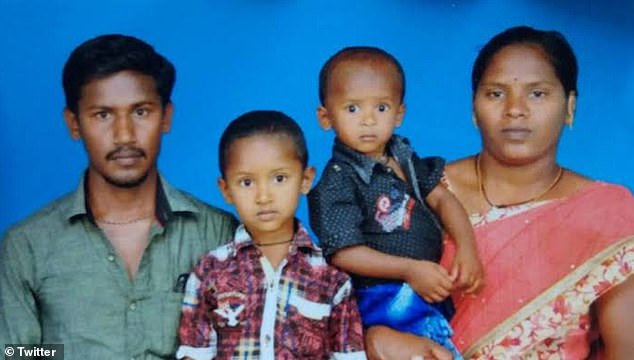 Sujith Taylor (right) appears in a family portrait with his mother, father and brother

Authorities said the child was wedged in a position about 30-feet deep when he first fell, before slipping in an upright standing position further into the well.

reports suggest the young boy is now stuck 100 feet into the well, posing an additional challenge to the rescuers who are struggling with both the depth of the well, and the rocky ground.

Initially, a thermal camera had been used to monitor the child’s body temperature while oxygen was supplied through a pipe.

In the from crew on the ground, 12 men have been reportedly picked to go down into the ground, by rope, in a new effort to reach the boy.

‘It’s a race against time,’ said Jawaharlal Nehru, a senior district officer at the site where rescue operations have entered the fourth day.

The firemen will go down a borewell, which has been drilled parallel to the one the boy is trapped in.

They be lowered, by rope, two at a time. While deep in the ground the men will assess the conditions and dig further in towards the area where the boy is thought to be.

The men will be carrying oxygen cylinders and tools to dig. Each pair will stay beneath the ground for 30 minutes before being pulled back up and replaced by another pair. 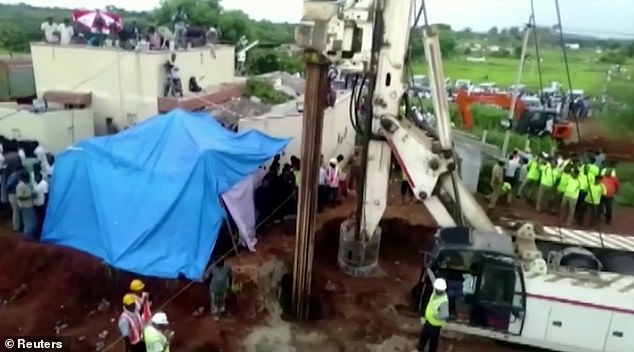 Efforts were made to dig a secondary well alongside the deep well the boy has fallen into., but the rig broke at around 33 feet in. The boy is thought to have slipped to a depth of 100 feet

Reporters on the scene say progress has been made on Monday evening, with workers breaking the half-way point of 50 feet, before the decision was made to send men down.

It is a sign of slow but steady progress in an operation that has faced several setbacks since the boy first became trapped.

Attempts to use robotic devices to lower ropes to latch onto the boy’s wrist failed on Saturday.

Workers used an oil drill to dig a hole parallel to the well on Sunday, but the rig broke down at around 33 feet deep because of the hard, rocky surface.

‘Even the high powered rigs have struggled to break through the rock,’ he said.

‘We have just reached about 40 feet and the work has not progressed as planned. We have sought an advanced drill bit from Chennai and it will come soon. That will be an ultimate attempt,’ he said. 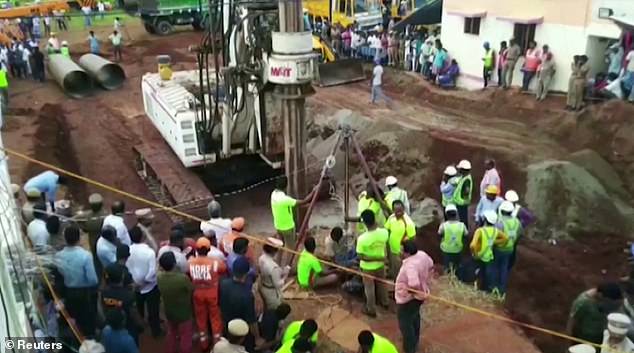 His mother, named by local media as Kalairani was seen stitching a cloth bag, which rescuers hoped to use to bring the toddler up out of the well.

Earlier, she had also been seen calling into the well for her boy, urging him not to cry.

Prime Minister Narendra Modi tweeted his concerns about the fate of the young boy after meeting with the rescuers.

‘My prayers are with the young and brave Sujith Wilson…Every effort is being made to ensure that he is safe,’ he said.

My prayers are with the young and brave Sujith Wilson. Spoke to CM regarding the rescue efforts underway to save Sujith. Every effort is being made to ensure that he is safe.

The incident is the latest in series of mishaps that have seen children accidentally fall into disused and uncovered wells in rural India.

In 2006 the rescue of a six-year-old child made headlines when he was recovered safely in Haryana state after being stuck in an 60-foot well for 48 hours.

Cristiano Ronaldo allegedly apologised to US model after rape in claim he denies
Peas and Carrots have made it to their new home at Virginia Tech
Trump explodes at GM over plan to close auto plants including one in politically critical Ohio
Miracle treatment or dangerous drug? Indonesian growers cash in on Kratom as it takes hold in the US
Doctor dragged off United flight breaks his silence two years later
Bloodied but unbowed, Our Lady of Paris saved by divine intervention writes ROBERT HARDMAN
Taylor Swift drops new single Calm Down that takes aim at haters
Robert Mueller's top prosecutor is hawking a book deal which could lift the lid on the probe