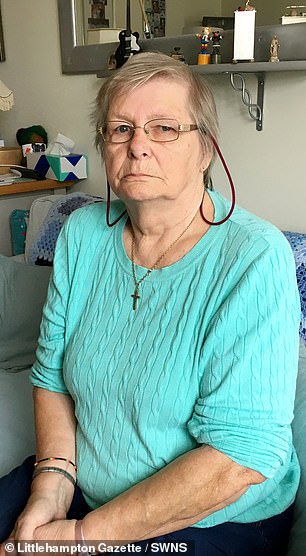 Sally Jones, 74, from Littlehampton West Sussex, matched with a man called ‘Harry’ on Match.com who turned out to be a fraudster living in Africa

A vulnerable great-grandmother searching for love was conned out of £8,000 by a romance fraudster she met on Match.com.

Sally Jones, 74, joined Match.com looking for somebody to play cards or ‘go to the pictures’ with after her partner of 23 years died in February 2014.

But her family was almost torn apart after she was tricked by a heartless fraudster she thought was ‘the best thing since sliced bread.’

She matched with a man called ‘Harry’ who had a profile picture of an Englishman holding a dog.

‘Harry’ began wooing her by sending chocolates, flowers and Champagne on her birthday.

Sally, of Littlehampton West Sussex, said: ‘I thought it was the best thing since sliced bread. Everyone wants to be loved.’

Over a two week period ‘Harry’ convinced Sally to send him almost £8,000 via Western Union which he claimed was for an operation and to replace a stolen passport and wallet.

He also told her to keep their online relationship a secret and avoided meeting her in person.

Sally lied to her family when they realised something was wrong until she made the devastating discovery ‘Harry’ was actually a fraudster living in Africa.

All her bank details, direct debits and phone numbers had to be changed and she stopped all contact with him.

She said: ‘I look back and think how stupid I was. They put it down to me still grieving. 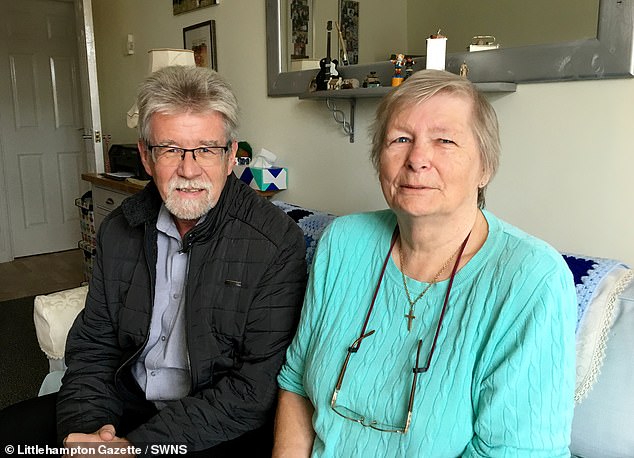 Over a two week period ‘Harry’, who she never met, convinced Sally to send him almost £8,000 via Western Union which he claimed was for an operation and to replace a stolen passport and wallet. Pictured: Ms Jones with Citizens Advice volunteer Ken Porter

‘If it seems too good to be true, it probably is.’

Sally underwent a year of counselling to overcome the trauma she suffered as a result of the romance fraud.

The great-grandmother is now determined to share her story in a bid to help others from facing the same fate.

Sally now gives talks about her ordeal, including at a recent anti-scam event by Arun & Chichester Citizens Advice.

She has also since completed a Spanish course and is studying psychology A-level in her home town.

Citizens Advice volunteer Ken Porter said: ‘I feel enormously privileged Sally is willing to share her story with us to help others avoid this heinous crime.’

TALK OF THE TOWN: Victoria Beckham won't be piling on the pounds
Soccer Aid 2019: Rita Ora puts on a very glam appearance ahead of her halftime performance
Fans gather for historic Italian version of football where punches and elbows are OK
Racegoers are dressed to the nines as they brave torrential downpours
How Brigitte Macron donned more than £14,500 in designer outfits to welcome G7 wives to France
Coronavirus: US death toll hits 11 with California's first fatality
Trump says if Biden were president China would own the US
Blue plaque honour for Winston Churchill's favourite spy Christine Granville