Boris Johnson’s hero, Winston Churchill, dealt with the pressures of leading the war effort by sinking into a hot bath with a glass of Pol Roger champagne. For the current Prime Minister, it is his 6am walks with Dilyn the dog and running sessions on a treadmill left behind by which give him the clarity of thought to try to deal with his multiple political dilemmas.

As summer gave way to the dawn chills of autumn, Mr Johnson abandoned his habit of wearing just a T-shirt and boxer shorts as he walked around the No 10 garden – in favour of the even more eccentric combination of swimming trunks and a hoodie.

Mr Johnson’s main political headache has remained intractably constant since he became Prime Minister in July: How to secure a deal with Brussels which could command the support of a majority of MPs. 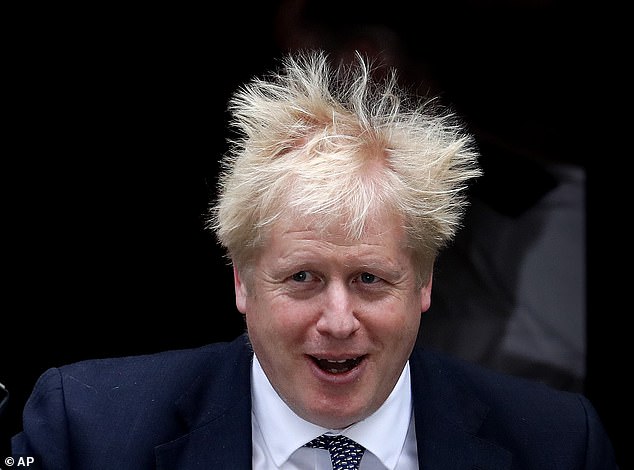 Boris Johnson’s hero, Winston Churchill, dealt with the pressures of leading the war effort by sinking into a hot bath with a glass of Pol Roger champagne

Last week’s dilemma – whether to break the Brexit deadlock by pushing for a pre-Christmas General Election – came against the backdrop of starkly contrasting advice from two rival camps of advisers and Ministers.

On one side are the One Nation moderates who want him to delay a poll until the spring to concentrate on passing his deal through the Commons. On the other is a group led by chief aide Dominic Cummings – dubbed the Suicide Squad by opponents – who want to keep pushing for a snap poll in December.

According to No 10 sources, Mr Johnson sits ‘Buddah-like’ as the ‘robust exchanges’ are conducted around him. One said: ‘He listens to all sides, chipping in, “Great idea, what about that”, and then waits to see if anyone comes back to counter it. If they do, he goes, “Oh gosh, yes, good point.” Then he usually sides with whatever Dom said.’

The aide added: ‘It’s not civil war. But these people are assertive characters, which is as it should be. There are obviously different views on how to get out of this. This is real roll-of-the-dice stuff. We are one bad move away from Corbyn having the nuclear codes so obviously these things have to be stress-tested’.

Mr Cummings, along with other veterans of the 2016 Vote Leave campaign, has argued that a quick ‘people versus Parliament’ Election during the imminent delay to Brexit would create the perfect conditions for a healthy Tory majority.

But the One Nation group – led by Northern Ireland Secretary Julian Smith and longstanding adviser Sir Eddie Lister – would rather delay an Election and let the deal go through the Commons even if it is ‘wrecked’ by pro-Remain amendments such as forcing the UK to stay in a customs union. They argue that as no Parliament can bind its successor, a future Tory Government could use its majority from the next Election to unpick any wrecking amendments.

A leading One Nation adviser claims the Suicide Squad has forced Mr Johnson to go against his ‘gut instinct’ to delay the Election until at least March – although Labour’s expected refusal to vote on tomorrow’s motion to trigger a poll means he is struggling to even control that decision.

Some colleagues say that making high-stakes decisions, under the long shadow of Theresa May’s 2017 Election fiasco, has left the normally ebullient Prime Minister seeming ‘distracted and subdued’. But aides who worked with Mr Johnson at City Hall counter: ‘As long as he is still laughing, he is OK. When the laughter stops, that is when you need to worry. 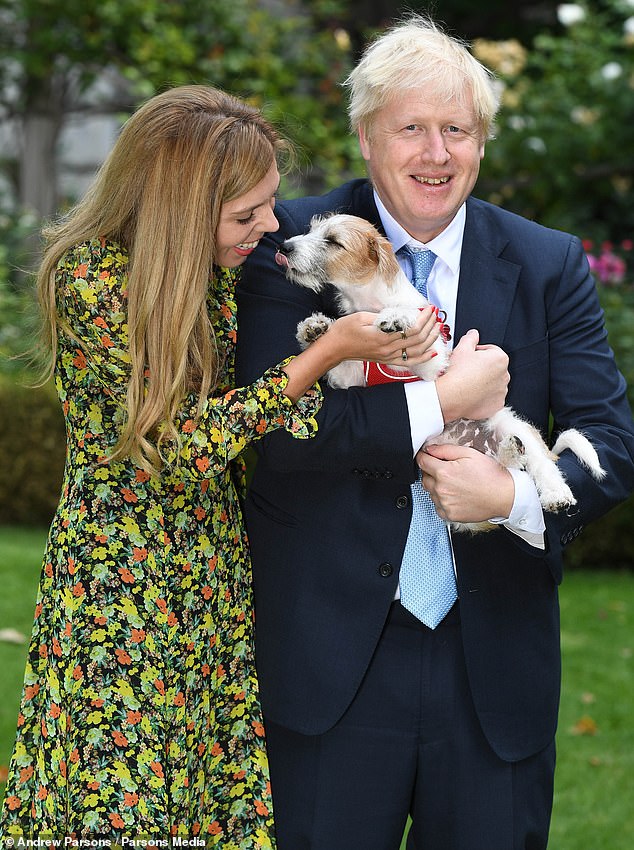 For the current Prime Minister, it is his 6am walks with Dilyn the dog and running sessions on a treadmill left behind by Theresa May which give him the clarity of thought to try to deal with his multiple political dilemmas

‘There is still laughter from Boris, but not as much as there was. He knows the enormity of the task he is facing.’

Another aide said: ‘Tigger has definitely lost his bounce… he is totally shattered after not having a proper day off since May.’ But Mr Johnson insists to friends he’s ‘full of beans’ and keen to get on the campaign trail to ‘stick it to Jeremy Corbyn’. Yesterday he was said to be in ‘particularly high spirits’ as he watched England defeat the All Blacks in the Rugby World Cup semi-final.

Mr Johnson has been warned by the One Nation moderates of the risk that if he holds a winter Election, Labour could take advantage of the expected flu crisis – the virus is sweeping Australia and heading for the UK – to savage the Government’s stewardship of the NHS. Pictures of homeless people ‘freezing on the streets’ could also be used to portray the party as ‘callous’.

Mr Johnson is understood to be particularly troubled by a lack of private data pointing to a likely Tory win in a December Election.

A One Nation source said: ‘There is not one piece of evidence to say where these extra seats will come from if we have a Christmas Election. Not one.

‘This is entirely the wrong strategy. Boris has been captured by Cummings. What we want is Boris the Statesman. He should be calmly but resolutely getting the deal through Parliament. This is the battle for Boris’s political soul – just as he wrote two newspaper articles, one backing Remain and one backing Leave, and only made his mind up at the last minute. That’s how he is.’

However, members of the Suicide Squad insist the Withdrawal Bill has to be ‘parked’ now to stop Remainers from wrecking it. One said: ‘Parliament will try to f*** up the Withdrawal Bill by amending it to include a customs union or second referendum. There may even be a move to dust off Theresa May’s deal and put that in.’ 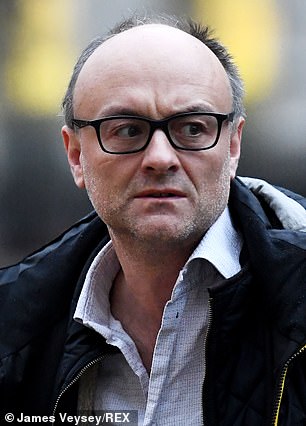 On Friday, Dominic Cummings told a meeting that the current crop of MPs was ‘the worst parliament in 400 years’ and insisted that the Government should not ‘be sucked into the morass of this zombie parliament’

The source suggested those attempts would have to come before the end of the week while John Bercow, who is due to quit as Speaker, was still in the Chair.

On Friday, Cummings told a meeting that the current crop of MPs was ‘the worst parliament in 400 years’ and insisted that the Government should not ‘be sucked into the morass of this zombie parliament’.

Despite Mr Johnson being in ‘constant text contact’ with Emmanuel Macron, hopes were last night fading that the French President would be able to force through just a short Brexit extension to the end of November.

No 10 hoped this would focus the minds of MPs back to a straight ‘Deal versus No Deal’ choice to scare them into passing the motion. ‘Even if we get a month, the Remainers will just make us extend again,’ said a Suicide Squad member. That is why we need an Election ASAP.’

Mr Johnson’s equanimity has also been tested by the fate of the 21 rebel Tory MPs who lost the whip after voting to block a No Deal Brexit. Up to 50 Tory MPs have made clear they will not vote for an Election until assurances have been given the 21 will be allowed back into the party.

There is also anger at Labour’s game-playing – which Mr Johnson lays at the door of Shadow Brexit Secretary Sir Keir Starmer, who No 10 believes is putting his own leadership ambitions before anything else.

One joke in Whitehall runs: ‘Why is Jeremy called LINO? He is leader in name only – and people walk all over him.’

A friend of the Prime Minister said: ‘He is frustrated by Labour’s lack of direction and inability to make a decision. Boris is appalled by just how weak Corbyn is. He clearly wants the Election but is being held hostage by his own party, mainly Keir. Labour’s got to come clean. Are they saying there must be no No Deal by January 31 or no No Deal ever? If it’s the latter, it basically means they are in favour of revoking Article 50.’

But the PM is at pains not to display his concerns. Addressing Tory peers in Parliament’s Moses Room last Wednesday, he compared himself to the biblical hero, concluding with a cry to ‘Let my people go!’

Throughout the drama, his girlfriend Carrie Symonds is said to have given ‘rock-solid support’. A source said: ‘Every evening he makes a point of going through everything in his day with her and she keeps him feeling upbeat.’

Mr Johnson has also stuck to his ‘do or dry’ pledge to give up booze until the UK is out of the EU, although some friends think he might benefit from ‘a glass or two’ to wind down.

Time to bring out the Pol Roger?