As a kid, Atlanta-based DJ Ohso was told that ‘girls don’t DJ.’ As an adult, she was dismissed by members of the boys’ club, told that she was only booking gigs because she’s cute, not because she’s talented.

But the 33-year-old didn’t let it stop her from playing music, and now she’s entertaining clubs packed to capacity, with fans that line up outside before the doors even open — and she’s catering to the women who show up, not men.

Every month, she hosts a female-focused dance party called Bounce Dat, where women can dance and let loose without worrying about aggressive guys — in fact, guys can only get in if they’re invited by women. 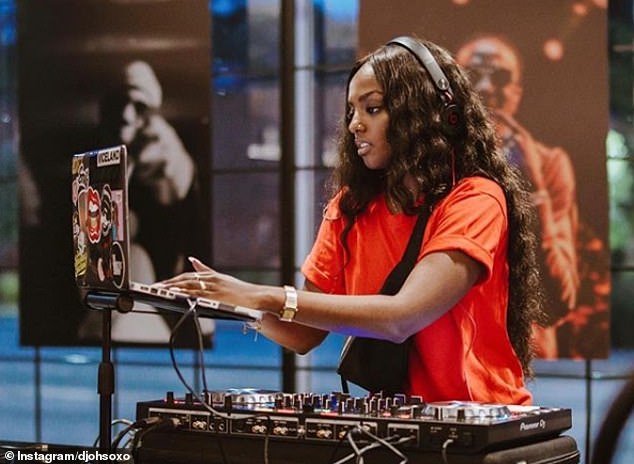 Rising to the top! DJ Ohso has earned success and popularity — despite being told as a teen that ‘girls don’t DJ 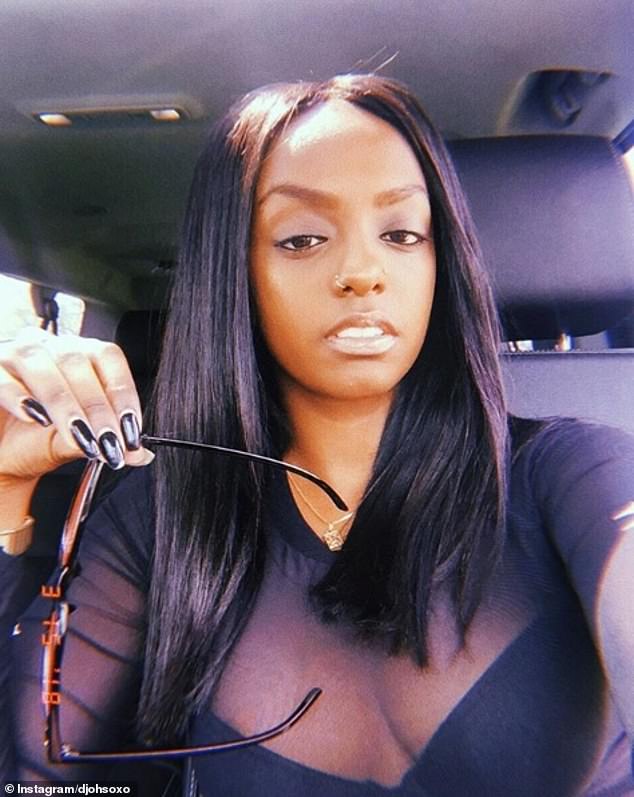 That’s talent! The 33-year-old Toronto native quit her job at 26 to peruse her dream, and within weeks of landing in Miami she was booking gigs 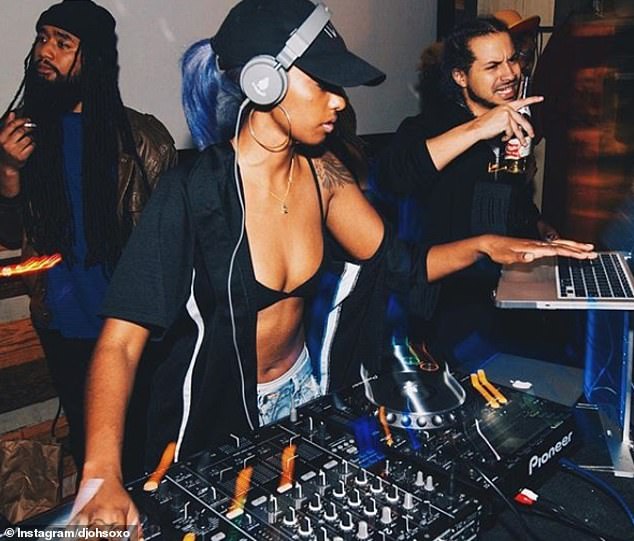 Ladies’ night! She now hosts a popular dance party in Atlanta called Bounce Dat, where she caters to a female crowd — and men can only get in with an invite

One could say Ohso’s girl power event is decades in the making, given that she was nearly excluded from the DJ scene because she’s female.

When she was 13, she snuck out to see a concert and saw a DJ for the first time — and was hooked. She came home and told her mother that that’s what she wanted to do.

‘I’m African, so I’m super obedient,’ Ohso told DailyMail.com. ‘Our parents came from Canada to the US to give us a better life — so you naturally suppress your wants as a kid to live this dream for your parents.

‘So I suppressed it and never thought about it again until I was in my 20s and sat next to a DJ who showed me how to use turntable. He showed me how to mix two songs together and I fell in love.

‘I never turned back,’ she went on. ‘I went and got my own equipment and practiced every day.’

One day when she was 26, she was watching a compilation of Will Smith videos and was struck by something the star said about not having a Plan B, because ‘it distracts from plan A.’

At that, she quit her job to focus on DJing full time.

‘I like to call my life a beautiful accident. I had no idea what I was doing, I just knew I wanted to DJ for a living,’ she said. 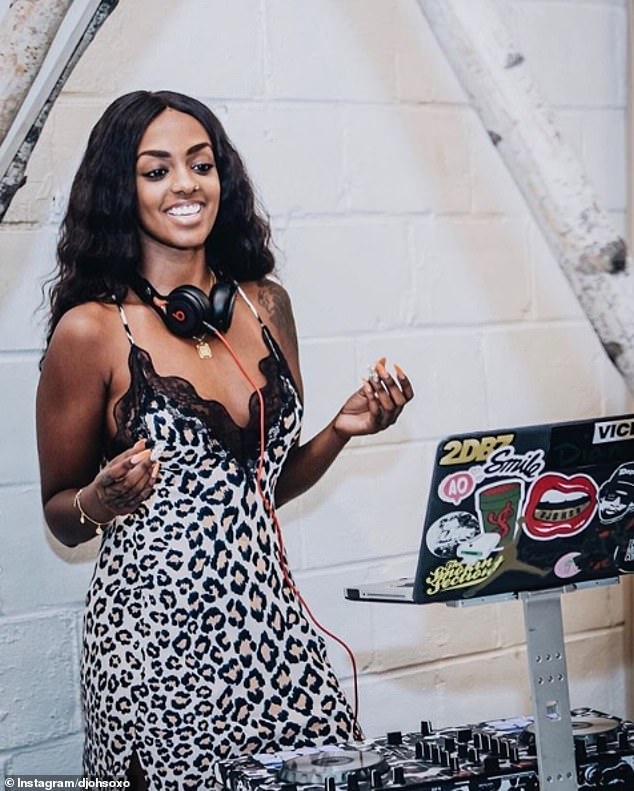 Double threat: Ohso told DailyMail.com that she’s faced sexism in her career, including from guys who insist that she’s only found work because she’s pretty 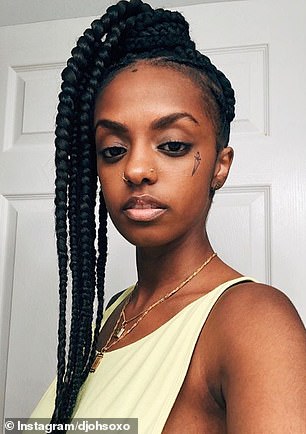 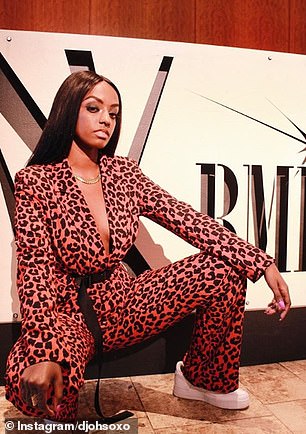 ‘It’s not like only men can do this because they have a special part of the brain that can do it,’ she said

In her hometown of Toronto, she was told she’d have to pay her dues and perform without pay for three years Instead. she packed her bags, booked an Airbnb, and moved to Miami.

‘I said, this is gonna be my one shot. If this doesn’t work out, this isn’t for me,’ she said.

A week after she moved, she met someone who booked her for a party — and everything changed.

I felt like a circus act at the beginning. People would have their phones out, like, ‘Look at this girl who DJs!’

‘I’m thinking I’m gonna open up because he’s never seen me play before, and he’s like no, I’ll let you go at 1am. I had all this anxiety, like, there’s gonna be people there! I was so scared, oh my god,’ she said.

More nerve-racking, she learned Will Smith was there — the very star who set her on this path.

‘I damn near blacked out,’ she said. ‘But during my set I played Motown Philly and he was in the middle of the dance floor jamming.’

She took it as a sign that she was on the right path.

‘Of all the places he could be, he was in Miami at the club I was DJing for the first time,’ she said.

But there were obstacles — namely, men who tried to make her feel like she didn’t belong. 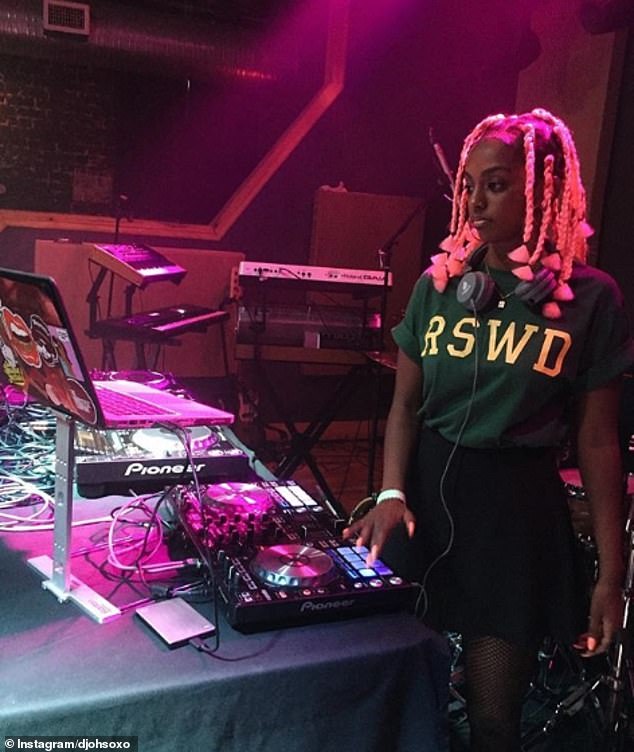 Success story: Ohso says Will Smith was at the first gig she booked in Miami — a dream come true, since he inspired her to go after her dream 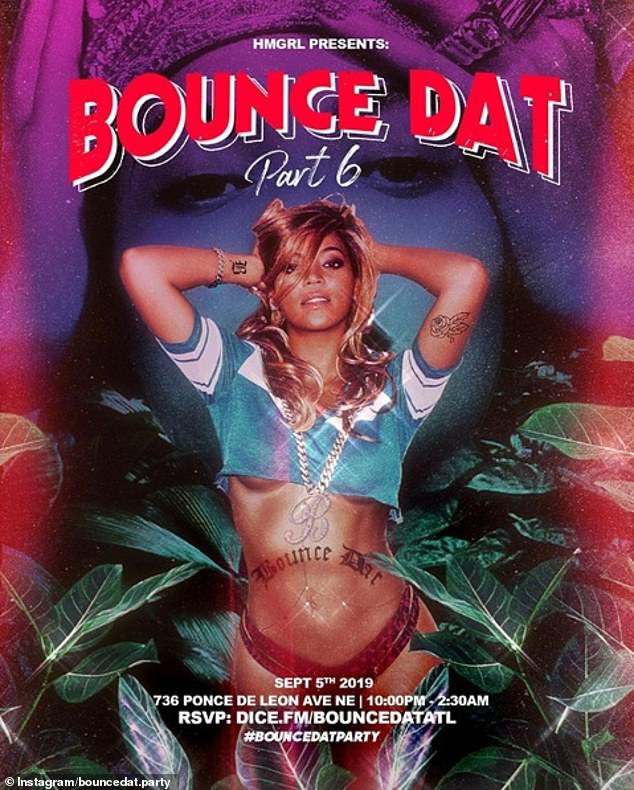 Living it up! Her Bounce Dat parties are n incredibly popular, with women lining up before the club even opens — and dancing as soon as they walk in the door

‘I would have people come up to me at the DJ booth and be like, “Hey, this area is only for the DJ,” she said. ‘I felt like a circus act at the beginning. People would have their phones out, like, “Look at this girl who DJs!”‘

But she stuck to it, adamant that there was no reason men should keep her out.

‘It’s not like only men can do this because they have a special part of the brain that can do it,’ she said. 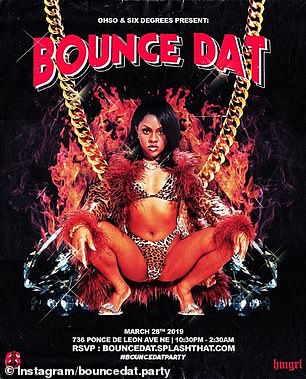 Chill: The party is a place where women can dance and let loose without worrying about getting hit on or making guys angry

Even now, sexist men tell her that she only gets opportunities because she’s a girl, saying, ‘You’re only getting booked because you’re cute.’

‘I’ve been in group conversations with male DJs that have made me feel small,’ she said. ‘It’s so offensive and insulting.’

She’s kept going, though, and now hosts a monthly club night called Bounce Dat. Women are the guests of honor, and men can only get in with an invite.

Ohso plays music that caters to the female crowd, and there’s even a beauty bar with a nail station, a baby hair station, and a temporary face tattoo station.

Most importantly, though, it’s a place for women to go and unwind where they don’t have to worry about their safety or men who can’t take a hint.

‘If you have a long day and you want to go out, you don’t want to then deal with men trying to grab you, trying to dance with you,’ she said.

‘I would have girls’ nights [with friends] at the house and we would be listening to music and dancing and have it not be this sexual thing and I was like, “Why can’t we have this anywhere?” I don’t want to feel like I can only do this in my house. 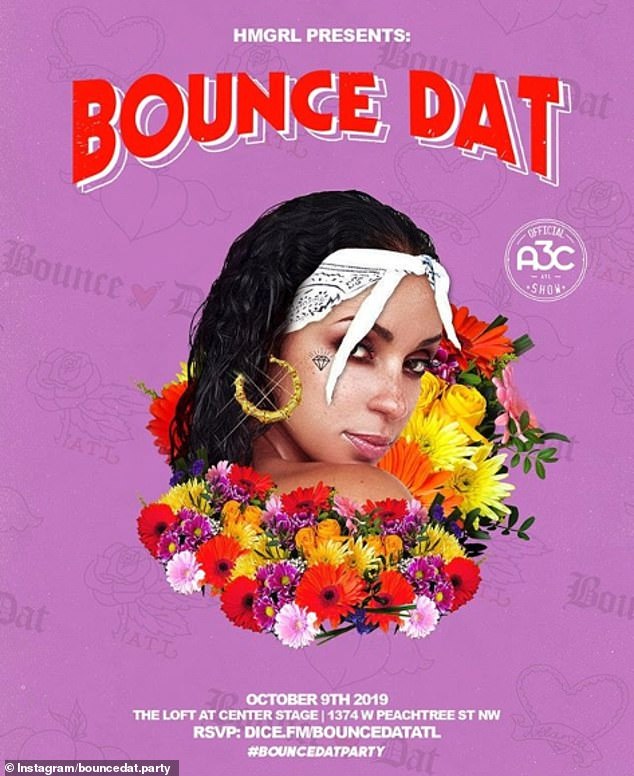 Girl power: Ohso plays music that caters to the female crowd, and there’s even a beauty bar with a nail station, a baby hair station, and a temporary face tattoo station 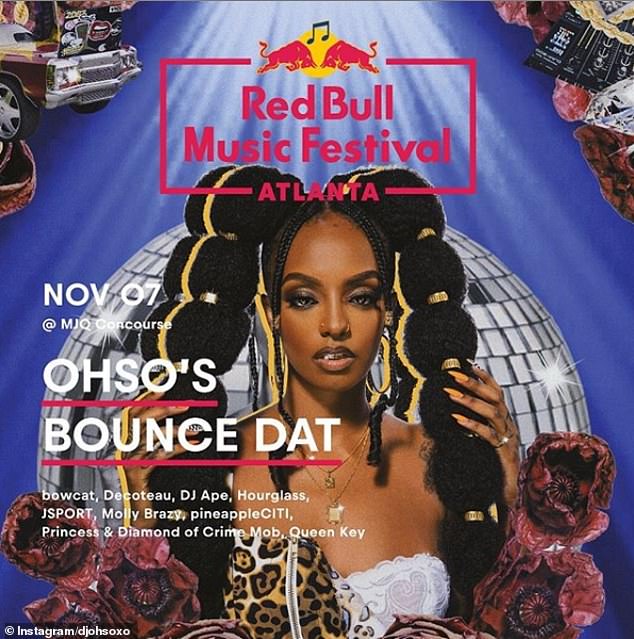 ‘I should be able to go out and feel comfortable and safe, and not encounter men who are gonna be upset if I don’t wanna dance with them.

The idea has proven incredibly popular, with women lining up before the club even opens — and dancing as soon as they walk in the door. Ohso says her first event hit capacity in just a half hour, with another 100 people waiting outside. 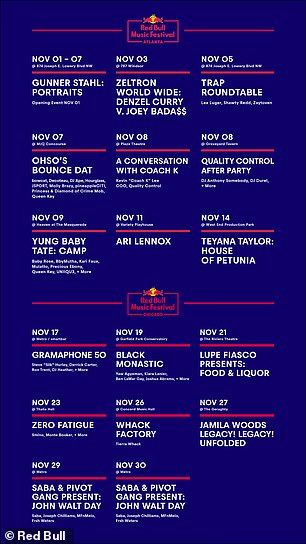 Schedule: Other acts at the festival, which will run from November 1-15, include Teyana Taylor, Ari Lennox, and Yung Baby Tate. The Atlanta festival will be followed by another one in Chicago

The events are total love fests, with women supporting other women — including one who recently performed the entire dance routine to a Beyoncé song in the middle of the dance floor as others circled around her.

Of course, there’s still that pesky problem of sexism. Ohso said some men are upset about her party, accusing her of discriminating against men while attacking her online.

‘[They’re] literally proving why we have to have a space like that,’ she said. ‘We’re just trying to have one night a month for women to celebrate themselves, why does it have to be about you?’

Next up for Ohso is the , where she’ll host a special party at MJQ nightclub on November 7 — with special guests like Princess and Diamond of Crime Mob, Molly Brazy, Queen Key, and pineappleCITI.

She has big plans for the night, including a photobooth where models will feel guests grapes and fan them.

Other acts at the festival, which will run from November 1-15, include Teyana Taylor, Ari Lennox, and Yung Baby Tate.

The Atlanta festival will be followed by another one in Chicago from November 17-30 with acts like Lupe Fiasco, Tierra Whack, and Smino’s Zero Fatigue.

Trump will not be at John McCain's funeral after the president repeatedly bashed the ailing senator
Which? reveals five ways to save on car hire
Maggie Gyllenhaal BACKS James Franco after Busy Philips accused him of assaulting her
Nancy Pelosi accuses Trump of WANTING to be impeached
Victim's mom voices anger at Kim Kardashian for trying to get son's murderer set free from prison
One dead and eight hospitalized in hotel hazmat incident
Dad of 'affluenza teen' is charged with assault and after 'choking his girlfriend'
PG&E asks customers infuriated by three planned power shut offs this week not to SHOOT at employ...